6 features that set the 787 Dreamliner apart from the rest

Articles
Charlie Page is a senior first officer on the Boeing 787 Dreamliner with over 10,000 hours of flying experience, both around Europe on the A320 family and worldwide on the B787. He is also a freelance writer, contributing to a range of print and online publications.
Sept. 07, 2019
•
11 min read 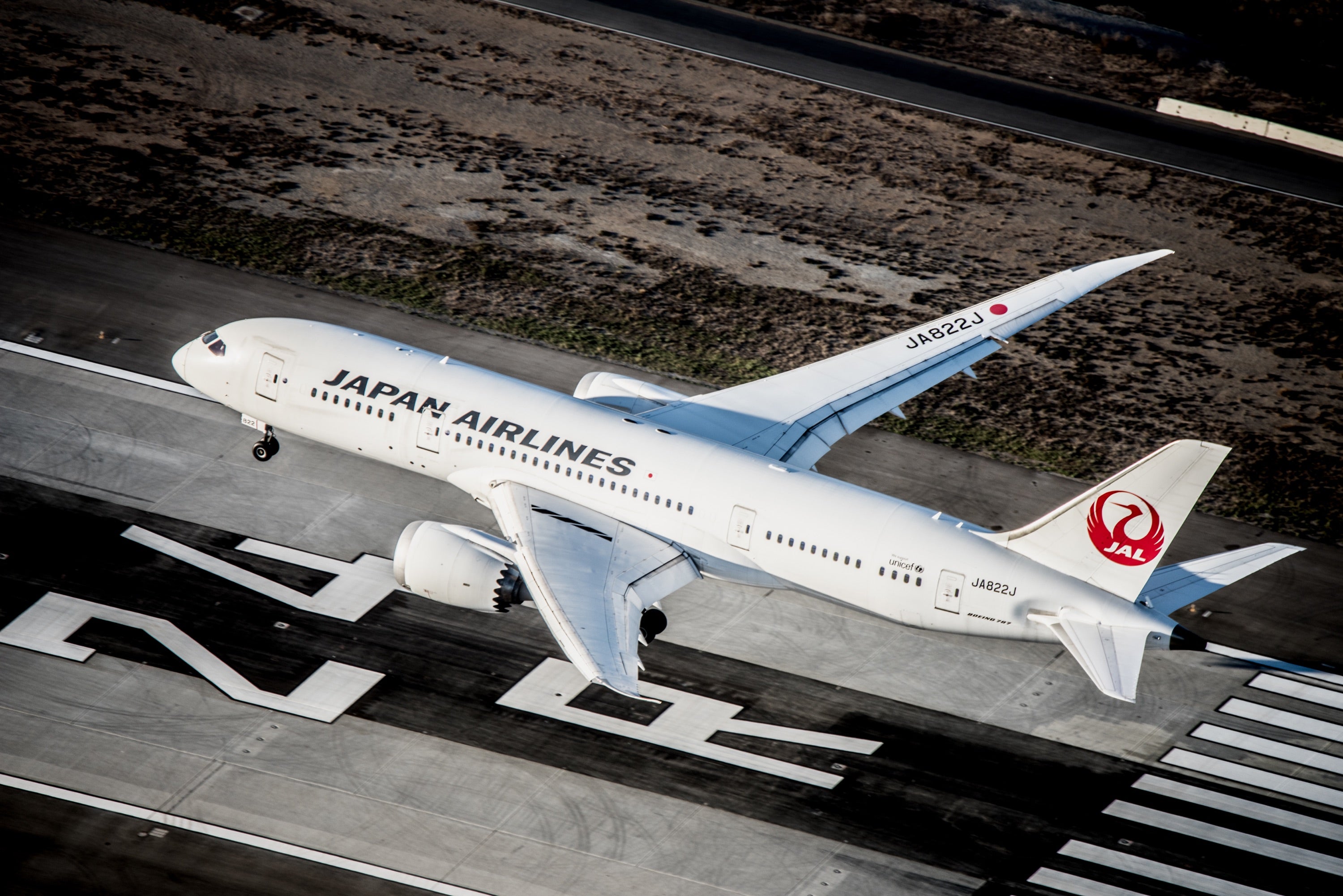 The Boeing 787 Dreamliner has revolutionized flying for both passengers and pilots. Taking a leap into the future from its predecessors, the designers incorporated a number of new features that make the Dreamliner one of the most fuel efficient and comfortable aircraft in the skies.

In the cabin, fresher, cleaner air means that you arrive at your destination less weary from the journey and dimmable windows enable you to still see out whilst the cabin remains dark. The gust suppression system also ensures that your flight is less bumpy than most other aircraft types, helping you to rest easy.

In flight deck, a head-up display increases the pilots' situational awareness and specially designed surfaces on the wings make the aircraft more fuel efficient. With greater use of electrical systems, there is less use of the hydraulics systems, reducing weight and thus increasing fuel efficiency.

Fresh air from outside

Most conventional aircraft types, such as the Boeing 777 and the Airbus A350, use bleed air to pressurize the cabin. As part of the engine operation, some air is 'bled' out of the high pressure compression stage and then into the air conditioning system. This air is then used to pressurize the aircraft and keep the cabin at a comfortable temperature. However, on the Dreamliner, things are different.

Instead of taking air from the engines, fresh air is drawn in directly from outside the aircraft, forward of the engines, by two dedicated inlets. From here, the air is fed to four electrically powered Cabin Air Compressors (CACs). Here, it is pressurized and sent to two air conditioning packs — L Pack and R Pack in the diagram below. The packs are responsible for conditioning the air to a certain temperature and humidity and then sending it toward the cabin.

The green flow lines show that even with one pack inoperative, there is enough air flow from the other pack to maintain a normal flow of air into the aircraft.

Not only does this mean that inside the cabin the air is of much better quality, it also means that there are savings to be made externally. As high pressure air in the engines is not feeding the air conditioning system, all of it can be used to generate thrust. This means that the engines are not wasting airflow, making them much more fuel efficient and thus reducing carbon emissions.

For more on this, check out my previous article, how aircraft are designed to keep you comfortable at 37,000 feet.

Bagging a window seat and taking in the views as you traverse the globe is one of the joys of air travel. However, the joy can be short-lived when everyone else is trying to sleep and you're the only one allowing light to stream into the cabin. Either close the window and lose the views or leave it open and risk having your seat kicked for the next 12 hours.

However, when flying on the 787, you get the best of both worlds. Instead of having conventional pull down blinds, the windows on the Dreamliner have a special mid-layer, which can be dimmed by the use of a switch.

Using electrochromic technology, an electrical current is passed through a transparent gel which contains minerals capable of generating color. When the passenger presses the button to darken the window, the current increases and this causes the gel to darken. It's not an all-or-nothing action, either. By adjusting the tint to the desired amount, the passenger can stop sunlight from streaming into the cabin whilst still being able to see out of the window.

As air passes over the wings and tail of an aircraft, at some point, the smooth flow of air breaks away from the surface and becomes turbulent. This turbulent air creates drag, slowing the aircraft down, requiring more power from the engines to drive it forwards. The more power needed from the engines, the more fuel is needed.

The holy grail for aerodynamics engineers is to create what is known as 'laminar flow', where, in this case, the air would flow perfectly parallel over the surfaces, without breaking away and causing that drag.

The 787-9 is the first aircraft to be fitted with hybrid laminar flow control (HLFC), which is a feature of the tail-fin and the horizontal stabilizer beneath it. By using a special suction system, the air flowing over these surfaces remains in a smooth parallel flow for much longer, greatly reducing the drag created.

Part of learning to fly a jet aircraft is mastering the ability to flick between scanning the vital flight parameters such as altitude and speed inside the flight deck and viewing the visual picture outside the aircraft. During an approach, a pilot's eyes will constantly be darting between the two. However, for a while now, technology has existed in military aircraft that allows pilots to continue scanning the flight parameters whilst still looking outside — it's called a Head Up Display, or HUD. A projector is fixed to the ceiling above the pilot's head and from it projects an image of the Primary Flight Display (PFD) onto a piece of glass on front of the plot's face.

Whilst this feature is great during most stages of flight, it really comes into its own on the approach and landing. Some approaches require pilots to fly tight turns very close to the ground, often in marginal weather conditions. The approach to runway 13L at New York's JFK airport is a great example of this. When we fly this approach, we need to keep our eyes on the runway just as much as we can. The HUD enables us to do this whilst still scanning our altitude and airspeed as we fly the tight turn around the corner, as can be seen in the video taken in the simulator below.

We've all been there. Just as the meal service starts, the bumps begin. As you try to take a sip of your red wine, a jolt forces the glass against your chin and the contents of your glass into your lap. For most people, turbulence is just an inconvenience, for others it's a real fear.

Turbulence is caused by variations in the wind speed and direction hitting the aircraft and affecting the lift over the wings. An increase in wind speed creates more lift, a decrease created less lift. Multiply this hundreds of times a second and you get what you experience as turbulence.

All this information is sent to central processing computers, which, in a fraction of a second, calculate not only what is happening to the aircraft but also what needs to be done to counteract those movements. The computers then send electrical signals to the actuators powers the control surfaces on the wings and tail to counteract the forces the aircraft is experiencing.

The result is that as the aircraft instantly reacts to the turbulence-creating forces, the bumps that you feel in your seat are dampened out and feel much less than they would on another aircraft type.

Stopping a 200-tonne aircraft landing at 160 mph requires a lot of braking force and to do this, the 787 has eight wheels on the main gear assembly — each of which has a brake unit. On other aircraft types, the brake units are powered by the hydraulics system. An electrical signal is sent from the flight deck to hydraulic actuators near the main landing gear. Here, hydraulic fluid at 3000psi is used to force the brake unit against the wheel, thus slowing it down.

This system works fine, but the pipes and actuators that form this part of the hydraulic system come at a considerable weight cost. Extra weight means more fuel burn, which in turn increases costs and carbon emissions. What if the brakes could be powered a different way?

That's the case on the Dreamliner. Designers did away with the use of the hydraulic system and all its associated architecture and instead used electricity to power the brakes. When the pilots press on the brake pedals, an electrical signal is sent directly to the brake unit on the wheel. Here, electrically powered actuators are used to press the carbon brake disc against the wheel, slowing it down.

By changing to electric brakes, a 787-8 saves 141 pounds (64 kilograms) per aircraft and a 787-9 saves 244 pounds (111 kilograms). The brakes are also known as 'Plug and Play' because electrical wiring replaces the traditional hydraulics and it's much easier and quicker to change the brake units when needed. Smart features also allow engineers to monitor the brake performance more closely, giving a real-time measurement of wear on the carbon disks.

The anti-icing system, too, is powered electrically. Other aircraft types use bleed air from the engines to pass hot air through the leading edge of the wing to stop ice from forming. This hot air then vents out into the atmosphere through dedicated hot air exhaust holes. Like with the air conditioning system above, this requires power to be sapped from the engine resulting in a greater fuel burn.

The 787 uses a series of electrically heated blankets that are bonded to the inside of the leading edge structure. The heating of these blankets is enough to melt any ice forming on the wing. This system is far more effective, using around half the power that a traditional bleed system would use.

In addition, because there are no bleed air exhaust holes, drag over the wing and generated noise are reduced, making the Dreamliner not only more fuel efficient but also quieter.

The 787 Dreamliner really has changed flying for passengers, pilots and airlines alike. Even though you may not have not noticed it, there are several small differences that all add up to making it one of the best aircraft to fly long-haul on. It's also far better for the environment, using 20% less fuel compared to similar aircraft types.

The changes to the cabin environment mean that passengers arrive more refreshed and less fatigued from their journey, and the guest suppression system will help ease the worries of nervous flyers. In the flight deck, the HUD provides pilots with a fantastic new way to interact with the aircraft, increasing situational awareness and, as a result, safety.