Articles
Barbara Schultz When she's not writing about travel or music, Bay Area-based journalist Barbara Schultz edits books for niche and travel publishers, such as Avalon Travel. A devoted mom of two teenagers (and one rescue dog), Barbara also gets excited about finding traditional music where it lives and, strangely, packing.
Follow
June 05, 2019
•
10 min read 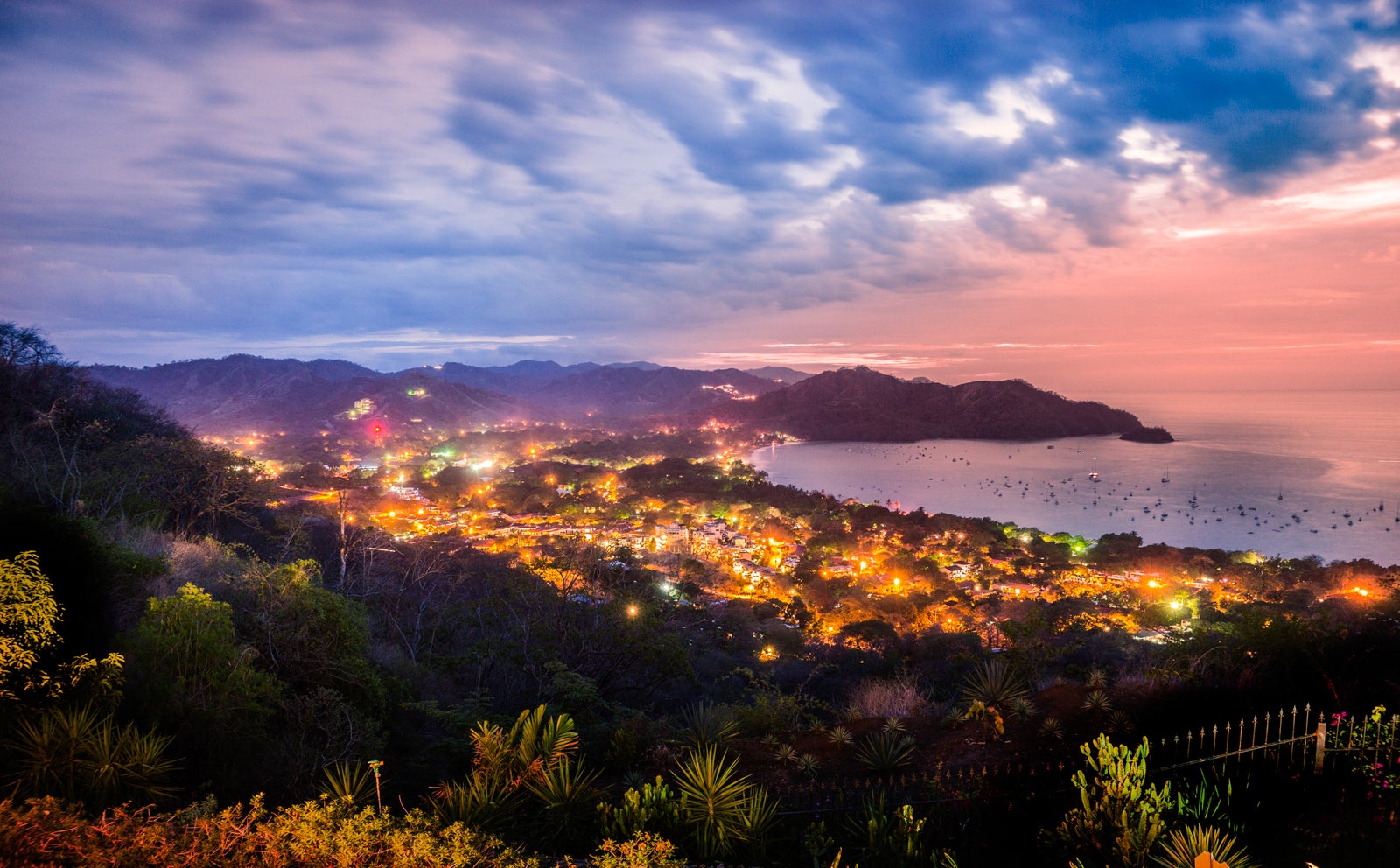 The tourism industry is booming in Costa Rica with more than 2 million tourists per year, thanks in large part to ecotourism. Costa Rica’s tropical climate and abundance of nature parks offer nonstop opportunities for forest and volcano hikes, ziplining excursions, wildlife viewing, beach time and more. Still, you’ll want to be informed before deciding what time of year is best to get the most from Costa Rica’s attractions and culture.

Here’s some advice for choosing the right time to visit:

The Best Weather in Costa Rica

Costa Rica’s tropical climate is warm year-round. The country harbors a number of microclimates that differ from each other in terms of temperature and rainfall, but temperatures don’t vary wildly within them. The average temperature for the country overall only fluctuates between the high 70s and low 80s; it’s the rain that's most likely to impact your travel plans.

Costa Ricans see their year as divided between two seasons: high season (the dry season, December to April) and green season (rainy season, May to November). Although some parts of the country, such as the Arenal Volcano region, have slight variations. The Cordillera Central mountains, on the Caribbean side, also face dry season in September and October, which is when most of the other regions see the majority of the rain. This makes the green season the perfect time to explore Cahuita National Park or the Tree of Life Wildlife Rescue Center.

For the majority of the country, high season is a great time for beach goers, while green season is the perfect opportunity for surfers and white water rafting.

Arenal Volcano and the surrounding Arenal Volcano National Park in the center of the country are among Costa Rica’s most compelling sights. Until 2010, the volcano was considered one of the 10 most active volcanoes in the world, with molten rocks and ash emanating from the summit daily. Smoke and ash are still visible but no lava has erupted in recent years. The volcano is surrounded by lush forests laced with hiking trails, thermal hot springs and beautiful Lake Arenal.

The period of May through November sees the least precipitation at the volcano, so trails will be less slippery and temperatures should be pleasantly warm — usually in the mid-80s. Many consider this the best time to visit. (On the other hand, there are those who would say that there is no bad weather — only inappropriate clothing — and the most dramatic time to see the volcano is when clouds are on the move.)

The Best Time to See Wildlife in Costa Rica

The best time to see wildlife in Costa Rica is really all of the time. This country’s nature reserves are full of monkeys, birds, wild cats, amphibians, etc. If you want to see sloths, there’s a whole sloth sanctuary for that.

One of the experiences you may want to time carefully, however, is a visit to Tortuguero National Park (Place of Turtles). Also known as the “Little Amazon” of Costa Rica, this is where you can observe sea turtles nesting. Leatherback turtles nest on Tortuguero between March and May, while green sea turtles nest between July and October. In November, nesting is over but the babies may be seen hatching.

Ecotourism companies will take families on boating and kayaking excursions to see turtles nesting on the beach — from a respectful distance, of course.

Costa Rica’s tropical climate allows for outdoor festivals to take place throughout most of the year. Starting on the second Thursday of January and lasting for two weeks, Las Fiestas Palmares is filled with concerts, dances, parades and bullfights. Here you'll also see "The Tope," otherwise known as a horse parade. This festival is located in the small city of Palmares which is situated between Alejuala and San Ramon and is a must see event.

Typically at the end of February, you have the Puntarenas Carnival, which draws an international audience with fireworks, a horse parade, dancing, a regatta and a championship volleyball tournament. This is an extremely popular festival where tourists will be able to get a real understanding of the local culture.

March events include an oxcarts parade in San Antonio de Escazu; religious festivals honoring St. Joseph and San Isidro; and, during the last two weeks of the month (sometimes stretching into April), the International Festival of Arts in San Jose and beyond. The IFA is staged by the Department of Culture & Youth of Costa Rica and features top artists and performers from all over the world.

In July, Virgin of the Sea Festival in Puntarenas features parades music, dances and fireworks. Costa Ricans from all over the country attend this event, making hotel rooms hard to come by.

Costa Rican Independence Day is September 15, when a torch symbolizing freedom is carried from Nicaragua to Cartago by relay runners. Celebrations for this event are of the home-grown variety, featuring parades of school children dressed in traditional costumes.

At Christmas time, the marketplace of the Zapote district in San Jose is transformed into a holiday fairground, with rides for kids, food stalls, bloodless bullfights and fireworks. On the second Saturday of December, for the Festival de la Luz (Festival of Lights), San Jose holds a parade where thousands of cars decorated with Christmas lights travel along the Paseo Colon and Avenida 2.

When to Visit to Avoid Crowds

Those who don’t mind rainy afternoons will be rewarded in the green season with quiet trails, cooler temperatures and dramatic scenery. It’s a trade-off for sure as dry weather makes it easier to get around and quite possibly get to experience more activities. But even during the rainy season (May–November), most of Costa Rica doesn’t receive days of constant rain; it’s more common for mornings to be calm and afternoons to be rainy. So, embracing Costa Rica’s rainy season may result in a truly special experience.

During this time, you'll also find lower prices for accommodations, tours and flights.

Costa Rica’s tourism website breaks down the average fares from several US cities to San Jose in low and high season. During Costa Rica’s rainy season, prices range from just under $400 round-trip from Miami to about $700 for San Francisco-based travelers. In contrast, fares during the dry season rise to $520 round-trip from Miami all the way up to $800 from San Francisco.

There are also two international airports in Costa Rica — San Jose (SJO) and Liberia (LIR). Typically flights to San Jose are slightly less expensive and offer more routes from the United States. But depending on where you are visiting in the country, you'll want to fly into the closer airport to avoid an extremely long car ride to your destination.

Related: Earn the Southwest Companion Pass to Fly 2-for-1

Affordable Hotels in the Capital

Costa Rica’s capital city of San Jose is home to several family-friendly hotels that you can book with points. Kids eat free at the Holiday Inn San Jose Escazu, which offers rooms with two queen beds along with Wi-Fi, a fitness center and a pool (from 15,000 IHG Rewards Club points/night). The Holiday Inn San Jose Express San Forum has two-double-bed rooms and similar amenities, plus free breakfast (also from 15,000 points/night). This is a great opportunity to redeem your IHG points.

At the Hyatt Place San Jose/Pinares, two-queen rooms with sofa bed are available for 5,000 World of Hyatt point/night; there’s a pool, free Wi-Fi and free breakfast for World of Hyatt members.

Hilton offers a range of accommodations, including the upscale Gran Hotel Costa Rica, Curio Collection by Hilton, which is built into a historic building in the heart of the city, and close to monuments and attractions. This hotel offers two-double-bed rooms and requires between 48,000–60,000 Hilton Honors points per night. More affordable options are the Hilton Garden Inn San Jose La Sabana (entertainment district) and Doubletree by Hilton Hotel Cariari San Jose (closer to the airport), both offering two-double rooms at properties with pools and on-site restaurants for around 30,000 Hilton Honors points per night. The Doubletree has a much larger pool and adds free shuttle service to/from Juan Santamaria International Airport (SJO).

Marriott loyalists can choose between the Courtyard San Jose Escazu (two-queen rooms, free Wi-Fi for members, from 12,500 points per night) and the higher-end Costa Rica Marriott Hotel Hacienda Belen (from 25,000 points per night). The latter is located outside the city on a coffee plantation, where guests have access to a driving range, tennis, parks, a pool, on-site dining and spa facilities.

If Costa Rica is on your radar, these guidelines will help you plan out the best time to visit this beautiful country. With many activities, sights and events throughout the year, there really is no bad time to visit Costa Rica.