The best time to cruise the Mediterranean

Articles
Melinda Crow is a Texas-based freelance writer and guidebook author. From camping to cruising, she's been writing about travel for 30-plus years. Her first cruise was on Carnival’s second ship, Carnivale. She prefers shore excursions involving history, wine or wildlife.
Sept. 24, 2022
•
10 min read 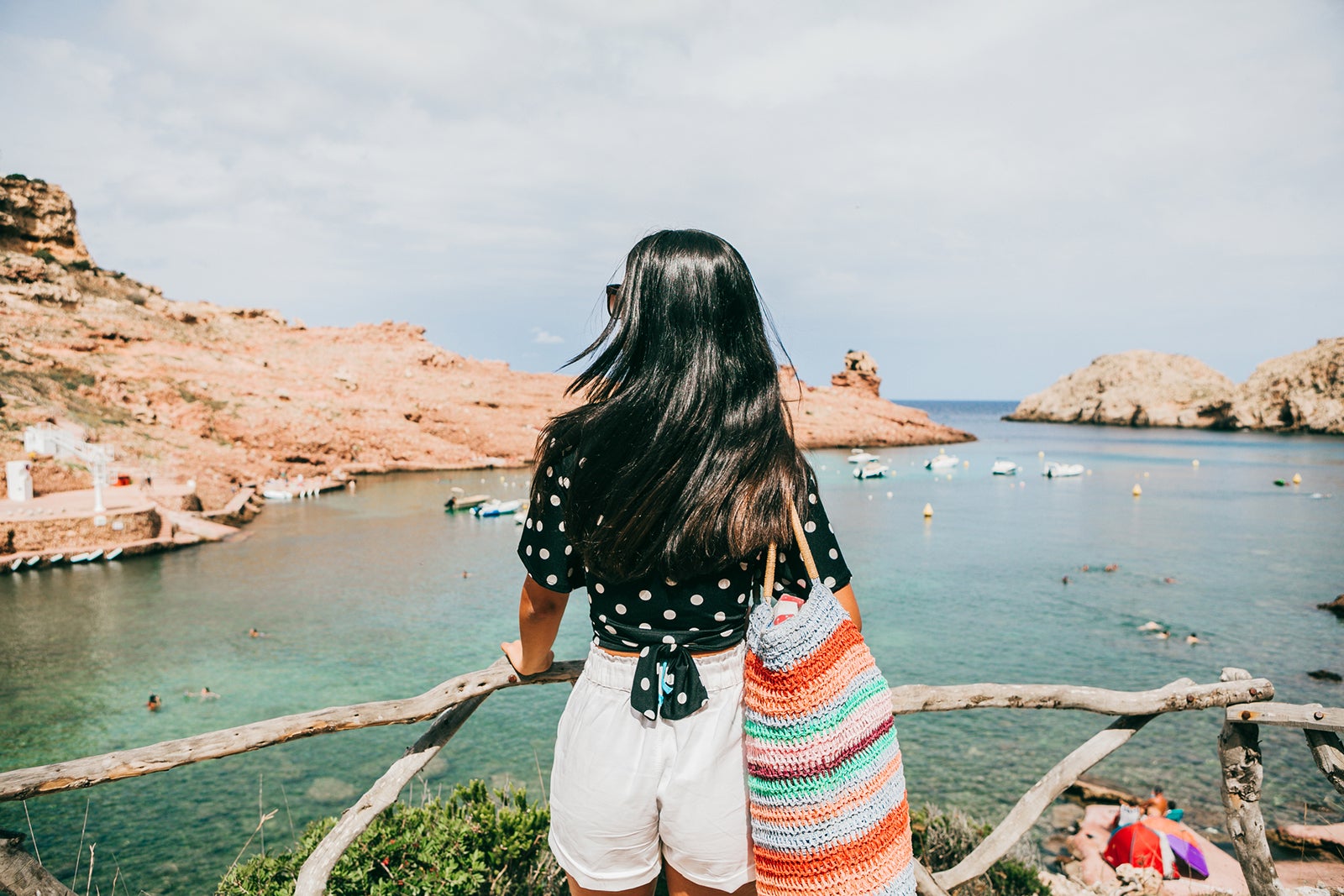 You might think the best time to cruise the Mediterranean would be summer because that's when the most ships are cruising in Europe. But I’d argue that other times of year are better.

You'll find ships cruising in the Med year-round, so there’s never a time when you can’t cruise at all. You’ll find the most ships and itinerary choices in summer during peak season and the fewest during winter’s off season. Spring and fall are considered the shoulder season, when the Mediterranean cruise season is gearing up or winding down.

Taking into account price, weather and crowds, plus choices of ships and ports, I believe the best time to cruise the Mediterranean is during the shoulder season. Specifically, I prefer April. As your decision might be based on entirely different factors, let's dive into the variables to determine the best time for you to head to the region and hop on a cruise ship.

The Mediterranean Sea consists of 11 smaller seas. Shopping for Mediterranean cruises can be confusing because some cruise lines like to label their itineraries according to the smaller sea names.

You might find cruises to the Adriatic, between Italy's east coast and the central European countries of Slovenia, Croatia, Montenegro and Albania; these will take you to ports such as Venice, Italy, and Dubrovnik, Croatia. Aegean cruises traverse the large open sea between Greece and Turkey and go as far south as Crete, with stops in Athens and Santorini in Greece and Istanbul in Turkey. Sailings through the Ionian Sea, located between the sole of Italy's boot and western Greece, bring you to the Italian island of Sicily and the Greek island of Corfu.

Related: Best Mediterranean cruises for every type of traveler

Cruise lines that sail the region all year include Viking, MSC Cruises, Costa, Celestyal and Norwegian Cruise Line. But while you might be able to cruise the Mediterranean in winter, your choice of ports is somewhat limited. We found no sailings to the popular ports of Corfu, Dubrovnik or Koper, Slovenia in December or January.

Most of the winter offerings cruise the western ports of Italy, plus France, and westward to Barcelona. There are a handful of longer sailings that sail from Athens or include Istanbul, western Turkey, Israel and even Alexandria, Egypt. Among popular cruise lines, only Viking includes stops in Santorini in winter, and only Costa offers cruises that include Venice in the winter. Norwegian's winter Mediterranean itineraries are focused on Spain and Portugal.

By June, the choice of cruise lines and itineraries is at its peak. Among the mainstream lines, only Carnival Cruise Line is still absent in June, opting instead to sail a short season of 10-and 11-night cruises in September and October.

Most ships stay in Europe through summer before beginning a global dispersion between October and November. Disney Cruise Line is the first to leave, with its last summer Mediterranean sailing usually falling in July. Celebrity is among the last to leave, often continuing its Mediterranean cruises well into December and even January, incorporating the holiday season.

If your dream is to see Venice or Santorini, or to cruise with one of the mainstream lines, you can rule out winter but should find ample choices between March and October. By the end of November, the number of ships calling at Mediterranean ports has dropped to winter levels.

If your ideal Mediterranean cruise doesn't include crowds, winter is a good choice, other than December holiday weeks. But most travelers will prefer a little more warmth and a larger choice of ports while still prioritizing a good price and lighter crowds.

Across the board, from mainstream to luxury, Mediterranean cruise fares peak in June, July and August. Prices for big-ship cruises varied by as much as $60 per person per night between spring sailings and summer. On luxury lines like Silversea, spring cruise fares were hundreds of dollars cheaper per person per night compared to summer fares. March sees an upward tick in rates due to spring break travel. The best deals we found outside of winter fell in April and November.

To decide what crowds would look like in various months, we looked at two popular ports where the effect of multiple ships is felt the most -- Santorini and Venice. Visit Santorini in June or July and you will find yourself fighting for breathing room among as many as 15,000 other cruise ship passengers.

Compare that with an April or November stop there, where the daily cruise passenger load tops out around 3,000. We found days in April where only one or two mid-sized ships were scheduled to be in port.

I've been to Santorini when four mid-sized ships (approximately 5,000 passengers) were in port and found it challenging to walk through the narrow maze of shops, restaurants and hotels. It was crowded enough that I was concerned about returning to the ship on time because the lines at the cable car that takes cruise passengers down the cliffs to the tender dock were so long. With 15,000 people in port, I don’t know how you'd be able to walk through town at all. Santorini is a good-sized island, but most of the things cruisers want to see are perched on the narrow rim of the cliffs.

Venice has recently cut back on its cruise tourism capacity, in part by forcing some ships to dock in alternate ports and bring guests to the city by bus. We included passenger counts from Trieste, Ravenna and Venice and found June numbers as high as 6,000 passengers arriving, but as low as 4,000. Cruise passenger arrivals in April are typically below 3,000 per day. The numbers are lower than Santorini — but then, Venice has a far more complicated crowd control scenario.

If avoiding high prices and crowd congestion is your priority, rule out summer months and stick with either winter or the shoulder seasons of spring and fall.

The best time to cruise the Med based on weather

Temperatures remain moderate across most of the Mediterranean year-round, but even Istanbul can be chilly, with an average high temperature of 48 degrees in January. Athens, Rome, Barcelona and most of the Greek islands see temperatures in the mid- to upper-50s in December and January, warming slightly in February.

Summer temperatures can be brutal in the larger cities. Athens reaches 90 degrees and higher on a regular basis in July and August. Rome and Barcelona average roughly 2 degrees cooler than that in the summer.

Rain is more common across the Mediterranean in October and November than most other months, but the average monthly rainfall, even in the fall, is three inches or less. The northern ports in the Adriatic see a bit more rain than most of the Med. Don’t forget the famed Acqua Alta, or mega-tides in Venice, which will leave you sloshing through St. Mark’s Square in rubber boots. Though a genuinely rare occurrence, the high tides are most likely to happen in November and December, making them a concern when booking a cruise on one of the handful of ships with November stops in Venice.

If chilly, hot or wet weather are deciding factors for your Mediterranean cruise, rule out January, February and December for the chill, July and August for the heat, and October, November and December for rain and tides. That leaves March, April, May, June and September as the best weather months for cruising in the Mediterranean.

Related: When is the best time to book a cruise?

Everyone has their own reasoning for the timing of a cruise. Yours might include traveling while school is out or maximizing time at the beach. Perhaps you are loyal to one particular cruise line or have your heart set on cruising on a newly launched ship.

Whatever your reasons, there is not a bad time to cruise the Mediterranean. My favorite is April for the confluence of reasonable fares, pleasant weather, manageable crowds and an abundance of itinerary and ship choices, but I have loved sailings in other months as well.

My advice is simple: Even if I think shoulder-season months are the best time to cruise the Mediterranean, go when it works best for you and your travel partners. Because a dream cruise in Europe, even with less-than-ideal weather or annoying crowds, is better than no cruise at all.

Featured image by CAROL YEPES/GETTY IMAGES
Editorial disclaimer: Opinions expressed here are the author’s alone, not those of any bank, credit card issuer, airline or hotel chain, and have not been reviewed, approved or otherwise endorsed by any of these entities.