Articles
Gene Sloan has written about cruising for more than 25 years and for many years oversaw USA Today’s award-winning cruise site. He’s sailed on more than 150 ships.
Follow
May 14, 2022
•
12 min read 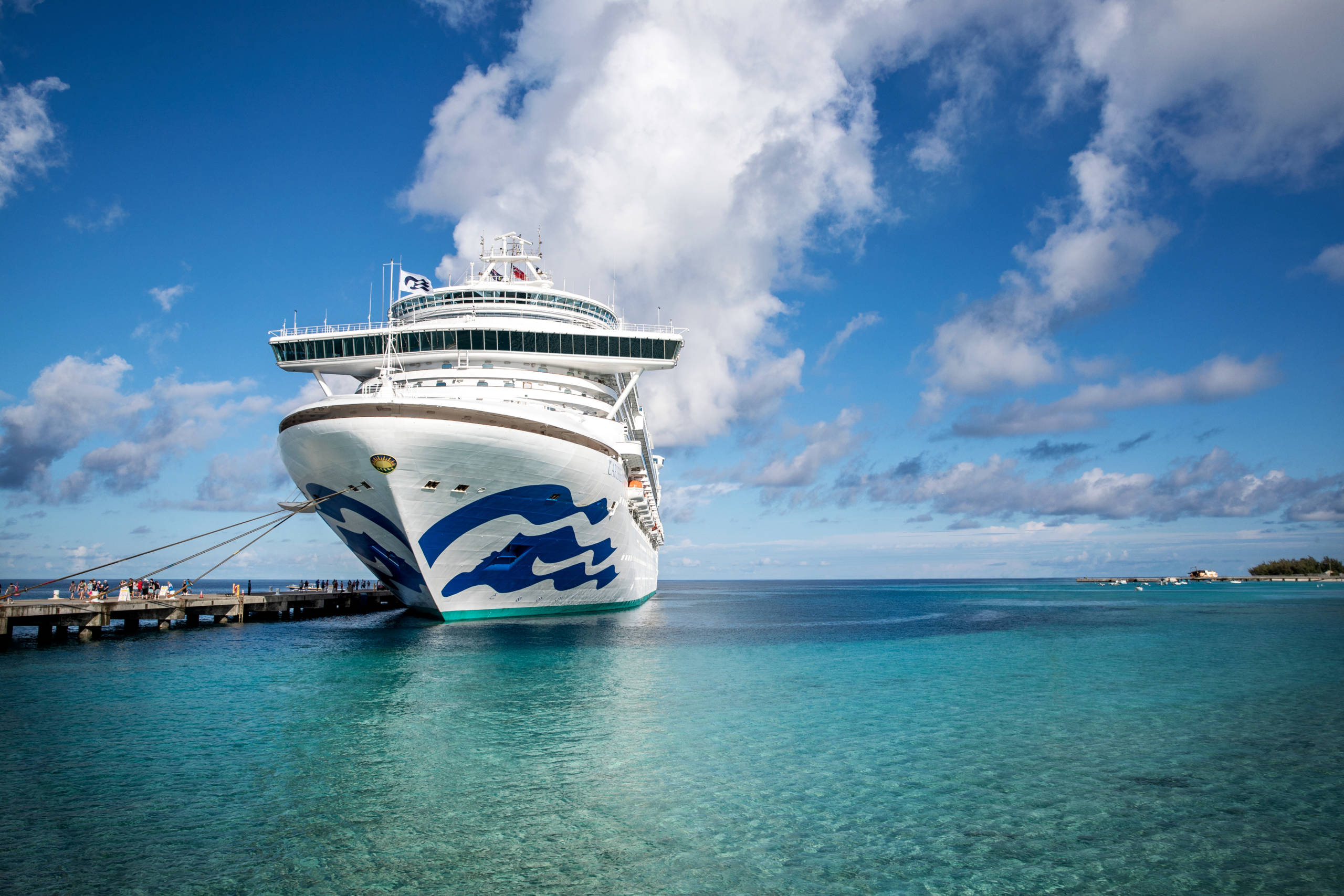 Call it the big-ship cruise line for the country-counting crowd.

Among the world’s five biggest cruise brands, all of which operate big, mass-market vessels, Princess Cruises offers the most diverse array of itineraries (more than 170 in a typical year) with stops in more than 100 countries and on all seven continents.

Despite having just 15 vessels, the California-based line’s ships visit more than 330 different ports and destinations in a typical year and bring travelers to a whopping 100-plus UNESCO World Heritage Sites.

Still, the line’s heaviest presence by far is in Europe, Alaska, and Australia. In a typical summer, Princess Cruises will deploy at least four or five of its 15 vessels to Europe while sending another five or six to Alaska (these numbers were higher just a couple of years ago, before the line downsized significantly during the pandemic). That leaves just a few vessels for other destinations such as the Caribbean, New England and Japan.

During a typical winter, Princess will move around half a dozen of these ships to the Caribbean but also send several to Australia. It will also operate sailings in South America and along the Mexican Riviera.

Among the line’s voyages, you’ll find everything from three-day sampler cruises along the West Coast of the U.S. to 111-day around-the-world voyages.

With so many options, what are the best Princess cruise destinations you can visit? Here are TPG's top five.

Some of Princess’s most popular itineraries are in Europe, where the line traditionally has been a significant player. It has deployed as many as eight vessels to the continent from spring to fall in recent years, making Europe one of its biggest focuses for more than half the year.

The itineraries that Princess offers in Europe are wide-ranging, with a diverse set of routings in both the Mediterranean as well as across Northern Europe.

In the Mediterranean, the line offers everything from seven- to 24-night voyages that offer the chance to see such iconic destinations as Barcelona, Spain; Rome, Florence and Venice, Italy; the island of Santorini in Greece; and Kotor, Montenegro, in a single cruise.

Some Princess cruises in the Mediterranean also include visits to Istanbul and Kusadasi in Turkey (the latter a gateway to the famed ruins of Ephesus), and Haifa and Ashdod in Israel (for visits to Jerusalem and other iconic destinations in the country).

In Northern Europe, Princess will take you to such well-known Baltic cities as Stockholm; Tallinn, Estonia; Helsinki; and St. Petersburg, Russia, in a single sailing. (Note that Princess has removed St. Petersburg from Baltic cruises for 2022 due to the war in Ukraine.) There also are itineraries that will bring you to Iceland, Greenland and the Norwegian fjords.

Among the longest itineraries Princess offers in Europe is a 28-day “Baltic and Icelandic Fjords Medley” trip out of Southampton, England, that combines it all with stops in Denmark, Sweden, Estonia, Latvia, Lithuania, Russia, Poland, Norway and Iceland. Note that whether the next departure of this itinerary, scheduled for June 28, 2023, includes St. Petersburg will likely depend on how the war with Ukraine evolves. The stop currently remains on the schedule.

In the Mediterranean, the line’s hubs are Barcelona, Civitavecchia (the port for Rome) in Italy and Piraeus (the port for Athens) in Greece.

Caribbean and The Bahamas

You usually won’t find a single Princess ship in the Caribbean and the Bahamas over the summer, when the line turns its focus to sailings in Europe and Alaska. But come winter, it’ll reposition quite a few of its vessels to the Caribbean and Bahamas sailings, making these warm-weather Princess cruise destinations a top choice.

For the coming winter, for instance, it currently has six of its 15 vessels scheduled to sail in the regions — including two of its newest and biggest ships, the 3,660-passenger Sky Princess and 3,660-passenger Enchanted Princess.

If you’re looking for something short, the line has you covered in the form of quick, four- and five-night trips to the Bahamas or Mexico. But it’s best known for longer sailings. These include lots of seven-night itineraries to the Eastern Caribbean and Western Caribbean but also a large number of even longer, 10- to 14-night Caribbean voyages.

The latter trips offer the chance to see a broader mix of Caribbean islands than is typical on Caribbean sailings.

Related: Everything to know about Princess cabins and suites

Perhaps the best destination you can visit on a Princess ship is Alaska. That's because Princess is particularly known for cruises to the 49th state, where it dominates the market for cruises along with sister line Holland America. In recent years, Princess has deployed as many as seven or eight ships to Alaska in the summer — far more than most other lines. Even after its recent downsizing, Princess is likely to continue to send at least five or six ships to the region each summer.

Princess also operates its own wilderness lodges in Alaska, as well as tourist trains and buses. It uses the lodges, trains and buses to offer an extensive range of 10- to 17-night Alaska “cruisetours” that combine a cruise with land-based touring.

The Alaska cruise season is a short one, lasting roughly from May to September. For 2022, Princess has deployed six ships to the Alaska market:

The appeal of the one-way sailings on Grand Princess, Majestic Princess and Royal Princess is that they can be combined with the stays in Princess’s lodges mentioned above to create the longer Alaska “cruisetours” that combine a one-way cruise with a land tour.

Princess has been sending multiple ships to Australia every winter for many years, offering a wide range of itineraries out of Sydney, Brisbane, Fremantle (the port for Perth), Adelaide and Melbourne that make calls not just around Australia but also in New Zealand.

The itineraries in the region that the line offers vary in length from just two nights to 28 nights. But the shorter voyages primarily are aimed at a local Australian crowd looking for a quick getaway. Among North Americans, the most popular itineraries are the longer ones, which often are heavily skewed to stops in New Zealand.

A 17-night New Zealand itinerary out of Adelaide brings calls at Auckland, Tauranga, Napier, Wellington and Dunedin, as well as scenic cruising at New Zealand’s Fiordland National Park. In addition, it includes stops in Melbourne, Australia.

For 2022, Princess plans to have just three of its vessels in the Australia and New Zealand region at least part of the year — an abnormally low number that is the result of the slow restart to cruising in the region in the wake of the COVID-19 pandemic. The line currently plans to send four and six vessels to the region in 2023 and 2024, respectively.

In 2013, Princess became the first major international cruise brand to offer an extended season of voyages around Japan, and it remains a leader in Japan-focused cruises. If you're thinking about cruising to the island nation, Princess should top the list of lines to consider.

Princess typically sends one or two ships to Japan every year for an extended season that often lasts from March to November. It offers a wide mix of itineraries around the country ranging in length from five to 19 nights.

The longer trips on the schedule deliver vacationers to such iconic Japanese destinations as Nagasaki and temple-filled Kyoto (via the port of Osaka) as well as such lesser-known ports as Tokushima and Miyako. The itineraries typically include at least one stop in South Korea or Taiwan, and they sometimes include a visit to a Russian port such as Vladivostok.

Princess typically deploys its 2,670-passenger Diamond Princess to Japan — an 18-year-old ship that has a distinctly Japanese flavor, thanks to a massive makeover in 2014. The makeover brought the addition of an extensive traditional Japanese bath area — a first for a cruise ship — as well as a sushi restaurant. Menus in Diamond Princess’s main restaurants and buffet feature Japanese items such as miso soup and noodles alongside Western fare.

Diamond Princess originally was updated with Japanese-style design and amenities specifically to lure Japanese vacationers to its Japan sailings. But the around-Japan voyages have proven popular with Americans and Australians, too. You’ll usually find a mix of Japanese, American and Australian travelers on the line’s longer Japan sailings.

Princess cruises to destinations around the world, and offers a wide range of itineraries from the Caribbean to Asia. You’ll find the most choices among Princess itineraries in Europe, Alaska and Australia. The line also is well-known for voyages to Japan. Its special focus on Japan sailings, with a ship retrofitted with Japanese design, in particular, is something that sets it apart from other big lines.

Related stories
6 credit card perks you can gift for the holidays
Flying Blue introduces an interactive map with entry award rates, officially adds stopovers: What you need to know
Man overboard: Cruise ship overboards and how they happen
Winners and losers in JetBlue's revamped loyalty program
Featured image by Mark Katzman
Editorial disclaimer: Opinions expressed here are the author’s alone, not those of any bank, credit card issuer, airline or hotel chain, and have not been reviewed, approved or otherwise endorsed by any of these entities.

Our points-obsessed staff uses a plethora of credit cards on a daily basis. If anyone on our team wouldn’t recommend it to a friend or a family member, we wouldn’t recommend it on The Points Guy either. Our opinions are our own, and have not been reviewed, approved, or endorsed by our advertising partners.
See all best card offers
Related stories
Guide
6 credit card perks you can gift for the holidays
News
Flying Blue introduces an interactive map with entry award rates, officially adds stopovers: What you need to know
Guide
Man overboard: Cruise ship overboards and how they happen
News
Winners and losers in JetBlue's revamped loyalty program