Articles
Devorah Lev-Tov is a contributing writer to TPG and TPG Family, as well as Travel + Leisure, Afar, Robb Report and The New York Times. She lives in Brooklyn with her husband and young son and travels everywhere from Bolivia to Hong Kong to Tel Aviv.
Follow
Sept. 09, 2019
•
8 min read 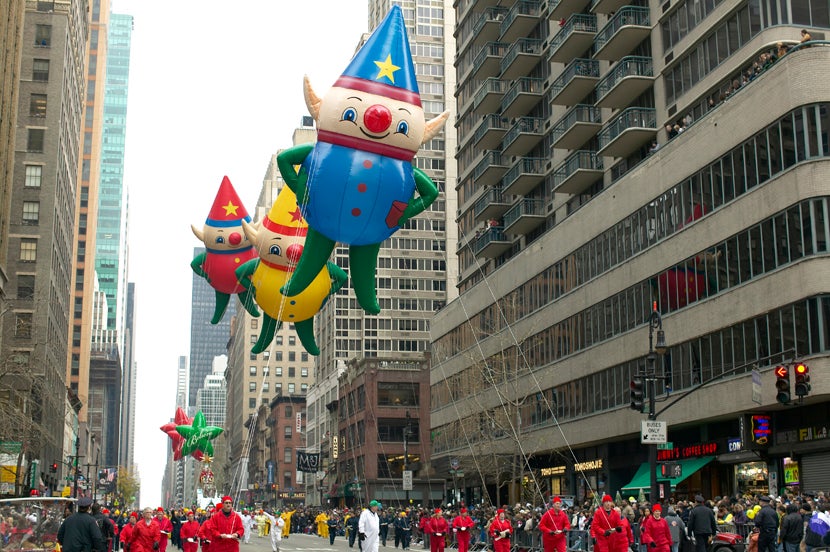 Watching the Macy's Thanksgiving Day Parade is part of many families' Turkey Day traditions. But why watch it on TV when you can see it in person? And no, we're not suggesting you stand in the cold for hours fighting selfie stick-wielding tourists just for a glimpse of Snoopy. Instead, watch the floats from the plush confines of a strategically placed hotel room.

The parade route travels south along Central Park West from 77th Street to Columbus Circle, heads east to Sixth Avenue and then south until it reaches its final destination: the Macy's flagship on 34th Street. The route just happens to be lined with some of Manhattan's most luxurious hotels.

Note that some hotels we mention here are still bookable on points, but you likely won't get a room with a view of the parade route since nearly every hotel is selling special Thanksgiving Day Parade packages. If you want a guarantee that you'll end up in one of the suites or standard rooms with a view of the parade, you'll need to seek out these seasonal packages and pay cash. Of course, even if you don't have a room with a view, these hotels are well located to enjoy the festivities at street level.

Here are eight suites offering up-close-and-personal views of the balloon floats and other parade festivities.

The Ritz-Carlton New York, Central Park (a Category 8 Marriott property with redemptions starting at 85,000 points/night) has a prime location -- Sixth Avenue and Central Park South -- that translates into incredible parade views. To really treat yourself, book one of the hotel's Memorable Suite Experiences (starting at $995 per night) and stay in a luxury suite. Or forge your own parade-watching experience by booking a Park View Corner Suite.

The hotel offers a variety of Thanksgiving packages that include nightly accommodations, an instant film camera with enough film for 20 photos and a commemorative welcome gift. Pricing, which ranges from $2,395–$4,595 per night, is dependent on which type of parade view accommodations you choose. The rooms with regular and "premium" parade views include Avenue View Rooms, Avenue View Suites, Park View Suites and Premier Park View Suites. (Book a suite with a premium parade view and you'll get a second welcome gift plus a $250 credit at La Prairie Spa).

If money is no object, the hotel comes to the table with its $25,000-per-night Specialty Suite package that raises the bar with club lounge access, an in-suite personal photographer session for one hour and a Thanksgiving brunch for up to eight people in the Royal Suite, the Presidential Suite or the Artists’ Gate Suite.

This upscale yet artsy hotel, a member of Hilton Grand Vacations, is on the corner of 57th Street and Sixth Avenue. Book an 850-square-foot Terrace Premier Suite on the 17th floor, which features glass doors that open to a 450-square-foot furnished terrace — the perfect perch for a bird's-eye view of Central Park and Sixth Avenue. Inside, there's an elegant living and dining area, a king-size Duxiana bed outfitted in Sferra linens and a glass-enclosed wet room with a rain shower with a multi-jet system with five spray patterns and a deep-soaking bathtub. There's a sleeper sofa in the living room and the suite accommodates three people. This hotel has limited Standard Room Rewards in the Hilton Honors program.

From its perch on 58th Street and Sixth Avenue, this eco-conscious luxury boutique hotel offers top-notch parade-watching points from its Sixth Avenue–facing rooms. We suggest the Greenhouse Suite, a 1,200-square-foot nature-inspired retreat with two bedrooms and two-and-a-half baths, or a City or Park (view) suite. Book through its 1 of a Kind Access promo for suites with guaranteed views of the parade (two-night minimum; must include Nov. 27 and 28). Or make a brunch reservation at the hotel's restaurant, Jams, located on the ground floor with parade views.

This behemoth hotel on Sixth Avenue between 53rd and 54th streets has myriad possibilities for parade views, thanks to its 47 floors and nearly 2,000 rooms. Partial parade view rooms start at $599 a night while unobstructed views can be had starting at $799 per night. For the most lavish experience, book an Ultimate Corner View room on floors seven to 18 (from $2,000 a night, five-night minimum), where you can watch the parade making its way downtown from Central Park from the 54th Street–facing window and then enjoy another close-up view as the parade passes by the windows overlooking Sixth Avenue. If you're redeeming points, standard awards range from 68,000 to 80,000 Hilton Honors points per night.

This historic high-end hotel (a Category 7 Marriott property with award nights starting at 60,000 points a night) is situated on the south end of the park between Seventh and Sixth avenues, and offers several room types with parade views. Premium Parade-View King rooms on floors 3 to 8 go for $2,199 a night, while Aerial Parade View King (floors 10 to 15) are priced at $1,699 a night. All come appointed with pillow-top king-size beds, marble showers and dedicated work spaces.

For unobstructed parade views from this family-friendly all-suite hotel (a Category 5 Marriott property with redemptions starting at 35,000 points per night) at 39th Street and Sixth Avenue, book the Prime View Package (starts at $2,200 with a four-night minimum), which features eye-level views of the balloons from a fully equipped two-bedroom, two-bathroom suite with separate living, dining and kitchen areas facing Sixth Avenue.

This famous hotel has been a New York City landmark for nearly a century. Boasting a location with easy access to some of NYC's iconic sights, such as Central Park, MoMA and Times Square, it's the perfect spot to catch a good view of Macy's Thanksgiving Day Parade. Book the 550-square-foot the On the Avenue Suite ($425/night) or the more than 700-square-foot Jane Suite, which celebrates actress Jane Russell ($725/night). Both face Sixth Avenue and the parade route. Grab the Warwick and Macy's Shopping Experience to level up your Thanksgiving celebration while saving up to 25% off your suite and snapping up a 15% discount when you purchase anything at Macy's and more.

Located right on Sixth Avenue, Courtyard New York Manhattan/Herald Square (a Marriott Category 5 property with redemptions starting at 35,000 points per night) is a great place to perch when the Thanksgiving parade comes around. Grab its two-bedroom Parade View Room on the ninth to 12th floors (two-night stay minimum).

It's not too late to plan a magical Thanksgiving getaway to New York City. Take in the parade from one of these swanky suites or watch at street level with everyone else clamoring to get a glimpse of Santa Claus and his entourage at the end.

Featured image by Alex Lopez
Editorial disclaimer: Opinions expressed here are the author’s alone, not those of any bank, credit card issuer, airline or hotel chain, and have not been reviewed, approved or otherwise endorsed by any of these entities.