9 best cruise ship desserts to tempt you at sea

Articles
Erica Silverstein is a travel editor for TPG, with a focus on cruise travel. A longtime editor at Cruise Critic, Erica has also written for The Washington Post, Fodor’s and Let’s Go travel guides, and numerous print and online cruise publications.
May 12, 2022
•
8 min read 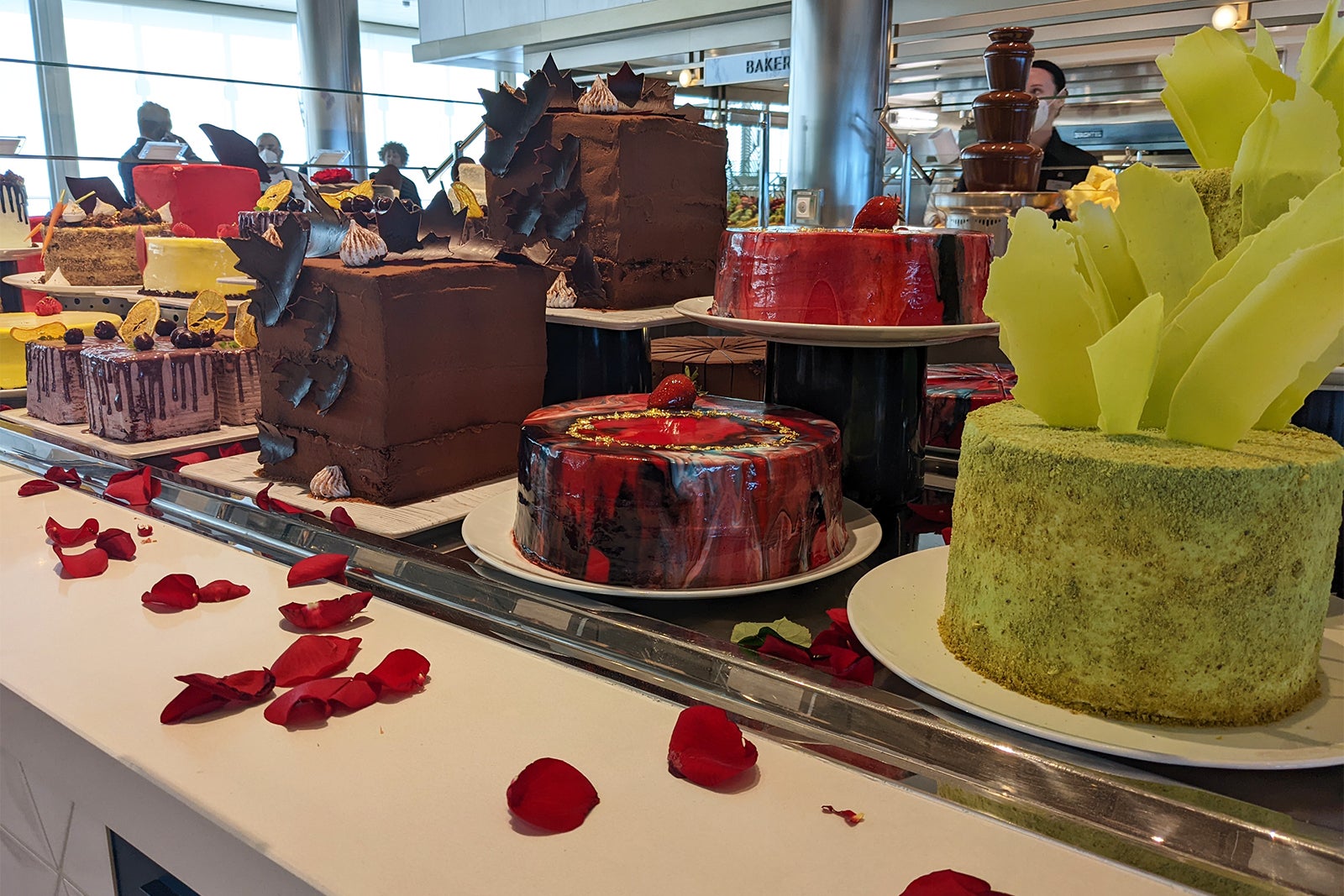 You can keep your Champagne and your fancy steak. My simple pleasure on cruise ships is dessert.

No matter what time of day it is, there’s always a cookie at the buffet or a beautiful display of ship-made gelato calling my name. Sometimes I promise to take only one nibble of the berry crumble or New York cheesecake then put my fork down, but I always end up going back for a second, third and fourth bite.

Whether it’s a Thomas Keller’s dark chocolate layer cake on Seabourn or soft-serve ice cream layered on a dark chocolate cookie from Carnival’s deli counter, I have been known to succumb often to amazing cruise ship desserts.

So when I tell you that the following sweet treats are the best desserts you can find at sea, you’ve gotta believe me. After all, I’ve sampled a large swath of the sugary competition.

Carnival Cruise Line is rightly known for its signature cruise dessert: the chocolate melting cake. It’s a simple dark chocolate cake that’s warm and runny in the center and crisp on top, served in a small ramekin alongside a scoop of vanilla ice cream. It’s a mere five-ingredient dessert with no fancy baking techniques, yet where other lines fail to reach perfection, Carnival executes the dish flawlessly. Every. Single. Time.

Even better (or worse?), it’s on the menu every night. You can’t avoid it.

Related: The ultimate guide to cruise ship food and dining

Baked Alaska is a cruise ship staple. Carnival even parades its version around the dining room, complete with dancing waiters. Normally, I run hot and cold on this dessert option because it often looks better than it tastes. However, Holland America takes this classic dish up a notch with its unique version of Baked Alaska that features Ben & Jerry’s Cherry Garcia ice cream and bing cherries jubilee sauce. Served exclusively in the Pinnacle Grill specialty restaurant, it’s the perfect dish for a cruise line that blends tradition with a touch of modern flair.

Do you like a flavor profile that’s a little bit salty and a little bit sweet? Then head straight to Prime 7 for what many consider to be Regent Seven Seas Cruises’ best dessert: the caramel popcorn sundae. Nestled together in a martini-style glass, scoops of vanilla and chocolate ice cream are topped with bourbon caramel, dark chocolate sauce, whipped cream, salted peanuts and caramel popcorn. Now that’s a ball game you can take me out to any day of the week.

Related: The best meals you can have at sea

Yes, this is a warm chocolate dessert served in a ramekin. But Disney Cruise Line’s famous chocolate souffle is not a lava cake like Carnival’s melting cake. It’s fully cooked with a moist but not runny interior. It’s served with vanilla sauce poured into the center of the souffle rather than vanilla ice cream on the side. It is nothing short of delicious, and it's served at Disney’s adults-only upscale Italian restaurant Palo (found on select ships).

Personally, I prefer molten cakes to souffle, but this dessert makes the list for my mom because Disney Cruise Line’s chefs can make the dessert gluten-free with advance notice. There’s a shortage of standout flourless desserts out on the high seas, so this one is a must-eat.

I fully admit I have never eaten at Royal Caribbean’s fancy restaurant 150 Central Park. My vote for the line's best dessert would be Playmaker’s Campfire Cookie (a warm, gooey chocolate chip cookie baked in cast-iron skillet with layers of s’mores-style marshmallows, paired with a side of ice cream and a shot of milk).

However, I realize that not everyone prefers chocolate in their dessert. The non-chocolate dish everyone raves about is 150 Central Park’s unique take on cheesecake. Instead of layering the sweet, cheesy filling onto a graham cracker crust, Royal Caribbean’s chefs roll it into balls and deep fries them. Think: state fair meets foodie flair. Totally worth the cover charge.

Related: 5 reasons you should splurge on a cruise ship specialty restaurant

Luxury cruise and culinary expert Janice Wald Henderson casts her vote for the Grand Marnier souffle at Silversea Cruises’ gourmet French restaurant, La Dame. It’s so completely baked to order that the “servers rush it to the table while it's still quivering.” She loves the dish’s crusty, slightly skinned top and custard-like interior.

As we’ve established, souffles aren’t my jam, but if they’re yours, be prepared to fork over some serious cash to get yourself on a Silversea cruise STAT.

Now back to something more up my alley: Azamara’s chocolate buffet. On buffet night, make sure to save your appetite for the smorgasbord of cakes, cookies, truffles, confections and chocolate fountains. You don’t want to limit yourself to just one taste. It’s a hedonistic evening and you’ll be shoulder to shoulder with your shipmates as you heap your plates high with sugar. However, just like The Very Hungry Caterpillar, you might experience a chocolate hangover the next morning, so plan for a lunch full of nice, leafy, green vegetables.

You don't have to go all the way to Italy for a taste of sweet, creamy gelato. Hop on board an MSC Cruises ship in the Caribbean and indulge in a frozen treat that’s — dare I say it? — better than ice cream. TPG cruise reporter Ashley Kosciolek recommends the coconut, stracciatella (chocoalate chip) and salted toffee flavors from her MSC Seashore sailing, but the line also serves up my personal favorite, gianduiotto (chocolate-hazelnut) and fruit sorbets. It’s your taste of Italian heaven in a Caribbean tropical paradise — and that’s a sweet, sweet way to indulge on vacation.

When I told my husband that I passed over a chocolate pie for a lemon tart at Eden Restaurant on Celebrity Cruises' Celebrity Beyond, he nearly fell on the floor. When I said it might be one of the best desserts I've eaten on a cruise ship, he said, "Who are you and what did you do with my wife?"

If you don't know Meyer lemons, they're a sweeter version of the tangy citrus fruit that's perfectly suited as a dessert ingredient. Eden's version pairs the lemons with sweet lavender cream and huckleberries on top of a chunky graham cracker crust. One bite and I truly felt like I had arrived in dessert paradise.

Related stories
The ultimate guide to earning elite status with United cards
American Airlines forgot it had landing slots at JFK. Then it lost some of them
After 19 months, United Airlines is officially suspending flights at New York's JFK airport — again
17 ways to earn lots of Marriott Bonvoy points
Featured image by Dessert station at Celebrity Beyond's Oceanview Cafe buffet restaurant. (Photo by Erica Silverstein/The Points Guy)
Editorial disclaimer: Opinions expressed here are the author’s alone, not those of any bank, credit card issuer, airline or hotel chain, and have not been reviewed, approved or otherwise endorsed by any of these entities.