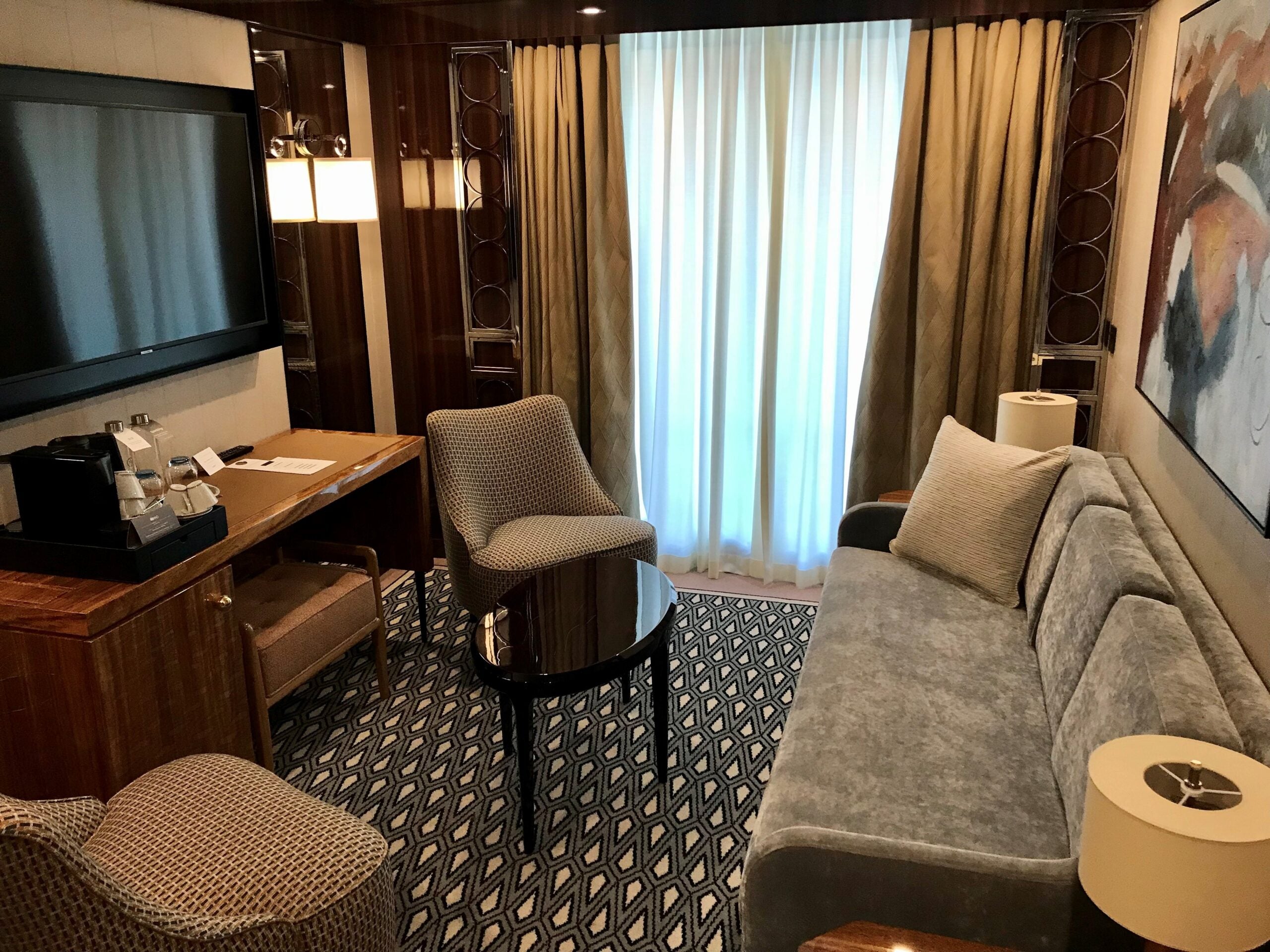 The world's newest cruise line, Atlas Ocean Voyages, is all about retro-chic elegance when it comes to its onboard accommodations.

The Fort Lauderdale-based brand, which just launched its first departure with paying passengers this week, is operating a single small ship named World Navigator for now that boasts cabins and suites with glossy mahogany walls and chrome accents that evoke 1940s glamor.

The rooms also feature sumptuous silvery blue and green fabrics, leather-stitched surfaces, and marble-lined bathrooms that add an air of luxury and sophistication.

Designed to carry just 196 passengers, the vessel is what the cruise world calls an expedition ship. That is, it's built extra tough to go to some of the most remote and off-the-beaten-path parts of the world, from the Arctic to Antarctica. But it's also billed as a luxury ship, and its cabins and suites are designed, above all else, for comfort.

World Navigator is just the first of five sister vessels that Atlas will roll out in quick succession over the next three years as it grows rapidly -- all with a similar array of cabins and suites. The next two ships in the series, World Traveller and World Seeker, should arrive in 2022 and 2023, respectively.

World Navigator and its coming sister vessels have been designed for intimacy with just 98 cabins a piece. That's far fewer cabins than you'll find on most luxury ships -- luxury line Seabourn, for instance, operates vessels that have 226 to 302 cabins. But it's typical for expedition ships.

The 98 cabins on the vessels can be broken down into three broad categories: oceanview cabins, balcony cabins and suites. But the vast majority of the cabins (72 out of 98) are balcony cabins.

There are no windowless "inside" cabins, as you'll sometimes find on cruise vessels.

Design-wise, as noted above, all of the cabins and suites evoke the 1940s with such flourishes as glossy mahogany walls and chrome accents, though the rooms are thoroughly modern. Accents in shades of brown, black and rich greens as well as silvery blues (including green velvet throw pillows and sleek, built-in side shelves covered in stitched tan leather) create a rich and luxuriant aesthetic.

Bathrooms in all categories of World Navigator cabins are lined with marble and feature upscale L'Occitane toiletries.

These are the cabins on World Navigator you book when you're trying to keep your costs down. Significantly smaller than the balcony cabins and suites on World Navigator, they also are the least expensive rooms on the ship by far. But you'll only find a few of them.

Officially, there are 10 oceanview cabins (dubbed Adventure cabins) on World Navigator. But all 10 won't always be available for booking. Atlas plans to use some or all of them on many itineraries to house the ship's expedition guides and entertainers.

Additionally, in early 2022, the line plans to convert six of these cabins from rooms designed for two people into "solo suites" designed for just one traveler. This is notable, as solo suites are relatively rare on luxury expedition ships.

At the same time, Atlas will be taking the rest of the oceanview cabins on World Navigator out of its booking pool, leaving it as an all-balcony-and-suite vessel.

But that's all happening next year. For now, oceanview cabins on the ship still are available.

With these oceanview cabins, you get a window looking out to the sea but not an attached balcony where you can sit outside and enjoy the fresh air. That's the definition of an oceanview cabin.

All 10 of the oceanview cabins currently available for booking are located on the lowest passenger-accessible deck of the ship, which is Deck 3.

Balcony cabins are what everyone wants these days, and Atlas has loaded up World Navigator with lots of them. This is normal for luxury ships. On many recently built luxury ships, every single cabin is not only a balcony cabin but also a suite. That said, all-suite vessels are not the norm in expedition cruising, even at the luxury level.

The latter are the sort of balcony cabins found on the newest Celebrity Cruises ships and vessels operated by several river cruise lines including Avalon Waterways and Crystal Cruises.

As noted above, 72 of World Navigator's 98 rooms are balcony cabins. Of those, 47 are traditional balcony cabins that further break down into two categories:

There are 25 of the infinite veranda-type balcony cabins, also broken down into two categories:

The Veranda Deluxe and Horizon Deluxe cabins are located adjacent to the two spaces that house World Navigator's two lifeboats and have unusual layouts with small sitting rooms that are carved out of space directly behind the lifeboats.

In the case of the single Veranda Deluxe cabin, this sitting area features two portholes overlooking the back of a lifeboat — a feature that gives the room an unusual, ocean liner-of-old flair.

These are the cabins you book when you're ready for a splurge.

There are 10 suites on World Navigator in all, broken down into three categories:

As noted above, Atlas also plans to convert six oceanview Adventure rooms into "solo suites" in 2022. They'll measure the same 183 square feet as they do now but with all of the space devoted to a single person instead of two.

As is typical for expedition ships, there are no truly giant suites on World Navigator of the sort found on some traditional luxury ships such as Regent Seven Seas Cruises' Seven Seas Splendor (where a single suite measures more than 4,000 square feet). Giant suites like that typically only are found on vessels much larger than World Navigator.

World Navigator and its coming sister ships have a relatively wide range of cabin choices including several categories of suites. As is typical for expedition ships, there are relatively few cabins on the vessels in all -- fewer than 100. As a result, the vessels overall have an intimate feel.

With a change in cabin categories coming in 2022, World Navigator also will become an all-balcony ship -- something that's relatively rare in the world of expedition cruising.

Featured image by The living room of a Journey suite on Atlas Ocean Voyages' World Navigator. (Photo by Gene Sloan/The Points Guy)
Editorial disclaimer: Opinions expressed here are the author’s alone, not those of any bank, credit card issuer, airline or hotel chain, and have not been reviewed, approved or otherwise endorsed by any of these entities.