Are first-class tickets worth the splurge? 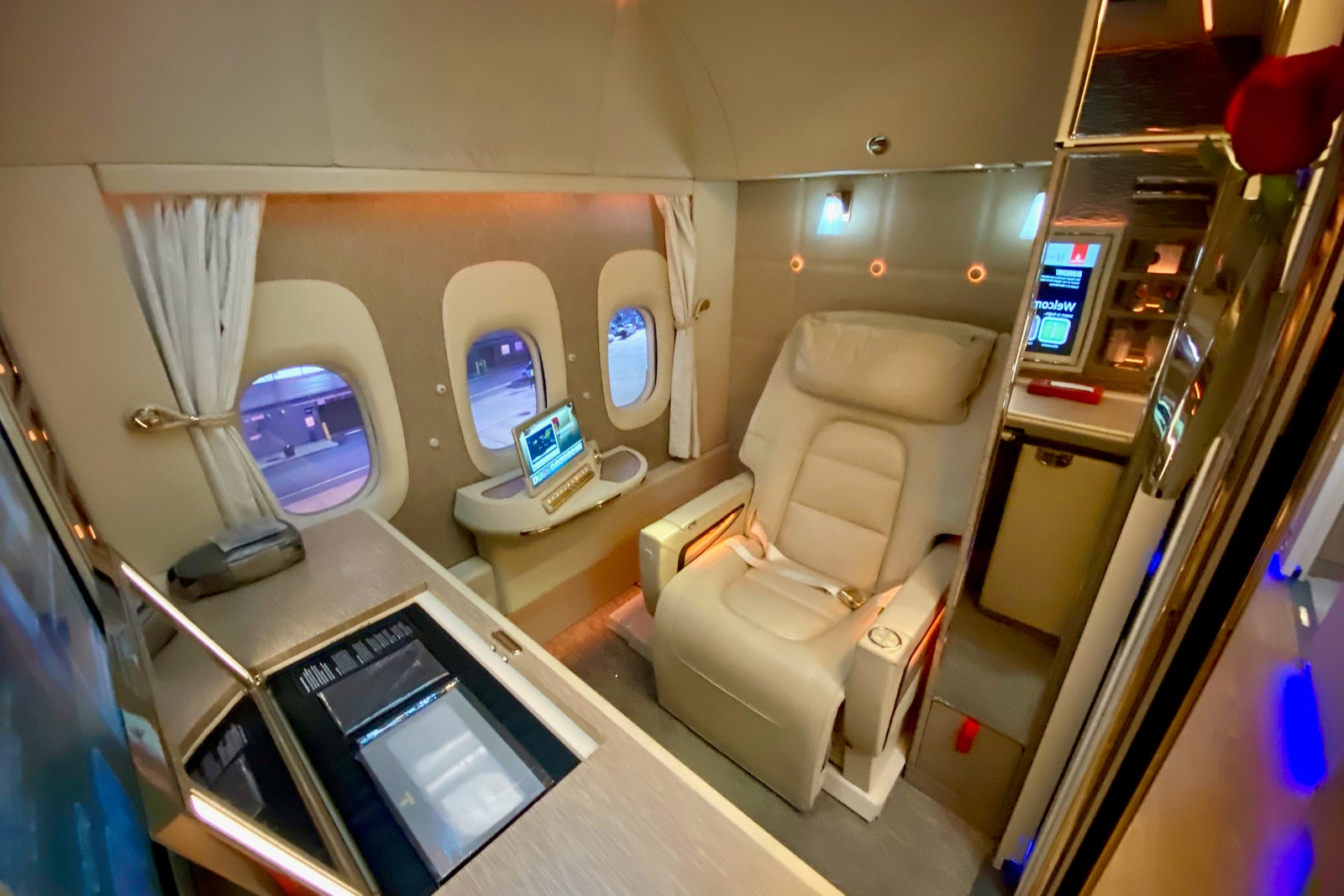 If you're looking for some additional comfort and privacy on your next flight, you might be considering splurging for a first-class upgrade.

Perhaps you're wondering whether you should redeem miles or should cash in a hard-earned upgrade voucher in exchange for a seat assignment in the pointy end of the plane.

While the seats and services in first class vary by airline, there are definitely certain situations when it's worth the buy-up.

Everyone values their time, money and miles differently, but I'll outline some of the reasons why flying in first class may be worth the upgrade.

"What are first-class perks?" is a question I'm often asked as one of TPG's top flyers.

Perhaps the most obvious answer, and certainly one of my favorite perks, is that you can expect a larger, more comfortable seat once you're on board.

The seating configuration will differ based on the airline, but generally speaking, a domestic first-class seat will be a spacious recliner, while an internationally configured product will usually turn into a lie-flat bed at the push of a button.

In addition to the upgraded seat, you'll usually be seated in a much more private cabin, with more personalized service and a higher lavatory-to-seat ratio.

Before you get on the plane, a first-class ticket typically confers access to the priority check-in line, along with an extra checked baggage allowance, priority security and boarding.

In some cases, you may even be invited to use the airline lounge before departure, depending on the destination and other details of your ticket.

In the sky, you'll typically be treated to at least one meal (depending on the length of your flight), along with a bunch of other perks, such as priority access to the overhead bin, larger tray tables and inflight entertainment screens, and priority deplaning.

If you check a bag, you can expect it to be one of the first to be delivered to the carousel.

The "Big 3" U.S. airlines all offer a first-class product on nearly every domestic flight. Here's an overview of the experience on each.

American's first-class experience begins at the airport, where you'll be invited to use the Priority check-in lane at most major airports.

An agent will print your boarding pass, then your bags will be tagged with a priority sticker.

After clearing security, you'll be on your own in the terminal — aside from a few premium domestic routes, most first-class tickets within the U.S. do not include Admirals Club access.

You'll be called to board with Group 1 and spend time relaxing in a standard leather recliner. On most domestic jets, these recliners are arranged in a 2-2 configuration, with no middle seats.

The seats boast an above average recliner, a large bi-fold tray table, AC outlet, USB-A port and side storage compartment.

Flight attendants may serve a predeparture beverage, along with a full meal once airborne.

You're then free to enjoy yourself for the rest of the flight.

The airline's domestic first-class product, dubbed "Delta First Class," is available on most routes within the U.S.

Those splurging for the best seats get access to the Sky Priority lanes throughout the travel experience.

Once on board, Delta's first-class recliners are quite comfortable — they're known as some of the best in the domestic market.

Delta even recently debuted a brand-new domestic first-class product aboard the Airbus A321neo fleet. You can expect to see these new seats that boast additional privacy on more jets soon.

Regardless of which product you receive, you'll enjoy a seatback entertainment screen, tasty meal (on flights longer than about two hours), power outlets and attentive service.

Delta is known for having the best service of the "Big 3" U.S. airlines.

United's first-class offering is also quite similar to its competitors' products.

The seats are oversized recliners, and the airport experience is enhanced with Premier Access perks such as priority check-in and boarding.

United's first-class product comes in a few different varieties. While every seat is a spacious recliner, often in a 2-2 configuration, some of the newly retrofitted jets have a more modern design.

The older cabins feature recliners that might look quite worn, though they are very well padded.

You can expect to receive a similar culinary experience as with American and Delta, though United's catering offerings are often panned by the frequent flyer community as among the worst in the U.S.

A long-haul, first-class ticket is usually a bucket-list item for frequent flyers. Here's how the experience stacks up on some of the world's top airlines.

In the points and miles world, Lufthansa first class is one of the holy grails of mileage redemptions.

It's often available for booking within a few days of departure depending on the availability and the route. If you can find mileage availability, the experience will no doubt be memorable.

Lufthansa offers first-class flyers priority access throughout the airport. If you're flying from the airline's Frankfurt hub, you can even access the separate First Class Terminal, which is reserved for the airline's top flyers.

Once on board, you'll enjoy one of eight seats in the first-class cabin. These seats are massive. They feel like a luxurious and supremely comfortable office chair that also happens to convert into a bed.

The service flow will be personalized to your preferences, with plenty of top-notch liquor, Champagne and food choices available throughout the flight.

You'll also enjoy some special amenities, such as a designer-branded amenity kit, pajamas, slippers and more.

Emirates offers a first-class cabin on most of its jets. The airline has a few different variations of the first-class product, and you'll want to be sure you choose one of the top offerings if you're going to splurge for a ticket.

The Emirates first-class experience begins on the ground with access to the lounge. If you depart from Dubai, you'll relax in a special lounge that's reserved exclusively for first-class flyers.

Once on board, you'll have a semi-private suite. The airline's newest Airbus A380s feature the most updated first-class suite, while nine of the airline's Boeing 777-300ERs feature the fully-enclosed "game-changer" product.

Regardless of which seat is offered on your flight, you'll enjoy fantastic dine-on-demand service with plenty of free-flowing Champagne (Dom Perignon P2 at the moment) and caviar.

Like Lufthansa, you'll also walk away from an Emirates first-class flight with plenty of goodies, such as an amenity kit and pajamas.

While the "game-changer" product on the 777 is no doubt one of the best in the sky, you may prefer to fly on the airline's Airbus A380.

That's because the double-decker jet features an onboard shower available to first-class passengers (you're allowed one, five-minute session of water per flight), as well as an onboard bar that's shared with business class.

Don't worry, though: First-class passengers are served a special first-class drink menu at the onboard bar.

It's the London-based carrier's top offering, and it confers access to the exclusive Concorde Room, if you're departing from London's Heathrow Airport (LHR) or New York's John F. Kennedy International Airport (JFK).

While the Concorde Room pales in comparison to Lufthansa's First Class Terminal or Emirates' first-class lounge, it is BA's best lounge.

Once on board, you'll enjoy an extra spacious pod with direct aisle access.

Most BA first-class seats offer enhanced privacy with a side shield, while some of the newest (and newly retrofitted) jets feature sliding doors in first class.

BA first-class passengers also enjoy more personalized service and more extensive meals, along with a similar set of amenities to what you'd find on Lufthansa or Emirates.

That said, it's worth noting that many industry observers dub BA's first class the world's best business class.

That's in part because the BA first-class seat isn't nearly as special or private as the one offered by Lufthansa and Emirates. Plus, BA's new Club Suite business class is in many ways even more private than the older, first-class product.

However, if you are looking for the most exclusive way to hop the pond with BA, first class it is.

Is first class truly worth the extra cost?

Everyone must decide for themselves.

Flying in first class is no doubt a splurge, regardless of whether you're paying with cash, redeeming miles or cashing in an upgrade voucher.

That said, it's definitely worth being aware of what each airline offers before you lock in an upgrade. Domestically, the product is considerably more comfortable than economy, but you won't be treated to a lie-flat seat.

However, if you're looking for a comfortable seat in which to comfortably catch up on work, then the splurge could be worth it.

Flying first class on long-haul flights is a much bigger deal. These are some of the most exclusive seats on any plane, and the pricing (both in cash and in miles) reflects that. The experience is also among the best you'll find on a commercial aircraft.

If you have the miles or are looking for a once-in-a-lifetime flight, then splurging for first-class on a long-haul flight (with the right airline) can definitely be well worth it.