Best domestic first-class flights and how to book them

Articles
Kyle Olsen is a points and miles reporter at TPG. Since the age of 16, he has been pursuing elite status, visiting 75 countries across six continents. His passion for travel began with his own business which he started at age 13. He is now an expert at maximizing points, miles, and elite status across all major programs.
Aug. 29, 2022
•
10 min read 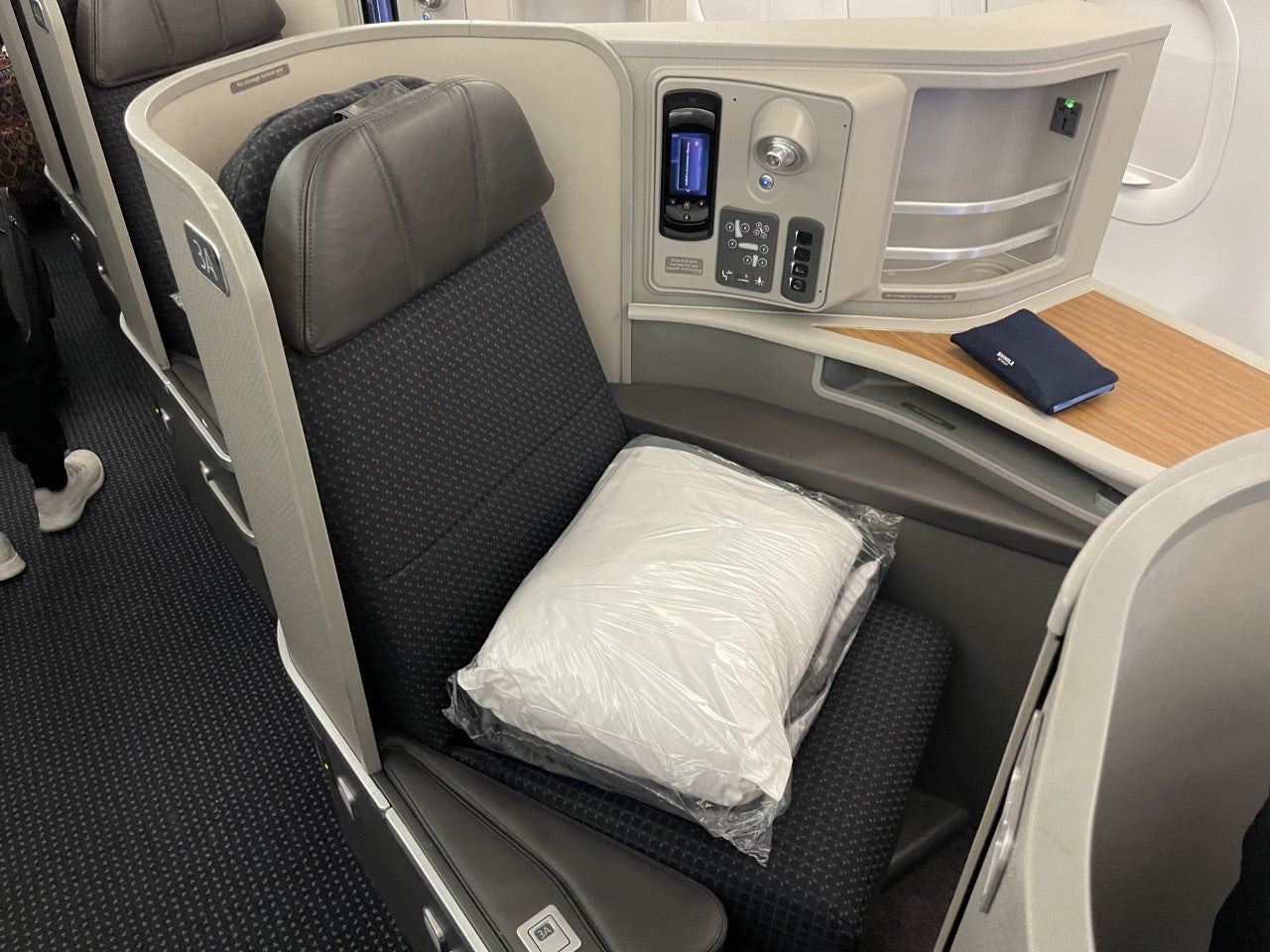 If you're new to the points and miles game, you might think that the only way to get a snazzy lie-flat seat is by taking a long-haul international flight. While most domestic flights that feature first-class cabins offer standard recliner seats, there are some top-of-the-line, lie-flat seat routes.

Today, we'll look at the best domestic U.S. first-class flights and how you can book them — on points and miles, of course.

For more TPG news, deals, and points and miles tips delivered each morning to your inbox, subscribe to our daily newsletter.

American's Boeing 777-300ER first-class seats are arguably the "creme de la creme" of domestic first class. With just eight seats in a two-row 1-2-1 configuration, the seats adjacent to the windows swivel 90 degrees to face the window. Passengers can also access a built-in tray that flips out for a laptop or tablet. "This provides a more traditional 'desk' set-up, and it gives you easy access to the power outlet just to the right," TPG's content operations editor Madison Blancaflor said.

Last year, TPG found this plane operating the John F. Kennedy International Airport (JFK) to Miami route — though there weren't any Flagship amenities on this route. To read a fun review of the four cabins on this plane, check out this link.

How to book: If you find award space, Etihad Guest, perhaps one of the best lesser-known points currencies, should be your go-to. For just 32,500 miles, you can fly within the U.S. in Flagship First. Best of all, Etihad Guest is a transfer partner of American Express Membership Rewards, Capital One miles, Citi ThankYou Rewards and Marriott Bonvoy. You'll need to call Etihad Guest to book American Airlines awards as they cannot be booked online.

You can also book directly with American Airlines, but in our tests, first-class flights on the Boeing 777-300ER from LAX to MIA were selling for at least 55,000 miles one-way.

The only other aircraft in American's fleet with a proper Flagship First cabin is the Airbus A321T, which is configured for premium transcontinental flights.

Believe it or not, this plane only has 104 seats (Spirit has 228 seats on the same plane), and 10 of them are Flagship First reverse Herringbone seats in a 1-1 configuration. Flagship First passengers enjoy access to the Flagship First lounge and dining as well as Casper sleep sets and inflight meals curated from American's partnership with the James Beard Foundation and chef Sarah Grueneberg.

Unfortunately, there's talk that this plane might be reconfigured, ending American current Flagship First transcontinental service. For now, though, you can enjoy it.

Routes: You can fly the A321T on all nonstop flights from JFK to LAX, John Wayne Airport (SNA) and San Francisco International Airport (SFO). The A321T is available on nonstop flights from LAX to Boston Logan International Airport (BOS). Lastly, the A321T often flies between JFK and BOS, but these short-haul flights don't offer any of the Flagship benefits.

There's a lot to love about the Delta One seats on the Airbus A350-900. Each seat has a door that you can close inflight for added privacy, but the fancy perks end there. Unless you find one of these planes on a premium-transcontinental flight, you won't receive the Delta One amenities, which include added perks such as access to the Delta Sky Club and Someone Somewhere handcrafted amenity kits.

Heads up — some secondhand A350s in Delta's fleet have a dated 2-2-2 business class configuration.

Despite being a somewhat dated 2-2-2 configuration, first class on Hawaiian's A330 makes you feel like you've arrived in Hawaii the moment you step foot on the plane. With just three rows of lie-flat seats, TPG was impressed by the stellar service and superb attention to detail on Hawaiian's A330.

How to book: Unfortunately, there aren't any bargain options to book Hawaiian's first class on points and miles. Transpacific flights on the A330 start at 40,000 miles per person, one-way. One option is to open a Hawaiian Airlines® World Elite Mastercard®, which has a 70,000 points sign-up offer. Alternatively, you can transfer American Express Rewards points and Bilt Rewards points to HawaiianMiles at a 1:1 ratio. Finally, West Coast to Hawaii Hawaiian Airlines first-class flights cost 80,000 points round-trip (yes, it has to be a round-trip) when using Virgin Atlantic Flying Club points.

Let's be honest — JetBlue's Mint rocks. You'll enjoy the all-new Mint suite if you get on one of the new A321neos. However, even the older Mint suite — which is roughly ten years old — is still an aspirational booking given its magnificent soft product.

Beyond the Master and Dynamic noise-isolating and Wanderfuel-branded amenity kits, Mint passengers get to customize their meals by selecting several small entrees. Flight attendants prepare fresh cocktails by shaking and pouring right at your seat.

It's clear that Mint flight attendants take pride in their work, and it's evident in their service — that isn't something you can say about all the airlines.

Routes: Within the U.S., you can find Mint on numerous JetBlue coast-to-coast flights.

How to book: You can book Mint using JetBlue's own loyalty program, TrueBlue. The number of points you use will depend on the cash price of your flight — think at least 60,000 points one-way. You can transfer Amex Membership Rewards, Chase Ultimate Rewards, Citi ThankYou Points, and Marriott Bonvoy points to TrueBlue. Alternatively, you can use AAdvantage miles to book Mint. That goes for 65,000 miles one-way on transcontinental flights.

Last, but certainly not least, I think that United's premium transcontinental service (also known as P.S.) is one of the best in the business. United uses the same pod-like, lie-flat seats on its international Polaris business class flights. Passengers can also access the United Club before their flights, and enjoy Saks Fifth Avenue linens and amenity kits inflight.

Before the pandemic, United used to serve multi-course meals ordered from paper menus. Meals ended with an ice cream sundae cart where passengers could customize their sundaes with hot fudge, warm caramel, nuts, whipped cream and, of course, a cherry on top. Some of these luxuries haven't returned yet, but from what I understand, the full P.S. service will return in the coming months.

Routes: Newark Liberty International Airport (EWR) to SFO and LAX. United once operated its P.S. service to Boston, but that ended during the pandemic.

How to book: It's unlikely that you'll find space, but if you do, you can book these flights using Turkish Airlines Miles&Smiles for just 12,500 miles. Yes, you read that right — 12,500 miles. You can transfer Bilt Rewards, Citi ThankYou Points, Capital One Miles and Marriott Bonvoy points to Miles&Smiles.

Another option would be to transfer points from Amex Membership Rewards, Bilt Rewards, Chase Ultimate Rewards, Citi ThankYou Points, Capital One Miles or Marriott Bonvoy to Singapore Airlines KrisFlyer. That would allow you to book United's P.S. for 25,000 miles.

Lastly, you can use United MileagePlus (transfer partners of Bilt Rewards, Chase Ultimate Rewards and Marriott Bonvoy). While MileagePlus will give you availability to the greatest number of flights, you might run into flights for upwards of 100,000 miles one-way with its dynamic pricing model.

There are plenty of magnificent domestic first-class flights out there, but the good ones require a little more points and miles savviness. Still, by knowing the ins and outs of each of these programs, you'll be on your way to traveling with the maximum luxury that domestic flights have to offer.

If you can find availability with points, you'll be in for a treat.