Articles
Summer Hull , aka Mommy Points, ran the Mommy Points site for families who want to travel more for less using miles and points for seven years. She now heads up a variety of special projects at TPG when she isn't exploring the world with her own two girls.
Follow
Aug. 16, 2022
•
8 min read 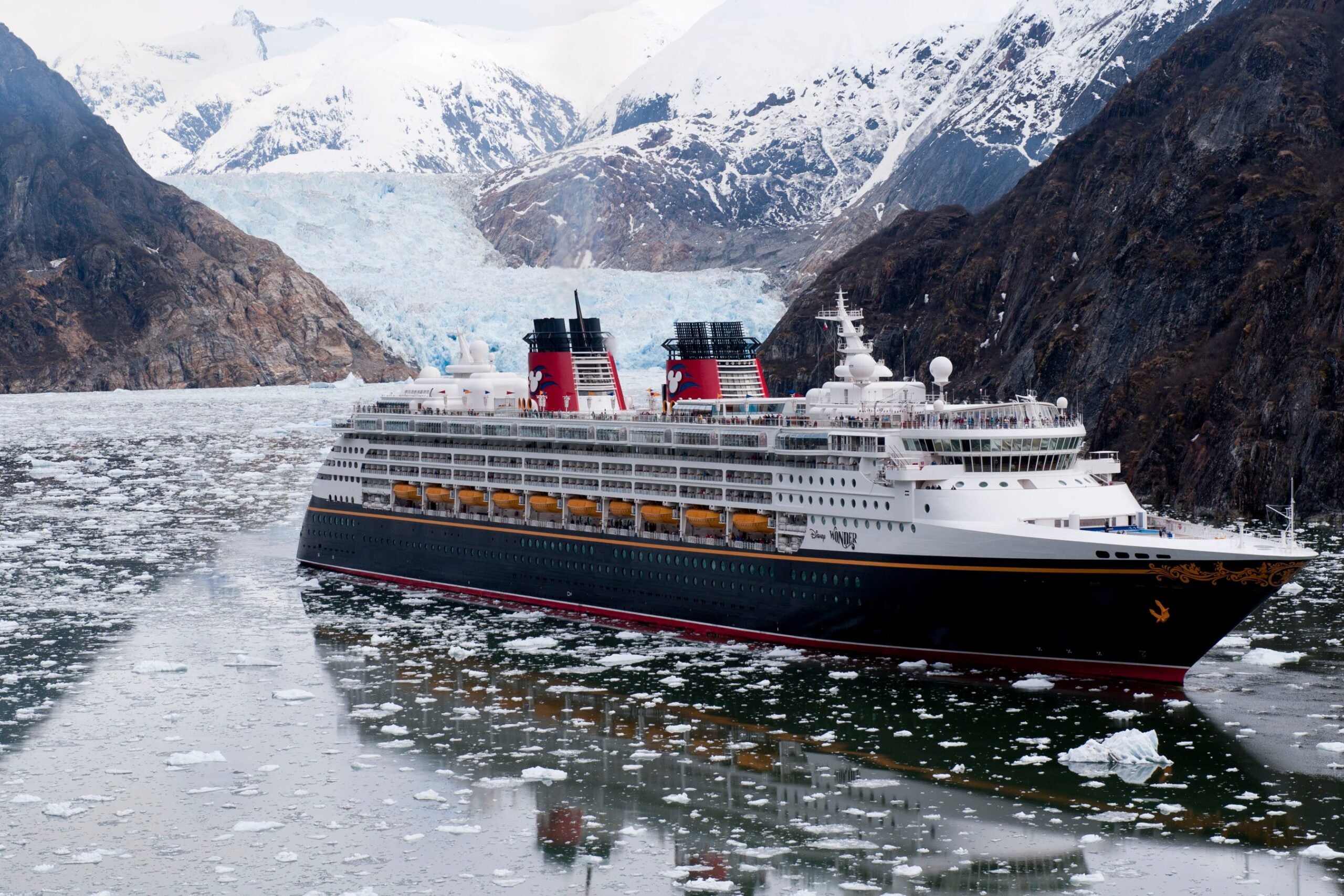 If the last few years have taught or reinforced any lessons, it is to always, always take the trip when the option presents itself. That includes those big, intimidating, once-in-a-lifetime adventures that can feel scary to put into motion.

With that in mind, we recently booked a big, expensive, two-cabin cruise to Alaska for the summer of 2023. The trip will include not only my kids, who will somehow already be 13 and 8 next summer, but also my parents. This includes my dad, who at 74 years young by next summer has never sailed — and likely won't other than on this one, big trip.

To sail from Vancouver, British Columbia, to Alaska (and back), you obviously have to first get to Vancouver. And with weeklong cruises to Alaska already pretty pricey, the prospect of also needing five round-trip summertime airfare tickets is ... painful.

Since there are only so many ways to save on the Alaska Disney cruise itself (and we are using every tip in the book), I'm also leaning into using every trick to save on airfare that I can muster.

After going through the gamut of various ways to save on airfare, I've landed on what may be the best way to book airfare when cruising to Alaska: the Alaska Airlines companion certificate.

Sign up for TPG's daily newsletter to get points and miles coverage like this delivered to your inbox.

Flying to Seattle vs. Vancouver

Some cruise lines sail to Alaska from Seattle, while others depart from Vancouver.

Examples of some cruise lines that depart from Vancouver include Royal Caribbean, Celebrity, Silversea, Holland America and our chosen line, Disney. Because of complex laws and regulations, cruises that sail from Seattle still have to make a stop in Canada, but that's a tale for a different story.

If you choose to book an Alaska cruise on a line that departs from Vancouver, it may still be in your best interest to fly to Seattle.

Even ignoring the different levels of paperwork and regulations required to fly internationally into Canada versus staying within the U.S., the price of tickets alone may quickly drive you to look back south of the border.

Using our summer 2023 sailing dates as an example, tickets from Houston to Vancouver start at $600 to $700 round-trip per person — and all but the priciest options require a connection.

However, nonstop airfare prices to Seattle for the very same dates range from $300 to $450 round-trip per person. Obviously, prices vary by date and originating city, but outside of unique sales or situations, I'd expect the pattern of Vancouver costing more than Seattle to largely hold for departures from other U.S. cities.

You need to also factor in the cost, time and hassle of getting from Seattle to the port in Vancouver when making your decision. But quickly cutting airfare costs for five people by up to half by flying to Seattle instead of Vancouver frees up some room and tolerance for those factors.

We've done that roughly three-hour drive before to go skiing in Whistler, British Columbia, and it wasn't too bad, even with the border crossing. But, with a weeklong cruise, you do need to get creative so that you aren't paying for a rental and parking for days that you are at sea and aren't using it.

One option to get from Seattle to Vancouver includes the Amtrak Cascades train, which is scheduled to return later in 2022. For now, the route is operated by buses, but the train should return before next summer. Right now, non-discounted prices are starting at $68 each way, with 50% discounts for kids and 10% discounts for seniors.

Another option would be doing two one-way car rentals, but note that not all car rental agencies permit one-way international rentals. Budget and Avis are two rental options that, based on searches, do permit these one-way rentals.

Related: Choosing the best Alaska cruise for your family

It just so happens that one of Alaska Airlines' hubs is in Seattle. And while this will obviously vary, in our case, it has the cheapest flight option by a pretty healthy margin.

But that's just the beginning of the story.

Alaska Airlines has a buy-one-get-one companion voucher awarded at each credit card account anniversary year (and sometimes one comes as part of a card's sign-up bonus, too). It has very few use restrictions, as long as you are flying within the United States.

As a relevant aside, if you are in the market, the Alaska Airlines Visa Business card has welcome bonus of 40,000 bonus miles plus Alaska's Famous Companion Fare™ from $121($99 fare plus taxes and fees from $22) with this offer after making $2,000 or more in purchases within the first 90 days of opening your account.

To use the Alaska Airlines companion voucher, purchase one economy fare on a domestic Alaska Airlines-operated flight with your Alaska Airlines credit card (aka not using miles) and then the second ticket will cost you just $99 plus some taxes and fees, which in this case are just under $37.

That translates to paying for one ticket to Seattle at a rate that is already a few hundred dollars less than flying into Vancouver — and getting the second ticket for $135.63, which in an era when summer airfare has been quite the bear, is a relief.

Total savings on airfare for our Alaska cruise

We currently have five people planning to go on the cruise, but I'm going to show cash airfare numbers just for four people — because we are likely using miles for the fifth as the companion certificate works best in pairs.

For four nonstop, round-trip tickets from Houston to Seattle on our preferred dates and times (using Alaska Airlines companion vouchers for two of those tickets), our cash cost is $1,145.68.

If we instead purchased four nonstop tickets from Houston to Vancouver for our needed times and dates, it would cost $2,976.

That $1,830 in savings is a pretty big price difference in my book — and that's on top of some of the easier logistics of just flying domestically instead of internationally.

Naturally, we'll need to deduct from the savings the ultimate price of a train, bus or car to go from Seattle to Vancouver and back again, once we decide on those details as the sailing gets a bit closer. What we'll likely do as a hedge is book one-way car rentals to and from Seattle and Vancouver. Currently, prices for two one-way rentals are starting at around $400. Hopefully, with the train coming back online and the relevant child and other discounts, our ground transportation prices will get a little lower, but at least we know it shouldn't get worse than that.

There isn't one best way that applies in all situations, but if you are planning an Alaska cruise and Alaska Airlines operates from your home airport, using an Alaska Airlines companion certificate from a cobranded credit card to fly two people to Seattle for less is a tactic worth considering to bring down the total airfare cost.

This is especially true if your Alaska cruise departs from Seattle, but even if you depart from Vancouver, it can still be worth it to fly to Seattle in some situations. Needing a handful of tickets makes the savings even greater for us since we do have access to multiple companion vouchers.

By saving on airfare, you have more cash for other things — such as booking some of the best Alaska cruise shore excursions.

Featured image by Diana Zalucky, photographer
Editorial disclaimer: Opinions expressed here are the author’s alone, not those of any bank, credit card issuer, airline or hotel chain, and have not been reviewed, approved or otherwise endorsed by any of these entities.