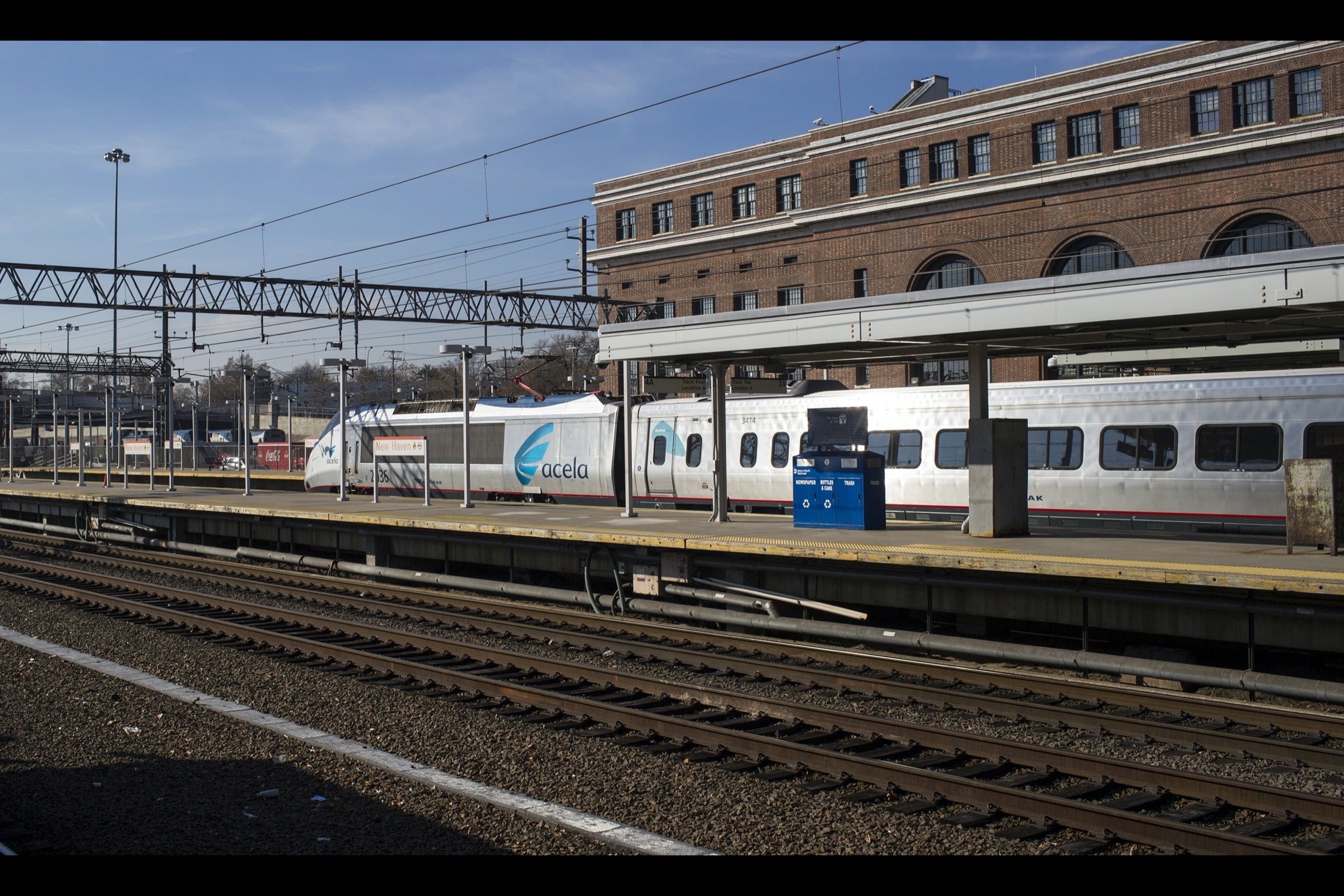 It’s been a pretty big year for Amtrak.

The rail service launched several new lounges at the beginning of 2021, and brand-new Acela train cars will begin service this year.

And after President Joe Biden -- who is a noted Amtrak fan -- announced a $2 trillion plan to modernize transportation infrastructure in the United States, the company released an ambitious proposal to significantly expand ridership with new routes and enhancements.

Amtrak’s Acela service between Boston and Washington was a game-changer soon after it first entered service on Dec. 11, 2000. After the terrorist attacks of Sept. 11, 2001, it quickly gained a loyal following among travelers commuting up and down the Northeast Corridor.

Most of the cars are Acela's business class, but Amtrak's premium-within-a-premium product is its Acela first class, which caters to business travelers craving a hot meal and upscale lounge access.

I tried out the food at Amtrak’s new Metropolitan Lounge at New York City’s brand-new Moynihan Train Hall last week and was admittedly disappointed. So, I was curious to see how Amtrak’s flagship Acela first-class product held up during the pandemic.

Amtrak has positioned itself as the ideal way to travel, especially along the Northeast Corridor, for travelers who are concerned about flying.

TPG's executive editor, Scott Mayerowitz, reviewed the first-class option two years ago. And it's clear that, since then, much has changed. But a lot has (unfortunately) stayed the same.

Luckily, all of that is going to change with Amtrak's new Acela trains, which are being tested now and are supposed to be in service by the end of this year. Watch this Amtrak video to check them out:

My day began with a stop at Amtrak’s lounge ahead of an 11 a.m. departure to Washington’s Union Station.

If you remember Amtrak's Penn Station lounge, Club Acela, it might not bring back the fondest memories. It was woefully outdated, dark and cramped, as our 2019 review pointed out. I visited it once in 2019 while traveling in first class and compared it to a funeral home.

Amtrak's newest crown jewel, the Metropolitan Lounge, doesn’t feel like an Amtrak product at all.

It’s full of light and spacious, with employees on hand to take food and drink orders and update you when your train arrives. The lounge also features a balcony where you can gaze out at the people in the hall below you. It looks and feels almost like an American Express Centurion Lounge.

I was able to access the lounge because I was traveling on Amtrak’s Acela Express in first class between New York City and Washington, D.C. Lounge access is also available for travelers with reservations in sleeper cars; Amtrak Guest Rewards Select Plus and Select Executive elites, who get unlimited access; and Select members, who get two single-visit passes every year.

Overall, I was very impressed with the new lounge -- aside from the food -- and think Amtrak made a smart move by prioritizing the lounge experience.

We pulled out of Moniyhan on time and started the journey down the Northeast Corridor to Washington, D.C.

This train could’ve used a refresh, but Amtrak is on track (pun intended) to introduce its new trains this year, bringing a much-needed refresh to the dated trains.

Amtrak’s new first-class car will have larger and fewer seats than the current product. Travelers will also enjoy in-seat power and reading lights, plus other amenities like catered in-seat dining and alcoholic beverages.

Amtrak paid $2.45 billion for 28 new trainsets, which will replace the current 20 that Amtrak already operates. This will allow for faster service and an increase in capacity overall along the Northeast Corridor.

But for travelers who are concerned about capacity — especially right now — Amtrak is allowing travelers to see exactly how full the train will be. This feature was introduced during the pandemic.

Amtrak rolled out much-needed assigned seating first in the Acela first-class cabin back in 2018. Then, in August 2020, Amtrak expanded it to all Acela cars. No more fights to be the first in the Quiet Car or scrambling for seats to sit with your travel companions.

Unfortunately, Amtrak will stop blocking seats on May 23.

Business-class seating on the Acela is arranged in a 2-2 configuration. But in first class, it’s 1-2. Window and aisle seats go quickly, as I found out on my last first-class trip, so I made sure to snag one as soon as my reservation was confirmed.

I picked seat 9F, which has a table and more than enough legroom, and the seat itself was plush and comfortable.

Shortly after pulling out of New York, an attendant came through the car to take food and drink orders.

When I rode Amtrak's Acela first class back in 2019, I remember thinking, “This is as good as it’s going to get on an American train system.” From the service to the food, I was pretty impressed at the time. The beef lunch was tender, and the potatoes and carrots tasted good.

I was really hungry after my disappointing food experience at the lounge, so I was looking forward to grabbing a hot meal while working on the nearly three-hour ride to Washington, D.C.

Due to the pandemic, however, it seems like Amtrak cut back its dining program. That's unfortunate, as this one-way ticket between New York City and D.C. cost a whopping $328 -- which is about the same price as several first-class flights along the East Coast.

In Mayerowitz's 2019 review, he had his pick of breakfast options and even described his breakfast as being tasty. But I couldn't relate.

Food was limited to a warmed-up Jimmy Dean breakfast sandwich, cheese omelet or a box with a breakfast bar, muffin and water. Even during a pandemic, Amtrak can do better, especially for its flagship product.

The drink menu was much better, and included everything from sparkling wine to coffee. I ordered the breakfast sandwich and a glass of prosecco and settled into my seat to catch up on work.

Just as we pulled out of New York, the conductor came on the intercom to remind passengers that, due to the pandemic, mask compliance wasn't optional.

But the mask mandate wasn't enforced at all on this trip.

Several passengers kept their masks off or under their noses for most of the journey, and the crew didn’t address it until I pulled an employee aside and made a comment.

I don’t mind traveling during the pandemic -- and I don’t even really mind being around others -- but mask compliance has to be enforced. It’s a health and safety issue and puts both employees as well as passengers at risk.

Besides the mask hiccup, however, the service was extremely personable, which hasn't changed from our previous review of Acela first. The attendant was frequently on hand to take drink orders, but the service never felt overwhelming.

Amtrak's Wi-Fi can be hit-or-miss, even on a premium product like Acela, but the connection was strong for the duration of the journey. I could catch up on emails, file a couple of stories and stream music without any problems.

The car also felt very clean, and frequently used touchpoints were cleaned during the trip. The bathroom, though not immaculate, was also clean.

We pulled into Washington’s Union Station right on schedule. And, unlike what I’ve experienced while flying during the pandemic, disembarking from the train was an orderly and seamless experience.

I generally enjoy riding the Acela because it's a pretty, scenic ride, comfortable and you can snag the occasional business-class deal at a steal. And it's certainly faster than my usual Northeast Regional train ride between New York City and Washington, D.C.

Amtrak has positioned itself as a better alternative to flying, and in many ways, it is. But there are some kinks the rail company needs to work out, both on its premium product and the overall experience. While the drink selection was a high point of the meal service, the food was a disappointment. But even more upsetting was the lack of enforcement about mask usage.

Featured image by (Photo by Robert Nickelsberg/Getty Images)
Editorial disclaimer: Opinions expressed here are the author’s alone, not those of any bank, credit card issuer, airline or hotel chain, and have not been reviewed, approved or otherwise endorsed by any of these entities.