Nice, but is it worth the extra cost? A review of business class on Amtrak's Acela, NYC to Boston

Articles
Liz Hund is a former TPG writer, covering everything from the latest deal to deeper guides with a focus on beginners.
Follow
March 02, 2020
•
10 min read 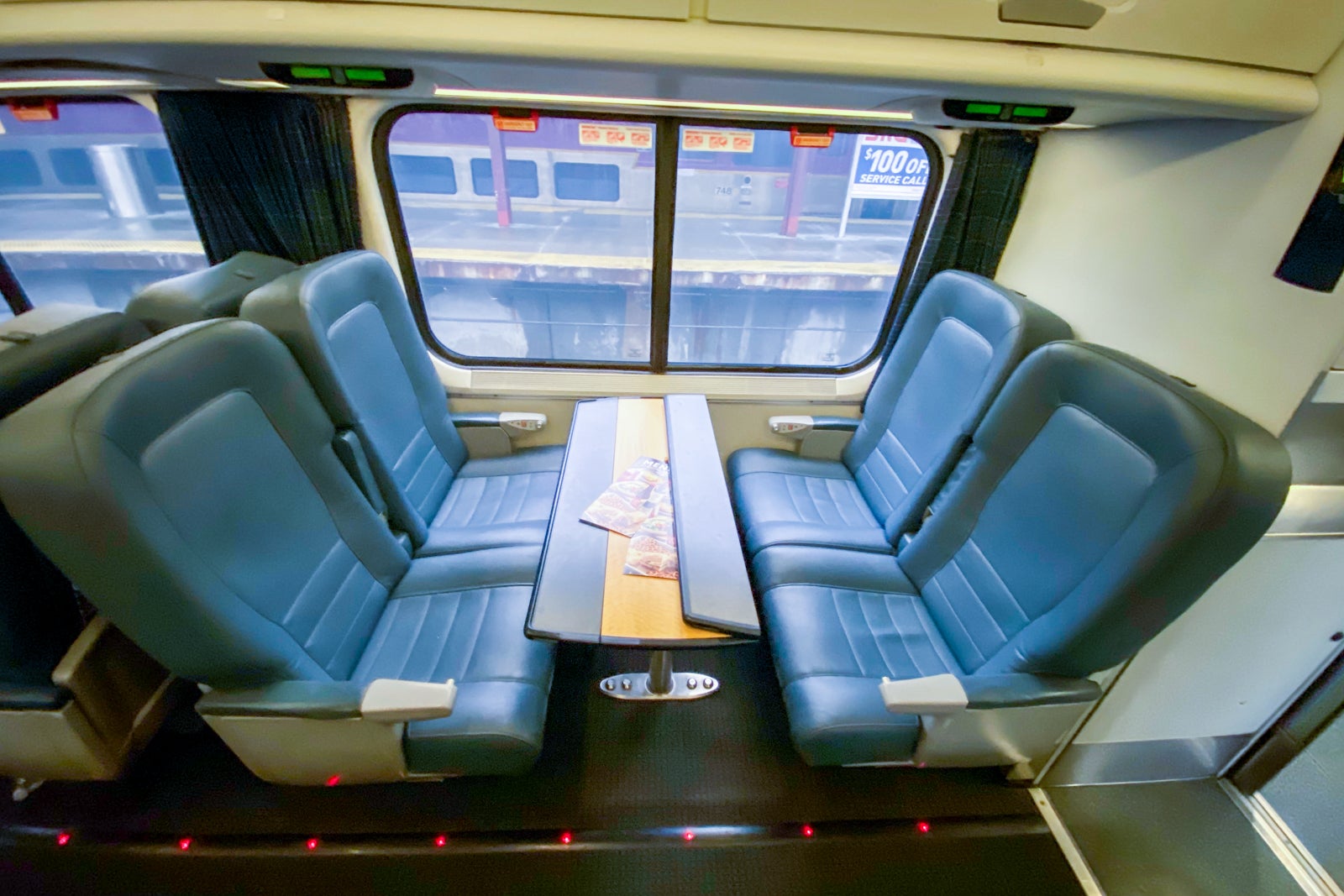 Amtrak's Acela will get you from New York City to Washington, D.C., in just two hours and 33 minutes with its speedy nonstop service, making it a businessperson's dream. With stops, the 150-mph train makes the trip in two hours and 55 minutes. Getting from NYC to Boston takes three and a half hours.

The Acela is not as fast as the high-speed trains in Asia and Europe, which routinely crack 200 mph, but it's a convenient and productive alternative to flying or driving.

Generally, Acela offers business travelers hourly service during morning and afternoon rush hours between New York, Philadelphia, Baltimore and Washington, as well as many convenient round-trips between Washington and Boston. If your budget allows, it's a quick and comfortable way to traverse the Northeast Corridor.

Related: Planes, trains and a bus: We raced from NYC to DC to find which was fastest

There's no coach class on the Acela, just business and first. TPG's Executive News Director Scott Mayerowitz reviewed the first-class option back in April 2019. Since then, Amtrak has updated its interiors (with plans to upgrade them even more in 2021), so we thought it was time to check out the refreshed business-class product.

In the past, Amtrak was a transfer partner of Chase Ultimate Rewards, but that relationship is no longer, sadly. You can redeem points earned with the Amtrak Guest Rewards World Mastercard, but if you’re paying cash, be sure to use a card like the Chase Sapphire Reserve which earns 3x points per dollar spent on travel purchases or the Capital One Venture Rewards Credit Card, which allows you to redeem Venture miles at a fixed rate against the cash price of a ticket.

I booked directly with Amtrak, making sure to sign into my Amtrak Guest Rewards account so that I would earn points for my journey.

The information for the Amtrak Guest Rewards card has been collected independently by The Points Guy. The card details on this page have not been reviewed or provided by the card issuer.

I booked my ticket from New York to Boston three weeks before departure for $129 one-way. I paid with my Chase Sapphire Preferred Card, which earned me 258 Ultimate Rewards points thanks to the 2x earnings on travel purchases. I also scored 323 Guest Rewards points since Amtrak gives travelers 2x points per dollar spent, plus a 25% bonus on business-class bookings.

I have only one thought about New York Penn Station, and it was summed up in a tweet from a man of God:

This nightmare of a train station could be my least-favorite place in the world. It's chaotic, dirty and woefully outdated. The only thing I can think of at Penn Station is when can I get out of Penn Station.

This time I was determined to make it less stressful and that started with arriving earlier than I usually do.

My train was scheduled to leave at 11:10 a.m., so I decided to show up two hours early to get some work done and also to avoid my typical chaotic sprint to the platform. It was a Saturday morning, so I didn't have to battle rush-hour traffic — things were already looking up!

I thought I'd be able to buy a day pass to the Club Acela but was let down when I learned that I had to be a first-class passenger or a United MileagePlus Club cardholder.

I know what you're thinking, how did you not know that? Well, as a get-to-the-station-at-the-absolute-last-minute kind of person, I never put much thought or research into it. I had just heard about day passes, but it turns out that those are only available to business-class passengers in Boston, Philadelphia and Chicago. Rookie mistake. (Then again, I wasn't missing much. The current, windowless Club Acela is not exactly a top-level lounge; its future incarnation promises to be a lot better.)

Luckily, the seating area wasn't too crowded and I was able to enjoy some neighborless work time. Although it wasn't jam-packed, it was still so loud — but then again, you're in the middle of New York City.

I was surprised that the internet wasn't unbearably slow, though I was mostly just writing. I was able to do what I needed to get done.

Per usual, when the track was announced, everyone who wasn't already hovering quickly flocked to the track. Nonetheless, I was down the escalator and on the train in about five minutes.

The Acela train has two classes: first and business. First-class passengers have the option of preselecting their seats, which are arranged in a 2-1 configuration. Business-class riders do not have that luxury; it's first-come, first-served.

Related: Your guide to all Amtrak routes in the U.S.

By the time I got on, a lot of the window seats had already been claimed, but I was able to grab a window seat with a table. The business-class seats are arranged in a 2-2 configuration with a mix of front- and back-facing seats.

The leather looked much better than when Scott reviewed Acela first class. That's because the entire Acela fleet got an interior refresh in June 2019. The seats are as comfortable as they are wide and feature a good amount of recline.

Business-class passengers have the option to purchase food and drinks, though you have to order at the snack bar, located in its own car. The offerings weren't anything special -- think Jimmy Dean breakfast sandwiches -- and I'd already had breakfast, so I wasn't tempted.

If you're in the mood for a drink, the prices aren't bad. Certainly better than any price you'd find at a bar in either New York or Boston.

Acela business class doesn't come with any special amenities, but the train does offer free Wi-Fi and power outlets. Amtrak Wi-Fi gets a bad rap, but I was able to work with no serious connectivity issues. It did take longer than usual for things to load and I had a few moments of interruption, but again, I was able to get done what I needed to get done.

When it comes to the bathrooms ... well, let's just say I was happy to wait until Boston. It wasn't particularly dirty at first glance, but it didn't smell clean.

The Acela is an efficient way to get between Boston and New York. It got me from Penn Station to South Station in just over three and a half hours. However, I wouldn't say it's the most cost-effective at $129 one-way. If the trip had been on my own dime, I'd probably have leaned toward the $39 Northeast Regional saver fare. The Regional takes about 30 minutes longer but at a third of the price, it's a win in my book. There weren't any standout amenities that set Acela business class apart from the Northeast Regional for me, besides the speed of the train and the updated seats. But, no matter which train or cabin you select, train travel is a great alternative to flying or driving, especially if you're being more conscious of your carbon footprint.

Featured image by (Photo by Elizabeth Hund/The Points Guy)
Editorial disclaimer: Opinions expressed here are the author’s alone, not those of any bank, credit card issuer, airline or hotel chain, and have not been reviewed, approved or otherwise endorsed by any of these entities.