15 of the most beautiful villages in Spain

Articles
Lori Zaino is a writer for TPG and TPG UK covering travel, news, points and miles and more. She's been based in Madrid, Spain almost 15 years and is an expert in travel throughout destinations such as Europe, Southeast Asia and Africa.
Follow
July 30, 2022
•
12 min read 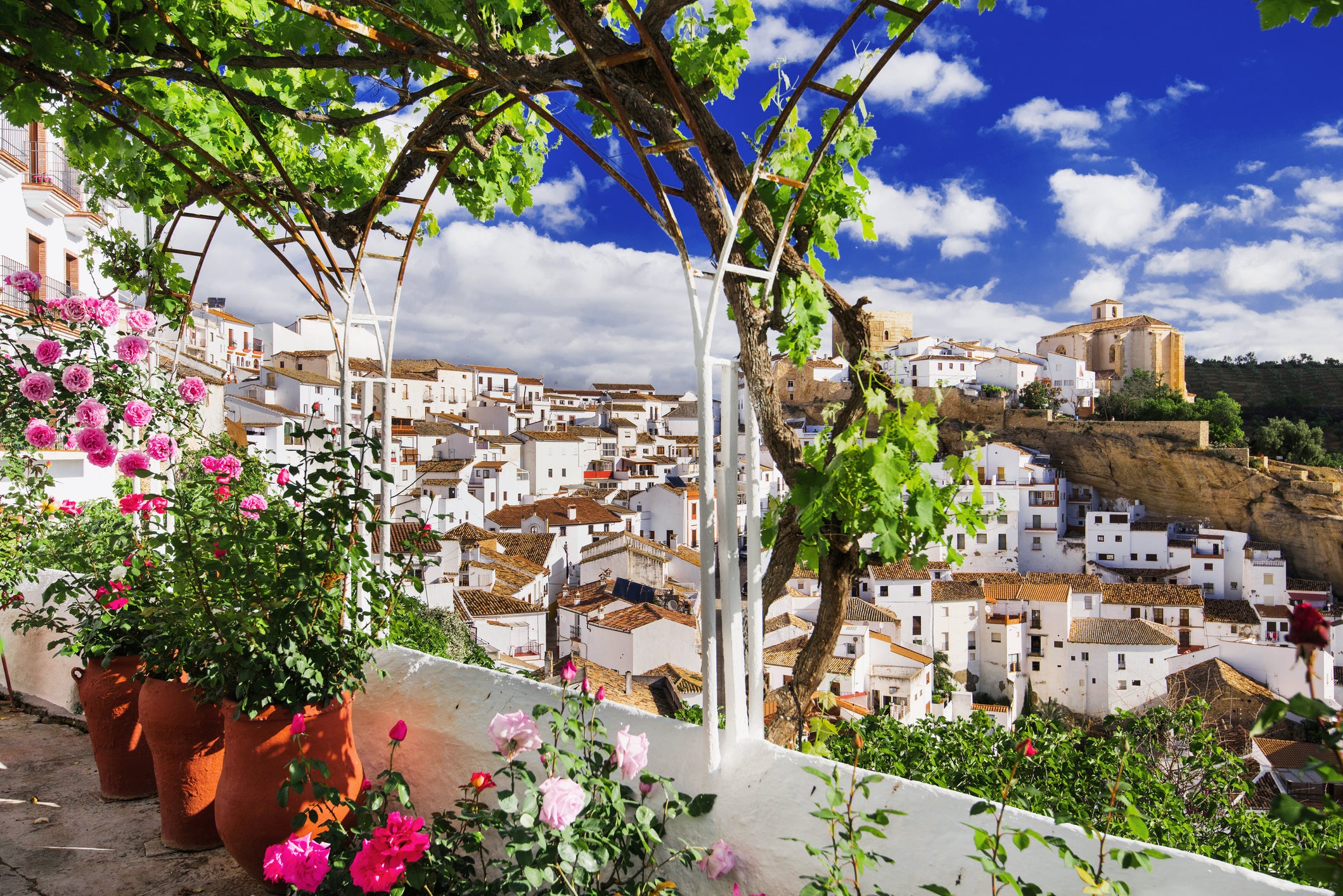 For anyone planning a trip to Spain, it may be overwhelming to decide where to begin. Will it be Madrid's art, Ibiza's beaches, Barcelona's tapas or Seville's flamenco?

While Spain's most remarkable cities are worth a visit, so is experiencing the delights of something smaller: un pueblo. Many of the Mediterranean country's villages, or pueblos, are exceptionally beautiful. In fact, there are so many gorgeous Spanish villages, it was difficult to narrow down this list.

However, we’ve selected 15 of the most stunning villages in Spain ideal for a charming and relaxing vacation. Some are in the mountains, some close to the seaside and some just a quick trip from a city like Madrid, Seville or Barcelona. Although many of these destinations are accessible by public transport (buses and trains), it may be best to rent a car in order to visit these villages with more ease.

For more travel tips, news and advice, subscribe to our free daily newsletter.

Take a break from the all-inclusive beach-and-beers fun in Benidorm or the crowded sands of Alicante to visit the nearby sparkling seaside village of Altea.

This whitewashed hilltop village couldn’t be more different from the high-rises of its neighboring beach towns. Wander the rocky coastline, then walk up the steep steps to the old town for panoramic views. Stop and admire the Church of the Virgin Consuelo; its blue dome brightly juxtaposed against the whitewashed walls is reminiscent of the Greek islands.

Perched at almost 4,000 feet, the medieval walled village of Albarracín is pending UNESCO World Heritage status. The castle, main square and cathedral are the hot spots to see, but meandering the cobblestone streets and getting a little lost may be the best way to enjoy the village.

One of Costa Brava’s most picturesque gems, Cadaqués is inside the Parque Natural del Cap de Creus, a nature preserve rife with hilly hiking trails and panoramic viewpoints.

If the village looks vaguely familiar, it was used as a backdrop by artists such as Salvador Dalí (he was born and buried in the nearby village of Figures) and Joaquín Sorolla, known for his seascape artwork.

Strolling the village's cobbled streets is a joy in itself. However, the best way to see Cadaqués is high above from varying viewpoints, so put on your hiking boots and start climbing for a memorable photo.

Related: From Crete to Croatia: 11 best hiking spots in Europe

Home to a medieval castle and fortress, Alcalá del Júcar overlooks the Júcar River and Gorge.

Besides soaking up the traditional Spanish village atmosphere, explore the Cuevas del Diablo, caves built into the side of the mountain rock. Even during the hottest of summer days, it’s a cool 65 to 70 degrees Fahrenheit. Make sure to cross the famous Puente Romano, a bridge that actually wasn’t built by the Romans but is still a very special piece of historical architecture.

Take a break from Gran Canaria’s sunny beaches to head inland for a bit of village charm.

Weave along the winding mountain roads inland to Tejada, where the white-walled, red-roofed homes and buildings sit amid the greenery of the island’s mountainous interior. Once you’ve checked out the village’s hot spots like the Abraham Cardenas Sculpture Museum or the Medicinal Plants Centre, head to the surrounding area to hike around Roque Bentayga, a towering rock formation.

Related: 7 reasons you need to visit the Canary Islands

The 10th-century village features a few stone towers, a hilltop castle, a Plaza Mayor and modern touches like a few colorful murals. For a little more action, head to the slightly larger, nearby town of Haro, which features a wine museum. Don’t miss tours and tastings at neighboring wineries like Bodegas Riojanes and Bodegas Castillo de Mendoza.

Bathed in moss and surrounded by verdant countryside and mountains, the stone village of Potes is famous for its arches and the Deva River, which runs right through the village center.

After enjoying the picturesque old town, you’ll definitely want to explore the nearby outdoor landmarks, such as the nearby climbing spot and limestone peak Naranjo de Bulnes. Eating in the village is a must: Plan to sample Cantabrian specialties like chickpea pies and stews, as well as Cantabrian game.

It doesn’t get more traditional than Galicia’s fishing village of Combarro, located in the Rias Baixas area.

It features the customary Galician architecture hórreos, homes set upon stilts. There are more than 60 of them throughout the village, many of which are used as granaries or for food storage.

Keep an eye out for the cruceiros, special granite cross landmarks, as you lap the village and its surroundings. Eat as much seafood here as possible — shellfish and pulpo gallego (Galician-style octopus doused with paprika) are especially revered in the region.

It’s not easy to pick the most beautiful village in Andalusia — Arcos de la Frontera and Mijas are strong contenders, among others.

However, Setenil’s unique geography makes it one of the most impressive. Its focal point is a hilltop castle that was once an Arab fortress. The village's white buildings are built directly into the cliffside rock, resulting in an original, cavelike structure.

Stop by one of the bars with outdoor tables set directly under the rock caves.

One of the most colorful villages in Spain, Hondarribia spans the Spanish/French border.

Enter through the stone Santa María gate to admire the walled, vibrantly hued village center, then visit the sandy shores of Hondarribia Beach, which are just north.

Wine enthusiasts shouldn’t miss visiting the vineyards in the region which produce one of Spain’s most underrated wines, Txakoli. This is a very dry, slightly bubbly white wine with a low alcohol content — taste the variety and add on a tour at the nearby Hiruzta Winery.

Related: These are the best beaches in Spain

One of northern Spain’s most delightful fishing villages, Cudillero is bright and compact, backed by green hills and close to beautiful sandy beaches.

Climb up to the Garita viewpoint to admire the village, lighthouse and the sea beyond. There isn't much in the way of activities in Cudillero, but that’s all part of its charm. Sit outside with a glass of sidra (the region’s famed apple cider) paired with Asturian chorizo and cheese, chat with locals and enjoy the peaceful ambiance of the village.

A short distance away from one of Mallorca‘s other incredibly gorgeous villages, Valldemossa, Deia is set high in the Tramuntana hills overlooking the glittering ocean.

Known for its thriving art and music community, Deia is more than just a historic village. It’s also a place for creatives to feel inspired by the elements: the mountains, the sea and the idyllic stone buildings stacked along the hill.

Despite its small size and population, there are a number of interesting art galleries and boutiques, plus a thriving Mediterranean dining scene.

The highlight of the tiny village of Guadalupe is the monastery of the Virgin María de Guadalupe. The monastery features frescos from famous Spanish painters such as Zurbarán, and its museum showcases works from Goya and El Greco.

The monument's exterior is just as impressive, featuring a mix of architectural styles like Baroque, Gothic, Renaissance and Mudejar. Make sure to relax with a cold drink in the main plaza facing the famous Tres Chorros fountain.

Spain is home to thousands of castles, so a small village with a castle is hardly a novelty in the country. However, Olite’s castle stands out from the rest.

Its many turrets and towers take you right back to the Middle Ages -- adults will have just as much fun as kids exploring this extraordinary royal landmark. The castle was so iconic it even featured hanging gardens and a zoo with lions, giraffes and camels in its heyday (the 15th century). The castle overlooks vineyards, too, so enjoy a wine tasting while you're there.

Arrive at Buitrago de Lozoya, one of Madrid‘s most popular escapes, in under an hour from the capital. The village is surrounded by the Lozoya River, enclosed by Moorish walls. As you probably expect, Buitrago features a castle (a key feature of most Spanish villages) and a clock tower. There’s also a museum featuring works by Picasso. Hikers should head to the nearby Cuenca Alta del Manzanares Nature Reserve to trek or leisurely stroll through the wooded, mountainous scenery.

Spain teems with incredible beaches and lively cities — but don’t forget about the pueblos scattered throughout the country.

Spanish villages emit a very special kind of small-town charm perfect for a relaxing vacation — and most feature landmarks like castles, cathedrals and clock towers just waiting to be explored.