These are the 6 cheapest 5-star hotels in the world

Articles
Caroline Tanner covers news and travel for TPG. She is a journalism graduate of Mizzou and Northwestern.
Follow
Sept. 29, 2021
•
8 min read 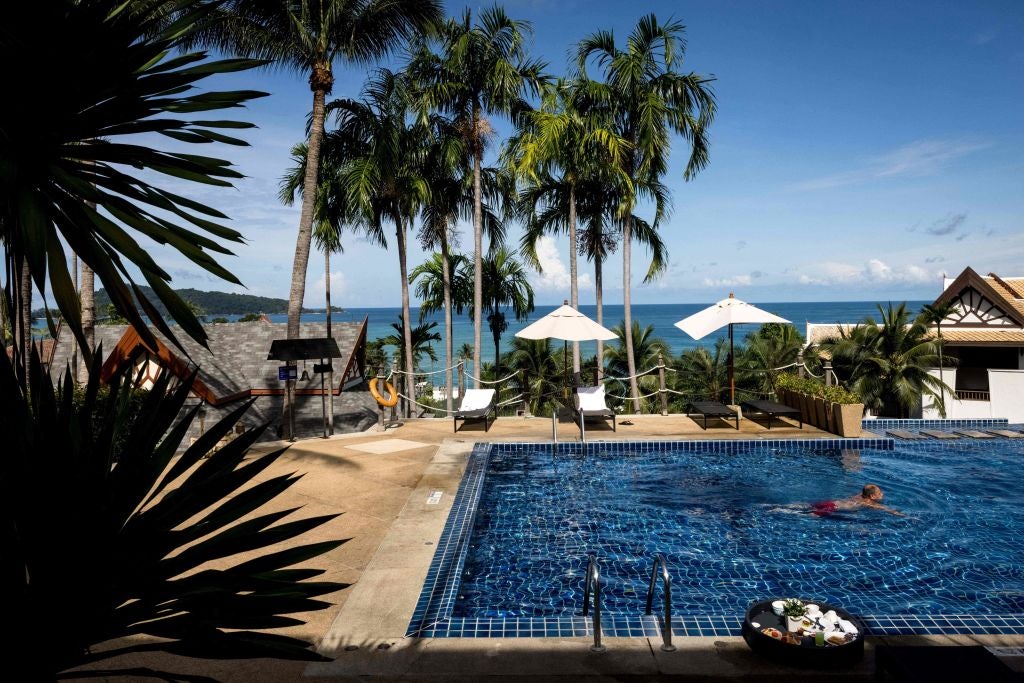 Financial insights blog Top Dollar surveyed five-star ranked accommodations on Hotels.com in every country for a one-night stay in July 2021 for two guests.

Hotels.com awards stars based on hospitality standards issued by the Automobile Association, which grants five stars to hotels that provide the below at a minimum:

For hotels in Europe specifically, Hospitality Europe requires hotels to meet even more qualifications to be given five stars, including that guests receive flowers or a present upon arrival.

To compile this list, the research team at Top Dollar did not account for any sale prices and their search did not include countries with five or fewer five-star hotels. Equally priced hotels within the top 10 were ranked by favoring the room with more square footage.

"A 5-star rating is defined as luxurious décor and furnishing throughout, multiple dining options, a large selection of high-end services, in-room amenities, and on-site facilities such as a health club," said Shannon Lovich, Head of PR and Social, North America at Hotels.com, who added that they will assign a property rating to properties without official start ratings.

"Hotels.com proprietary ratings are determined using international industry standards for hotels, bed & breakfasts and other types of accommodations," she said. "Our teams review a property’s photos and the facilities, services and amenities available at the property—this information is then used to calculate a rating level. The Hotels.com proprietary rating is based on amenities provided in the standard double room type or equivalent."

Related: An ideal hotel card for a brand-agnostic traveler: A review of the Hotels.com credit card

The cheapest five-star hotels on each continent

Rest of Asia and Oceania: Novotel Ahmedabad Hotel in India, $28 per night

In western India in Ahmedabad, the largest city in the state of Gujarat, the Novotel Ahmedabad Hotel is an Accor property well suited for business travelers, with close proximity to the Sarkhej-Gandhinagar Highway, the Sardar Vallabhbhai Patel International Airport (AMD) and industrial hubs like Sanand, Gandhinagar, Changodar and Kadi. Non-business travelers will find shopping malls and entertainment centers nearby, along with an on-site open-air swimming pool, fitness center and a Japanese/Korean restaurant. It's also pet-friendly.

A test search for dates in October found rates as low as $48 per night for a high-floor room with a king bed, ergonomic workspace and a 10% discount on food and beverage.

Related: The best Hotels.com properties for your fall trip

Hotel Ickale in the Turkish capital of Ankara is the lowest-priced hotel in the region, geared toward travelers looking to relax and rejuvenate without the hefty price tag usually associated with doing so. Guests can enjoy complimentary spa services, including a Turkish bath, swimming pool and a vitamin bar. I do believe this is the first vitamin bar I have come across thus far. This hotel is part of the Ickale Group, which also includes the Spice Hotel & Spa along the coast in Antalya.

"You will be rejuvenated and feel reborn through the natural gifts utilized in a room illuminated with candlelight and surrounded by exotic scents," says the hotel. "Indispensible Bali Massage of the Far-East, aromatherapy inspiring unique feelings via plenty of stimulating scents and reflexology massage are all available in Hotel Ickale. Be ready for a rebirth."

Guests arriving at Ankara Esenboga Airport (ESB) can reach Hotel Ickale in about 40 minutes by car.

Rates for a queen room in January 2023 started at $36 per night, which includes a city view and balcony, minibar, free Wi-Fi and 2 p.m. checkout, among other features.

Read more: Luxury on the cheap: 16 incredible Bangkok hotels you can book with points

Africa: The Steigenberger Resort Achti in Egypt, $40 per night

Although nine African countries offer five-star hotel accommodation for less than $100 per night, the lowest-priced five-star hotel in Africa is actually in Egypt thanks to the Steigenberger Resort Achti in Luxor, which is known as the "world's greatest open-air museum." The resort, which is part of the Deutsche Hospitality group, is located in a tropical garden along the east bank of the Nile River and only a few minutes from the city center, where the hotel suggests visitors explore the "Nile and the surrounding countryside and Valley of the Kings, float over the city on a hot-air balloon or take a felucca ride on the Nile to discover the ancient ruins."

In looking at rates for October, I found a classic room with two double beds starting at $44 per night, which includes a balcony overlooking Luxor, desk, free Wi-Fi and a flat-screen TV. Guests can enjoy the hotel's two outdoor pools, poolside bar and fitness center, roughly 7 miles from Luxor International Airport (LXR).

NH Collection's WTC Royal property in Bogota is one of four NH hotels comprising the cheapest hotels in South America. Roughly 25 minutes from the El Dorado International Airport (BOG), the property is conveniently located in Bogota's 100th Street business district, sitting next to the city's World Trade Center. It is walkable to the upscale Parque 93 neighborhood, which features highly rated restaurants such as Las Cuatro Estaciones, La Fragata Giratoria and Pajares Salinas, in addition to various gardens, independent cafes, galleries and department stores. All rooms have rain-effect showers.

For a stay in November, rates start at around $70 per night for a queen room, with in-room comforts like an espresso maker and minibar and complimentary breakfast.

The majority of the 16 hotels less than $100 in Europe are located in Central and Eastern Europe, including the Kupava Deluxe Hotel in Lviv, Ukraine. The Deluxe property is centrally located in western Ukraine, about a 25-minute walk to the Old City and nearby tourist sites such as the Armenian Catholic Cathedral, National Academic Opera and Ballet, Beer Brewing Museum and 19th-century Lviv Town Hall. It's also a 15-minute walk to public transportation and 3 miles to Lviv Danylo Halytskyi International Airport (LWO).

You could travel as soon as next week and book a room with two single beds for $47 per night, which also includes a balcony, free toiletries and slippers.

Perhaps unsurprisingly, the most expensive hotel on this list is in North America, where rooms at Hotel 1970 Posada Guadalajara in western Mexico start at $79 per night for a king bed. The Hilton hotel underwent a $6.5 million renovation in 2018 to combine classic Mexican and contemporary design styles, such as locally made headboards. Roughly 6 miles from central Guadalajara, foodies will enjoy Jal by Hueso restaurant, compliments of award-winning chef "Poncho" Cadena, and drinks at Se7enta – Azotea, a rooftop bar overlooking the city. The closest airport is Miguel Hidalgo y Costilla International Airport (GDL), which is about 30 minutes via taxi.

The hotel's king-sized room remains at the $78-per-night rate, including over the Thanksgiving holiday, where you're sure to get a good night's sleep thanks to the hotel's 250-thread-count sheets and blackout curtains.

Read more: 11 of the best hotels in Turkey, from Istanbul to Cappadocia

Remember that this search was conducted in July 2021, so while the cheapest deal listed may not be available for your preferred dates, you're likely to still find incredible deals for these five-star properties. If you are looking to travel elsewhere, be sure to check out the maps that list the 10 cheapest hotels on each continent.

Related stories
Aer Lingus returns: Hartford gets back its nonstop flight to Europe
Top 10 LGBTQ-friendly destinations for 2022
The 5 best credit cards for Walmart shopping
Watch out, Royal Caribbean: This cruise line is bringing more big new ships to North America
Featured image by AFP via Getty Images
Editorial disclaimer: Opinions expressed here are the author’s alone, not those of any bank, credit card issuer, airline or hotel chain, and have not been reviewed, approved or otherwise endorsed by any of these entities.