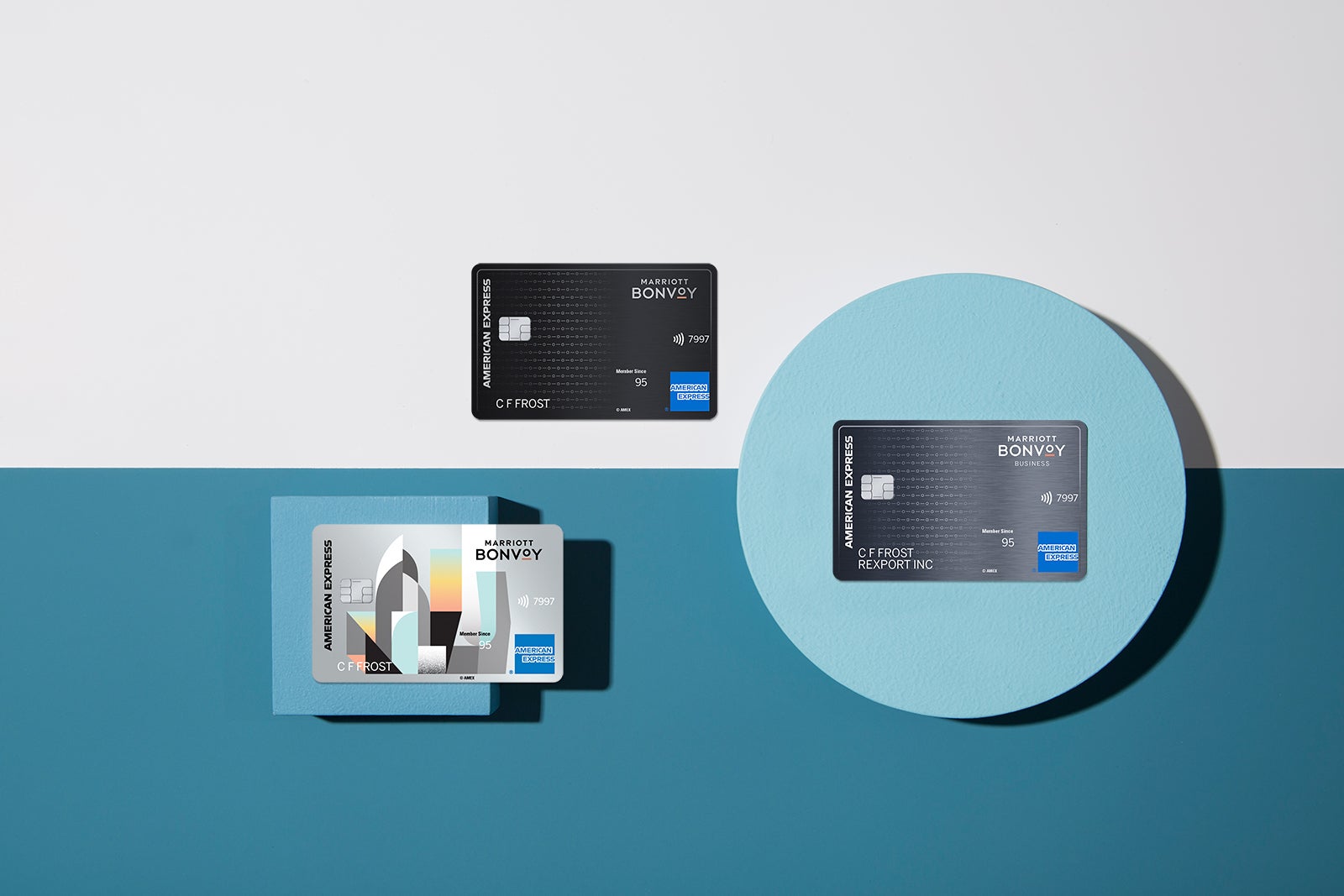 Many travel rewards credit cards have superlative-laced names that include words like Plus, Preferred, Premier and Reserve that can make it hard to differentiate them. On top of that, card issuers and the brands they partner with are making things even more difficult, like Marriott recently rebranding its loyalty program.

What’s in a Name?

Another easily discernible difference? The JetBlue Plus versus the JetBlue Card. Of course the Plus is going to be a nicer version of the regular card. Or the Amex EveryDay® Credit Card from American Express versus the Amex EveryDay® Preferred Credit Card from American Express. Something that’s preferred is going to be more exclusive.

The information for the Amex EveryDay, Amex EveryDay Preferred has been collected independently by The Points Guy. The card details on this page have not been reviewed or provided by the card issuer.

Those are just a few examples. But it doesn't end there. Here are some of the most confusing naming schemes among the major travel rewards credit cards, and the differences you should know about.

Let’s start with the latest development. As part of the combination of Marriott Rewards, Starwood Preferred Guest and Ritz-Carlton Rewards programs into the new Bonvoy program, Marriott also decided to rebrand its credit cards. It made sense for the chain to standardize its offerings by converting existing card holders and offering newly branded cards to future potential members. They also changed the benefits of some of the cards, while sticking with both Chase and Amex as issuers.

In the short term, that means a lot of confusion for card holders. Here’s a handy graphic showing the Amex cards being converted:

The odd one here: the relatively new Starwood Preferred Guest Luxury Credit Card from American Express is now the Marriott Bonvoy Brilliant® American Express® Card. On its own, that doesn’t sound too complex. But consider that Marriott is also changing the names of its Chase cards as follows:

In this case, card holders are getting hit with the perfect storm of a loyalty-program merger and overhaul, agreements with two issuers, and a marketing department that’s far too fond of the thesaurus.

Hilton Honors dropped an extra “H” in its reward program name a couple of years ago. Then it dropped its association with Citibank to launch a slate of credit cards with American Express in January 2018.

Among the cards were two similarly named ones that continue to confuse card holders to this day. The Aspire card is more expensive and richer in benefits than the Ascend, so you’d have to Ascend to the Aspire.

You can find a full review of the Hilton Honors American Express Aspire Card here, but the short version is: the card has a $450 annual fee (See Rates & Fees), earns up to 14 points per dollar, and comes with perks like Hilton Honors Diamond status, an anniversary free weekend night at almost any Hilton worldwide, up to $250 Hilton Resort statement credit each cardmember year, up to $250 annual airline fee credit, up to $100 Hilton on-property credits and Priority Pass membership. Enrollment required for select benefits.

Our review of the lower-tier Hilton Honors American Express Ascend Card is here. This card has an annual fee of just $95 (See Rates & Fees), earns up to 12 points per dollar and has pared-down perks like automatic Hilton Honors Gold status, lower Priority Pass Select membership and a free weekend night only after spending $15,000 in a calendar year.

The Aspire is a clear winner given all the added benefits and a difference of only $355 in annual fees.

Capital One and Venture

Why Capital One ever named a card the Capital One VentureOne Rewards Credit Card is beyond me. It’s a nonsensical compound word that literally tells you nothing about the card and doesn't have anything to do with its earning structure.

The two key differences between it and the similarly named Capital One Venture Rewards Credit Card is that the Venture card earns 2 miles per dollar on every purchase and has a $95 annual fee, as well as perks like Global Entry or TSA PreCheck application fee reimbursement (up to $100). The VentureOne earns 1.25x miles per dollar and has no annual fee.

Citi – Are You Preferred, Premier or Prestige?

Citi’s three ThankYou Rewards-earning cards have likewise confusing names. They are pretty simple to keep straight, though. The Citi Preferred is the $0 annual fee card, with points that you cannot transfer to the program’s travel partners. It's also no longer open to new applicants — it's been replaced by the Citi Rewards+® Card.

As its name might suggest, the Citi Prestige® Card is the top of the heap. It now offers 5 points per dollar on airfare and dining, 3x on cruises and a $250 annual travel credit good for all travel. It continues to offer a 4th Night Free benefit on hotel stays (that can be used twice per calendar year) and a Global Entry or TSA PreCheck application fee reimbursement. Its annual fee is $495.

Is Plus or Premier a Priority with Southwest?

Instead of getting into the granular details here, you can check out this post with a direct comparison of all three. The one standout fact you should take away is that the new Priority comes with more perks than the other two cards, such as a higher anniversary bonus of 7,500 Rapid Rewards points, a $75 annual Southwest travel credit, four annual upgraded boardings and 25% back on inflight drinks and Wi-Fi. It also has the highest annual fee of $149.

Is Your Business Preferred or Plus? Ask Chase

Chase introduced a whole new level of bafflement to its business cards when it unveiled the Ink Business Preferred Credit Card a few years back, in direct competition with its own Chase Ink Plus business credit card.

The Ink Plus is no longer longer available, so the Preferred won. But if you had the Plus, you can still apply for the Preferred. It has the same $95 annual fee as the Plus. However, its earning structure is a lot simpler. Card holders earn 3 points per dollar on the first $150,000 spent in combined purchases on travel, shipping purchases, internet, cable and phone services, and on advertising purchases made with social media sites and search engines each account anniversary year. That's versus a convoluted 5x/2x/1x structure with the old Ink Plus.

There are some other significant differences, but you can check out our full review of the Chase Ink Business Preferred.

Both World of Hyatt and IHG Rewards introduced new credit cards meant to replace older versions in the past year or so.

The information for the IHG Rewards Traveler card has been collected independently by The Points Guy. The card details on this page have not been reviewed or provided by the card issuer.

IHG has been pushing Select card holders to convert to the Premier, which has an $89 annual fee versus the old card’s $49, and only offers a free anniversary night at properties whose award nights cost up to 40,000 points each, rather than the nights good at any IHG worldwide available with the old Select card.

Still baffled? Read this post on why you shouldn’t convert. Or if you are thinking of applying for the Premier, read our review.

Like IHG, Hyatt has been trying to get holders of the old card to upgrade to the new one along with an annual fee that increased from $75 to $95. The new card does offer enhanced benefits like earning up to 4x points per dollar at Hyatts versus the old card’s 3x cap, plus 2 points per dollar on airline, local transit purchases and gym memberships.

While the Chase Freedom card (No longer open to new applicants) has been around for years and years, Chase unveiled a different version called the Chase Freedom Unlimited a couple of years ago. The two cards are quite similar beyond just sharing a name.

Both have no annual fee. Both earn cash-back Ultimate Rewards points that can be combined with transferable Ultimate Rewards points if you have another card like the Chase Sapphire Preferred Card or Chase Sapphire Reserve. However, the Unlimited version earns 1.5% cash back (1.5x points) on purchases while the old Freedom earns one point per dollar on most purchases, but 5% cash back (5x points) on up to $1,500 spend each quarter on rotating merchant categories. Which card is right for you depends on your spending habits. But one thing is for sure: it’s hard to remember which card is which or when to use what.

Credit cards are confusing enough without issuers and rewards programs introducing several similar cards with all kinds of bombastic modifiers in their names like Bonvoy Brilliant.

That’s why it pays to stay on top of loyalty programs. Every update and revamp is likely to mean new and improved--or at least additional and different--cards to choose from. At the very least, you should know which options are available for your specific loyalty programs of choice so that you can be sure to pick the best card or cards for your needs.