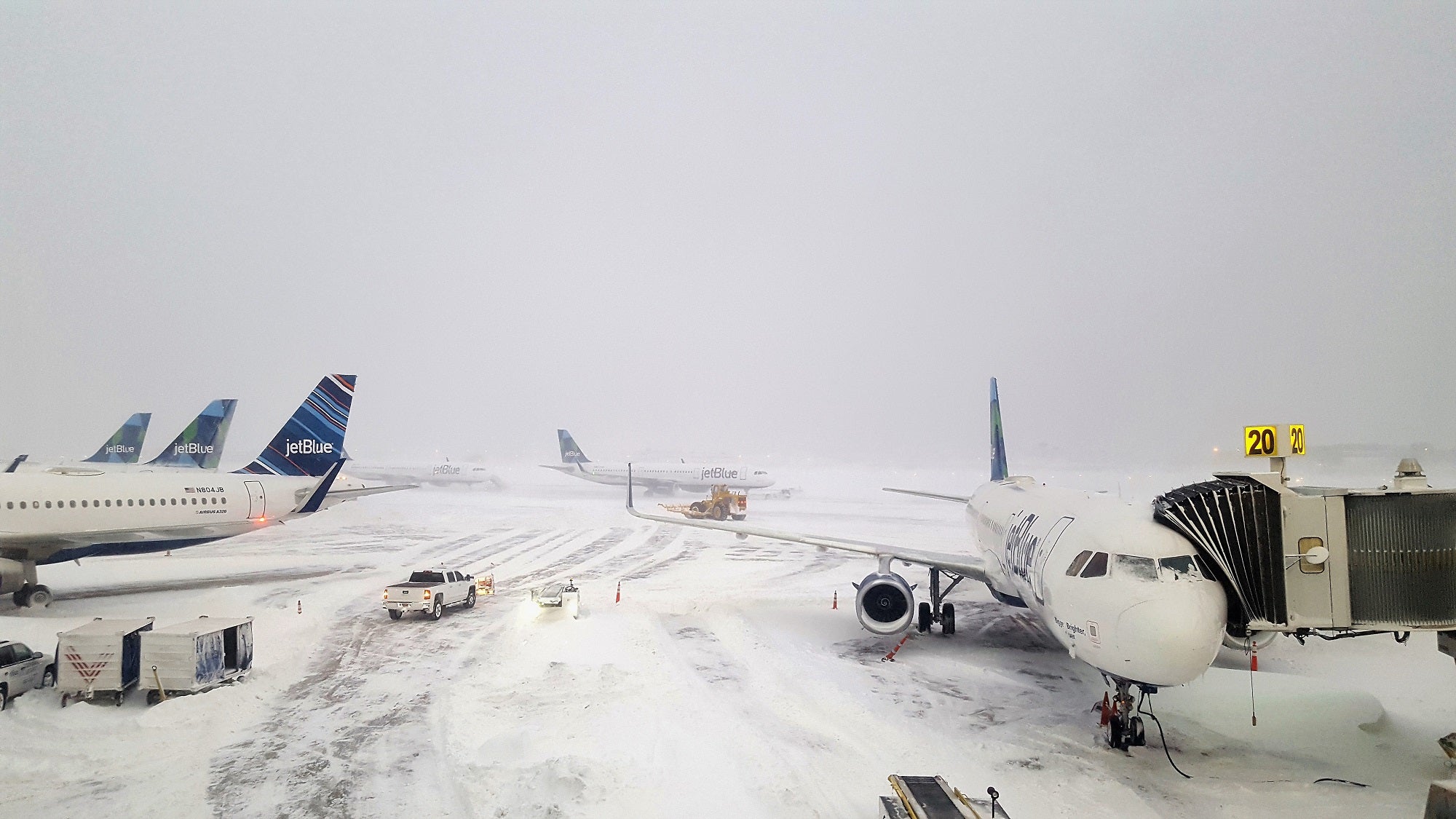 Remember the bomb cyclone from early January that cancelled thousands of flights, caused aborted landings, coastal flooding and led to the operational collapse of New York City's JFK airport? Well, a low pressure system churning in the Atlantic is forecast to undergo bombogenesis tonight. This storm threatens to bring high winds, coastal flooding and up to 24 inches of snow to parts of the Northeast on Friday and Saturday.

So far, we aren't seeing preventative flight cancellations for Friday and Saturday, but cancellations are sure to come as the storm's strong winds wreak havoc on air travel. As we saw with the bomb cyclone earlier this year, the strong winds are likely to cause air traffic control to limit the number of flights that can operate.

While this new bomb cyclone bears down on the Northeast, another storm is sweeping across California's Sierra Nevada mountains. Winter storm warnings have been issued across five western states, with some blizzard warnings issued for eastern California.

Thankfully, if you're scheduled to fly through the Northeast or parts of the West Coast, airlines are opening up options for flexible travelers. Seven US airlines have issued travel waivers, allowing travelers to rebook their flights to avoid the mess.

If you can’t delay your itinerary, airlines aren’t going to be responsible for paying for your meals or hotels in the case of weather-related delays/cancellations. But some top cards have flight delay/cancellation insurance that can reimburse you for weather issues, including the Citi Prestige ($500 per passenger for 3+ hour delay), the Chase Sapphire Reserve ($500 per ticket for 6+ hour or overnight delay) and Chase Sapphire Preferred Card ($500 per ticket for 12+ hour or overnight delay).

As of 9:10 Thursday morning, here are the travel waivers covering this storm:

No waivers (yet) from: Frontier, Hawaiian, Spirit.

Our points-obsessed staff uses a plethora of credit cards on a daily basis. If anyone on our team wouldn’t recommend it to a friend or a family member, we wouldn’t recommend it on The Points Guy either. Our opinions are our own, and have not been reviewed, approved, or endorsed by our advertising partners.
See all best card offers
Related stories
Guide
8 tips for booking the best cruise shore excursion for your money
News
Marriott’s 1st Luxury Collection all-inclusive, Nobu’s hotel empire and other hotel news you missed last month
News
Delta Air Lines unveils 2 long-haul routes from NYC to South America
News
The most romantic Valentine's Day hotel packages around the world