Just So Fly: Rock Stars In The Sky 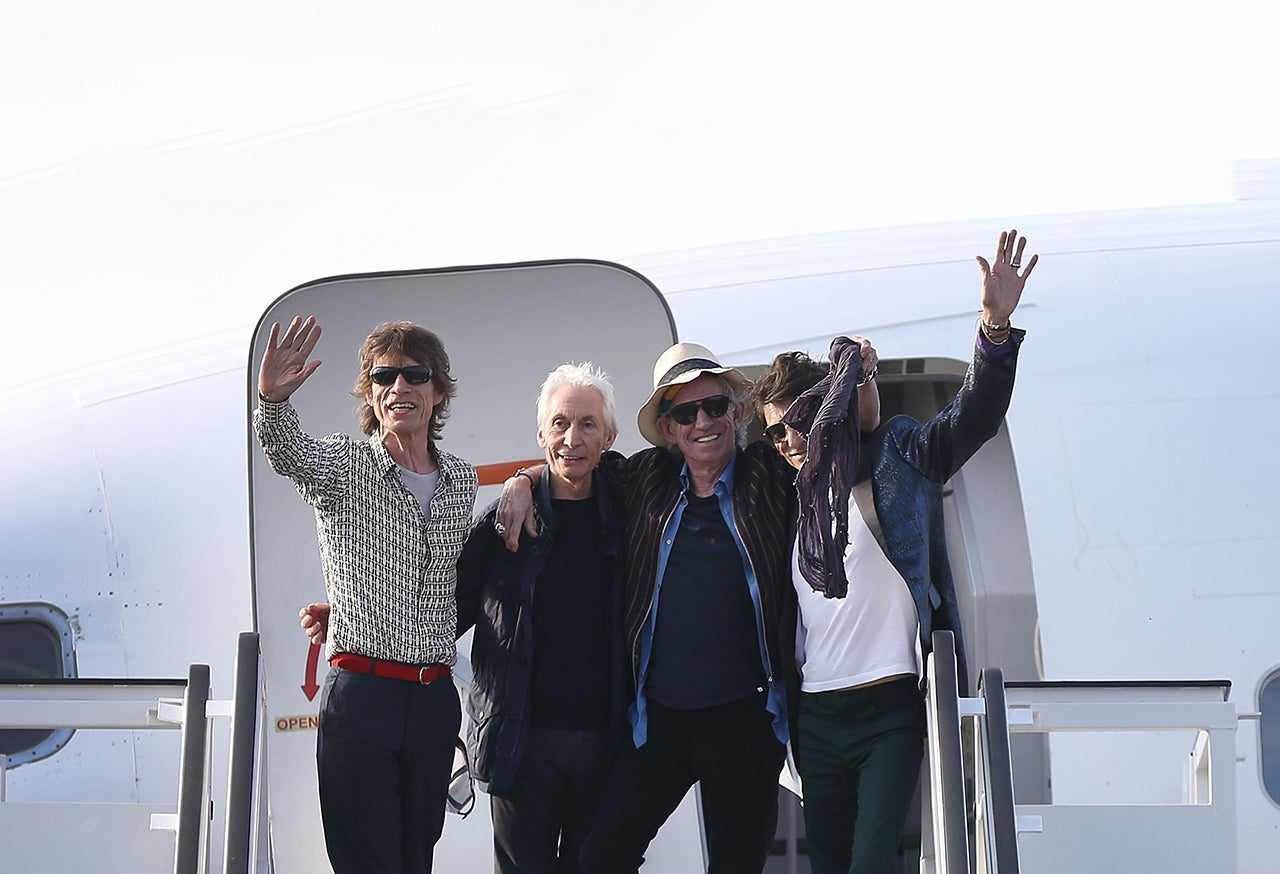 It was an electric night some years back in Paris and the Pet Shop Boys were late. There I was waiting for more than an hour in a sea of frustrated French fans at the Grand Rex theater wondering, "What have I done to deserve this?" Suddenly the boys sprung on to the stage: "So sorry Paris! Our plane was late leaving Berlin." Yikes: after more than 50 million albums sold, these boys could not afford to fly private?

I can't remember what was to blame — weather, maybe, or air traffic congestion — for the duo's delay but my thinning patience did beg the question: Isn't one of the perks and points of being pop music royalty to be able to ride over the rainbow at whim? While some rockers seem to roam the globe with enviable private jet abandon, others have been spotted flying commercial, at least occasionally. Kanye West reportedly once headed to Armenia in coach with wife Kim Kardashian. That would probably not do for Nicki Minaj: She loves her Gulfstream a lot, and is clearly unapologetic about flaunting it.

At the upper echelons of rock stardom — think The Rolling Stones or U2 — bands might charter an entire airliner from a charter operator, usually a midsize passenger jet converted with luxury interiors, to suit their needs and possibly soothe their egos. It's often when not on tour that the private jet option is more frequently exercised — although for pecuniary or other purposes sometimes regular old first class will do just fine. Well, unless maybe you're Courtney Love.

Earlier this century during a Virgin Atlantic flight from LAX to London, the Hole frontwoman refused to fasten her seat belt and swore at the first-class cabin crew. But Sir Richard Branson was lenient, saying after the incident that "Virgin Atlantic was built thanks to the rock industry" and that perhaps the airline's slogan should even be "Rock stars swear by us."

Indeed, the measure of how rocker-friendly an airline is may not be simply what on-board comforts it offers but how much unhinged behavior it will brook. Love was lucky, but Liam Gallagher is still banned from Cathay Pacific for life. It's probably safe to say that rock stars can get away with more shenanigans on their own plane than somebody else's. Maybe that's why Michael Jackson apparently had four of them. As for some others...

I once had to check out of a hotel in Montreal early because The Rolling Stones were going to be checking in — all of them. So it comes as no surprise that Mick and the boys would take over an entire Boeing for their touring needs. For their Zip Code tour in North America in 2015, they chartered a 737-400 from Phoenix-based Swift Air, which has plenty of experience flying sports teams around the country as well as the likes of Aerosmith and Miley Cyrus. Inside, it was configured with just 68 seats compared to about 150 in commercial service:

The Stones are known for sticking their signature logo to the outside of the planes they charter for tours, as they did on another 737-400 they chartered from Athens, Greece-based GainJet for the 2014 European tour.

You would think at this point Swift Air was an airline owned by Tay Tay, but no. Swift does need to get around quite a bit however, and when not pretending to saw the wing off her own plane she can lean on not one but two (that we know of) private jets of her own. One is a Dassault Falcon 900 tri-jet and the other is a Falcon 50. The former, built in 2009 and which cost a reported $40 million, has the singer's initials included in its registration number and her lucky number 13 emblazoned on the nose.

Rihanna likes her jets two ways: private and more private. RiRi does not do commercial (or if she does, it's very incognito). While its unclear if Rihanna has a jet to her own name, she has certainly graced a lot of private jets and tends to Instagram the experience of boarding and flying around in them, too. And who could forget the 777 tour, when she chartered a Boeing 777 from Delta Airlines and flew to seven countries in seven days? And was photographed on the flight deck?

According to Stratos Jet Charters, Bey gifted husband Jay-Z with a $40 million Bombardier Challenger 850, "tricked out with gorgeous living room with cream leather furniture, a master bedroom, two bathrooms, and a kitchen." We couldn't verify independently if that's really true — that would be a lot of stuff to cram into a business jet of that size. However it may be, the pair often fly together.

According to Air Broker Net, "the ticketing and concert management firm Live Nation expressed their appreciation and gratitude to Lady Gaga through a 757 private plane, complete with flight attendants, wireless internet connection, personalized Lady Gaga seat covers [they look like more like headrest covers] and sumptuous Italian fare." When Gaga learned the good news back in 2012, she "just cried on the tarmac." The jet wasn't hers to keep, though.

Talk about heavy metal: the famous band uses a Boeing 747-400, with a maximum takeoff weight of 870,000 lbs, to haul band members and crew, plus some 22,000 pounds of equipment, around the globe when on tour. Christened "Ed Force One", named for the band's mascot Eddie (who judging by the tail does not exactly look like Mr. Friendly) the jumbo jet is actually piloted by multitasking lead singer Bruce Dickinson, who has said "This machine enables us to do a European itinerary on an intercontinental basis. It's our time machine — our magic carpet." Dickinson knows his stuff: He is actually a licensed commercial pilot.

The Iron Maiden 747-400 takes off from the Schoenefeld airport near Berlin, on June 1, 2016. Photo by Tobias Schwarz /AFP/Getty Images)

According to the Evening Standard, U2 uses what is said to be the world’s largest charter-operated private jet, an Airbus A340-300, to hop around the globe. Private jet firm Air X Charter has the contract and maintains bases in England, Austria and Malta. Side note: A Learjet carrying singer Bono and friends had a bizarre accident in 2014 when its cargo door fell off in flight. No one was hurt.

Call them the queens of the skies, but apart from their legendary imperiousness, the two pop stars don't have much in common. Madonna has straddled the borderline between plebeian and posh: while she's been known to fly private, she has also been spotted flying commercial. TPG himself had a first-hand experience sitting behind the Queen of Pop on a British Airways First Class flight from JFK to London. Elton John reportedly prefers to charter a Boeing 737 for his globetrotting needs. And plain old in-flight entertainment doesn't cut it for the Nikita singer, either. According tothe Las Vegas Review-Journal, John and husband David Furnish regularly hire a noted comedian, stage name Pam Ann, to "don vintage airline costumes and comically curse out celebrities on their private planes."

Okay, so he's not really a rock star — in fact, we're not really sure what he is. Willful ambiguity aside, the Biebs does have an avowed proclivity for private jets. He's been know to flaunt a G4 on Instagram that isn't really his.

Related stories
8 mistakes to avoid when redeeming hotel points
Why you shouldn't open a store credit card during the holiday season
Where to stay at Disneyland: The best on- and off-property hotels
7 Apple Black Friday deals that deliver great savings on travel tech
Featured image by Getty Images