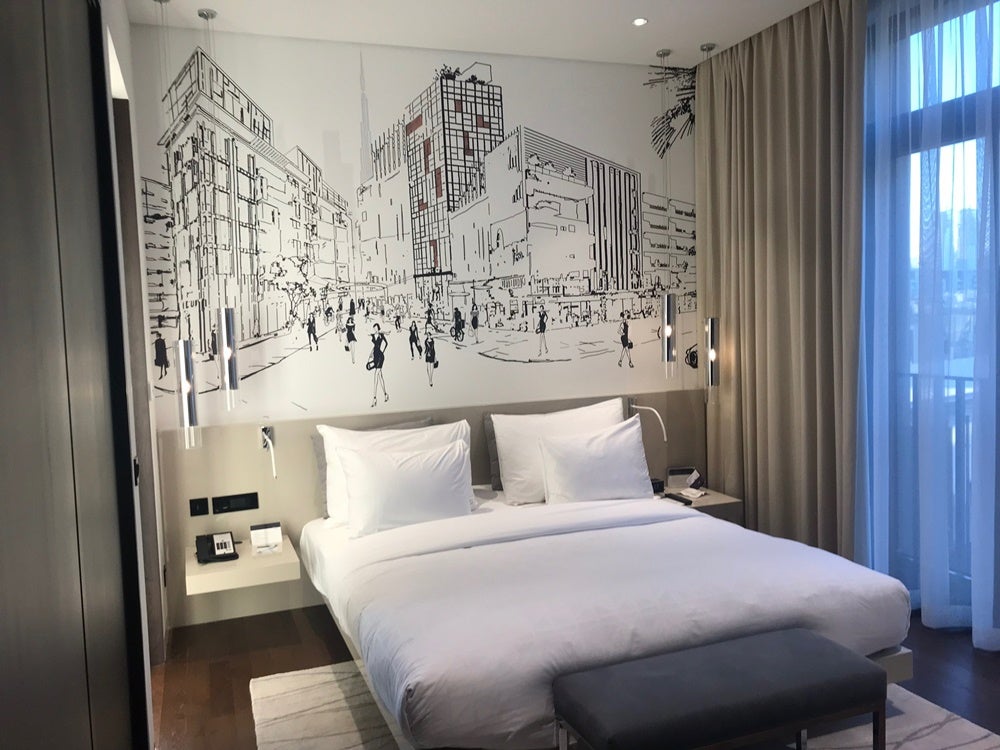 During a recent round-the-world trip with my parents, I wanted to stay somewhere special in Dubai, a city known for opulence and extravagance. But after realizing that the famous Burj Khalifa in Dubai was home to over nine different hotels, many of which had prices in the thousands for just one night, I decided that perhaps I didn't need to go crazy in the opulence department.

Instead, I chose to stay at the La Ville Hotel & Suites City Walk. This Autograph Collection Category 7 property was still elegant and comfortable but much more reasonably priced, especially when I compared it to an underwater room at the Atlantis, which cost almost $8,000!

I booked a premium guest room at the hotel via Marriott's site, paying a rate of 1,078 AED (about $293) per night for two nights. If I'd used points, it would've cost me 35,000 Marriott points per night for a deluxe guest room (the most basic room, one level lower than the premium room, which you book via phone if you want to use points). I booked my parents a suite, which cost 1,911 AED (about $520).

Thanks to my Platinum Elite status, I was upgraded to a one-bedroom suite, the same one I'd paid to book for my parents. Other perks included free internet, bonus points as my amenity and a late checkout of 4:00pm. I booked two nights because I was arriving at 4:00am and didn't want to have to wait until 2:00pm that day to check in. I used my SPG Amex to pay, which earns 2X Starpoints per dollar on Marriott purchases. Using this card is better than using the Marriott card, because even though the Marriott card gives 5X for Marriott purchases, I can covert Starpoints at a 1:3 ratio to Marriott Rewards, yielding me with 6 Starpoints per dollar spent at Marriott properties.

The City Walk mall was like a small city within the city of Dubai. The neighborhood had lots of shopping, restaurants and family attractions and many locals live there. In theory, it was close to the Burj Khalifa, but I would plan on taking an Uber instead of walking there — crossing the highways got complicated, and I ended up having to call an Uber half way anyways.

The staff immediately realized I was exhausted when I arrived. The agents processed my check-in very quickly, allowing me to head up to my room right away.

The suite was a corner room, and although it didn't have amazing views, it was spacious and filled with light.

I had a king bed, a separate sofa area and living area, a small kitchen space with a table and chairs, and a workspace with a desk and chair.

The bathroom was enormous, with double sinks and a freestanding bathtub. There was a small separate toilet and shower area.

The suite won extra points for the rainfall shower, which passed the TPG shower test! (I'm 6 feet, 7 inches.) I also had another half bath, although I didn't really use it.

The room also came with a robe, slippers, a coffeemaker and complimentary water bottles. The Wi-Fi was fast and reliable. I also enjoyed the Moooi shower amenities, which came in funky, circular packaging.

In general, the suite was incredibly modern. The sleek lines and updated furnishings really resonated with my style. I appreciated that it was well-lit, especially in the evenings, when the sun wasn't streaming in.

I had the choice of a few different restaurants at the hotel, but ended up dining at the Graze Gastro Grill, where my family and I enjoyed a light seafood dinner.

My other main meal was spent having tea at the Burj Khalifa, which is a touristy but fantastic experience. I highly recommend staying at the La Ville instead of the Burj. You can use your substantial savings in lodging costs to splurge on a fancy tea experience instead.

The hotel had a spa, the La Ville Relaxation Suites. I had hoped to squeeze a massage in, but as I really only had one day in Dubai, there just wasn't time. The property also had a fitness center and a rooftop pool, but I didn't a get a chance to visit either for the same reason I mentioned above.

I was pleased that the staff was so friendly, especially to my parents. When my mom wanted to get a blowout, they called a nearby salon to make an appointment, and then actually walked her outside to help her with directions, which was really above and beyond.

If you're looking for a place in Dubai that's not ridiculously overpriced, the La Ville is a modern Marriott property close to all the attractions and shopping. The staff is efficient and friendly, and the rooms are large and updated. What more could I want for a quick stay in Dubai?

All photos are courtesy of author.