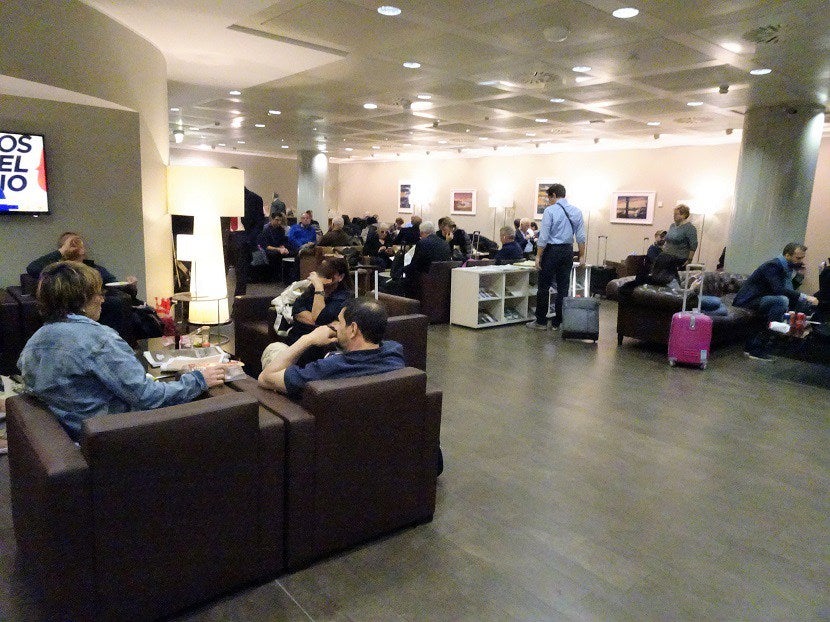 Review: Club SEA Sala Pergolesi Lounge at Milan Malpensa (MXP)
This post contains references to products from one or more of our advertisers. We may receive compensation when you click on links to those products. Terms apply to the offers listed on this page. For an explanation of our Advertising Policy, visit this page.

Got time to kill while flying through Milan's Malpensa airport? TPG Contributor J. Keith van Straaten did, so he checked out the Club SEA Sala Pergolesi lounge and reports his findings.

One of the most useful perks from my Chase Sapphire Reserve and The Platinum Card from American Express cards is membership in Priority Pass, with access to over 1,000 airport lounges. I use it all the time, and when my flight was delayed coming home from Milan Malpensa (MXP), I was glad to see on my Priority Pass app that there were two lounges that I could access for free. (There is a third, but it was not available to travelers on my route.) One was landside and the other airside, after security.

After passing through security, it's easy to see the signs to the lounge. But be careful: SEA, the company that runs Milan's airports and operates the lounge under their suite of "ViaMilano" services, has more than one lounge, and not all are accessible with Priority Pass. Stay off the path to the Montale lounge and keep going until you see Pergolesi, then it's up the elevator to the narrow entrance.

Two harried desk agents checked travelers in with neither a smile nor a welcome. My travel companion and I each showed our Priority Pass cards and boarding passes and were ready to enjoy the lounge within a couple minutes. Day passes are available for purchase for 35 euros ($39 USD).

Immediately on entering the lounge, it's easy to see this is not a great place to relax. It's one windowless room with low ceilings and a tile floor. While a few floor lamps add a little bit of mood lighting, it's hard to shake the impression that the airport never planned for this space to be used by the public. It was also difficult to find two empty seats.

Clusters of chairs and varied coffee tables were distributed throughout the room, with a buffet of food and drink along the back wall. A side wall held a counter with five tall chairs.

On the other side of the wall was a narrow hallway with bathrooms, showers and a tiny elevator. There were many chances to practice saying "Scusi" as passengers and staff navigated the corridor. A closet was provided for storage (no lockers). In addition to the monitors, flight departures were announced and many passengers cleared out after the announcement of a flight to Shanghai.

Amenities and Wi-FiThe lounge has two showers, but access is not included with Priority Pass. Certain flights on certain airlines (the agent wouldn't be more specific) get them free. Otherwise, the cost is 16 euros ($18 USD).

Free Wi-Fi was easy to connect to and tested at an okay speed of 7.35/2.30Mbps. Two TVs were on mute and a selection of newspapers and magazines in Italian and English were free for the taking.

All the food and drink was self-serve, with the buffet offering lots of tiny foods, none of them hot (though a microwave was provided for some reason).

Finger sandwiches were the closest thing to a main course and I saw more than one person stack them high on a small plate.

While nothing was spectacular, I was impressed with the abundance and variety. Cookies, crackers, cereal, chips, cheese, chocolate — all the best "c" foods were there. The packaged salads were surprisingly fresh and tasty and the fruit was ripe and crisp. The size and packaging of many of the foods was perfect for those who wished to sneak some out for the plane ride.

A coffee machine provided small servings of coffees and espressos. Some bottled beers nested with soft drinks in a refrigerator and a few Italian wines (red, white and sparkling) sat on the counter in front of a decent liquor selection. Four types of juice were on offer as well.

Overall ImpressionI was always aware that a worker was around, whether she was replenishing the buffet, cleaning the bathroom or clearing tables (I didn't see a dirty plate survive for more than five minutes). Though the desk staff didn't have the warmth or professionalism I would have hoped, the staff overall was busy at work — and with the size of the crowds, they have to be.The lounge is named after Italian composer Giovanni Battista Pergolesi, who was known for "his ability to handle large choral and instrumental forces," according to the Encyclopaedia Britannica. His namesake lounge hasn't quite demonstrated a similar skill at handling large groups of people in harmony. It's a nice enough tune, but not one that will have the audience shouting "Brava!"