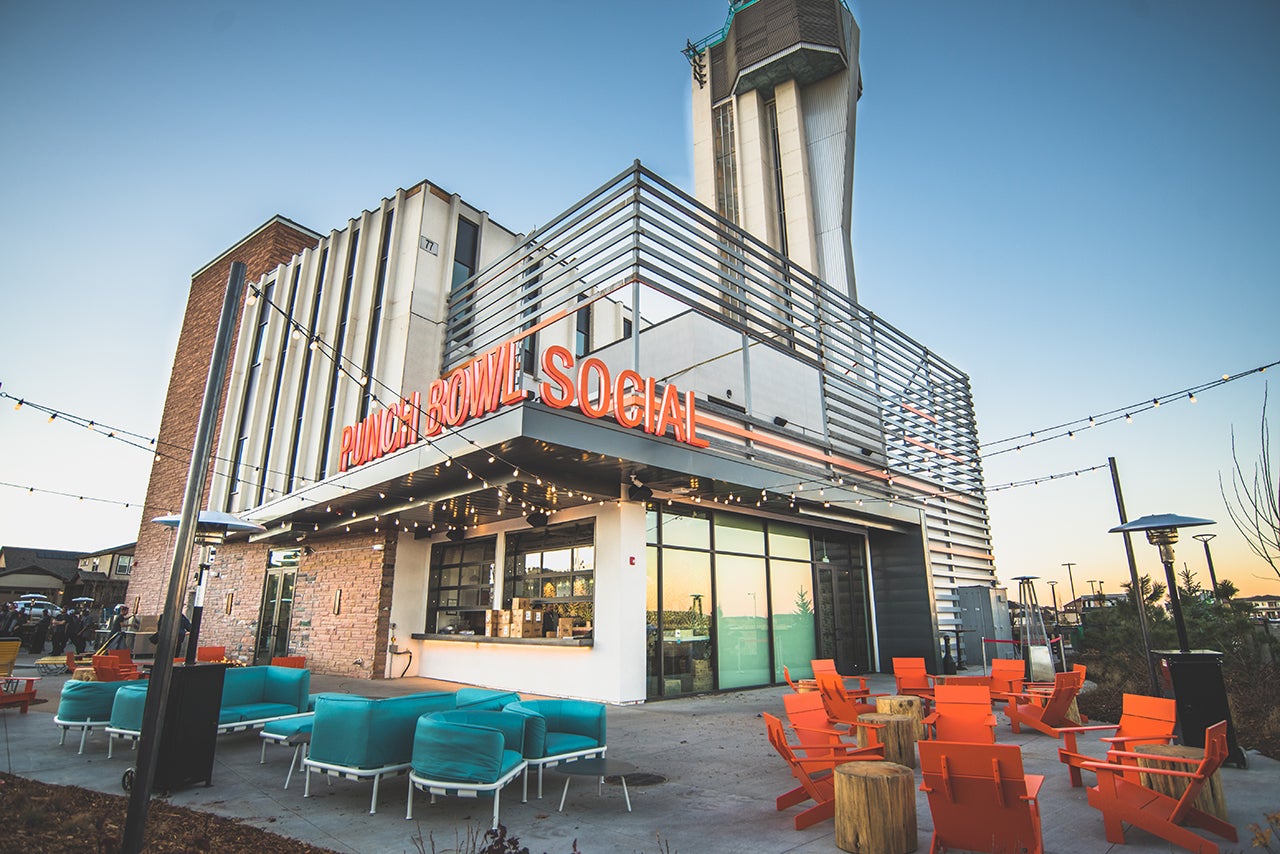 Abandoned Traffic Control Tower Is Now a Part of Denver Nightlife
This post contains references to products from one or more of our advertisers. We may receive compensation when you click on links to those products. Terms apply to the offers listed on this page. For an explanation of our Advertising Policy, visit this page.

Unless an Auntie Anne’s pretzel is your idea of gourmet grub, an airport isn’t the first place you’d think to head to for a great night out in Denver. But Punch Bowl Social, a playful restaurant and entertainment concept that just opened its tenth location in what used to be Stapleton International Airport’s air traffic control tower, is changing that perception.

For nearly 70 years, beginning in 1929, Stapleton International Airport was the main aviation hub for Denver area residents, until a host of issues — including a lack of space between runways, no room for physical growth and a lawsuit from nearby residents over the noise that the building created — led officials to decide to scrap what they had and build an entirely new airport from the ground up. While most of the airport’s structures were demolished to make room for a planned community that would take over much of the original space the Stapleton Airport had to offer, its air traffic control tower was saved. Then it was just a matter of figuring out what to do with it.

According to the venue’s owners, dozens of proposals for how to repurpose the historic tower have been presented over the years, with demolition being one possible option. That's when Denver city councilman Chris Herndon, who represents the residents of the Mile High City’s Stapleton neighborhood, came up with the idea of pitching a redevelopment of the building to Punch Bowl Social founder and CEO Robert Thompson.

"It has been an incredible effort, and more importantly an honor, to preserve the former control tower," Thompson said in a statement to the press. "We are intentional about seeking locations that have historic roots but need a new purpose. We've done it at our original location on Broadway in Denver and have projects in San Diego and Brooklyn that will also adapt historic properties for reuse as Punch Bowl Socials."

They’ve also made sure to include quirky nods to the building’s past in their design and décor choices: In addition to the painstaking process of removing, preserving and replacing the precast panels that adorned the original tower’s exterior. Inside, revelers will find vintage suitcases and other travel memorabilia to maintain what Punch Bowl Social calls a “golden age of flight” aesthetic within the building’s interior design.

Even the onsite restaurant, which is modeled to feel more like an old-school diner, makes it feel as if you’re flying 35,000 feet in the air with its kitschy menu — which includes an “In-Flight Snack” (aka chili-limed fried peanuts) — designed by James Beard Award-winning chef Hugh Acheson. While craft beer and cocktails like the Aviation (Breckenridge gin with creme de violet, Luxardo maraschino and fresh lemon juice) make the perfect diversion between heated games of Bonzini, Scrabble or shuffleboard.