5 Reasons to Go to Wadi Rum Desert in Jordan 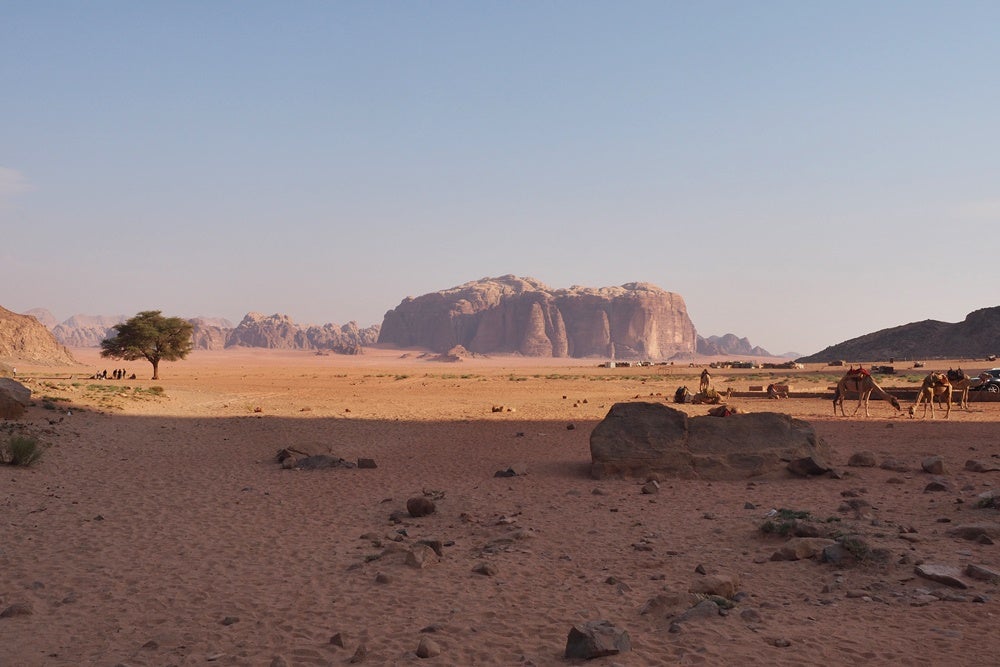 I'd been hearing about the wonders of Petra my whole life, and while I found it truly stunning, Wadi Rum turned out to be the surprise star of my trip to Jordan. This protected desert reserve in the southern part of Jordan, often called the Valley of the Moon, is known for its red-pink sands, stunning natural arches and mountains, and prehistoric rock engravings. Plus, it's just under a four-hour drive from Amman, less than a two-hour drive from Petra and also close to the border of Israel.

I discovered it on a recent four-night trip to Egypt and Jordan with my dad (one of my favorite people to travel with). We spent two nights in Jordan, one in Amman and the other at a peaceful, luxury camp in Wadi Rum. Our original plan was to simply sleep in Wadi Rum and spend the most time exploring Petra, a UNESCO World Heritage site famous for its role in Indiana Jones and the Last Crusade, but Wadi Rum just blew my mind so much I decided it needed its own story.

While I recommend you visit Petra, here are five reasons why you shouldn't leave Jordan without also paying a visit to Wadi Rum.

1. The Landscape Is Breathtaking

This beautiful red-sand desert is famous for its awe-inspiring sunsets, which peek through the mountain and rock formations at various angles, creating some of the best photo ops I've ever seen. You actually feel like you've left the Earth!

There are several high peaks there, the highest being Jabal Umm ad Dami, at over 6,000 feet. From the top, you can see the Red Sea and, on clear days, even the Saudi Arabian border. The territory is still home to a few hundred Bedouins.

You can either take a day trip here from Petra or spend the night in one of the cool desert camps, which is what we did.

You can check out my full review of the Wadi Rum Night Luxury Camp, where my dad and I each spent the night under the stars in our own a one-of-a-kind desert bubble. We booked fairly last minute and paid about $270 per night per bubble (including a camel ride and meals). I would have used my Citi Prestige to book had I been staying for four nights or more in order to get the fourth night free, but since I thought one night would suffice, I used my Chase Sapphire Reserve card to pay, earning 3X the points for a travel purchase. Unless you're a huge history buff or really into photography, a one or two night stay here is perfect.

The experience was tranquil and unique, but there are several other desert camps in the area, so you can find the right price and experience for you. There's something for every budget; I found places starting at $35 and going up to $800 a night. The Bait Ali Lodge ($80 per night) even has a pool, which is pretty amazing for the middle of the desert.

The guides took us out to a special rock formation at sunset where I got incredible photos. This is why I love traveling with my dad: Even though we were just sitting in silence, you don't need to say a lot to feel a lot when you're with family.

3. It's Less Touristy and Crowded

Petra is gorgeous, but it's teeming with tour groups. Wadi Rum was much less crowded than Petra, and I found it to be a truly peaceful escape. It was more expansive, and I had no problems getting photos of the landscape without people in them.

4. It's Loaded With History

People have called Wadi Rum home since prehistoric times. It was once inhabited by the Nabataeans, who left their mark in the form of temples, inscriptions and rock drawings. Khazali Canyon is famous for Nabataean etchings featuring humans and animals. In the 1970s, archaeologists excavated one of the most famous temples in the area, the Nabataean Temple. The Bedouins who live here now have been roaming this land of dry sands and extreme temperatures for many years, though now with more modern comforts.

I learned all this from great guides I booked via the American Express Centurion concierge, but you can actually book them directly at Wadi Rum. I highly recommend Mohammad Qamheyeh and his driver, Mahmoud Kahwaji, who will take you on your explorations in a Land Cruiser while narrating the story of the desert in near-perfect English. If you contact Qamheyeh directly, you can negotiate a rate based on your travel needs.

5. You're Basically in a Movie

Lawrence of Arabia was filmed in Wadi Rum, and on the outskirts of the reserve, you can explore the train and train station from the movie. We could climb on the train and pretty much did whatever we wanted. My dad and I even did a little filming ourselves.

Other movies like Rogue One: A Star Wars Story, Prometheus, Red Planet, The Last Days on Mars, Transformers: Revenge of the Fallen, Passion in the Desert and The Martian were also filmed here. Indeed, I felt like I was on planet Mars during most of my stay there.

All in all, I'm not sure I'd want to spend more than a night or two here again, but Wadi Rum is a truly special place that I recommend to any traveler to Jordan.

Have you ever been to Wadi Rum? Did you also feel like you were on Mars? Share in the comments section below!