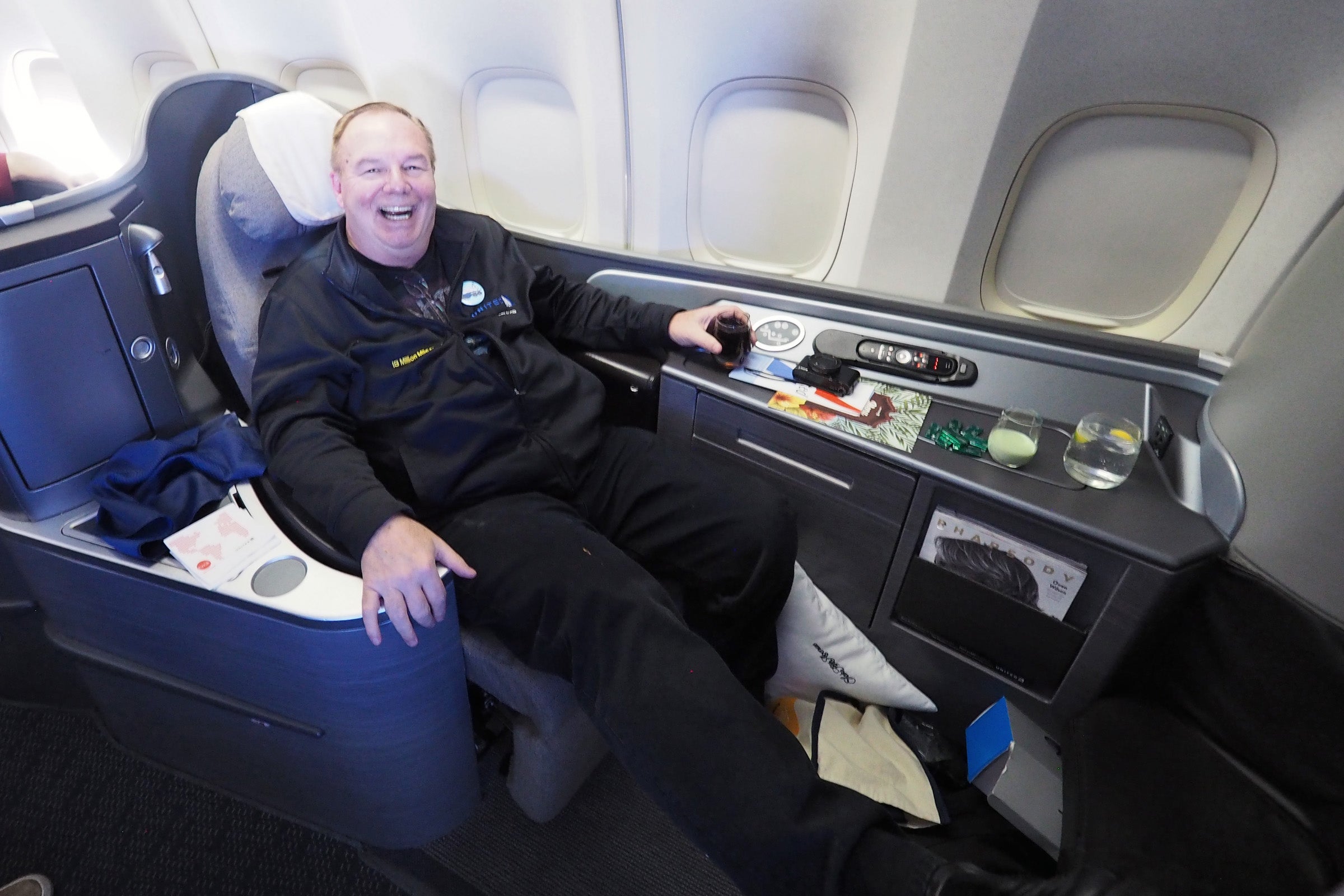 United's 18 Million Miler Talks About His '500 to 600' Trips on the 747
This post contains references to products from one or more of our advertisers. We may receive compensation when you click on links to those products. Terms apply to the offers listed on this page. For an explanation of our Advertising Policy, visit this page.

If there was one passenger that United CEO Oscar Munoz wanted to recognize on Tuesday's final 747 flight, it was Tom Stuker. He's a Global Services member, sure, but so were plenty of other lucky travelers on this week's farewell hop to Honolulu.

Tom, on the other hand, happens to be the airline's best customer — he's traveled nearly 19 million miles on United flights alone, having just hit the 18-million mark earlier this year. So, naturally, he and his buddy (and fellow Global Services member) Jason DiVenere got a special visit from the CEO, along with a parade of other United executives, flight attendants and passengers throughout the flight.

Tom, who is 65 and lives in New Jersey, works as a consultant for the auto industry, which often takes him to Australia. At about 20,000 miles a pop between Newark and Sydney via LAX or San Francisco and back, you can see how he got the humongous amount of miles he has.

I also had a chance to catch up with Tom — and, as it turns out, I ended up scoring seat 1A, which is where he had been hoping to sit for the final flight. I offered up some time in that prized seat in exchange for an interview, and Tom happily obliged.

Of course, the Queen of the Skies was the topic of the day — I'm not sure anyone's had more flights on a United 747, or maybe on a 747 period, than Tom himself, who stated that he's traveled on United's jumbo jet "between 500 and 600" times. You'd have to be a pilot to get that sort of number.

There were plenty of other interesting nuggets from our interview, too. Like the fact that he's not a fan of the upper deck and, in what would ordinarily be a frequent flyer sin, redeems his United miles for "20 to 30 thousand dollars a year" in gift cards.

How many times have you flown on United’s 747?

In 1A for most of the flights?

Actually probably not. Probably the most common seat I’ve flown in was 4C, the one I’m in now, because a lot of my flights were business back and forth to Australia, or with my wife back and forth to somewhere, so those two seats, especially with the original configuration, there was a table in front of 4C and 4D. It’s like your living room, you have a living room table in front of you and the flight attendants would put a bucket of ice and some Champagne right on that table for me for the flight, so I couldn’t complain. So those were my favorite seats.

Ever fly on the upper deck?

I think maybe twice, back in the day when I didn’t fly first, business was my first choice. But I always liked downstairs; upstairs never did it for me.

Everybody says ‘why don’t you have your secretary take care of it?’ No, I book every one of my flights myself, because if I go online they say that seat’s not available, I like this seat and to tell you the truth, as much as I know how to book online, I call the 800 number because I have great, great, great relationships with the Global Services people, they’re like a second family. Actually all the ones in Hawaii, I go out there once a year and we go out to dinner as a family, so I’m very close to the agents. Back in Detroit we used to have Christmas parties together, so I’ll take the long route, and take the 800 number. I know United would wish I’d do it online, but the relationships I have with all the Global Services agents, I love them.

What do you do with all your miles?

You’d be surprised how many friends you get when you have that amount of miles, but I use them for everything. Literally everything. On the MileagePlus side, I’ll literally buy $20,000-$30,000 a year in gift cards, I’ll do hotels, rental cars, the auctions — I love the auctions. World Series tickets were on the auctions this year, as a Chicago fan there’s suites to the Bulls, the Blackhawks.And MileagePlus, the things you can do with miles are unbelievable, so I use them for everything. Dollar for dollar, the best dollar you spend is on flying, without a doubt, but if you can’t use your miles for flying, there’s a million other things to use them for, and they’re right on United.com.

How many hours would you estimate that you spend each week on an aircraft?

Somebody’s done the math, because this is my third year I’ve flown a million miles in a year, so if you do a million miles, 500 miles an hour, that’s 2,000 hours, plus the time going to the airport, coming back from the airport and waiting in the airport for luggage, I think half my lifetime is somewhere on the way, in the airport or on a plane. Which is a pretty sad thing, but it’s not for me because I love to fly. I love the relationships I make with the other first class passengers, or the flight attendants and the Global Services people I know around the world are a second family. I’ve always said my United family treats me better than my own family.

By this time next year, Tom will be well on his way to having flown 20 million miles on United, assuming he hasn't already reached that milestone by then.