Meet the Man Who's Flown 18 Million Miles on United 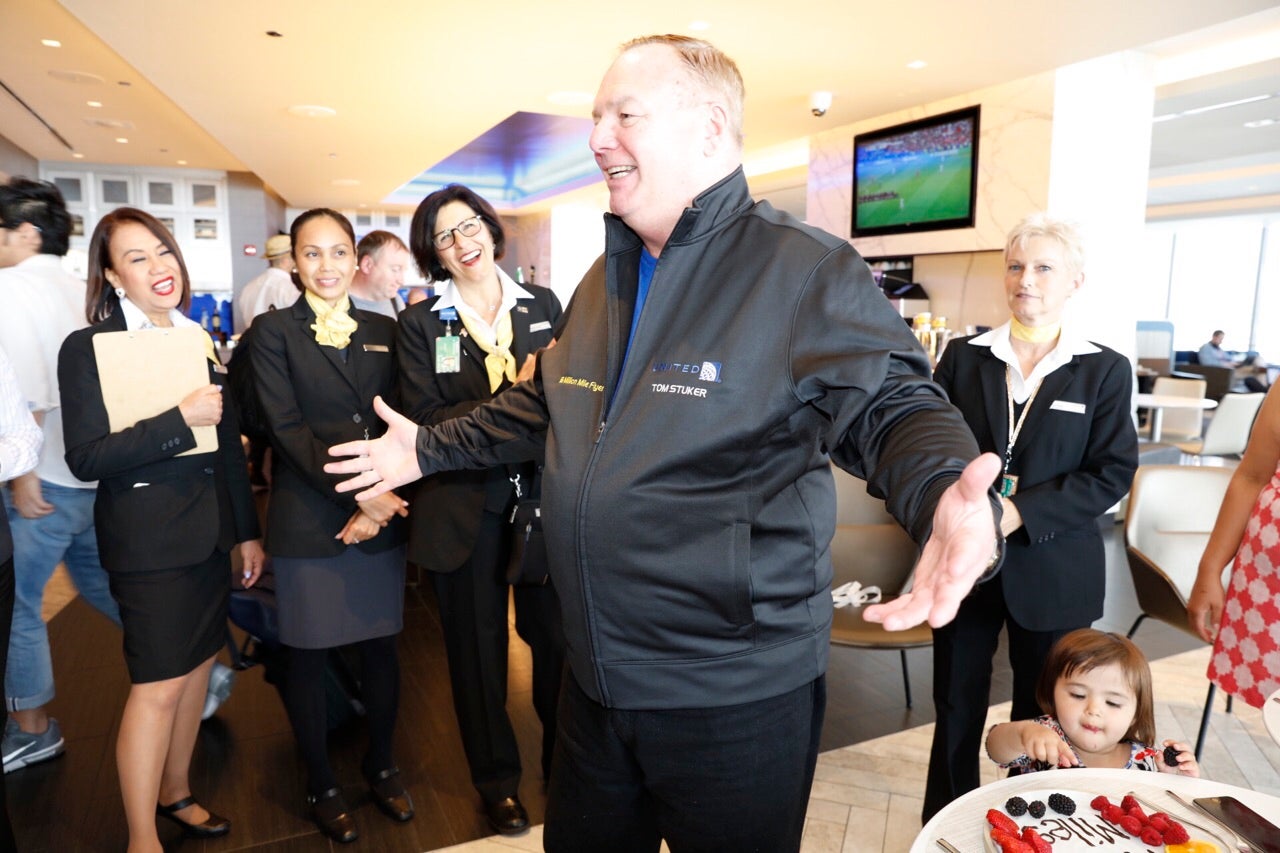 Meet the Man Who's Flown 18 Million Miles on United
This post contains references to products from one or more of our advertisers. We may receive compensation when you click on links to those products. Terms apply to the offers listed on this page. For an explanation of our Advertising Policy, visit this page.

Stuker spoke to The Points Guy as the airline prepared to celebrate his accomplishment with a gathering of his family and United employees at the Polaris lounge in Chicago (ORD) held earlier today.

"My first United flight was 1970 or '71," he said. "It was my first commercial flight ever, from Chicago to San Antonio. We dropped about 500 feet at one point — no one was hurt but for a first-time flyer I was scared a little bit."

While he's never had a serious issue in the air, he's experienced a few on-board incidents. "I've never been on a flight where the masks came down, but I've been on an aborted takeoff and an aborted landing," he said. "I've been on three different flights where someone died. One of the guys, I was talking to him, then he went to sleep and never woke up."

How does one end up flying 18 million miles? Stuker is an auto-industry sales and management consultant based in New Jersey, and his work takes him to many individual car dealerships around the world. He's flown to Hawaii over 100 times and to Australia over 300 times. "I’ve probably seen more of Australia than 95% of Australians," he said with a laugh.

After flying so many miles on United, Stuker is likely the world's utmost authority when it comes to the airline's planes and seats. "The three-class 767 is without a doubt my favorite aircraft," he said, while acknowledging it will soon be phased out in favor of two-cabin Polaris business. His preferred seat on the 767 is 1K, because "typically on an international flight, the pilot [off-duty rest seat] is in 2K with the drapes around him, so 1K feels like a private plane," he explained. "You’ve got five people in first class so the stewardess gives you plenty of attention."

What about the food? His favorite three dishes on United — in no particular order — are the lobster mac and cheese ("It's unbelievable, I love it!"), the cinnamon rolls they serve outside the US and the garlic bread. "One food I’m not liking is the salad," Stuker confided. "They’re getting too fancy with the salad. Apples and grapes and pears. They’ve got everything in it but lettuce and tomatoes. I’m actually thinking of bringing my own."

But eating on board depends on the timing of his flight. "Going to Australia, you’re taking off and its 1:30am New York time and I think I’ve had enough meals by 1:30 in the morning," he said.

When Stuker isn't traveling for work, he likes using his stash of United MileagePlus miles to take leisure trips with others.

"I’m able to use my miles to take my friends and family to places around the world. I’ve taken my son around the world twice," he said. And those trips aren't lacking in amenities. "What most people consider a honeymoon trip, I take six times a year with my wife."

Speaking of frequent flyer miles, just how many does he have? Stuker would prefer not to disclose an exact number, but he doesn't use them solely for flights.

"Obviously the best value in using your miles is for flying, but sometimes I'll redeem for gift cards because there’s only so much flying I have time for outside of work. I use miles for cruises, hotels, rental cars, auctions — United has great auctions."

Stuker is also involved in a cancer charity called Bailey’s Day in Albert, Australia, and donates his miles for the charity's auctions.

As a road warrior — perhaps the road warrior — Stuker doesn't focus on one single hotel chain as he does with his airline. But he still has plenty of annual hotel nights to earn elite status in multiple hotel loyalty programs.

"Right now I’m a lifetime Diamond at Hilton, a lifetime Platinum at Marriott and almost a lifetime Globalist at Hyatt," he said good-naturedly. "Though I think my streak of being Globalist at Hyatt is going to end this year because they raised it to 60 nights. But when I travel with my wife, I try to raise the bar a little more and stay at a Ritz-Carlton. I love the in-and-out properties where you have a swimming pool villa. When people ask what I like to do on vacation, I say 'as little as possible.'"

Stuker's accomplishments have become legendary over the years. He's been covered in the The New York Times, along with ABC News, NBC News and many others. An entire Flyertalk thread is dedicated just to him and is now approaching its eighth year of posts.

But when we asked Stuker if he has any tips on flying, his thoughts centered around being aware and respectful of others. "Try to be more conscious of your surroundings," he suggested. "If you're on the phone before you depart, the last three rows of the plane don’t have to hear it. If there’s someone older with a bag, why don’t you get up and help them put it up?"

The same advice goes for dealing with the airline's employees: "I’ve always found if you really treat people nice, then the service is out of this world. Like all of us, they like to be appreciated in their job."

What about all of United's recent bad publicity? "When people say 'I had a bad experience on United,' well, I had 9,000 great experiences,” Stuker said. "999 out of 1,000 people who I talk to at Global Services, I rate them a 10 out of 10. These people are like a second family to me. I really appreciate how hard they work."

With 18 million miles officially in the rearview mirror, Stuker shows no signs of slowing down — even after more than 45 years of flying.

"The latest I should make 20 million miles is 2020. In all likelihood though, probably sometime in late 2019," he said. "I really enjoy flying. I really do."