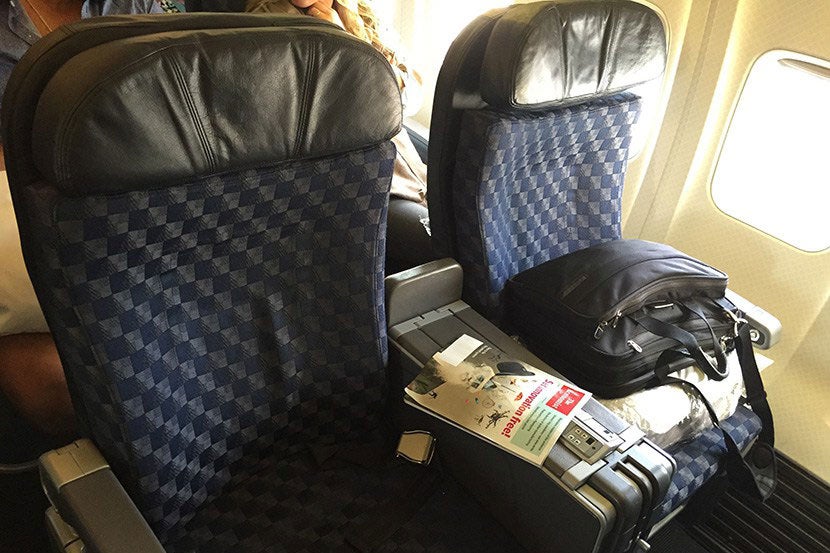 There are a lot of great pictures of decadent business-class cabins and their seats circulating the internet, but reality is rarely kind. Take United's great new Polaris seats, which ended up being limited to relatively few routes, at least for the near future. For every glitzy, reverse-herringbone, semi-enclosed, aisle-access, lie-flat business-class review, there are business-class seats lifting off that don't merit a 30-minute hop, much less an international long-haul. Here's a rundown of the worst that business class has to offer. Don't get stuck in one if you can help it.

You'd think the flagship aircraft of the flag carrier of the nation that brought us the A380 super jumbo jet would have something spectacular in store for its premium customers. Unfortunately, this is not the case. Unlike the airline's excellent business-class seats on American-made Boeing 777-200s and 777-300ERs, the business-class seats on Air France's A380s don't even lie flat, making it one of only two airlines not providing lie-flat business class between New York and Paris. The other is discount all-business-class airline La Compagnie, and Air France often charges more than three times as much as La Compagnie for a flight in essentially the same seat.

Instead: Choose flights on Air France's 777 or A330 to enjoy an usually but deservedly acclaimed business class.

My, how the queen has fallen! The airline that invented lie-flat seats now operates perhaps the worst ones on the planet — though United's eight-across style is a strong contender. These alternating rear- and front-facing seats may foster intimate eye contact, but not much else. Once the partition is up, it must be lowered whenever a window or middle-seat passenger requires service. Reclining these seats, which have a separate foot rest blocking aisle access for window and middle-seat passengers, has even been described as painful. Fortunately, the carrier has plans to upgrade its business-class — aka. Club World — seats starting in 2019.

Instead: British Airways first class can often be had for a reasonable upgrade fee, and while the airline doesn't offer the most extravagant seats, the first-class service has earned TPG's approval.

Israel's flag carrier, El Al, has fallen far, far behind in the business-class race. Fortunately, the airline is poised to catch up, thanks to some new Boeing 787 Dreamliner deliveries — TPG Associate Editor Emily McNutt just reviewed the inaugural flight from Newark (EWR) to Tel Aviv (TLV). Any El Al aircraft other than the 787, however, features business-class seats that look like they came out of the last decade. This angled product is not exactly luxe and will disappoint anyone expecting a lie-flat experience on a long flight to Tel Aviv.

Instead: Try scheduling a flight on one of El Al's new jets — the premium cabins look like they could be worth a shot.

Save those destined for Chile, Uruguay, Paraguay and Brazil, flights from Argentina to most parts of the world are generally long. Unfortunately, Argentina's flag carrier isn't exactly prepared for the ride. While Aerolineas has recently upgraded its long-haul Airbus A330 business-class cabins from its decades-old recliner chairs, the new seats are still reminiscent of the last decade. The chairs themselves are definitely comfortable, with wide space and adequate legroom, but anyone expecting modern business-class amenities like storage compartments and direct access to the aisle will be disappointed.

Instead: Use SkyTeam awards to fly in economy on Aerolineas, or to fly Delta, Air France or KLM to Argentina.

American Airlines is installing premium economy seating in a 2-4-2 configuration on Boeing 777-200s. Meanwhile, United's business-class seating is arranged in a 2-4-2 configuration on some of the the airline's 777-200s. While 2-4-2 is fairly standard for premium economy on the 777, it makes for the tightest business-class seating known to man. Though the seats themselves are actually comparable in pitch and width to more modern business-class seats, there is virtually no private space between them, which makes it incredibly difficult to climb out when they're reclined. Over the next few years, thankfully, these dated ones will be replaced with United's best Polaris seat.

Instead: Look for United's rebranded Continental aircraft, which feature a 2-2-2 configuration in business class — and much more personal space.

For some reason, even as herringbone and high-density configurations have allowed direct access to the aisle for all passengers, some of the supposedly best airlines in the world continue to sandwich their highest paying customers between other humans. Turkish Airlines and Emirates are renowned for service, but their 2-3-2 layouts puzzle frequent flyers used to more creative and accessible seating. While there are many more non-middle seats in this cabin than middle seats, having that middle seat there at all just downgrades the whole experience. Fortunately, LATAM and Saudia appear primed to upgrade their fleets with more customer-friendly business-class arrangements.

Instead: Fly Turkish Airlines' A330 or any of Emirates' other aircraft.

You're flying to Europe, so you thought you'd have international-level seats. Wrong. There are still reports of AA using 757s equipped with domestic first-class seats on transatlantic flights, and unfortunately, passengers stuck in armchairs on these routes don't seem to enjoy much of a discount. To me, this is the worst-case scenario for a business-class mileage vacation. Domestic first-class seats on American Airlines aren't on par with many international premium-economy offerings, much less the lie-flat business-class seats flown by nearly every other airline crossing the Atlantic.

Instead: AA has completed retrofitted its international wide-body fleet, meaning that every other international aircraft the carrier flies features modern lie-flat seating.

Which business-class seats do you dread sitting in the most? Sound off, below.

All photos by TPG staff unless otherwise noted.