Skip to content
Maximize your travel
Change To UK
News

Since my first “First” class flight on British Airways was during the flight attendant strike and in the old first class cabin, I wasn’t too impressed (besides the whole Madonna encounter). I was curious to see how different service would be ex-LHR and with the full crew.

For this trip, I ended up using 110,000 BA points and about $1,000. I generally try to redeem for business class, but since Club World (business class) was not available for my dates, I decided to spring for First. British Airways is one of the few airlines that lets you do “Cash and Points” at a somewhat reasonable rate, which made this trip in First possible, since it normally costs 150,000 BA miles for US-Europe Zone 1.

We arrived at T5 fresh off the Heathrow Express (which is so much better than any mass transit option in NYC) and made our way into the terminal. We had to walk to the opposite end to utilize First Class Boarding, which was nicely appointed and empty.

We dropped our bags, got printed boarding passes and were on our way to security in about 3 minutes. Priority security was almost empty, so we got through in about 2 minutes total. As always, I loved not having to take my shoes off through security and be screamed at by nasty TSA agents.

Once through security we headed for the Concorde Room First Class lounge. We showed out boarding passes at two separate entrance points and were welcomed to the grandeur of the lounge. It was very well appointed, with an elaborate bar, private dining area, spa, shower cabanas and a terrace with wonderful views of the runways.

Before we made our beeline for the bar, I stopped by the Elemis Spa and made an appointment for a massage chair facial for 2:20pm- perfect way to prep for a 3:30pm transatlantic flight. Once the appointment was made, we made it back to the bar where we were promptly served champagne (asked whether normal or rose- nice touch).

After a relaxing glass of champagne, we decided to do a small lunch in the private dining area. I got a minestrone soup and a chicken Caesar salad. The soup was fine, however the salad had a very weird, almost sweet Caesar dressing. Afraid of food poisoning potentially ruining my 7 hours of first class bliss, I refrained from eating anything else until we boarded. In general I was very impressed with the private dining area- very well kept and the service was attentive.

After dining, I went for my spa treatment, which was nice (though I was too tall for the massage chair to really have an effect on me). The facial was very gentle, but it was still nice to relax, especially after a glass of champagne.  After the 15 minute treatment, we headed back to the main lounge area, where we were informed that our flight was going to be delayed an hour. No big deal- I actually wanted a litt

le more time in the lounge! I sat out in the terrace area and did some plane watching and had an excellent glass of meritage.  I personally love watching 747s, so I was in aerophile heaven.

Before I knew it, it was time to board and the screen showed A10. I headed down to the gate and soon realized this was a remote gate with buses lining up to take us to our plane. I had a quick flashback of flying Delta/Comair out of JFK and getting packed on a hot, crowded bus. Also, there was no priority boarding, though luckily they were able to process everyone pretty efficiently.

At this point I had no idea that our plane had a mechanical issue and I was a bit puzzled why boarding was so sloppy. We hopped on a bus and were then driven a solid 5 minutes away to a maintenance hangar. We then boarded via stairs to our lovely 777.

I have to admit- I was a little bit annoyed at the entire boarding process, but all of my fears went away as soon as I boarded the plane and turned left to get to my seat (3A). The cabin was impeccable. The seats were much different than what I was expecting. IT WAS THE NEW FIRST CLASS! The head flight attendant immediately greeted me and welcomed me on board. I chatted with him about the new product and he admitt

ed that he had only been in the cabin once or twice, but that everyone loved it. And I can see why- it is very classy. Everything about it is refined and not overdone.

There is mood lighting, but very subtle and just adds another layer of comfort to the cabin. The TV screens are large and they swivel

into a casing so they don’t interfere when not being used.

The windows are encased in a clear (Plexiglass?) box, which is not very noticeable seeing I nearly hit my head on it when trying to look out the window.

Champagne and sleeper suit were immediately brought over. From this point on, the in-cabin service was terrific. My glass was never empty and the captain quickly addressed the plane, letting us know the reason for our original delay was a serious mechanical issue on our old plane, so they had to

get us a new plane (which was fine with me!).  It now made sense why we were at a hangar! Before long we were taxiing and on our way to Newark.

Once airborne, I went for the Kir Royale, a signature British Airways cocktail made of champagne and Cassis liquer, which was refreshing.

Hot towels and warm nuts were also provided. I absolutely have to reiterate that the in-cabin service was phenomenal. Our flight crew seemed proud of the product and were eager to please.

After my cocktail, I realized I had worked up quite an appetite since the small meal in the lounge, so I decided to review the menu (detailed pictures of the food and wine menus listed at the bottom of this post).

To start, the amuse bouche was “cheese sticks” and avocado salsa, which I thought was an interesting choice. It was tasty, but not the most refined food I’ve had. But then again, I’m at 35,000 feet enjoying an amouse bouche- I can’t really complain.

For first course, I enjoyed the fresh summer salad with parsley cream dressing.  I was also in the mood for a nice glass of red wine, so I ordered a glass of 2002 Chateau Giscours Margaux, which I thoroughly enjoyed.

For my main course, I went with the “assiette of salmon and monkfish with crushed Jersey royal potatoes and gilt-head bream with mini ratatouille served with lime chili dressing on a pesto crust.” While I never expect to be “wowed” by cuisine in the air, no matter what airline or class of service I’m flying, I would have to say I was impressed by the meal . As always with airline food, I found it a bit salty, but overall quite flavorful and an appropriate portion.

For dessert, I went with the grapes and cheese (Camembert and Gubbeen).

After my meal, I decided to watch some movies on the large personal TV. I

found the selection of new and old movies to be plentiful and before I knew it 2 hours and a couple more glasses of Margaux flew by. At this point, I was a little bit jealous of my seatmate who had converted his seat into a bed, so I decided to do the same, even though I try not to sleep on westbound flights from Europe, I needed to a power nap. I went to the bathroom to throw on my BA First sleeper suit (when in Rome!) and asked the friendly flight attendant to make my bed. By the time I returned, the bed was in place and I promptly fell into a wonderful sleep. 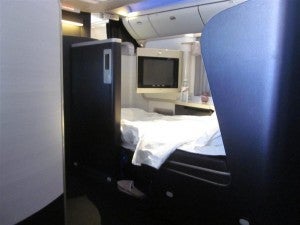 Two hours of blissful sleep flew by and I woke up to a beautiful view outside my windows and decided it was the perfect time for some afternoon tea.

The flight attendants were constantly walking through the cabin, so flagging someone down to order tea was a breeze. I decided on earl gray and scones and it was brought out within 5 minutes.

the flight- my personal time to relax while looking out the window at a gorgeous day over the Atlantic ocean. The tea and scones were much better than the afternoon tea I had gotten a day earlier at the Atrium restaurant at the British Museum.

After tea, I decided to poke around the seat a little bit more and I stumbled into the closet, which was small, but enough for a suit jacket and coat.

Before I knew it, the dreaded announcement was made that we were beginning our initial descent into Newark. I have flown on many first and business class flights and this is the first one where I really could have spent a couple more hours.

Wanting to get the most out of the experience, I decided to take more pictures for this report. I was especially intrigued by the window shades, which are automatic and mood-lit.

Before I knew it, we were hovering over I95 in New Jersey and landing at EWR. Taxi to the gate was a bit slow, due to getting towed in, but it was still more efficient than JFK.

Upon leaving, incredibly refreshed and relaxed I might add, I snapped a couple more pictures.     Also included are some other photos from the trip that might be interesting to those who are dying to try out the new First.

Overall, I was blown away. BA’s motto is “Every detail matters” and I can see why they chose that. Service, food and hard product all exceeded my expectations. In fact, my expectations have increased so much, I am worried about my next flight in business class on Air France! What has the world come to when I am nervous to fly business class because I was spoiled so much by first!?

In any case, I highly recommend the new First Class product- please feel free to comment if you have any questions.

Sign up for our daily newsletter
The Points Guy Brian Kelly is the CEO of The Points Guy. Need I say more?
You might like
South Africa fare sale: Cape Town, Johannesburg from $578 round trip
Deals
10m ago
Reader credit card question: Should I keep a travel credit card when I already fly for free?
News
26m ago
FAA drops ban on flights over the Persian Gulf
News
2h ago