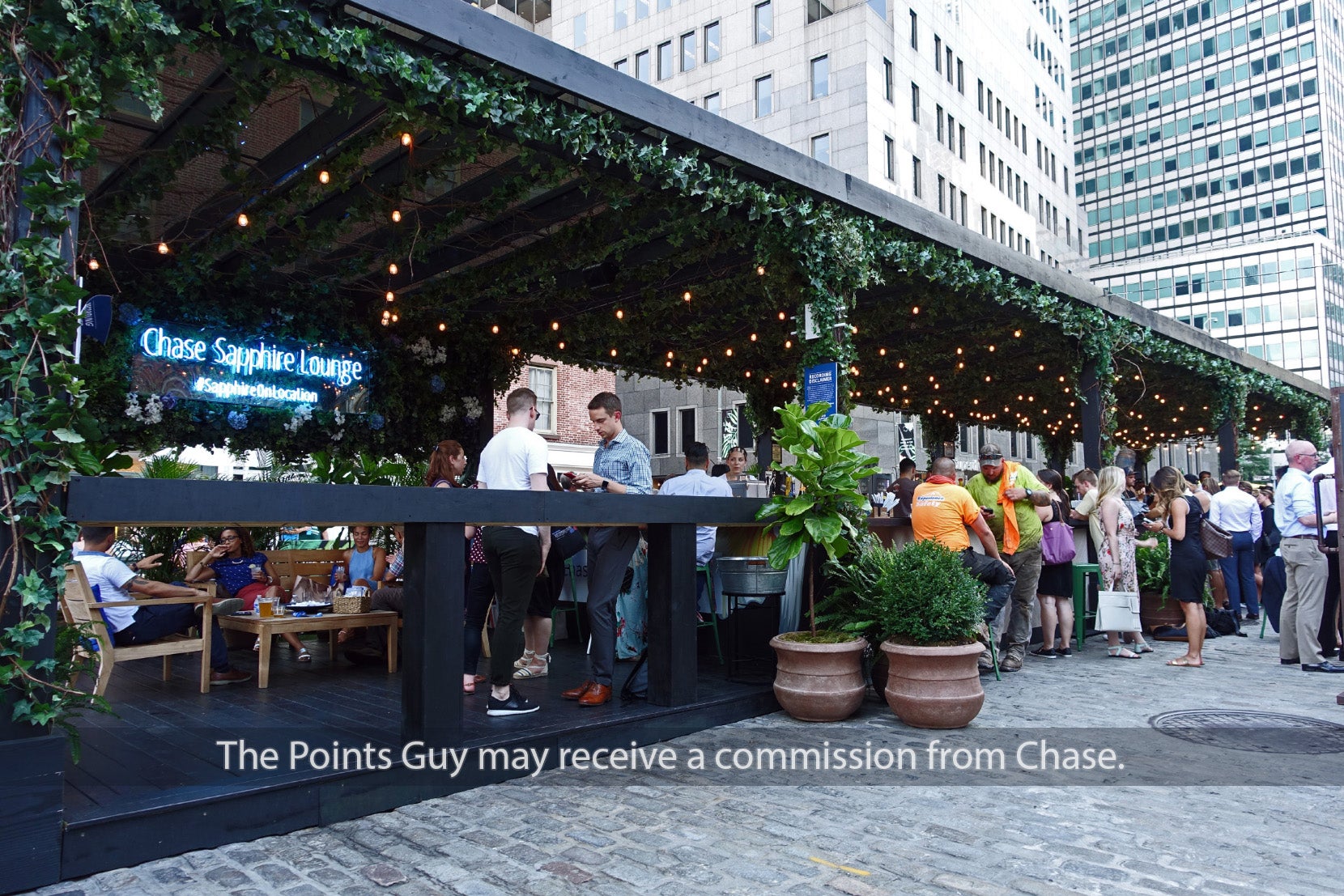 From time to time, loyalty programs and credit card issuers sponsor major events around the world — and, more often than not, members are invited to attend, either for free or a (typically) reasonable fee. For example, last year I had a blast at Vegas Uncork'd and I almost scored free PGA Tour tickets from United. TPG's had a blast at the Cayman Cookout, a Ritz-Carlton production, and I've been dying to go myself. But my most recent stop was an event much closer to home — just a few blocks, to be exact.

This summer, Chase is sponsoring a couple venues at the South Street Seaport in Lower Manhattan — a Chase Sapphire Lounge (with for-purchase food and drinks), and improved access to the in-demand Seaport Food Lab pop-up restaurant.

There you'll find "grass" (the best you can hope for in Lower Manhattan), covered picnic tables and some games.

There's also a (modest) exclusive food and beverage menu, seen below, and you can order from a much larger venue-wide menu as well.

Cardholders also get access during some of the free concerts at the Seaport, which means you'll have a (potentially) less crowded place to hang and more attentive service (but you'll still pay for food and drinks).

For example, upcoming scheduled events include:

Meanwhile, just around the corner...

Sapphire cardholders get improved access to the Seaport Food Lab, where the visiting chefs below will present multi-course meals through mid-October:

Tickets are typically available a couple weeks in advance, and most dinners cost $100 (or 10,000 Ultimate Rewards points) per person. You can sign up with Resy (link here) or, if the times you want aren't available there, via Chase by logging in to your account here.

I had a chance to join a media dinner with Hugh Acheson, a Georgia-based restauranteur and Top Chef judge. He presented a healthier take on Southern cuisine — the food was fantastic and fresh.

Shortly after arriving, we were presented with one of my favorite dishes of all — sushi-grade tuna with beans and okra. We had five courses (some with multiple dishes each), but this one wasn't even on the menu. Bonus tuna!

Another highlight was the Southern Fish Stew, consisting of shrimp, clams and catfish.

Dessert was something called a "Buttermilk Chess Pie" — it was superb.

If you have a Chase Sapphire Preferred or Chase Sapphire Reserve card, it's definitely worth stopping by the Seaport at some point this summer. I highly recommend spending the 100 bucks for a ticket to the Food Lab (I'll be returning soon!), but the Sapphire Lounge could be worth a stop as well — especially if your visit coincides with a free concert or event.

Chase is also offering access to paid concerts — the next one posted is for August 3, and includes performances by snny, Baio and Robert Delong. Tickets (available here) cost $40 and include food and beverages, plus access to the private viewing area. There are also opportunities to join an "eat and greet" with various artists. Check out the roster and purchase tickets here (note that you'll need to sign into your Chase account to get access). Also keep an eye out for other events around the US, including the Outside Lands Festival in San Francisco, where you can purchase otherwise-sold-out 3-day passes, and PGA Championship packages — or if you're already headed to to the PGA, you can get access to the onsite Chase Sapphire Lounge just by flashing your card.

Have you flashed your Sapphire card at the Seaport this summer?