Where to Sit When Flying Korean Air's 787-9: Economy 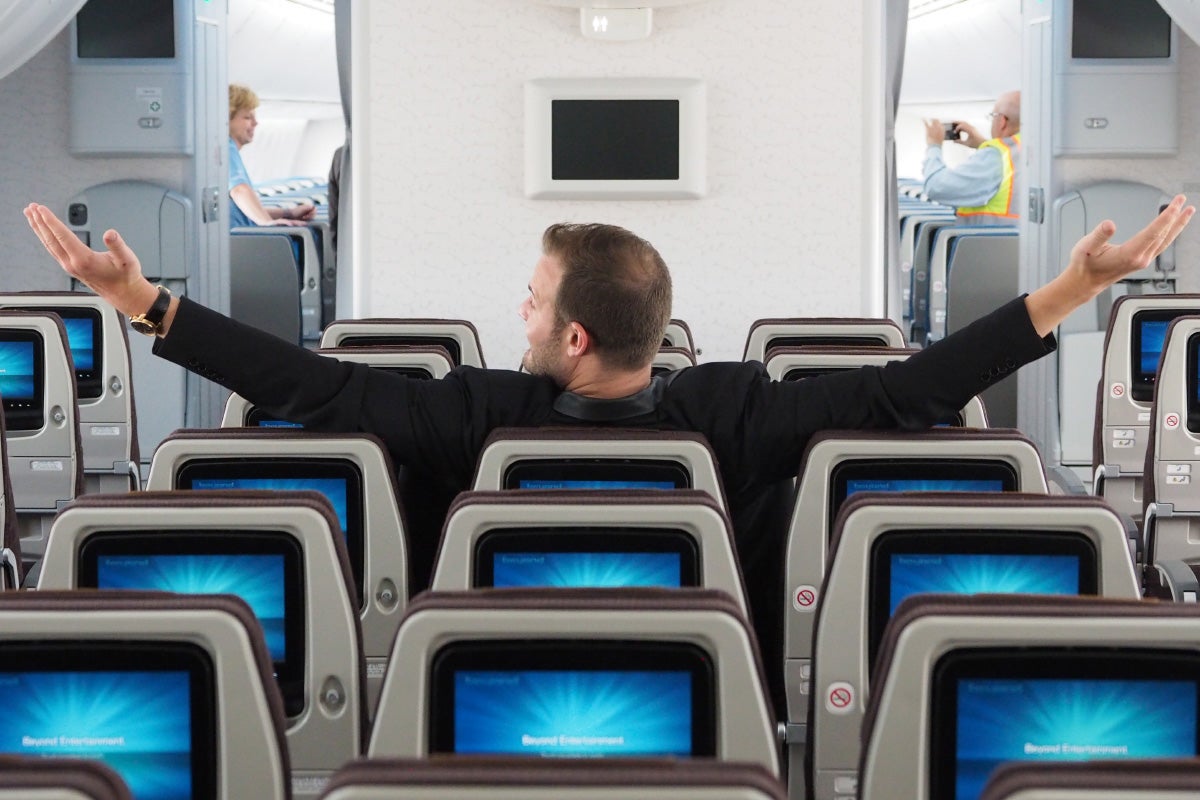 There's no question that walking into a brand-new cabin with a "new plane smell," factory-fresh seats and, well, not a single passenger in sight, could taint your perspective a bit. But Korean Air's 787-9 Dreamliner wasn't just putting on a show during our visit to Boeing's new South Carolina facility last month. This plane's configuration really is a step above the rest, especially back in coach — well, with one exceptional exception.

In this third installment of "Where to Sit When Flying Korean Air's 787-9," I'm going to dig into the two economy cabins, consisting of a total of 245 seats divided by two cabins. If you're interested in flying up front, check out our posts exploring the first class and business class cabins on Korean Air's first extended-length Dreamliner.

A very generous pitch for standard seats (up to 34 inches) makes Korean Air’s 787-9 economy cabin one of the most comfortable in the industry and a great choice for long-haul travel. By comparison, United offers 32 inches of pitch for standard seats on this plane, while AA's 787-9 has between 30 and 31 inches. You can get 34 inches (AA) or 35 inches (United), but you'll have to pay extra for these premium seats — at least $100 each way on some routes.

Here's a seat map to help you visualize the cabin arrangement. (Note that two of the seats that appear on the map don't actually exist — there are no seats at 44C or 44G.)

Seats are divided almost evenly between two cabins. According to the airline, each seat is 17.2 inches wide, which is a hair wider than what you'll find on some other 787s, but a far cry from the 18.9 inches you'll get on Japan Airlines, which offers seats in an incredibly generous 2-4-2 configuration (but with an inch less of pitch).

Each seat comes with a 10.6-inch touchscreen in-flight entertainment system, a coat hanger and a sizeable fold-out tray table.

There are also two universal power ports for every three seats, and every passenger gets a USB port.

The 787's new Android-based in-flight entertainment system is entirely self-contained within the seat, whereas older models have an "entertainment box" in each row. This particular design makes it possible to take full advantage of the space under the seat in front to store items and stretch out.

As with the first class and business class cabins, some economy seats are preferable to others. In the image below, TPG's sitting in my favorite seat, 45G, which is a mirrored version of 45C. Both of these spots are missing a seat in front, so you have tons of room to stretch out.

The one downside to 45C and G (and 44B/H in front) is that the seats face the center economy galley, so expect a lot of commotion before, during and after the meal service. They're also near four lavatories, so there will be a fair amount of passenger traffic, too.

If you're looking to stretch out without the traffic and noise, 29ABC (pictured below) and 29GHJ (on the starboard side) offer significant legroom, too, though seat width is reduced slightly due to the slide-out entertainment screens and tray tables.

Similarly, 28DEF offer more more legroom thanks to the bulkhead, and 28D and E are a bit wider than 28F due to the placement of the tray tables and fold-out displays.

46DEF at the front of the rear economy cabin offers a similar amount of room to stretch out. The seats are nearly identical to those above, though all seats in the rear cabin have brown fabric, while it's blue up front.

Regardless of which seat you choose, you'll have 34 inches of pitch (read this primer if you're not familiar with this particular measurement). With that much room, even TPG (at 6'7") had room to sit comfortably in an ordinary center section seat.

The last seats you'll want to pick are those located in the middle of each row — designated B, E or H. If you don't have any other choice, be sure to grab a center seat in the bulkhead, but you'll almost certainly be happier in an aisle (C, D, F or G) or window (A or J) seat.

Of course, you could luck out with a middle section to yourself, but it's up to you whether or not you're willing to risk flying 14 hours sandwiched between two strangers.

I'd also recommend avoiding seats right next to the lavatory. While you hopefully won't have to deal with any nasty aromas, there will certainly be plenty of noise — on a long-haul flight, you can expect the doors to open and close many dozens of times. Seats 43C and 43G are inches away from the lavatories below, and 42C, D, F and G are a bit too close for comfort, too.

(Note: Those aren't side-by-side toilets in the image below — the center partition can be removed in two of the lavs between the economy cabins, so that the airline can offer a handicapped-accessible lavatory with a smaller footprint.)

Finally, the there are two pair of seats at the far back of the rear cabin — 56B and C, and 56G and H. While these seats will certainly be tempting to couples, note that recline is a bit limited (with the bulkhead just behind), and you'll be right next to the galley and lavatories. You'll also want to avoid any of the seats in row 57 for the same reason.

Award availability tends to be excellent on most routes, with two or more seats open in all cabins on many dates. Fortunately, Korean Air is an instant transfer partner of Chase Ultimate Rewards, so you can transfer points earned with cards like the Chase Sapphire Preferred and book these seats instantly.

Obviously, you'll be best off flying in first or business class, but if you prefer to save money (or miles) and travel in coach, Korean Air's 787-9 is definitely worth considering. It's great to see the airline continue its trend of offering roomy economy cabins, and when you factor in the Dreamliner amenities (higher humidity, lower altitude pressurization and large, electronic dimming windows), this particular aircraft is sure to offer a pleasant ride.

Have you flown economy on Korean Air?