Where to Sit When Flying Korean Air's 787-9: First Class 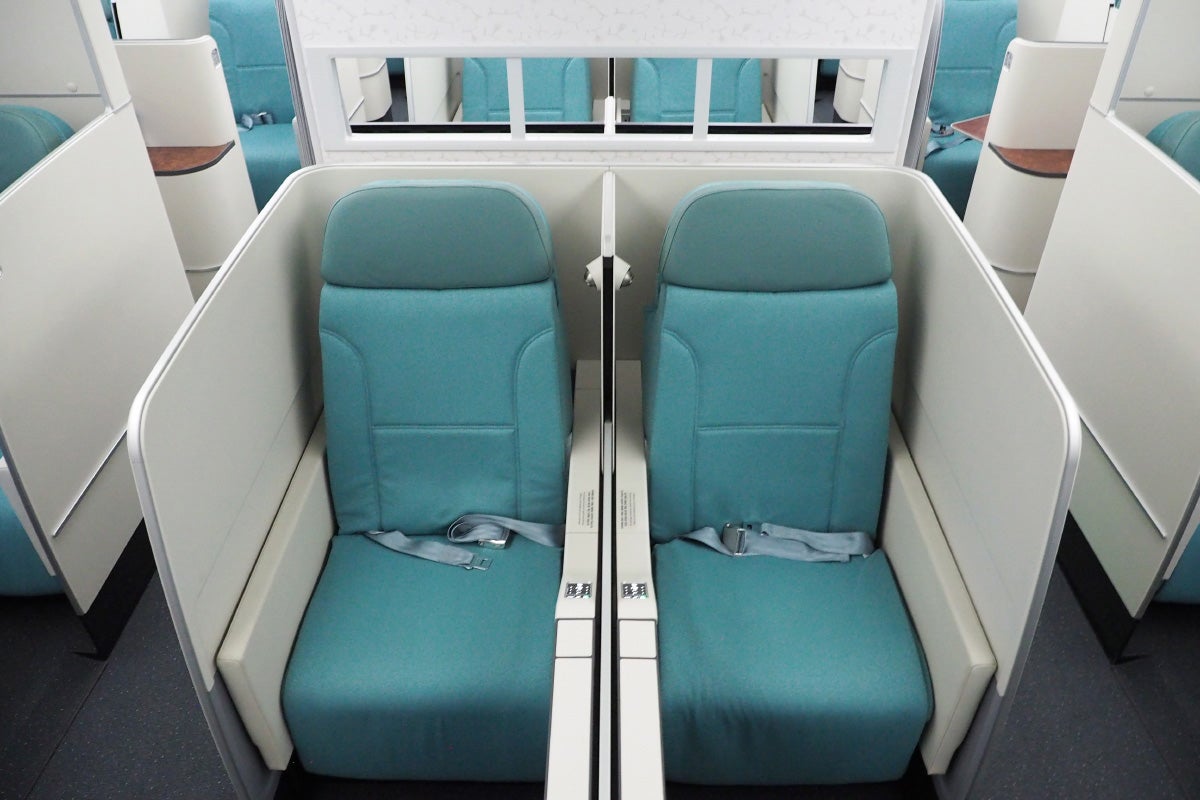 Last week, we published a tour of Korean Air's brand new 787-9 Dreamliner, which will soon begin service within South Korea, followed by flights to Japan, Toronto and eventually destinations here in the US. Given that several of the airline's upcoming 787 routes will have you confined to your cabin for the better part of a day, it's important to choose wisely when it comes time to select a seat — regardless of which one you're flying in.

I'll start off this series with first class, which has some... peculiarities... on this particular aircraft. So, before you continue with this post, here's some required reading: Korean Air’s 787-9 Dreamliner Has the Same Seat in Business and First Class.

Now that you understand that the first- and business-class seats are more or less identical, and you've decided that you're still interested in booking first class (or you're just curious about what's on offer), let's take a closer look.

Both the first-class and business-class cabins are pictured in Korean Air's seat map below. As you can see, both have seats arranged in a 2-2-2 configuration, but the airline's only added seat dividers to the first-class section of the map, even though the biz cabin has them, too. Sneaky!

Officially, seats are 21 inches wide with 75 inches of pitch, though we did find two first-class seats to be a hair longer than any of those back in biz — more on that a bit later.

With just six seats in the first-class cabin, your options are quite limited. However, if you're traveling solo, there are only two seats I'd recommend. The first is 1A, which is located just behind Door 1, right up next to the window (this seat actually has three of its own large, electronic dimming windows).

Then, on the other side of the cabin, 1J is an equally solid pick since it has the same arrangement, just in reverse. With the privacy screen raised, 1A and 1J are the most private seats on the plane.

TPG is 6'7" (or 79 inches tall), and had almost enough space to stretch out comfortably in seat 1J, even though Korean Air lists these seats as having 75 inches of pitch. The window seats in the business-class cabin appeared to be one inch shorter than those in first class, but if you're just a hair too tall, an inch can make all the difference.

The only other advantage of picking a seat in first class (besides the improved service and catering) is the larger display — 23 inches instead of 17 in biz.

Unless you anticipate getting up many times during the flight (or you feel claustrophobic in a window seat), I'd avoid the aisle-facing seats — 1B and 1H — since there's much less privacy there.

Similarly, unless you're traveling with a companion, the center seats (1D and 1E) should be avoided as well.

Now, speaking in broader terms, if you're keen on booking first class, you might want to avoid this aircraft altogether. With a width of just 21 inches, these are definitely some of the narrowest seats you’ll find in international first class. By comparison, Korean Air's first-class seats on the A380 are 26.5 inches wide, and even the business-class seats are wider on the A380, at 21.6 inches. If you'd like to fly the Dreamliner, I'd recommend saving your money or miles and booking business class, instead.

Award availability tends to be excellent on most routes, with two or more seats open in all cabins on many dates. Fortunately, Korean Air is an instant transfer partner of Chase Ultimate Rewards, so you can transfer points earned with cards like the Chase Sapphire Preferred Card and book these seats instantly.

Korean Air offers one of the more competitive international first-class products, but there's no question that first class really feels more like business on the Dreamliner — I mean, both cabins literally employ the same seat. Really, the only time I'd consider shelling out for first class over business on this plane is when there isn't any award availability in biz. Even then, though, you might want to consider an alternative routing or adjust your schedule by a day or two instead.