Where to Sit When Flying Korean Air's 787-9: Business Class 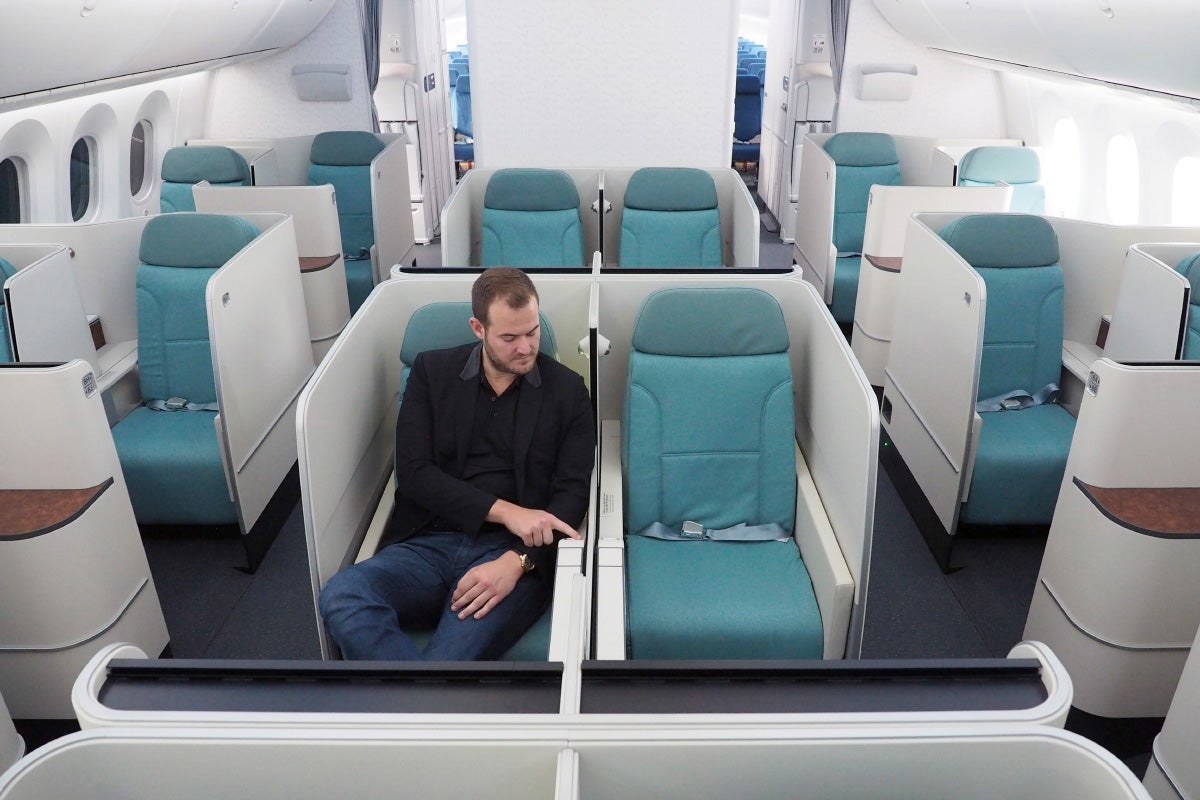 Korean Air is the latest international carrier to begin operating flights with the 787-9 Dreamliner, and while the airline's decision to add the same seats to both of its premium cabins isn't ideal for first-class travelers, it's great news for those flying in business class. The reason? If the APEX seats Korean Air's selected are good enough for long-haul first class, they're certainly sufficient for biz.

Before you continue with this post, I recommend taking a moment to catch up on this aircraft's peculiar seat configuration by reading this post first: Korean Air’s 787-9 Dreamliner Has the Same Seat in Business and First Class.

So, while the APEX seat is far from the airline's most luxurious first-class offering, it's definitely among the best options for biz, as I experienced on a JAL 777-300ER flight back in 2015.

Like those in first class, business-class seats are arranged in a 2-2-2 configuration — however all seats have direct aisle access due to the unique design.

These seats offer excellent privacy for a business-class cabin (though not quite enough for first class). So regardless of where you end up, you should have a pretty comfortable ride.

Just as in the first-class cabin, my first pick would be the window seats — but, well, not all of them. 7A, 7J, 9A and 9J are the best seats in the cabin, in my opinion, since they offer the most privacy and have three windows each (TPG's pointing to seat 9J below).

The displays are a bit smaller than those up front (17 inches vs. 23), but that alone isn't a good enough reason to book first class over biz.

Notice the (fairly) narrow access aisle — it's a bit tighter in business than first, so keep this in mind if you typically have trouble getting in and out of your seat.

Again, just as in first class, I'd avoid the aisle-facing seats on each side of the plane — 7B, 7H, 8B, 8H, 9B and 9H — since these are much more exposed than the ones up against the window. They're definitely easier to get into and out of, though.

Additionally, all D and E seats are located in the center, and they're a bit close together. You might want to avoid these unless you're flying with a companion (though you can raise a partition to close off the space between seats).

Finally, there are two window-facing seats that have two windows instead of three. While this probably isn't a deal breaker, you might as well grab one of the seats with three windows, right? In this case, you'll want to avoid 8A and 8J.

Award availability tends to be excellent on most routes, with two or more seats open in all cabins on many dates. Fortunately, Korean Air is an instant transfer partner of Chase Ultimate Rewards, so you can transfer points earned with cards like the Chase Sapphire Preferred and book these seats instantly.

While I'd hesitate to book first class on this plane, given that Korean Air's 787 offers the tightest first-class configuration of any 787-9 operator, the APEX seat is fantastic for business class, offering a very comfortable (and semi-private) ride across the Pacific. Additionally, Korean Air's award availability tends to be fantastic, and with points so easy to earn (via cards like the Chase Sapphire Preferred), this is a product you'll very likely be able to fly.

Have you flown in the APEX business-class seat?