In the spring of 2015, before Club Carlson increased the eliminated the last award night free benefit for co-branded credit cardholders and increased the price of top tier properties from 50,000 to 70,000 points per night, I crossed my fingers that the dates would work and booked a couple of nights for summer of 2016 at the Radisson Blu Edinburgh. I was able to book two nights for 50,000 total Club Carlson points when that would now cost 70,000 Club Carlson points per night.

I made a few speculative Club Carlson reservations before the big devaluation, and they didn’t all work out, but this one did. When August 2016 rolled around and the four of us + Grandma enjoyed a few days in London and then took the train four hours north to from London to Edinburgh for our first trip to Scotland. I really picked the dates mostly at random for our Edinburgh visit, but it turned out that we were there during the time of year of the Fringe Festival with tons of shows, plays, and performances happening all around us on the Royal Mile. We were also just a 10 minute walk from the Edinburgh Castle where the must-see annual Edinburgh Military Tattoo was happening. 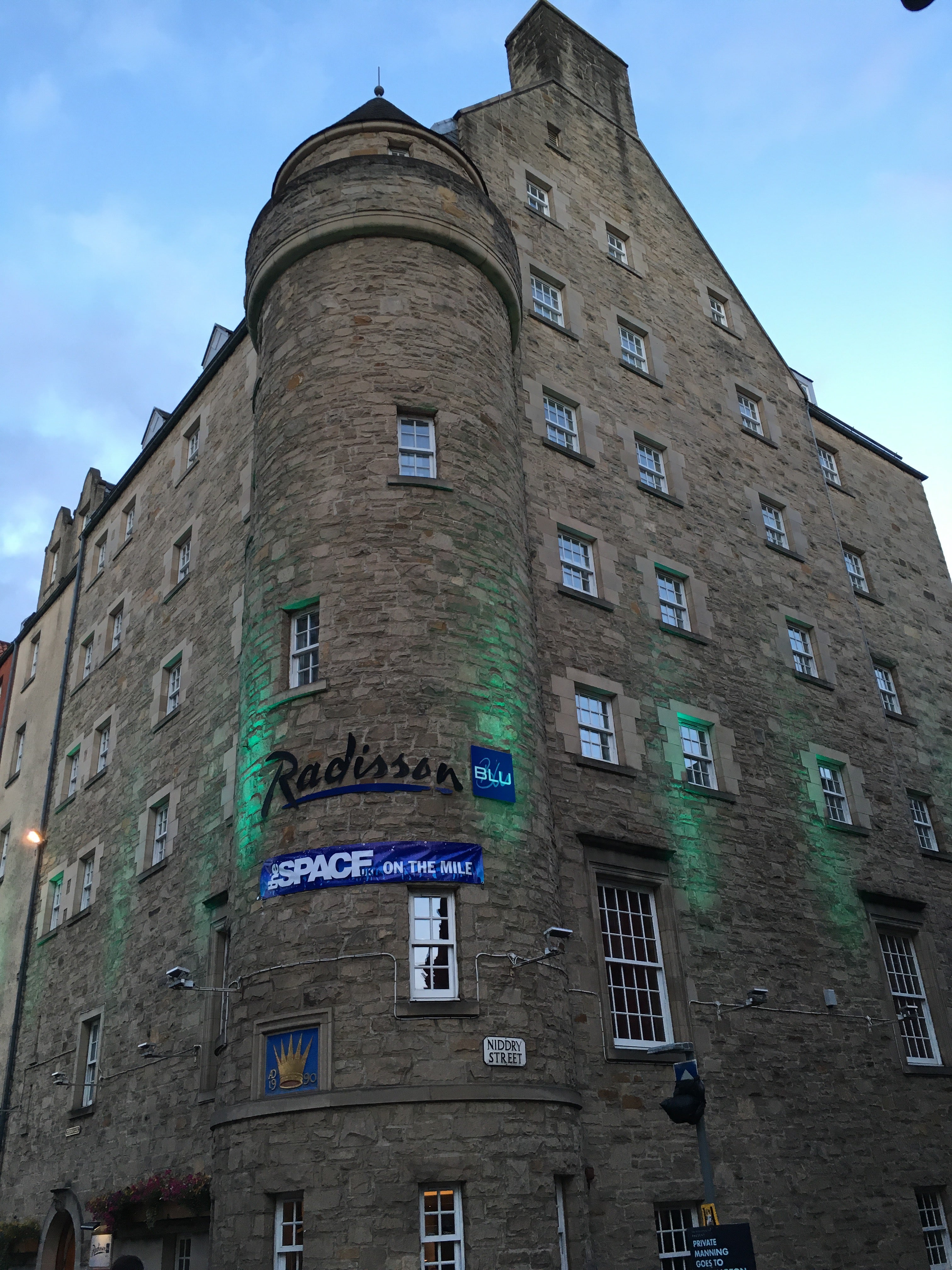 In other words, the Radisson Blu Edinburgh Royal Mile is an insanely well located hotel if you want to be in the middle of the Edinburgh action. The hotel has 238 rooms and suites, an onsite spa, two onsite restaurants, an indoor pool, and more. If you associate Club Carlson hotels with kinda run down spots in the US, you haven’t been to several of their very solid properties in Europe.

As I often do when traveling as a family, I emailed the hotel directly to see if we could pay a cash co-pay to go from a standard room to a suite. Fortunately they were very accommodating with this request and for an additional £95 per night we secured a classic suite with a true living room and bedroom at around 60 meters. This was 100% worth it for us traveling with the baby who we were able to put in the living room in her crib at night. 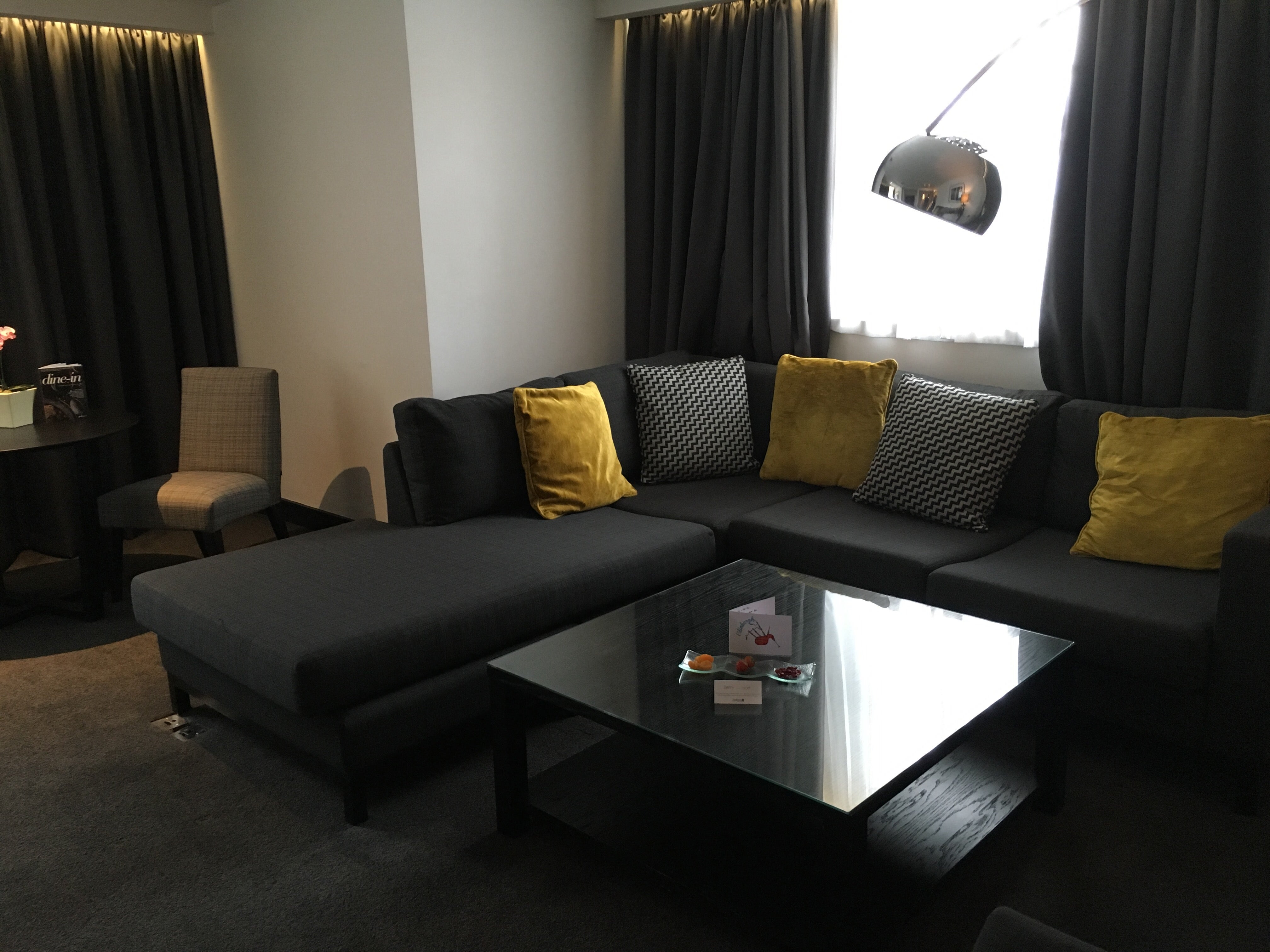 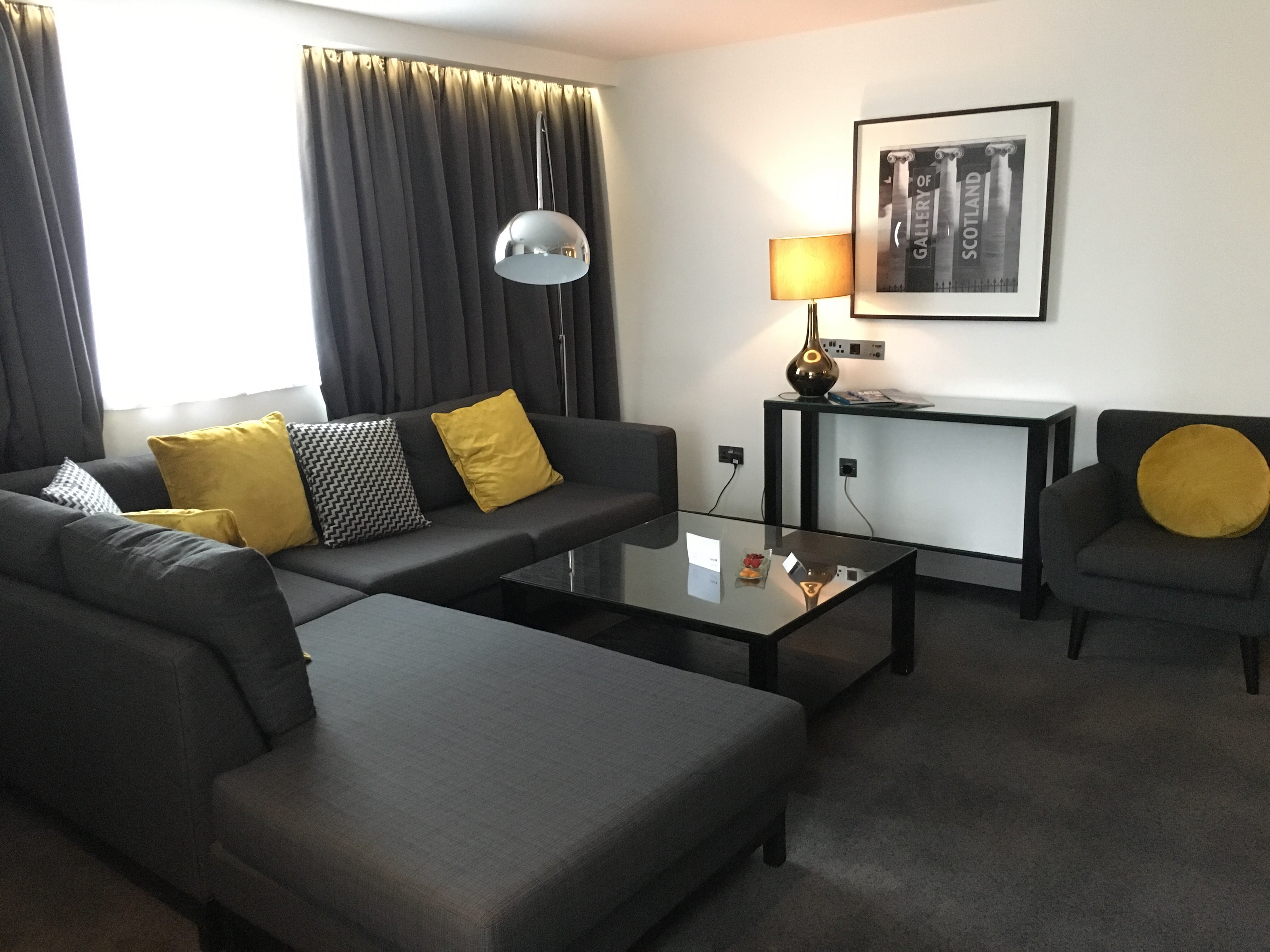 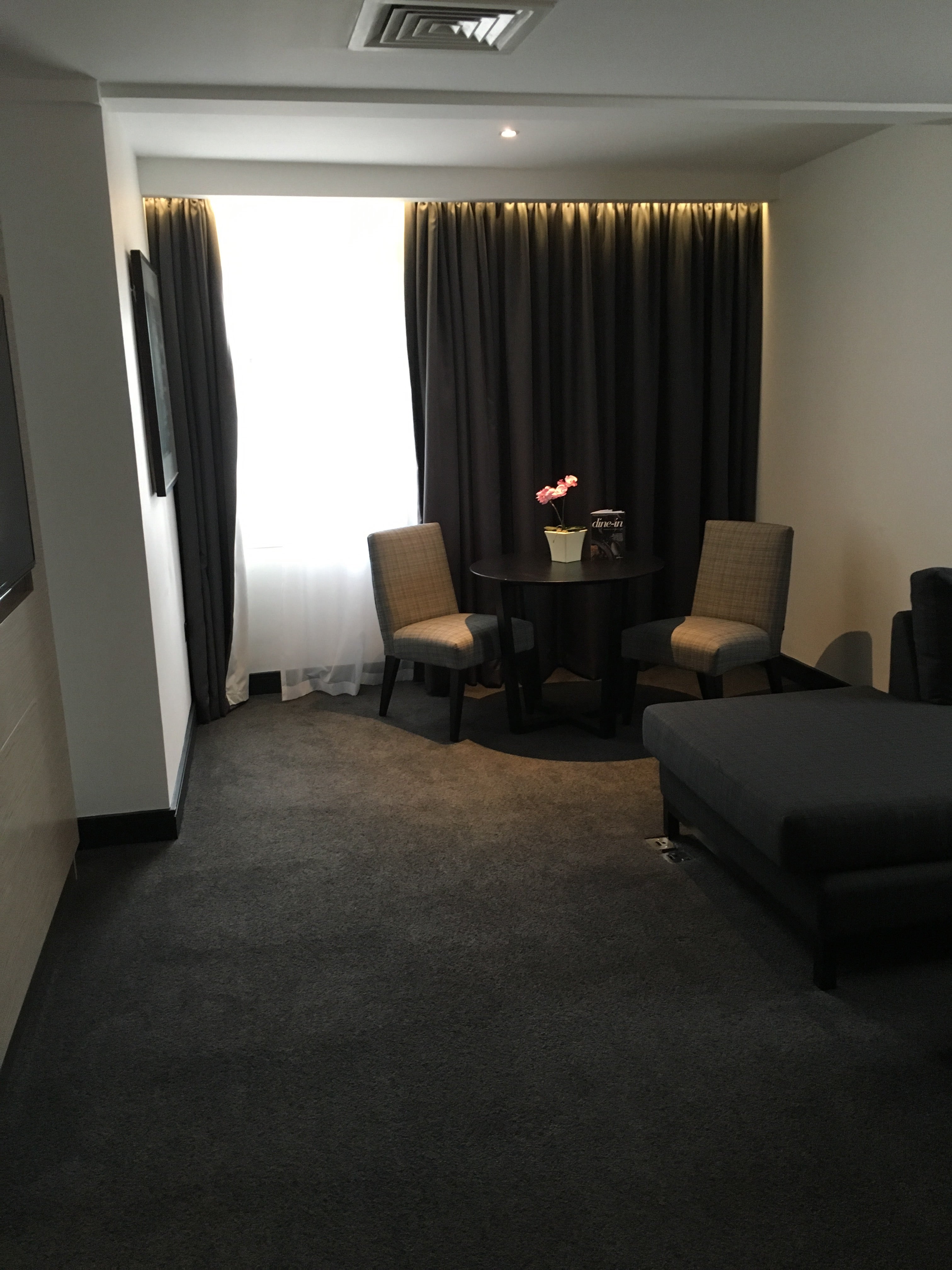 Speaking of the crib, I was thrilled that it was an actual crib and not a pack and play. It also had a mobile on it – a first for me in my hotel crib adventures. Many babies sleep much better in actual cribs than pack and plays, and my little one is no exception!

The bedroom itself was a “king bed” comprised of two twin beds put together, which is pretty common in Europe, though not my favorite arrangement. Otherwise, it was great and they have a flyer offering all sorts of different blankets and pillows if you desire. 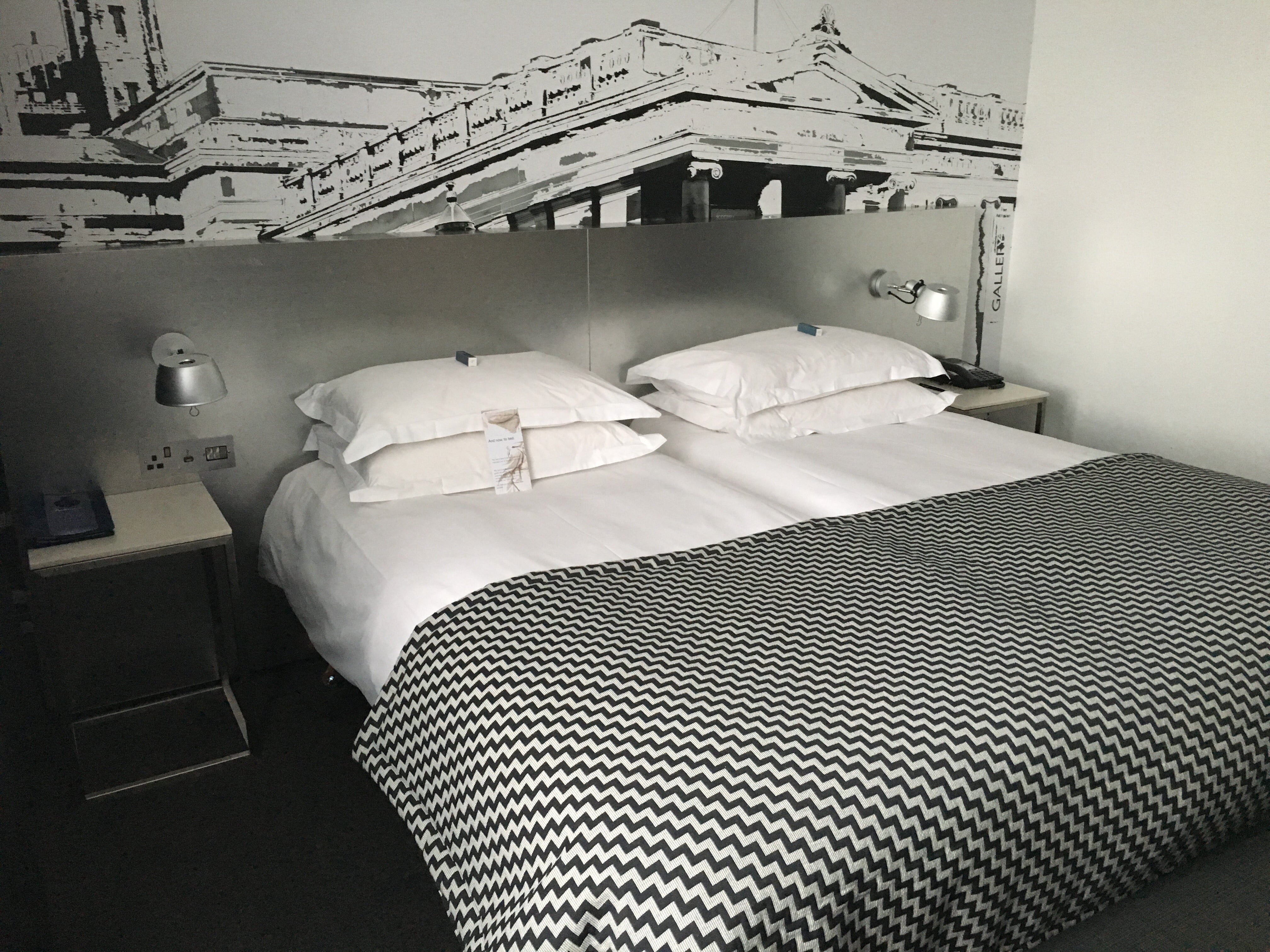 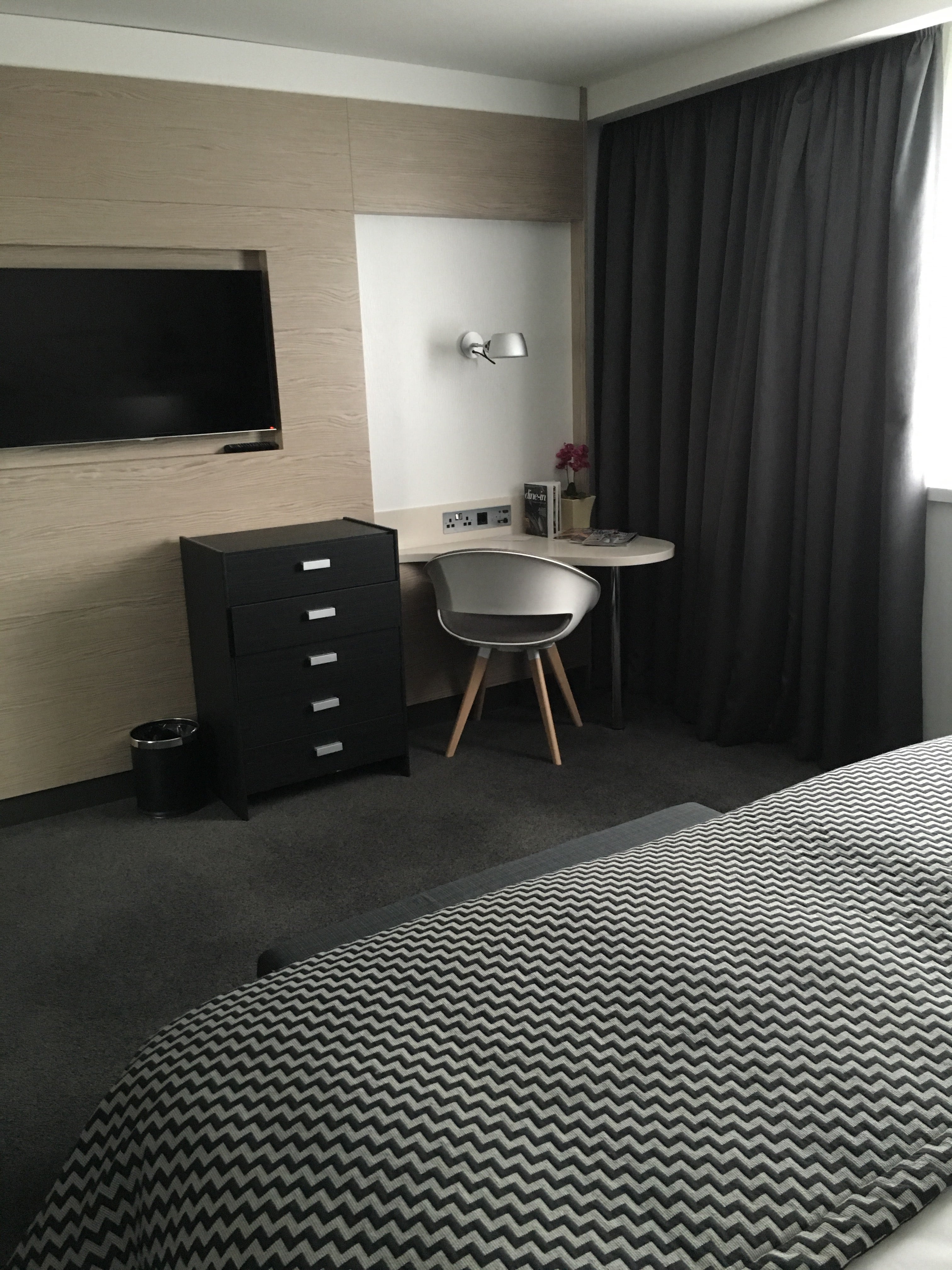 As we were there during a serious festival time, it was a bit loud some nights on the street. You also hear the nightly fireworks from the Tattoo performance around 10:30PM at night. It didn’t bother me, but plan accordingly if street noise disrupts you. We used a white noise app on the iPad near the baby’s crib to help her drown out the noise. 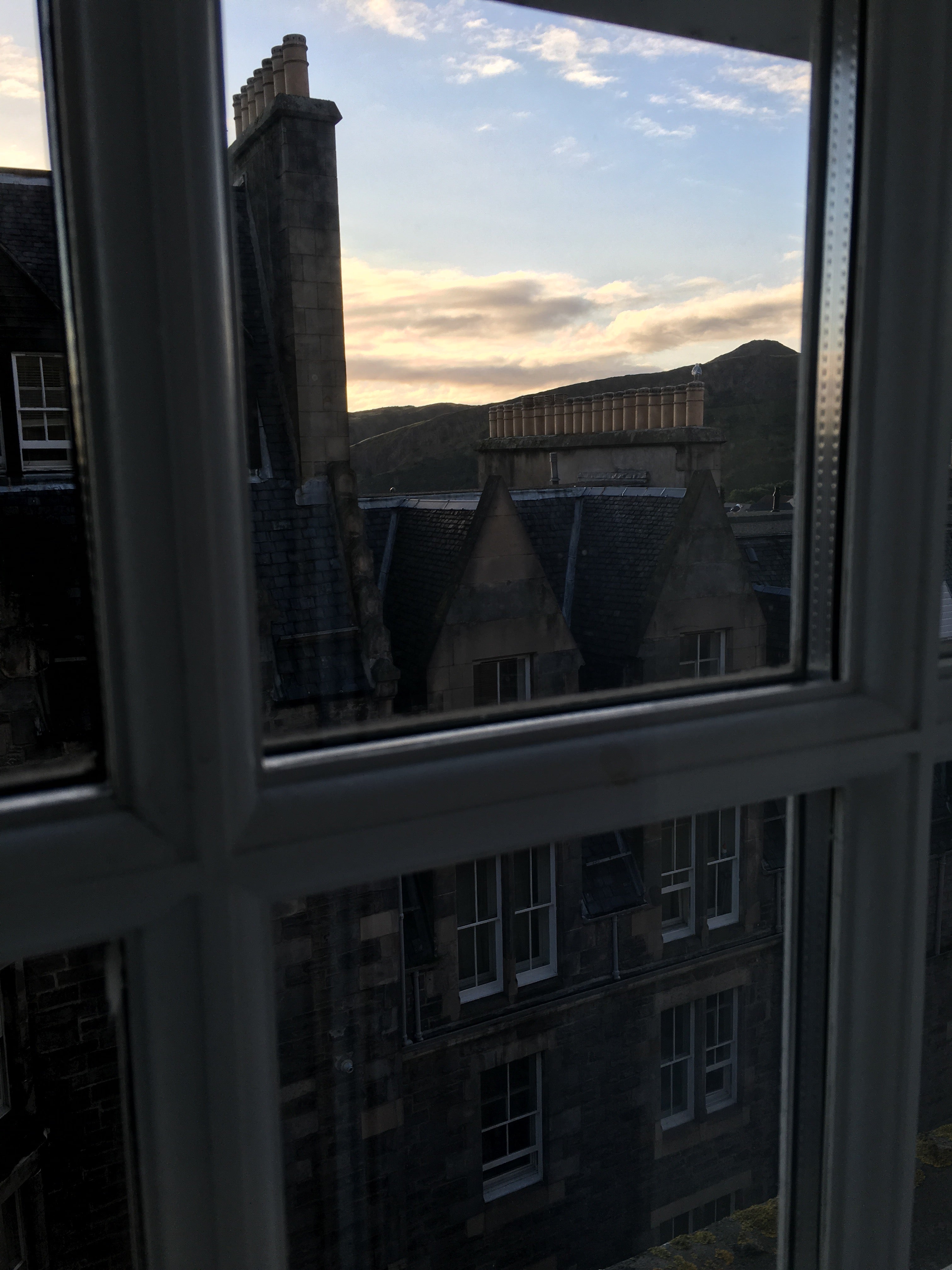 My mom stayed a night at this hotel in a standard room just down the hall from us, it and too was stylish and comfortable as shown below. 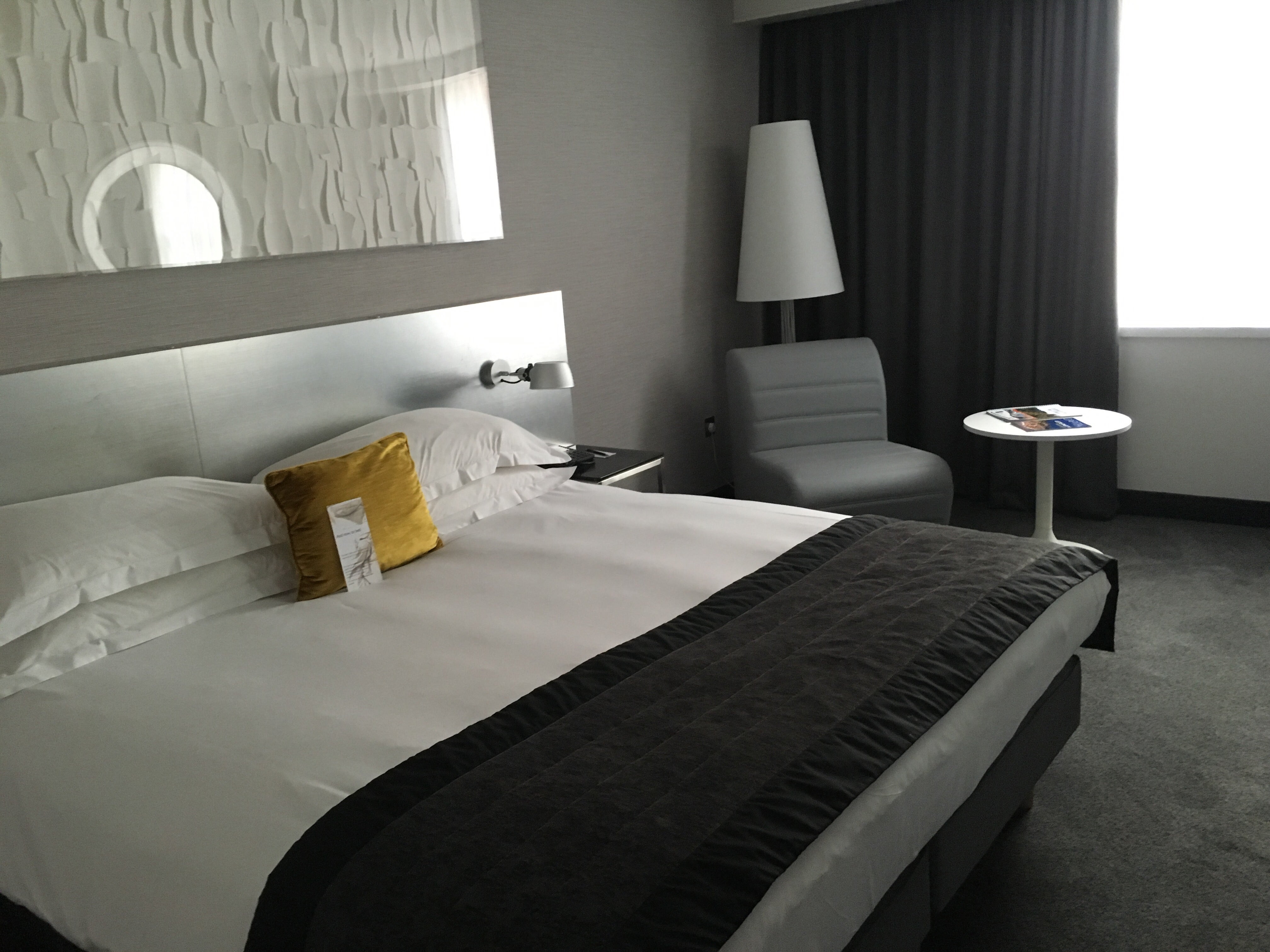 The classic suite we had really was perfect for us and very comfortable to be in both at night for sleeping and for hanging out some during the day…which is absolutely going to happen when you have a napping baby along for the journey.

The staff at the Radisson Blu Edinburgh was also extremely professional and helpful even though they were very busy the nights we were there. They had run out of rollaway beds, so you will want to make that request well in advance if you need one during busy weeks.

The suites included free mini bar access which was restocked each day with a few waters, juices, soft drinks, and beer. There was some confusion over whether the suites included breakfast. We were first told no at check-in because of how we booked the suite, then they came back and said yes it was included for the suite, and then at check-out they tried to charge us for breakfast until I explained we were told it was included and they removed the charge. So, I really have no idea what the breakfast rules here really were. I will say that the breakfast buffet was very good and certainly a convenient way to start the morning if it happens to be included in your room rate or room type.

We did not make use of the spa or indoor pool on this trip, but it was nice having those amenities available without leaving the building. As you can see below, this hotel was selling standard rooms for £414 per night on our dates, so even at the current 70,000 Club Carlson points per night price, it can be a tremendous award deal during peak times. On non-peak dates, cash prices or cash and points awards may make more sense. When searching for a room for my mom, we found that the senior citizen rate actually saved a good amount off the next lowest rate we could find, so keep that in mind if it applies to you. 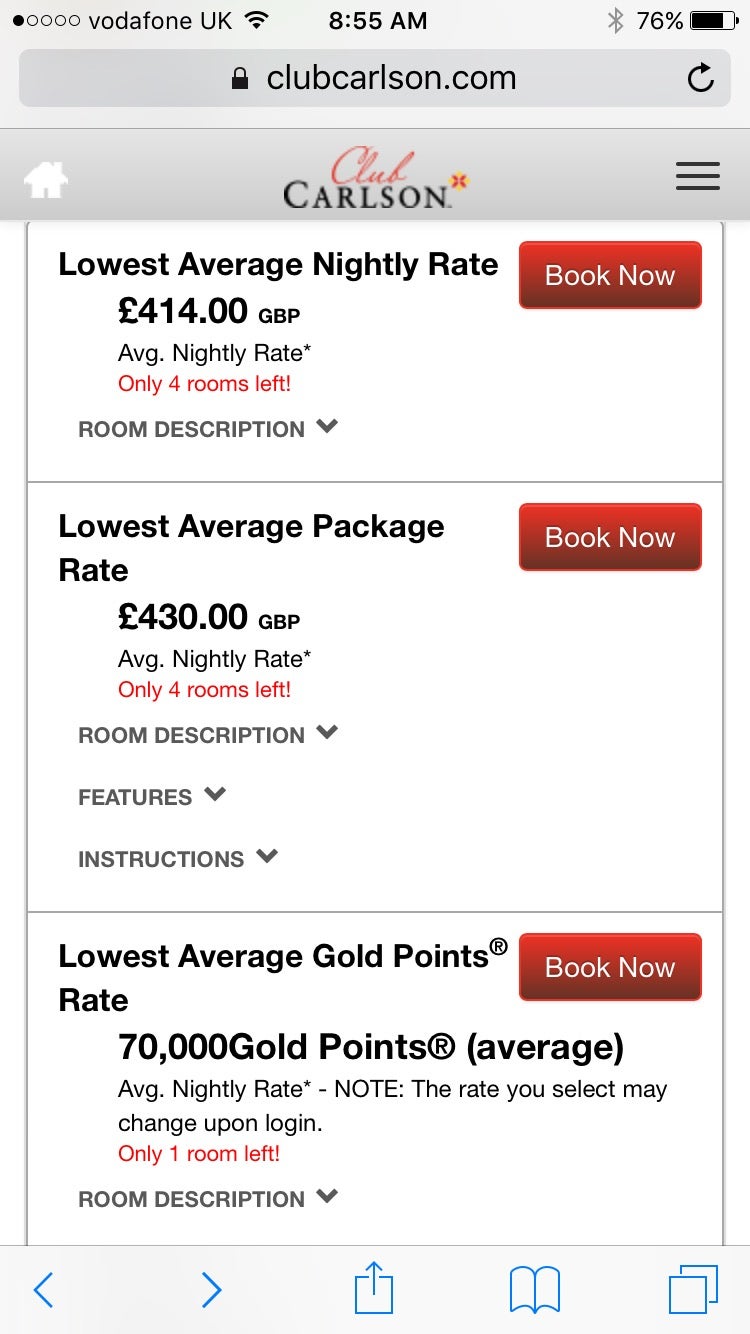 Here are some other posts from our recent family UK trip…

Taking the Train from London to Edinburgh

An Edinburgh Must Do: The Military Tattoo

Summer Hull aka Mommy Points, ran the Mommy Points site for families who want to travel more for less using miles and points for seven years and now heads up TPG Family when she isn't exploring the world with her own two girls.
You might like
Act fast: New airline to Europe with flights starting at $130 one-way
Deals
8h ago
CDC, State Department warns Americans “do not travel” to the Caribbean and other nations due to COVID-19
News
9h ago
Act fast: Darn good Delta deal alert with tickets starting at 5,000 SkyMiles
Deals
9h ago
Delta SkyMiles® Platinum American Express Card