These Decked-Out Luxury Cruise Ships Have it All 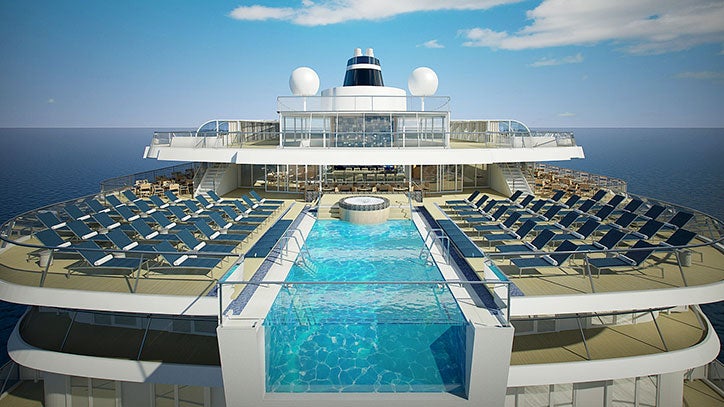 These Decked-Out Luxury Cruise Ships Have it All
This post contains references to products from one or more of our advertisers. We may receive compensation when you click on links to those products. Terms apply to the offers listed on this page. For an explanation of our Advertising Policy, visit this page.

Looking to set sail in style this summer and beyond? TPG Contributor Adam Erace shares his picks for some of the most luxurious cruises around the world.

Don’t call it a cruise ship. No, seriously, don’t — the World’s publicists think it’s confusing to refer to the luxurious colony of floating residences they represent as such. The World is a boat, or rather, it exists on a boat that's been traveling on water and visiting exotic ports like any other cruise ship since 2012. But the World is more a lifestyle than a self-contained vacation — albeit one for the fabulously wealthy, who purchase/rent 165 plush apartments with private verandas, framed art, marble bathrooms, etc. for yearlong hop-on/hop-off itineraries. The World’s 2015 journey began in Singapore and will wrap with winter holidays in Antarctica.

Royal Caribbean Anthem of the Seas

Royal Caribbean milked the press circuit last year with the premier of its new Quantum Class boat, Quantum of the Seas, a ship kitted out with headline-ready amenities such as robot bartenders, bumper cars and an observation globe cantilevered over the waves. Its sister ship, the 2,090-stateroom Anthem of the Seas, was christened in April, making it the youngest in this award-winning line. Anthem is spending its summer sailing through the Mediterranean, Northern Europe and the Canaries, then repositions to Cape Liberty, New Jersey for Caribbean sailings this fall.

Perhaps in a move to out-Quantum competitor Royal Caribbean’s Quantum Class ships, Norwegian’s 4,200-passenger Escape sets sail this fall stocked with buzzy thrills: Ninja Turtle mini-golf, tandem racing waterslides careering across the pool decks and a three-story high ropes course that includes the Plank, a daredevil-tempting eight-foot extension over the side of the boat. If you prefer your adventures on your plate, Norwegian ups its game here with outlets from Miami’s Pubbelly group, the Mondavi family, Jimmy Buffet and Iron Chef Jose Garces. Garces’ Bayamo occupies a part of the Escape called the Waterfront, a first-at-sea quarter-mile promenade that lets passengers dine al fresco. Escape begins sailing year-round Caribbean itineraries starting in November.

Since its founding in 1997, Viking has made Europe’s rivers its dominion. That’s all about to change with the debut of the Viking Star, the first vessel in the company’s new oceangoing division. Star accommodates 928 passengers in Scandinavian-inspired staterooms that start at 270 square feet (large for cruise ships) and all feature private verandahs. Outside the rooms, you’ll find dignified Downton-ish pleasures (chef’s table tasting menus with wine pairings, afternoon tea in the Winter Garden, a snow grotto in the spa) but what’s really exciting is the pool, which has a retractable roof and infinity edge that makes you feel like you’re swimming in the Mediterranean. Star departed Istanbul for Venice last month on her maiden voyage; she’ll spend the rest of the year sailing around Scandinavia and Western Europe. Two sister ships are already on order.

Dance classes, eyelash extensions, cooking lessons from British celebrity chef James Martin and art walks through Britain’s largest floating art collection (6,000+ pieces) are just a few of the diversions on P&O’s 3,600-passenger Britannia, which made her maiden voyage in March from Southampton through the Mediterranean. Grown-ups will love the ship’s comprehensive kids' club, as well as adults-only zones such as the VIP-access Retreat, an al-fresco hideaway off the immaculate Oasis Spa, and the Serenity Pool flanked by marshmallow loungers and shaded cabanas.

Regent is calling its upcoming 750-passenger Explorer the Most Luxurious Ship in the World™ — no small claim. However, it's walking the walk with ooh-la-la trappings including rare Breton blue lobster at the French restaurant, pool attendants who will polish your sunglasses, a Canyon Ranch spa and state-of-the-art kitchen for culinary classes. But where Explorer will really stand out is the Regent Suite, a 3,875-square-foot palace-at-sea: think wraparound balcony, 270-degree bow views, in-suite sauna and steam, butler, Hermes amenities, grand piano and 1980s-mobster amounts of gold and marble. The price is more than $60,000 per person on Explorer’s 14-night Monte Carlo-to-Venice route... but at least business-class airfare is included.

Be sure to see these related posts:

Planning to hop aboard any of these ships this year, or take another cruise? Let us know about it in the comments below!