An Early Look at the Future of Starwood Hotels

Articles
Zach Honig is Editor-at-Large at TPG, with contributions ranging from articles digging deep on loyalty programs and credit cards to delivery flight coverage to drone photography and much more.
Follow
May 19, 2015
•
7 min read 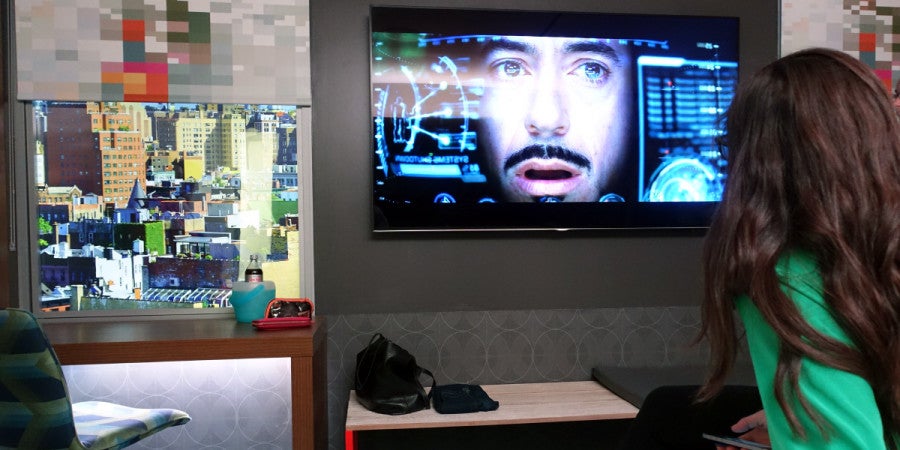 An Early Look at the Future of Starwood Hotels
This post contains references to products from one or more of our advertisers. We may receive compensation when you click on links to those products. Terms apply to the offers listed on this page. For an explanation of our Advertising Policy, visit this page.

From smartphone hotel room unlocking to robot butlers, we’ve already seen quite a bit of innovation when it comes to select Starwood brands. TPG Editor-in-Chief Zach Honig dropped by One Star Point (Starwood’s world headquarters) for a look at other technologies coming soon to a hotel near you.

If you walk into an early adopter's home, you might find smartphone controls for lighting and air conditioning, full-color LED light bulbs and even keyless entry at the front door. Using the home of the future as a guide, Starwood is looking to up its high-tech game at several entry-level brands, giving it an edge over Hilton, Hyatt, Marriott and other superchains in what's likely the most competitive hotel landscape ever.

Below you'll find 10 technologies that Starwood plans to roll out within the next five years (if not sooner) at Aloft, Element and Four Points by Sheraton hotels. If you're looking to book an SPG stay, consider picking up the Starwood Preferred Guest Credit Card from American Express, which currently offers 25,000 bonus Starpoints after you spend $3,000 within the first three months, enough for more than 10 free nights at Category 1 Aloft and Element hotels.

The Aloft room of the future might include LED lighting (more on that below) with in-wall controls, but perhaps the most exciting addition is smartphone control of the room, letting you set the temperature, control the TV and even brew a pot of coffee all through a Starwood app.

Starwood is currently working with Philips, one of its many manufacturer partners, to build out a commercial solution similar to the company's Hue consumer lightbulbs. With these full-color LED bulbs in place, guests will be able to select their color preferences or use mood lighting presets, such as warmer light to wake up in the morning and cooler (or multi-colored) lights to wind down at night.

Perhaps one of the most exciting (and practical) additions, the Element demo room has a pair of USB outlets installed throughout the room, including at each bedside table, making it easy to charge devices without moving furniture to dig for a free power jack.

I usually prefer to explore the city I'm visiting rather than watch TV in a hotel room, but business travelers often travel to the same destination week after week, opting to unwind with a TV show or movie each night instead. In this hotel room, Starwood is testing larger models, such as this giant Samsung TV. Meanwhile, a Four Points by Sheraton demo guest room down the hall has side-by-side panels with dual headphones, letting you and your roommate watch different programming before bed.

Most guests would be happy just to have a large standing mirror at all, but Starwood could takes things up a notch with these smart mirrors, which let you review news, stock info and a weather forecast as you're getting ready to start your day.

Perhaps a bit more far-fetched than some of Starwood's other ideas, this concept employs an RFID tag like the one seen above to track your movements. As your elevator door opens up, for example, a tag in the carpet could recognize that you're there and illuminate an in-floor guide light to help you find your room. Similar tags in a hotel room could turn on a bathroom light when you get out of bed at night.

Starwood plans to roll out these high-tech exercise bikes in select hotels beginning later this year. This current iteration, developed by Oculus, requires a tethered computer, but new models from Samsung could provide a more seamless experience. Content is still in the works, but I tried it out by riding on a seaside trail in Spain — perhaps something I wouldn't try at home, but an experience I might welcome in a hotel.

8. Virtual Reality in the Lobby

Similar to the exercise concept seen above, this iteration could let you experience local activities — such as skydiving, zip lining or even snorkeling — as you sit in the hotel lobby, allowing concierge staff to demo different offerings before you book. Hotels could also use Samsung's Gear VR headset to highlight other content, such as concerts at other properties.

Starwood has already begun to roll out SPG Keyless, allowing you to bypass the front desk at check-in and unlock your hotel room using a smartphone instead of a traditional key. There are currently 123 hotels online, and the chain expects to offer the service at all Aloft, Element and W hotels by the end of this year.

Botlr, Starwood's robot butler, is currently roaming the halls at the Aloft Cupertino and Aloft Silicon Valley. Hotel staff can deploy Botlr to deliver items directly to guests rooms, including replacements for necessities left at home and snacks from the lobby.