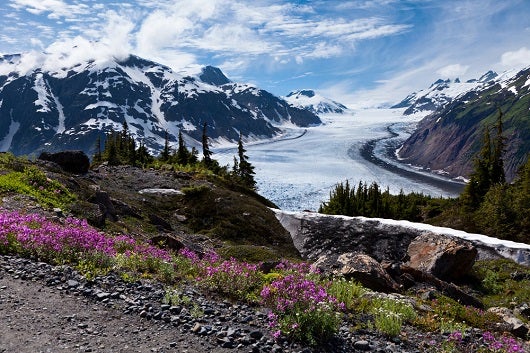 Best Transfer Partners for Award Flights to Alaska
This post contains references to products from one or more of our advertisers. We may receive compensation when you click on links to those products. Terms apply to the offers listed on this page. For an explanation of our Advertising Policy, visit this page.

Alaska is a fantastic destination for sightseeing and outdoor recreation, but it's a long flight from what Alaskans call "the lower 48," and it's truly vast. At twice the size of Texas, Alaska is by far our largest state. It's also an interesting award travel destination, since some airlines include Alaska as part of the continental United States, while others create a separate zone like they often do for Hawaii.

Special considerations when traveling to Alaska

Several airlines offer service to Anchorage, and some have seasonal service to Fairbanks and Juneau. For all other destinations, award travelers will have to rely on Alaska Airlines, which offers extensive service throughout the 49th state.

Thankfully, Alaska is a Starwood transfer partner, and flights on Alaska can also be ticketed with miles redeemed from other frequent flier programs including LAN, Delta SkyMiles, Emirates Skywards, Cathay Pacific Asia Miles (economy class only), Air France/KLM Flying Blue, American AAdvantage, and British Airways Avios. Therefore, using miles from Alaska or one of these partners offers major advantages for those traveling to destinations other than Anchorage.

When you use Alaska miles, you also have the option of booking intra-state award flights on its partners PenAir and Ravn Alaska (formerly Era Alaska), which operate service to numerous remote airfields.

Economy
Alaska Airlines stands out as the most attractive airline transfer partner in the Starwood program, due to both its extensive network as well as its reasonably priced awards. Economy class awards are just 25,000 miles round trip, while first class is 50,000 miles, the same price most airlines offer for domestic awards. Alaska also offers intra-state awards for 15,000 miles in economy and 30,000 miles in first class.

Other carriers offering 25,000 mile economy class awards (by alliance) include:

Finally, the British Airways Avios program is distance based, and award flights within 3,000 miles are 25,000 miles round trip. This includes flights to Anchorage from Chicago and points on the west coast. For travel within Alaska, flights on Alaska Airlines under 650 miles can be had for as few as 4500 Avios!

First class
Moving up to first class, Alitalia offers award flights from 40,000 miles, followed by Singapore awards on United for 40,000 miles, and Virgin Atlantic awards on Delta at 45,000 miles. United, American, and US Airways all price Alaska awards at 50,000 miles, the same as other destinations within the continental United States. Although there are no three-class aircraft servicing Alaska, these carriers will charge more for service that includes first class on a three-class plane.

Those redeeming miles from this program lack the option to transfer points to Alaska, US Airways, and American, but they do have some other unique options.

Frontier Airlines is a transfer partner that offers seasonal service from Denver to Anchorage, Juneau, and Fairbanks. Surprisingly, award tickets to Alaska start at just 20,000 miles round-trip, the same price as other destinations in the continental United States. Just be advised that travelers on Frontier award tickets must pay extra for both checked luggage and any carry-on bags that are larger than a "personal item."

This leaves the following options in economy at 25,000 miles round-trip:

First class
In first class, Alitalia remains supreme at just 40,000 miles round-trip, along with Singapore awards on United for the same price. The only options for flights on American are distance-based awards from BA, Iberia, or the Asia Miles program of Cathay Pacific, which is also a partner with Alaska Airlines.

The smaller list of Ultimate Rewards transfer partners makes redeeming Ultimate Rewards points quite a bit more simple. The biggest tip is that you'll do better redeeming 40,000 miles for a Singapore award for a first class ticket on United than you will if you transfer your points to United MileagePlus, which requires 50,000 miles. If you want to fly Delta, you can redeem your miles with Korean Air, but you'll have to endure their tedious award ticketing bureaucracy. Instead, choose Virgin Atlantic, which offers Delta awards at 25,000 miles in economy or 45,000 miles in first. Finally, British Airways awards will offer you access to American and Alaska flight awards as described above.

Now that Citi ThankYou Points can be transferred to 8 airline partners, the ThankYou program is now part of the conversation. Like Ultimate Rewards, the list is small, so options are relatively easy to parse.