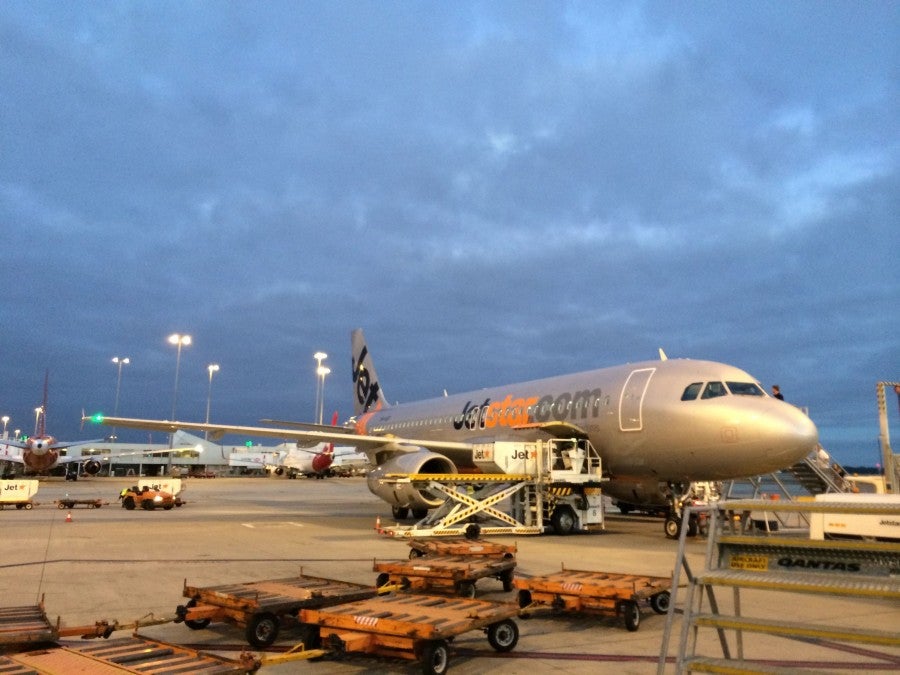 Trip Report: Jetstar Economy Class Melbourne - Hamilton Island
This post contains references to products from one or more of our advertisers. We may receive compensation when you click on links to those products. Terms apply to the offers listed on this page. For an explanation of our Advertising Policy, visit this page.

So far in my series on my trip to Australia with TPG Managing Editor Eric, I’ve covered how I used miles to book my award ticket, my flight from LAX-MEL in United GlobalFirst, the day I spent wine-tasting out in the Yarra Valley, a restaurant review roundup of all the fantastic places we ate in the city, and my review of the Westin Melbourne. For today's trip report, here are my thoughts on the Jetstar flight we took from Melbourne to our next destination, Hamilton Island.

After a couple days in Melbourne, it was off to our next destination, Hamilton Island. Hamilton Island is a little resort island off the coast of Queensland that's a popular jumping off spot for Great Barrier Reef activities. We had originally planned to go to Cairns, but thought that Hamilton Island might be a better choice since it's small, easy to get to, quite close to some great dive spots on the reef, and just made more sense.

There are a couple flights a day from Melbourne to Hamilton Island to choose from. On Mondays (the day we were flying), Qantas offers a single non-stop flight on its partner Jetstar that departs at 7:00am and arrives at 8:50am (there's a one hour time difference, so the flight is actually about 2.5 hours). Otherwise you have to transit through Sydney, Brisbane or Cairns, adding significantly to the travel time.

Virgin Australia also offers a non-stop flight departing 8:30am and arriving at 10:35am, but it was sold out the day we were flying, and the other options were much longer since they transited through Sydney or Brisbane. So because of that and because we just needed a one-way, we didn't look into redeeming Delta miles on Virgin Australia, though intra-Australia awards would have been 30,000 miles roundtrip in economy and 45,000 miles in business - not worth it based on airfares starting at $189 AUD ($171) in my opinion.

Because flights were still relatively cheap, we just decided to purchase our tickets on Jetstar for a base fare of $203.50 AUD ($183 USD) each. You can't redeem American miles on Jetstar, so that wasn't an option, though economy award tickets are 20,000 miles each way within the South Pacific (if we'd been able to fly Qantas).

As you can see in the bundling packages the airline offers below, that fare includes just your seat and a 10kg carry on.

However, as you all likely know by now, I'm 6'7", so I can't leave coach seating to chance. I actually purchased two Plus bundles, one for Eric and one for myself, so that we could choose our seats in advance. It also theoretically would let us earn Qantas points and give us each $5 food/beverage vouchers. Eric's was $29 AUD ($26 USD) and he got a seat on the aisle in the row 1 bulkhead. My Plus bundle actually ended up being $35 AUD ($31 USD) because the seat I chose was on the other side of row 1 with even more legroom.

The Plus bundle also allows you to change the time or date of you flight without paying change fees (fare difference may apply) and choose a seat from the standard seat selection. The Max bundle allows you to change the origin and destination of your flight and only pay any applicable fare differences. It's also refundable, and gives you free seat selection from any seat including Extra Leg Room and Upfront Seats, and Qantas Points and Status credits too.

The night before our flight, I checked in online because I actually ended up bringing a checked bag with me and I paid $25 AUD ($21 USD) to check up to 20 kg. Well, the following morning as I checked in, I found out my bag was actually 30 kg - and that meant paying $75 AUD ($63USD) more at the airport! Ah, discount carriers. Still check-in was a breeze, and though American Airlines' partner airlines page says that Qantas codeshares on Jetstar will not accrue mileage (only American-marketed Jetstar flights will - and this was not one), they let us enter our American Airlines AAdvantage numbers at check-in and said our fare class should entitle us to miles, so we're waiting to see if mileage posts (not holding my breath, but worth a shot!).

We had a little time before our flight, so I stopped on the way to get an iced coffee. Little did I know what a kerfuffle I would cause - because when heading through the boarding gate and out onto the tarmac, not only are you supposed to turn off your cell phone completely (because of refueling apparently, because ya know, cell phones often explode airplanes that are refueling), but I had at least 3 different Jetstar agents angrily tell me that I couldn't bring a hot beverage on the plane with me. I had to show them - each of them - it had ice in it and they relented, but what a stress first thing in the morning!

Onboard, things were much calmer. The crew was super friendly and helped me put all my bags up in the overhead since I was in row 1. I'm so glad I paid the extra money for the extra legroom, because I had miles of space.

Eric's seat across the aisle from me also had extra room, but not nearly as much thanks to a dividing wall between it and the galley. That's okay, though, because he's only 5'8" and didn't mind!

The flight was operated on an A320, and was all coach class with 180 total seats - 30 rows of six seats each in a 3 x 3 configuration. Among the special seats are the bulkheads in row 1 and the exit row 12. Seats have a standard pitch of 29 inches and are a mere 17 inches wide, though mine was marketed as having about 9 inches extra legroom, though in reality it was more than that.

They take their safety very seriously because they handed us and the exit row folks the following guidelines and asked us to read them.

We took off right on time, and a few minutes into the flight, the flight attendants rolled out a couple carts. The first was an entertainment cart where you could rent an iPad loaded with movies, TV shows and games for $10 AUD ($9 USD). On flights longer than 2 hours, it costs $18 AUD ($16 USD) and you can rent them at the time of booking. I had my own iPad, though, so I didn't rent one, but I thought it was interesting, and maybe even a better option than seat-back monitors with paid entertainment many US airlines now offer.

The crew also reminded us that we each had a $5 AUD voucher - and that pretty much just covered a small bottle of water and a packet of Tim Tam cookies - not much, but better than nothing, and certainly better than having to pay for water on a flight.

Other than that, the flight was pretty uneventful. People were barely up and about in the cabin. Eric and I got some work done, and then before you knew it, it was time for descent to Hamilton Island, where it was sunny and balmy.

More on our stay on Hamilton Island to come, but in the meantime, it was a pleasant enough short-haul flight on Jetstar - I'm only hoping that some AA miles post based on it, and that I get better at guessing the weight of my checked bag so I don't get hit with a last-minute fee if I fly them again!

Featured image by Al fresco boarding - our plane waits to take us to Hamilton Island.