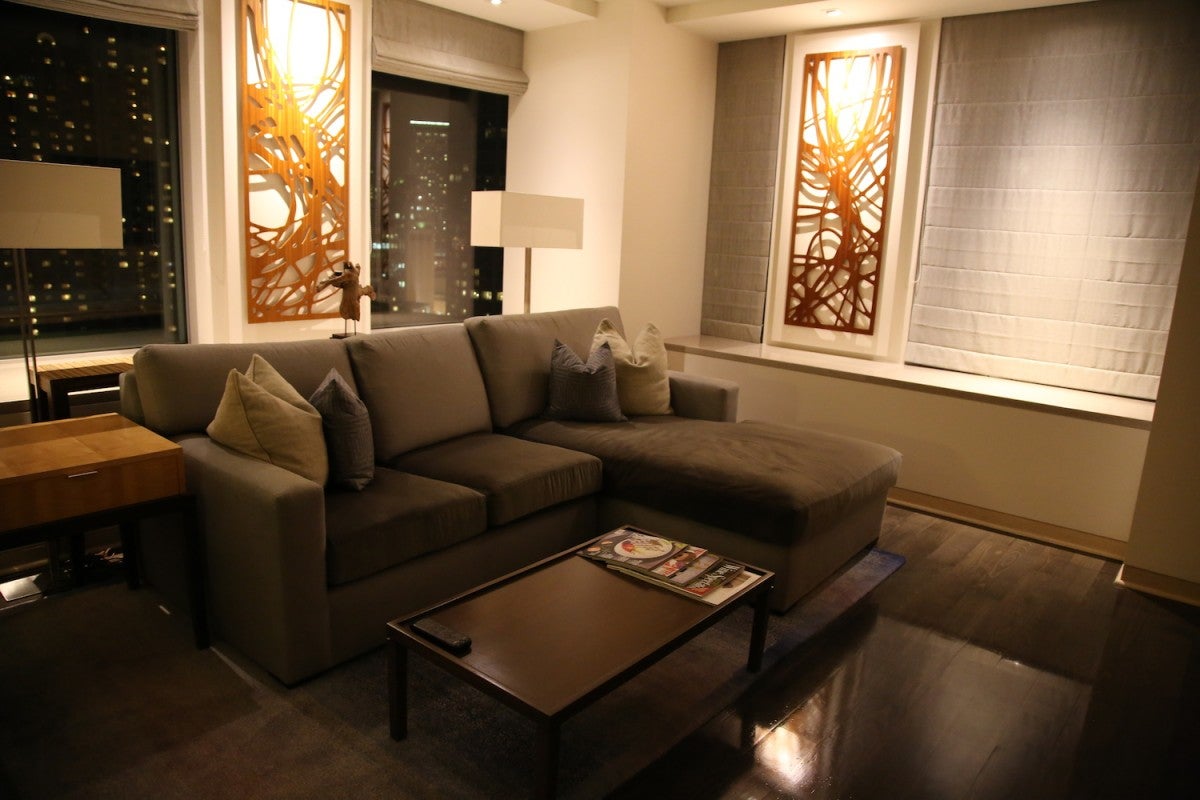 Hotel Review: The St Regis San Francisco Metropolitan Suite
This post contains references to products from one or more of our advertisers. We may receive compensation when you click on links to those products. Terms apply to the offers listed on this page. For an explanation of our Advertising Policy, visit this page.

This past weekend, I decided to take a last-minute trip to San Francisco with a few friends. We had a great time eating at some of the city's great restaurants (The Cavalier, Flour + Water and Zuni Cafe) and went up to Santa Rosa for a wine-tasting day trip to Inman Family Vineyards, which was more than worth the car ride.

This year I'm continuing to focus on retaining 75-night SPG Platinum, so my hotel focus was narrowed down from the start. I stayed at the W once and it was okay, but they don't have many suites and I wanted to use some Platinum suite upgrades for this trip. The Palace, Westin and Le Meridien are all nice, but I've wanted to check out the St. Regis for a while now. It's right near the Moscone Center and SF MOMA (Museum of Modern Art) and they allow small dogs for a $150 fee.

For the nights I was staying, standard Superior rooms were going for $405 per night plus tax, so I decided to redeem 20,000 Starpoints per night instead and use my Platinum Suite Upgrades to score an Astor Suite instead, which was going for $955 per night and is four room categories higher than a Superior. When scoring a suite you get access to a Butler, which means you get two free items pressed per guest per stay, free coffee/tea service delivered in-room and free unpacking/packing, which is probably my favorite benefit since I hate unpacking- especially after a long flight and when my schedule is packed. So basically, not only do you get the bigger suite, but a free butler as well, which is why I use most of my suite upgrades at St.Regis properties.

Astor Suites are over 700 square feet and located on the corners of the building with windows on two walls and come with St. Regis's signature personal butler service with free clothes pressing upon arrival and complimentary coffee/tea service. The hotel has 260 rooms including 46 suites.

I checked in pretty late on a Thursday night with my friends and the front desk staff greeted me by name and ran through my list of Starwood Platinum benefits including free continental breakfast, 500 bonus points, free internet and a welcome amenity, then I was shown up to my room. I considered trying to invoke my YOUR24 benefit as well since I was checking in so late so I would have the room until late on my day of check-out as well, but since my flight back to New York was leaving at noon, I didn't see a reason to. Oh, and I was also upgraded a level above the Astor to the Metropolitan Suite, which are between 825 and 980 square feet and go for about $300 more a night than the Astor suite.

My ambassador had emailed the hotel on the day of my arrival, so that could have been helpful, because when I left NYC I was still confirmed in the Astor Suite, so the additional upgrade was a nice surprise. .

As the St. Regis site claimed, it was a corner suite and felt nice and large with floor-to-ceiling windows and nice views of the city. It is in an L shape with an entry foyer and a fairly sizeable living room with a chic sectional, a dark wood coffee table, side tables and floor lamps. There were some nondescript contemporary paintings on the wall with nice lighting on them between the windows.

On the wall opposite the sectional was a wall-mounted flatscreen with a somewhat hidden door to the master bedroom.

Beyond the living room area is a small office area with a leather-topped desk and two-line phone, and a small marble window seat. The walls are paneled in white American oak, which gives the room a clean look that is at once contemporary but classic.

The main room is separated from the bedroom by a little hall with a sliding wooden door. The bedroom looked the same as the living room with wood-paneled walls and crisp white linens with cream and taupe accents. There was another wall-mounted flatscreen and a huge king bed as well as a chaise lounge window seat. I really liked the minimalist color palette.

The bathroom was also super contemporary and clean, with limestone flooring, a dual marble vanity and a deep soaking tub with an LCD TV on the wall above it as well as two frosted-glass stalls - one for the WC and one for the walk-in shower with handheld and rainfall showerheads. The bathroom was stocked with St. Regis's signature Remede spa products.

Spa
The Remede Spa is expansive with a salt water pool, steam room and sauna. I got a 90 minute massage that was a whopping $336 when all was said and done (buyer beware.. I hadn't looked closely at the menu and that price was quite a shock when I checked out!).

Dining
Ame is the fine dining option with "New American" seasonal menu items and a large crudo and raw bar, while Vitrine is the casual lunch and dinner restaurant on the fourth floor and where my Platinum breakfast was served. There is no buffet, so the Platinum breakfast is the Continental option on the menu, which is a couple delicious pastries, yogurt, granola and juice/coffee. I'm not a huge fan of continental breakfast, but this one was pretty delicious.

I didn't try out the restaurants, because I was too busy checking out places that TPG readers strongly recommended when I tweeted that I'd be visiting San Francisco.

For this whirlwind trip, I thought the St. Regis was a great option and use of points - especially given the rather high room rates and the fact that I was able to confirm a beautiful suite that would otherwise have cost nearly $1,400 per night.

Have any of you been to the St. Regis? What are your thoughts on it compared to Starwood's other San Francisco properties?
[card card-name='Starwood Preferred Guest® Credit Card from American Express' card-id='22034416' type='javascript' bullet-id='1']

Featured image by The living room of my Astor Suite.