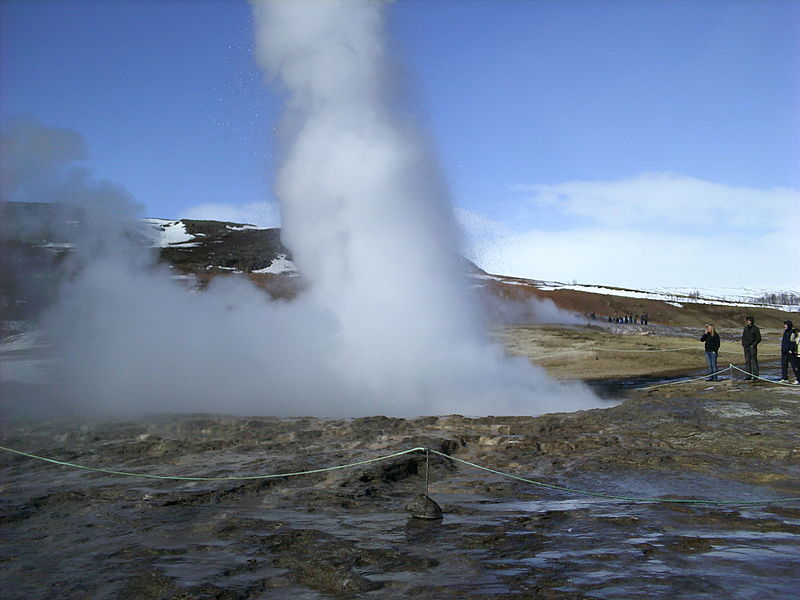 Trip Report: Five Days in Iceland- Horseback Riding, Whale Watching and the Golden Circle
This post contains references to products from one or more of our advertisers. We may receive compensation when you click on links to those products. Terms apply to the offers listed on this page. For an explanation of our Advertising Policy, visit this page.

Last week I decided to go to Iceland last minute by redeeming Delta SkyMiles to fly BusinessElite from JFK to Reykjavik and using a combination of Club Carlson points and cash to check out both Radisson Blu properties in Reykjavik. Since I hadn't been out of the country since May, I booked the ticket on a whim and threw together some accommodations and activities for the 5 days I would be there. Luckily, TPG Managing Editor Eric was able to change his plans and was able to meet me a few days later so we could explore Iceland together and capture some great footage for our readers.

The first day I was in Reykjavik I was on my own and booked a horseback riding tour with Islenski Hesturinn Riding Tours. The company is a small family firm made up of locally licensed tour guides and their base is just ten minutes from downtown Reykjavik. They offered a pick-up and drop-off service that was included in the tour price, but since I had made my reservation at the last minute I ended up taking a cab there. I wish I had planned ahead and gotten picked up at the hotel since it was a $40 cab ride for just a short drive. Luckily I was able to get dropped off at my hotel, the Radisson Blu Saga, after the tour ended by one of the staff members.

I ended up taking the afternoon volcanic landscape tour that is around 2.5 hours long with just about 1.5 hours of riding. The price for the morning and afternoon tours were ISK 10800 ($88.75) per person, while the evening 8pm tour costs ISK 15800 ($130) per person. Included in the tour price is the rental of helmets, rain gear, boots and gloves. The tour guides were also kind enough to e-mail each of us pictures from the tour for no extra charge.

Before taking off on our journey around the crater rock area, we had a full 3o minute safety briefing and got situated on the horses with the help of 4 staff members. This was a very different experience from when I went horseback riding in Argentina and they basically just threw us on the horses and said "good luck." In our group there were 5 other riders, 2 from Italy and 3 from Norway - two were young kids who did really well on the horses. The two guides who accompanied us on the tour were super friendly and gave us a lot of great educational information as we rode along. Begga, our main tour guide who is also a co-owner of Islenski Hesturinn Riding, was awesome and I would definitely recommend asking for her if you tour with them.

I found the way the horses rode to be very interesting. Normally horses have 4 gaits - walk, trot, canter and gallop but Icelandic horses are known for being "five-gaited." The Icelandics consider the canter/gallop to be one gait, and then have two additional unique paces. Most of the time we were at tölt, which is where the horse has more freedom and liquidity of movement and we would lean back on it almost like you're sitting on a couch. The horses were all beautiful and really well behaved, they were much more stocky and not as tall as horses we're used to but they rode well and made the tour really enjoyable.

On Friday after Eric had arrived, we went on a tour with Elding Whale Watching. The company is located right in the old harbour of Reykjvaic so we walked over from the hotel and got suited up in our warm jackets before heading out for the tour that usually runs for about 2.5-3.5 hours. For adults it costs ISK 8,000 per person, for children ages 7-15 tickets are ISK 4,000 and ages 6 and under ride for free.

Apparently the whales didn't want to come out to play that day because I only saw one for a split second and that was it for the rest of the tour. Another downside was that we had a pretty rough day at sea and unfortunately by the time were on the way back to shore, half of the boat was seasick. Luckily Eric and I were able to fight off nauseousness and even enjoyed a few Icelandic Viking beers. Since it was such a rough tour and we didn't get to see much, everyone received a voucher for one complimentary whale watching tour valid for two years, which was a nice touch.

My favorite and most memorable part of the trip was renting a Land Cruiser from Budget (~$200 for the day) and taking on the Golden Circle tour by ourselves. Eric and I first looked into booking a private tour with the Stefan and were scheduled for hotel pick up on Sunday morning, but ending up cancelling when we decided to tackle the tour on our own. There was some miscommunication between us and the tour guide so he ended up shuttling to the hotel twice to get us even though we had cancelled. I felt really bad about that and apologized for wasting their time. While I think the tour with Stefan would be fantastic, it was going to be a really long day (a 6.5 hour tour) and Eric and I wanted to be operating under our own steam so we could go to each stop as we pleased. Watch the video below to see clips of what we saw along our Golden Circle tour.

The first stop of the day was to Iceland's Geysir Geothermal Area where there is about a 100m wide strip of land that the hot springs are aligned on. The Strokkur, which is the most energetic sprouting spring in Iceland, erupted every five to ten minutes. I’ve never seen a geyser in real life before so it was really exciting getting to witness the eruption up close.

Next we drove on about 20-30 minutes to Gullfoss, the Golden Waterfall. The views there were absolutely breathtaking (as you can see in the picture below), although they don’t do it justice. We hung around there for a little bit and then decided to make the 2 hour trek to the glacier.

To get to the glacier we had to take this windy, dirty road for several miles which made me very happy to be driving a Land Cruiser with 4-wheel drive instead of a rinky dink rental car. Once we arrived, we got out of the car and took in the incredible view for as long as we could stand the freezing temperature. This was an unforgettable experience since I've never been on a glacier before and we were the only people there so we had the space all to ourselves without being part of a pack of tourists. Watch the video below to hear what I thought about our day.

During our time in Iceland we made it to a couple great restaurants that I would definitely recommend. The first night I went to Hereford Steakhouse, where they offer a whale and puffin menu. Apparently consuming whale is a hot button issue in Iceland so I stayed away from it but my friend tried it and said it was pretty good. I had a delicious beef steak instead that was cooked to perfection and was thoroughly enjoyed.

Thursday night I had to try out the famous hot dog stand, Baejarins Beztu Pylsur, that’s in downtown Reykjavik located right next to the Radisson Blu 1919 hotel. Their signature item is the lamb hot dog, and although I’m not normally a big fan of lamb I had to try it anyway. To my surprise it was really tasty and was topped with crunchy onions that really added to the flavor. If you’re a lamb lover - this is a must stop spot that you will really enjoy, and they're open 24 hours!

Friday night after whale watching, we got off the boat and walked right over to Hofnin, which sits of the wharfside of Reykjavik's Old Harbour. The food we ordered was ok, but nothing spectacular. I ordered a chicken dish that was fine, but in hindsight I wish I would have tried out the restaurant next door, Fish and Chips, which several friends raved about.

One of the really popular happy hour spots among locals is the bar at the 101 hotel. We went there on Saturday night and there wasn’t too much of a crowd and the bar was relatively empty. I didn’t mind missing a huge scene because we were able to relax at the bar, have some drinks and order off the menu, which was pretty basic but the food was really rich and filling. I had a tagliatelle with seafood, which came in a cream sauce which was a little too heavy for me. My friend got the fish of the day, a catfish, with vegetables, which I should have ordered in hindsight!

Some other restaurants we missed that I would have liked to try are Borg Restaurant and Grillmarkadurinn, which TPG readers recommended. Feel free to share any other thoughts/recommendations for others who may be visiting soon.

My Thoughts of Iceland

Although it was a relatively quick trip to Iceland, I absolutely loved my time there. During the summer season it's a cool 50 degrees during the day and drops into the 40's at night, perfect weather to be comfortable walking around in jeans and a fleece with a jacket in case of rain. Before going to Iceland, I wasn't aware that it stays light out for almost 24 hours so it was a little tough to adjust to and messed with my sleeping habits a bit but there's nothing like having those extra hours of sunlight to roam around the city and take in the sights. Iceland is definitely going on my list of places that I will be returning to in the winter when I can check out the Northern Lights and hit up the Blue Lagoon, which I just didn't have enough time to do.