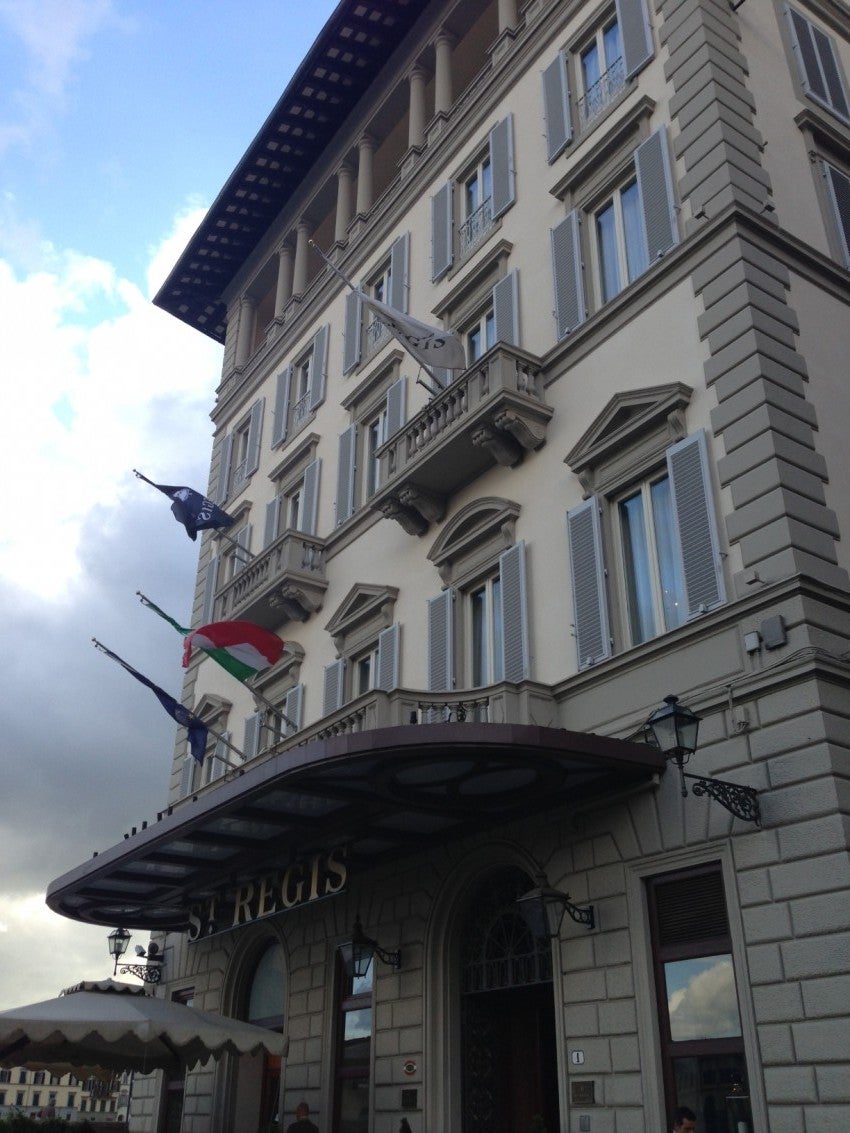 Hotel Review: St. Regis Florence Junior Suite and Premium Deluxe Room
This post contains references to products from one or more of our advertisers. We may receive compensation when you click on links to those products. Terms apply to the offers listed on this page. For an explanation of our Advertising Policy, visit this page.

After arriving in Milan last week on Delta's 767-400, my friend and I took the train from Malpensa Airport to Milano Centrale railway station so we could then connect to the high-speed train to Florence. Our plan there was to spend two nights there before returning to Milan.

The airport train to Milano Centrale airport made a number of stops and ended up taking about an hour. While it was a little exhausting after a transatlantic flight, paying 11 euros sure beat paying a taxi 90 euros - and with morning rush hour traffic, the taxi may have taken almost as much time.

Unaware of the travel time between the airport and railway station, we arrived at the station late and had only few minutes to grab tickets before departure. Had I known exactly what train we'd be catching to Santa Maria Novella train station in Florence, I would have bought the tickets in advance and secured us seats in business or first class, but by the time we got there only coach seats were available. Although coach was fine, I would have much rather been in a better class since it was a packed train and we wanted to be comfortable for the hour and 45 minute ride after our transatlantic flight. I would recommend buying tickets in advance to avoid the hassle at the train station and to avoid the train you want from being sold out. I'll be doing a review of our train ride from Milan to Florence so stay tuned for that.

On the day of our departure when I realized it was best to cut out Rome and focus on Florence and Milan, I booked two rooms at the St. Regis and added my friend's name on one of the reservations. However, when we were boarding our flight at JFK, I noticed only one reservation was showing in my SPG account. Nervous that there was a mistake and only one room booked for us I emailed my Starwood ambassador to find out if the second reservation was still in place. She confirmed that there was only one room and asked for my reservation information, though I was onboard my Delta flight and had to turn my phone off before I could respond. I figured I'd handle it when I landed, which would have been in the middle of the night for her, but luckily a new initiative of the Starwood Ambassador program is that hey have a 24 hour help desk so even when my ambassador is off duty someone else on the team was able to help me and get both reservations back under my name and Starwood number. The hotel apparently had stripped my SPG number off my friend's room, which they should not have done since I paid for both rooms.

When I first made the reservations I booked one room on points for 35,000 a night and one room at the paid rate of 562.50 EUR ($722) per night. I also applied suite night awards to the room I would be staying in. Luckily what ended up happening was after all of the back and forth about my second reservation, they ended up combining reservations, which resulted in the suite upgrades being re-deposited back into my account, but they kept me in the same junior suite and didn't take the upgrade certificates back, so it worked to my benefit. So even though there was some confusion and it was a bit annoying, I did get my upgrades back, got a really nice junior suite, and my friends who stayed next door to me were placed in a Premium Deluxe Room.

I will admit that 70,000 points for two nights was a huge hit to swallow since I value SPG points around 2 cents apiece but the hotel lives up to the price. Normally room rates are really high - especially during the summer where it is not uncommon to see 1,000 EUR ($1,283) a night for a Premium Deluxe and 1,920 EUR ($2,465) a night for a Junior Suite, and the hotel is routinely sold out. Valuation-wise I'm not going to get into the nitty gritty of my redemption, but I feel like I got a pretty good value since all our needs were met and the hotel staff really went out of their way to accommodate us and make us truly feel like VIPs. In my opinion, points are meant to be used for unforgettable experiences and staying at the St. Regis Florence was definitely one of them.

The Premium Deluxe room that my friends were staying in was almost as big as my Junior Suite and had an ornate canopy over the bed as well as a sitting area with a sofa and chair. The king size bed could be split into two twins if needed, which we ended up doing for the second night of our stay once another friend arrived.

Premium Deluxe rooms are usually around 30 square-meters and come with a work desk, Bose sound system, and 42-inch TV. As for the bathroom, it was covered in marble and had a large tub/shower combo, vanity, and double sinks.

The junior suite, which was a bit larger at 40 square-meters, had beautiful ornate artwork and Florentine decorations and had a spectacular view of the mountains in the distance. This room did have a separate living room area with sliding doors which was nice, but no canopy over the bed.

The bathroom in the suite was very similar to the other room and had a deep soaking tub/shower, double sinks, and vanity.

Two things that were annoying about our rooms was that we were in 333 and 332 which are located way in the back of the hotel. It was about a ten-minute walk from the main lobby back to the room and you had to go up a few steps to get there. I don’t think there was an elevator so these rooms don't seem to be handicapped accessible. And second, there was only one key per room which you had to leave at the front desk when you leave the hotel. If you're staying with a friend and come back to the room at different times you'll have to be escorted back to the room by someone from the staff if the main key is no longer at the front desk.

I can always count on my readers for great recommendations for my trips and you guys definitely pulled through this time with places to eat. We went out to two really great restaurants for dinner, La Giostra and Il Latini (which I will review in an upcoming post, but thankfully we had the hotel concierge to help us make last-minute reservations at the two very popular eateries). During the day we debated whether to go on different tours of the city, but we decided against it and and explored on our own. If we had wanted to book a few tours, the concierge told us they would have been more than happy to take care of it.

The only time the hotel failed was when we were on the other side of the city and couldn’t get a taxi. We called the hotel and the concierge basically said tough luck and nicely told us to figure it out on our own. We asked if they had a car service that could come and pick us up and they said no. They were extremely unhelpful in this situation and I don’t think that it was St. Regis-quality service. Luckily we were eventually able to snag a cab, but I was highly unimpressed by that experience and have relayed that feedback to the hotel manager. Tip: Getting taxis on the street in Florence isn't easy so plan in advance when possible!

Butler Service
All suites (even if you're upgraded!) come with St. Regis butler service. With this you have the option to have your bags packed and/or unpacked for you, get two items pressed, have your shoes shined and you could have complimentary coffee and tea service at any time upon request. We ended up taking advantage of the coffee and tea on the afternoon of our arrival. After traveling several hours and being jet-lagged it was nice to sit down and have a cup of coffee and some biscotti in my room.

One of the highlights of my stay was the Pommery champagne saber that occurs every evening from 7-8pm in the Garden Room. It was a perfect time to mingle and grab a drink before heading out to dinner. I actually visited Pommery when in Champagne last summer and really like their bubbly, so it was nice to get the free toast and snacks each night before dinner.

The St. Regis Florence is in a great central location of the city. Within minutes you can walk to the Uffizi, Ponte Vecchio, and the Duomo, all must-see spots in Florence. I loved that the hotel was situated right on the Arno River, close to both great shopping and sightseeing. While the Piazza del Duomo tends to be heavily congested with tourists, I enjoyed wandering down the less crowded streets checking out the small shops and restaurants where I could get a real feel for the authentic part of the city.

The hotel website states that it is a quick 5-7 minute walk from Santa Maria Novella train station, but I am very thankful that I didn't listen to that and opted to take a cab once we arrived in the city. The cab ride alone was about 10 minutes and the walk would have to be at least 10-15 minutes long. That length of a walk paired with cobblestone streets, luggage, and tried travelers could have been a disaster. If you're energized and traveling light the walk is doable, but not at the end of 14+ hours of travel with luggage.

Overall I absolutely loved Florence and would definitely stay at the St. Regis if I find myself back there any time soon. With the exception of that taxi incident, the hotel staff were all extremely nice and friendly and did whatever they could to make us feel comfortable there. To be able to share an experience like this in such a beautiful city with great friends was worth every point/penny!
[card card-name='Starwood Preferred Guest® Credit Card from American Express' card-id='22034416' type='javascript' bullet-id='1']

Featured image by The exterior of the St. Regis Florence.