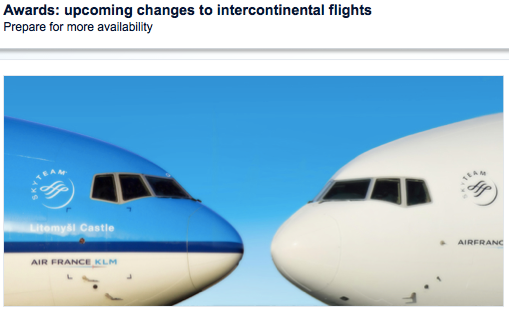 Major Flying Blue Air France KLM Devaluation
This post contains references to products from one or more of our advertisers. We may receive compensation when you click on links to those products. Terms apply to the offers listed on this page. For an explanation of our Advertising Policy, visit this page.

Late last week, Flying Blue, the frequent flyer program of Air France, KLM and Air Europa quietly rolled out some changes to award redemptions that will affect intercontinental award tickets including that starting in June 2013, it will be raising the number of miles for premium awards on Premium Economy, Business and First Class awards while also reducing surcharges on Economy and Premium Economy awards.

This spells mostly bad news, though not for everyone. Here are the main changes:

This is the good news – award levels aren’t changing and ticket surcharges are coming down. They will now be 50 euros ($65) each way between North American and Europe instead of 137 euros ($180) each way, so you’re saving over half.

The surcharges imposed will also now apply to connecting flights – so for example, before if you were to fly from New York to Paris and then on to Stockholm, your expected surcharges would have been around 188 euros ($245) each way. Now they’ll be the same flat 50 euros ($65).

These surcharges once made economy award tickets very expensive and not a particularly high-value use of miles, so this should change that equation somewhat. Miles redemption requirements are remaining the same.

The decreased surcharges will also apply to Premium Economy award tickets, which will now impose a 110 euro ($143) surcharge each way (220 euros roundtrip) instead of 188 euros ($245) which it is now. Not quite the same discount, but still significant.

Now comes the bad news. Whereas before a ticket in Premium Economy from Europe to North America would have cost 37,500 each way, it will now cost 50,000 miles each way. That’s over a 30% increase and the same cost as a business class award currently requires!

Adding insult to injury, not only are award requirements for business and first class tickets increasing, but fuel surcharges are remaining the same (although they now include connecting flights, making them marginally cheaper just in terms of cash).

Here are what award tickets from North America to Europe used to cost versus what they will cost starting in June:

For reference, here is the new award chart:

The silver lining is you will be able to book awards at the old rates until the end of 2013 by calling Flying Blue’s service center: “For your convenience, when the new award structure is implemented, you will still have the possibility to book an award under the current conditions, using the current Award Miles structure and carrier-imposed international surcharge amounts. Available until the end of 2013, this option will only be possible by contacting our Flying Blue Service Centre.” So although you might be paying more in surcharges at the current levels, if you are just squeaking by with the minimum amount of miles, you should try to book before the end of the year over the phone and avoid the higher redemption rates.

There are a couple of reasons this matters to a lot of people. First, although Flying Blue is a partner program of Delta, lately Air France has been releasing only minimal award space through Delta and it’s become very nearly impossible to book award flights through Delta.com, especially in premium classes. By contrast, award availability when booking through the Flying Blue site is wide open, even on Flying Blue’s discounted Promo Awards, many of which are available throughout the entire promotional period, so it’s a program worth paying attention to if you fly Air France or KLM a lot.

The other reason is that Flying Blue is a 1:1 transfer partner of American Express Membership Rewards, and there are sometimes transfer bonuses – the last one was for 35% in September – as well as a transfer partner of Starwood Preferred Guest, so this can be a versatile award program to use if you accrue either/both of those kinds of points and might use them to top up your frequent flyer account.

In terms of what this means for Flying Blue’s discounted Promo Awards, where award tickets between a rotating list of cities and Europe are half off in various classes on the three airlines for two-month periods, there’s no clear indication of how these will be affected, but if I had to guess, I’d say that they’ll remain half-off, just at the higher redemption rates, so business class tickets will cost 62,500 miles roundtrip instead of 50,000 miles, though at least the fuel surcharges will be reduced now.

All in all, this is mixed but mostly bad news. For flyers interested in economy only, the reduced surcharges might be good news since this will reduce the fees you pay on a roundtrip ticket to just 100 euros – a manageable $130 instead of the 274 euros you’re paying now. However, remember that surcharges do vary somewhat, for instance, this economy award ticket on non-stops from New York JFK to Paris CDG and back incurs $516 in carrier-imposed surcharges, not the $357 in the terms Flying Blue has provided above, so it will remain to be seen just how low these new fuel surcharges really end up being.

For flyers looking to redeem for Premium Economy and Business (you have to be a Flying Blue elite to get a first class award), this is almost all bad news since the surcharges still remain onerously high and you will be shelling out up to 33% more miles for your redemption.

This will make keeping track of and maximizing your transferable points more important than ever if you need them to top up for an award – especially if Flying Blue is showing a lot more award inventory than Delta. Still, I see this as just another drawback to using Flying Blue and I hope the other European carriers don’t follow suit with higher redemption levels.
[card card-name='Premier Rewards Gold Card from American Express ' card-id='22035076' type='javascript' bullet-id='1']

Featured image by One bright spot in the Flying Blue devaluation might be the opportunity to book First Class awards on Air France.