Fido Does FiDi: A Review of the W New York - Downtown 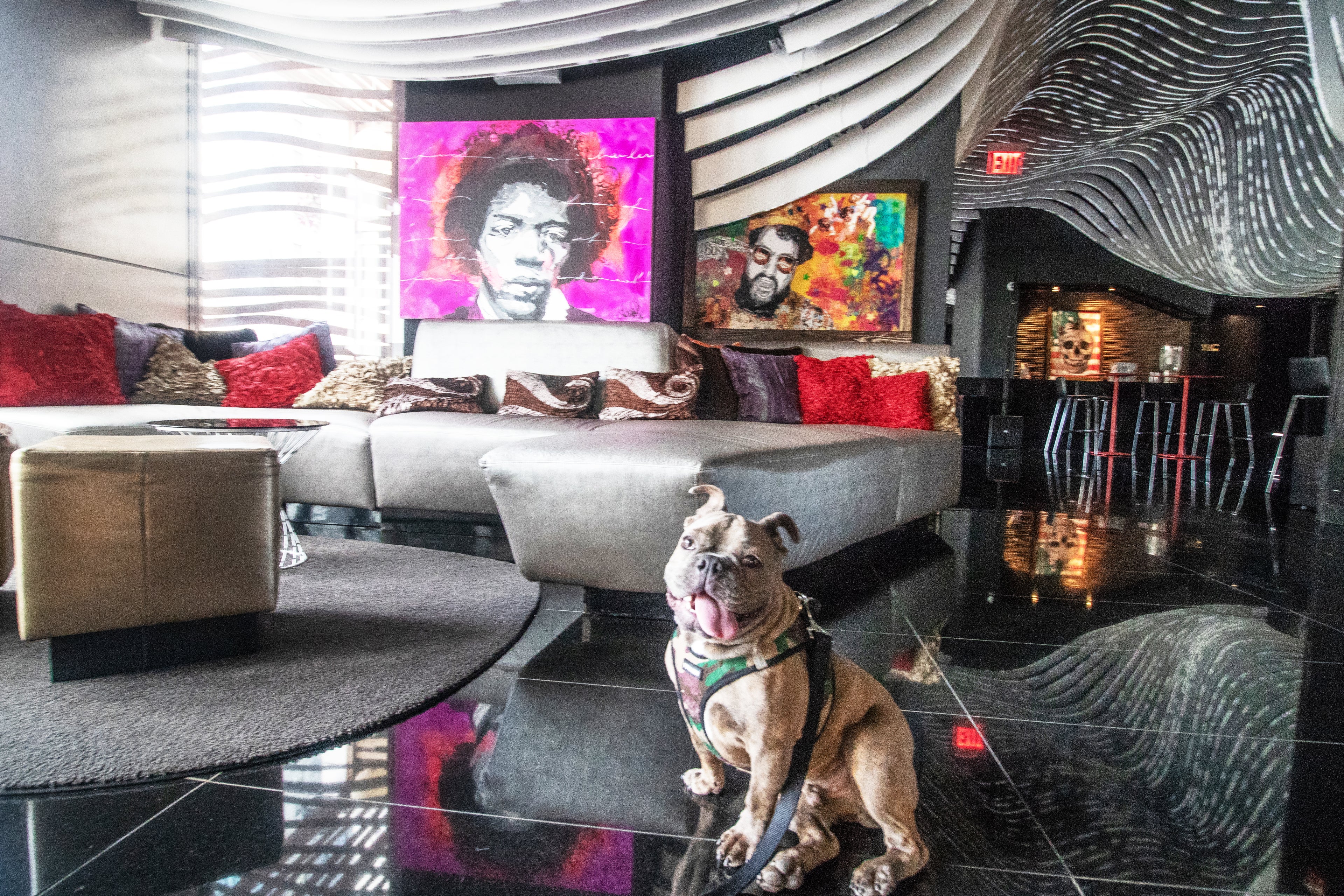 TPG's Points Pups Intern, Danielle Vito, recently took me, Swisher, on a staycation at the W New York - Downtown. Though TPG recently declared that he had outgrown the W brand, I was down to give the W a try. I'm a young and hip pup (I'm not even 2 years old yet!) and was intrigued by its PAW (Pets Are Welcome) policy.

TPG booked my stay for me before the former Starwood Preferred Guest Program merged with the Marriott Rewards program. Since we wanted to hold on to as many Starpoints as possible before the merger, we booked this stay in cash directly through SPG. We paid a total of $727 for my two-night stay with a Starwood Preferred Guest® Credit Card from American Express. If you'd like to use points to stay at this hotel, you can expect to burn between 40,000 and 60,000 points per night on this Category 6 property.

The W New York - Downtown was in the Financial District, the neighborhood at the very bottom of Manhattan. The hotel was in a prime location, just two blocks away from the World Trade Center and the National September 11 Memorial & Museum. Shopping centers within walking distance included Brookfield Place and the new Oculus Mall, which is worth a visit whether or not you're into shopping — the architecture was stunning!

Battery Park, the departure point for the Statue of Liberty boat tours, was a 10-minute walk away. For pet-friendly dining, we could head to Stone Street, the oldest street in New York City, a historic cobblestone street that's closed to automobiles and only allows pedestrian (and pawdestrian) foot traffic. The street was lined with restaurants and bars that offered seasonal outdoor seating from mid-March through the end of October. I could see enjoying a treat or two there while hanging out at the feet of a human companion (who could get a drink a few drinks of her own).

When Danielle and I arrived at the W, I saw there was a bowl of water and milk bones waiting for me. I hadn't even stepped a paw inside yet but could tell I was really going to like this place!

We took an elevator up to the lobby on the fifth floor. The check-in agents were so excited to see me that one of the staff members asked for a photo! The ladies love me.

Danielle had to sign a waiver acknowledging all of the pet rules and associated fees. There was a $100 nonrefundable pet cleaning fee in addition to a $25 daily charge. It may seem like a lot, but trust me, I'm worth every penny!

After the waiver was signed, the lady behind the desk handed us a special door tag that said "Animal House," which was to be kept on our door whenever I was in the room. The reverse side listed all of the pet amenities available for dogs and cats. The friendly lady also gave me a bag of treats! Yippie!

Even though we had arrived at noon, before the usual check-in time of 3:00pm, our room was ready for us. We took a quick look around the lobby (or living room as they like to call it at the W) before heading up to our room.

The ceiling was my favorite part. It looked like a wave of lights in the sky! I also loved the artwork on the walls of the living room.

We were upgraded to a Spectacular King guest room on the 19th floor, and the view was spectacular. We had a perfect view of the Freedom Tower and the 9/11 Memorial. The memorial had two beautiful reflection pools, each nearly an acre in size, and featured the largest manmade waterfalls in North America. I enjoyed watching everyone from above and napping on the comfy bench that ran along the windowsill.

The room was modern and had a simple design with a few red accents. The 350-square-foot room had a comfy king bed with four fluffy pillows.

Next to the bed was an iPod dock, alarm clock and a lamp, which had an outlet and a USB port attached to the base. There weren't any wall outlets next to the bed beside the ones connected to the lamps.

The minibar had a selection of snacks, including a $7 bag of chips and a $10 bag of peanut M&Ms. The selection also included a $20 W-branded cocktail shaker and a $16 W Hotels CD. (What's a CD?)

The fridge was stocked with an assortment of beverages. I gave it a quick look, but I was content with the toilet water.

Speaking of toilets, the bathroom was small and had a tall shower. It may have even been tall enough to pass the TPG shower test. I don't know about Brian, but it was a pass in my book!

I really loved the smell of the soaps and shampoos, which were all part of the Bliss Spa signature collection. They smelled like lemon and sage, yum!

After a long day of chasing birds around the Financial District, I finally laid down in my king bed to watch Animal Planet. Danielle used her opposable thumbs to turn on our 37-inch television, and we both were surprised to see TPG pop up on the screen!

Fortunately, there were a few small bites available for in-room dining. Danielle decided to order a small pot of coffee ($8) and the continental breakfast ($18), which included an assortment of pastries and muffins. After 15 minutes, the tray came to our room.

Later in the evening, Danielle decided to sneak out of the room, as I snored away in bed, to grab a drink at the bar. The bar had happy hour from 5:00pm to 8:00pm, which included $7 beers, $10 wine, $11 mixed drinks and a $12 cocktail of the day. She ordered a cocktail with Espolon tequila, lime juice, cucumber, jalapeño and cilantro. The drink was spicy yet refreshing.

At 9:00pm on a Wednesday night, there were around 15 people hanging at the bar and on the couches. It wasn't too loud, but it sounded like everyone was enjoying themselves. There was a DJ booth at the end of the bar, but given it was the middle of the week, there was no DJ.

At night, the lights on the ceiling reflected off the black floor, creating an optical illusion that made Danielle feel like she'd had a little too much to drink.

Hotel guests and locals alike could stay by the bar or head to the patio, which included a few lounge areas.

There was an outdoor bar, which didn't seem to be open during the week.

At least everyone could enjoy the view, regardless of their room, by sitting out on the patio.

I chose to stay at the W New York - Downtown because I was impressed with the list of pet services offered on the website. I was sold at pet birthday cake!

When we had first arrived in the room, Danielle called down to the concierge to request a dog bed and bowls and to inquire about the dog birthday cake. The woman at the concierge desk said the bed and bowls would be up shortly. She further explained that they did not have the birthday cake right then, but they could definitely get it for me. Danielle responded by saying she would be here for two nights, and that they could get it to her at any point within the next two days.

After waiting almost two hours for the bed and bowls, Danielle called down again and was met with an apology from the concierge and was told that they were on their way. Five minutes later, the bed, two bowls, two rolls of clean-up bags and a bag of milk bones were brought to the room.

The next morning, Danielle called down to the concierge again to get an update on the cake. This time, a different employee answered and was unaware of the first request. She said that they do not keep the cakes on site but send an employee to purchase them from a nearby pet store called Petropolis. The concierge told Danielle that if the cake were needed in a rush, the store was just two blocks away and they'd be happy to pick it up for her. Danielle opted to have the cake delivered.

Later that day, Danielle still hadn't received the cake, so she called down again. This time, they apologized and said it was very busy in the lobby and someone would be up with it shortly. About a half hour later, an adorable little doggie birthday cake was delivered to the room.

The cake was mostly made of apple and peanut butter and was decorated with yogurt frosting made with vegetable coloring. I loved the cake so much! Was it actually my birthday? No, but don't pretend like you've never lied about your birthday at a restaurant for cake!

As excited as I was for my cake, I was a little bummed that I did not receive the special turndown treat that was listed on the website.

In addition to my pet amenities, there were human amenities too! The 24-hour gym was on the third floor. The treadmills had a view of the Freedom Tower.

The gym had your standard workout equipment, yoga mats, exercise balls and a punching bag. The room was air-conditioned to a cool temperature to ensure a comfortable workout.

Danielle and I had a furtastic time at the W New York - Downtown. I am still dreaming of those views from my spot by the window! I felt welcome right away with the milk bones at the entrance and the treats at check-in. It seemed like they had a few staple pet amenities for me (the bed, bowls and treats) on site, but the other amenities and services were outsourced. The W's "Whatever/Whenever" service applies for the pups too, since they had no problem running out to get me my cake! I suggest calling in advance for that cake or any other specific requests, though. Overall, I would recommend this hotel to other pups looking to stay in Lower Manhattan!