Apex Mex: A Review of the W Mexico City 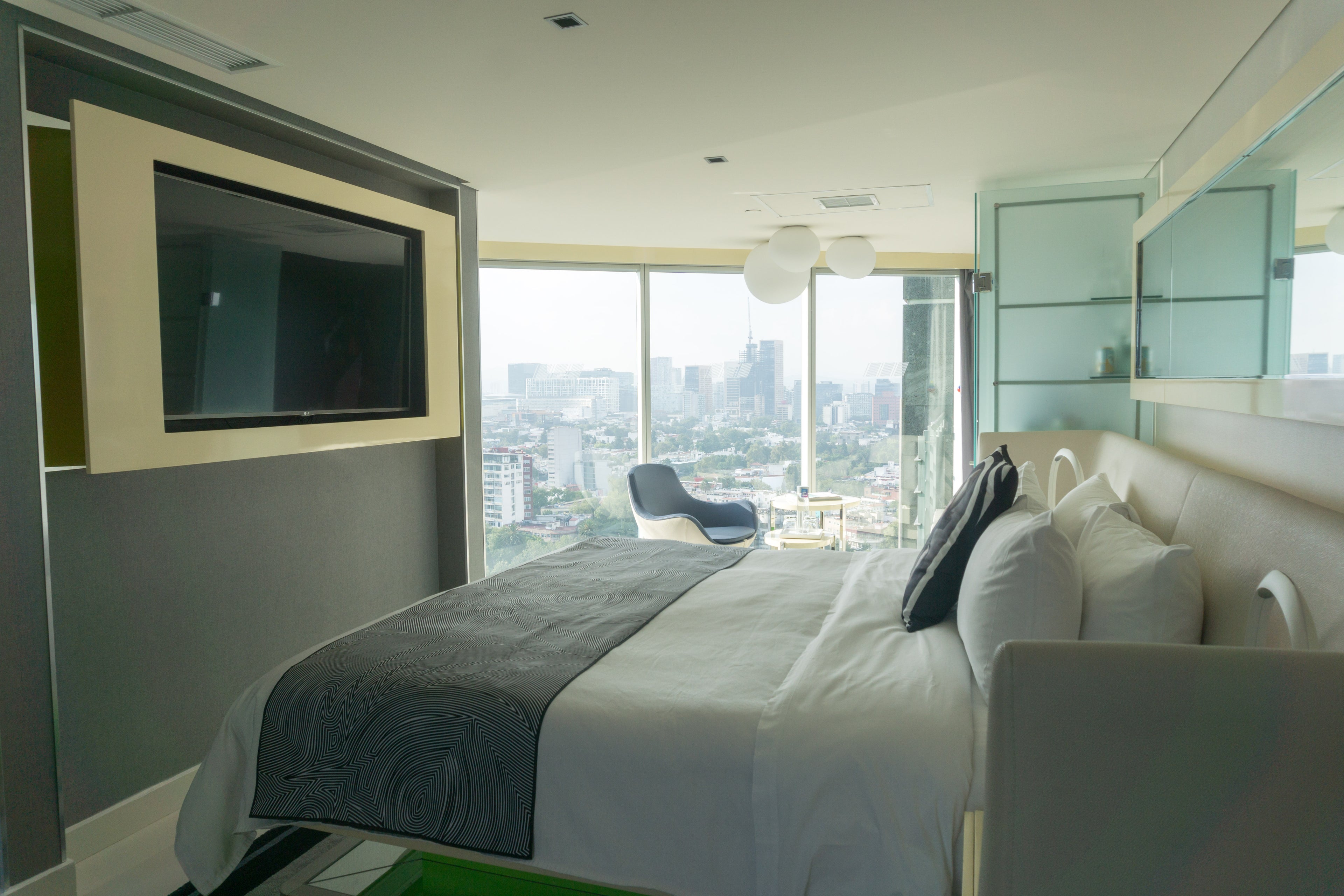 Earlier this fall, I ended up in a city I had always wanted to visit: Mexico City. Since I'm chasing top-tier Marriott status this year I focused my hotel search within its portfolio. When it comes to business trips, I tend to be mildly annoyed by W hotels, with loud DJs spinning in the lobby and sometimes uncomfortable work spaces, but I do usually enjoy them on leisure stays. I landed on the W Mexico City because of a reasonable prepaid cash rate and its location in the leafy Polanco neighborhood of CDMX.

As with many large cities, prices at chain hotels dip during weekends, and Mexico City was no exception. I was tempted to book The St. Regis in town, which was priced around $250 before taxes, but the W's prepaid rate was only $130 plus taxes and fees. For a hotel that was priced around $350 on most weekdays, it seemed like good value. The hotel was a Category 5 hotel and also could have been booked using 35,000 Marriott Reward points.

I booked the cheapest Wonderful King room and applied suite-night upgrades to the two nights. About four days before checking in, I received the exciting upgrade confirmation by email.

I received another confirmation email from the actual hotel stating I was booked into a 538-square-foot Fantastic Suite for my stay.

During my two nights, I earned 3,947 Marriott Rewards points for my stay, which TPG valued at $35 along with 930 Citi ThankYou points from using my Citi Prestige® Card, which is relaunching soon!

The W Mexico City was in the upscale neighborhood of Polanco. The area oozed wealth and was host to many fine-dining restaurants (including Pujol), designer shopping and international embassies. Chapultepec Park, akin to New York's Central Park, was a few minutes away by foot and encompassed a lake and beautiful running paths. The entire neighborhood was gorgeous, extremely safe and a nice way to ease into the city.

I had been in touch with the hotel a few days earlier to let them know we would be arriving on a red-eye flight and had requested early check-in via email. While they couldn't confirm it, they did mention that it should be OK based on current bookings. We arrived at the hotel around 7am, and our room was ready. The agent mentioned that the hotel was more of a business hotel, and while it would have been tough during the week, early check-ins on Friday were slightly easier for the hotel to accommodate.

I chose breakfast as my Platinum amenity, which was served at the restaurant in the hotel, J by Jose Andres. The agent was said we could grab breakfast immediately and skip it another day of our stay if we wanted to. I really appreciated the flexibility.

The lobby itself had an art-house feel, with four seats shaped like face masks as the centerpiece of the check-in area. After five minutes, we were on our way to our room on the 20th floor.

Our Fantastic Suite was at the end of the corridor on the 20th floor. It was more of a studio than a suite, but had ample work space on one side and a seating area close to the window.

The views from the window were beautiful.

There was a small balcony as well, but it could only be accessed by calling a member of staff to temporarily unlock the door. The seating area was a nice place to have a morning cup of coffee and watch the sunrise.

Near the window was a small closet with sliding doors that hosted two bathrobes and an ironing board.

The king bed was comfortable and sported a cool Frida Kahlo decorative pillow that was W-branded on the back.

Each side of the bed had two international outlets, two USB ports, light controls for the entire room and a funky lamp that provided a surprising amount of light. There was also a Bose sound system on one side of the bed and a wireless phone on the other side.

A glass closet hosted the minibar, which was stocked with all types of goodies. There was also a nice Lavazza coffee machine that made Americanos or espressos. The housekeeping staff made sure to refill the coffee pods daily.

The bathroom had two separate small rooms, one for the toilet and one for the bath. The sink was exposed in the middle, connecting the two rooms. I liked the checkered tile pattern and the window in the shower room. Nothing like a foaming bathtub and Mexico City glittering below you.

Overall, the room was really comfortable, with modern furnishing and plenty of natural light. It was the perfect place to rest after a full day of adventuring.

Breakfast was served in J by Jose Andres on the second floor of the hotel. The Platinum breakfast included a choice of made-to-order eggs, juice, coffee and self-service at the buffet. The offerings at the buffet included fresh fruit, yogurt, bread, pastries and antipasti like Iberico ham and salami.

I went a la carte one day and paid about $10 for an order of vegetarian chilaquiles, which were delicious as well.

The service at the restaurant was excellent. One day, my fiancee wasn't feeling well and, without our asking, they brought over a blanket for her. They also provided great recommendations of things to do around the city. While I probably wouldn't pay for the breakfast out of pocket, considering the amount of amazing food in the city, it was a great spread to be included as a bonus.

The Living Room bar in the lobby got lively most nights, and one evening they even hosted an art show. Drink prices were high but comparable to many of the high-end bars in the area.

The gym was on the fourth floor right past the spa. It was equipped with cardio machines, a few weight machines and even a bench press. There were never more than three people in the gym, and it was a pleasant place to get a morning workout in.

Though there was no pool at the hotel, there was a large Jacuzzi available to spa and hotel guests. It looked pretty nice, though we never actually used it during our stay.

Right behind the Jacuzzi was a small bar that offered infused water and an assortment of fruits to guests.

In addition, every morning, the hotel put out a small plate of cookies, coffee, tea, water and soft drinks by the elevator.

The W Mexico City is a funky, modern property located in the affluent Polanco district of CDMX. I loved the Fantastic Suite I was upgraded to, specifically because of the natural light that came in from both sides, the modern furnishings and the view from the bathtub. The facilities and room were also up to the standard expected of the W brand, with a level of customer care that kicked the service up a notch. I would happily stay the hotel again for business or pleasure.

Related stories
Chasing elite status on Alaska Airlines? A flight to California this fall could help
Flights to Auckland starting under $700 round-trip
The ultimate guide to earning elite status with United cards
American Airlines forgot it had landing slots at JFK. Then it lost some of them
Editorial disclaimer: Opinions expressed here are the author’s alone, not those of any bank, credit card issuer, airline or hotel chain, and have not been reviewed, approved or otherwise endorsed by any of these entities.