Feel the LUV: Southwest 737-800 from Oakland, California to Newark 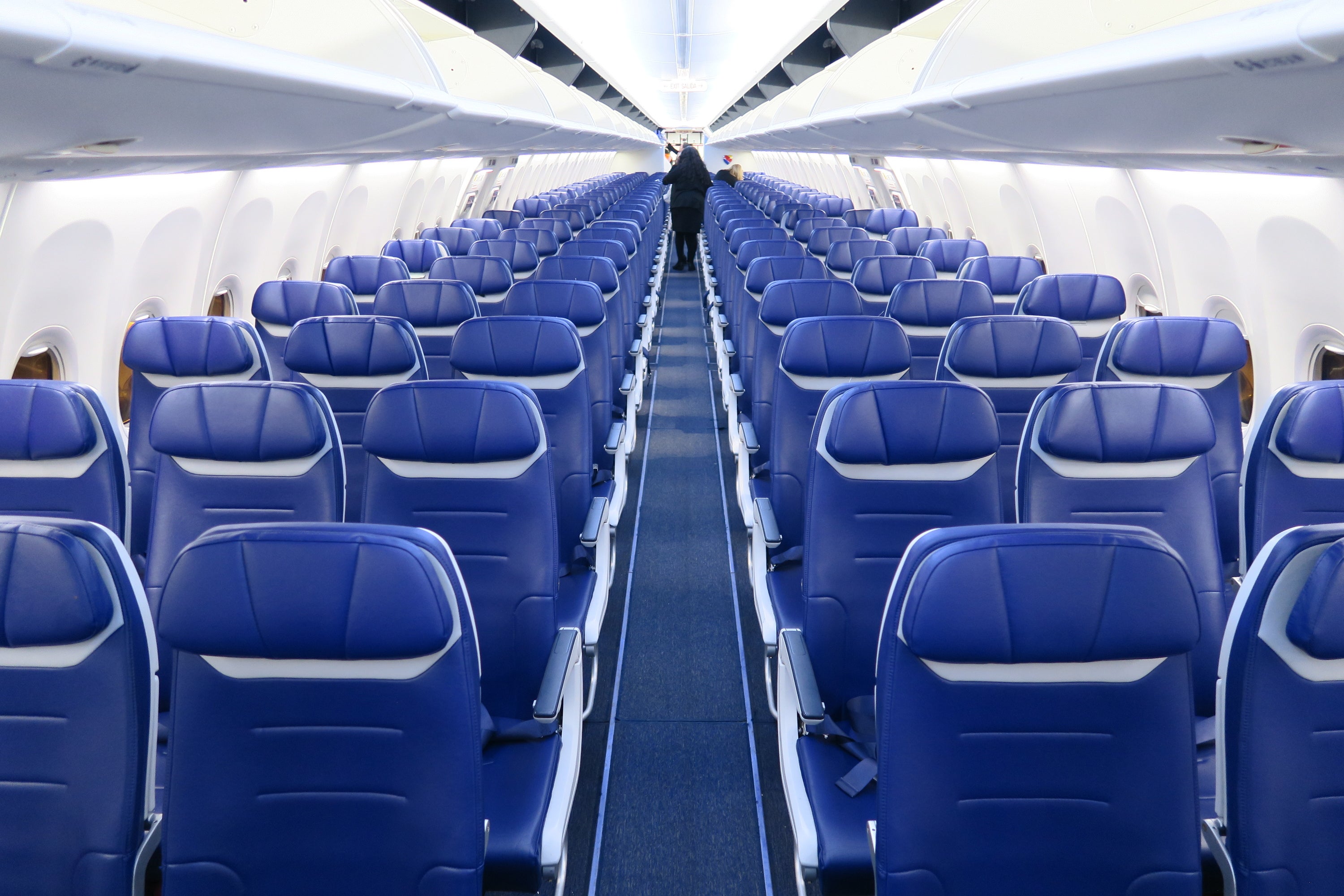 Feel the LUV: Southwest 737-800 from Oakland, California to Newark
This post contains references to products from one or more of our advertisers. We may receive compensation when you click on links to those products. Terms apply to the offers listed on this page. For an explanation of our Advertising Policy, visit this page.

Southwest is a popular airline for many reasons: friendly staff, two free checked bags, no seat assignments, flexible change and cancellation policies and family-friendly lap-child policies. But if you've flown Southwest, you know that Southwest is an interesting combination of low-cost carrier, legacy airline and something completely unique.

Southwest offers one nonstop flight from Oakland, California, to Newark, New Jersey, most days of the week. Here's my experience flying Southwest Airlines on this long transcon route -- one of the longest in the Southwest network.

If you have Southwest points, you'll generally want to use them when booking Southwest flights. In this case, TPG decided to put the $437 fare and $25 EarlyBird check-in fee on The Platinum Card® from American Express. The Platinum Card earns 5 Amex Membership Rewards points per dollar spent on airfare, which provides a 9% return, based on TPG's latest valuations.

If I'd booked my own flight, I would've used the Southwest points I earned from signing up for the Southwest Rapid Rewards Premier Credit Card. And I would've used my Chase Sapphire Reserve to pay the taxes and fees on the award so I'd be covered by the card's excellent travel protections.

Southwest occupied all of Terminal 2 at Oakland (OAK). There were two large check-in areas with kiosks as well as a staffed full-service check-in area on the far right.

I used a check-in kiosk to get a bag tag and boarding pass. AvGeeks who save their boarding passes will be glad to know that the kiosks print out boarding passes on card stock, not on flimsy glossy paper. I needed to tag my own bag, but there were instructions on the kiosk as well as on the bag tag. It took just a few minutes from entering the airport to dropping my bag at the bag drop.

At 8:30am, the flight's departure time was changed from 9:20am to 10am due to a "control delay" at EWR. At this point, as well as in two subsequent announcements, it was announced that the boarding time would be "around 9:30am." Preboarding began shortly before 9:30am.

With A44, I could've grabbed an exit-row seat. But, since I wanted to get a takeoff video with minimal wing in my shot, I claimed a window seat near the back of the aircraft. We pushed back from the gate at 10am.

Southwest's 737-800 had 30 rows of 3-3 seating. There weren't any business- or first-class seats, so all passengers could claim any open seat when they boarded.

The seats were slimline, but my seat (27F) was relatively comfortable for the transcontinental flight.

Each seat had a headrest with bendable wings that could be raised to support taller passengers' heads.

The seat pitch was 32 inches when both seats were upright. My window seat was 17.75 inches wide.

Seats only reclined 2.5 inches, so the pitch decreased only to 29.5 inches when the passenger ahead reclined.

Each seat had a fold-down tray table that could extend forward 3 inches.

It was comfortable to work on my laptop on the tray table.

Below the tray table was an empty mesh seatback pocket. This pocket could easily hold cameras, cellphones, tablets and books.

Above the tray table was a literature holder for the safety card, Southwest magazine and other informational material.

Under the seats, nothing blocked legroom or storage, since there was no power or IFE box. All seats had similar under-seat storage, although aisle seats seemed to have slightly less space.

This aircraft was delivered to Southwest new in July 2017. So I was happy to find the cabin and seats were clean and in good condition. I saw no trash from previous passengers, and the floorboards appeared freshly vacuumed.

No pillows or blankets were provided. Headphones also weren't proactively offered, but flight attendants had earbuds that they gave to passengers who asked. There wasn't any seatback or overhead entertainment, though.

An entertainment library was available for free on your own device even if you didn't purchase Wi-Fi. To reach the entertainment, connect to the onboard Wi-Fi network and go to southwestwifi.com.

Once on this screen was some content available on any Wi-Fi-enabled device and other content only available with select browsers (like the Southwest app or the AirPlayer app). I was able to watch all types of content on my laptop without installing any special software, though.

A large variety of content was available, including 16 live TV channels. These channels were mostly news and sports channels.

There were also 21 TV series, most of which had two episodes available.

There was also a selection of 36 movies.

And there was a large variety of music, crossword and Sudoku programs and a flight tracker with a map and information.

The content streamed very quickly to my device, and the quality was clear. The streaming was better quality than in most hotels.

Wi-Fi was available for $8 a day, or free if you were an A-List Preferred Member.

The Wi-Fi quality was decent with 10.1 Mbps download. The upload measured as 0.1 Mbps, but I believe the upload speed was better than it tested.

The only problem I experienced with the Wi-Fi was that my phone disconnected a few times. Each time I noticed it disconnected, I also noticed that it took a while to reconnect due to a seemingly overloaded network.

There weren't any USB or power outlets on board. So make sure your devices are fully charged and bring a power bank, if needed.

I asked a gate agent before boarding began whether any food would be available for purchase on board. She said no and encouraged me to buy something to bring aboard.

Flight attendants passed through the cabin 25 minutes after departure to take drink orders and then again 15 minutes later with large cardboard boxes of snacks. For this flight, the snack choices were: cheese crackers, Fritos, Oreos and pretzels.

Passengers could have as many of these snacks as they wanted throughout the flight. Turbulence required the flight attendants to be seated for about an hour in the middle of drink service, so my drink wasn't delivered until almost two hours after takeoff.

Flight attendants frequently passed through the cabin throughout the rest of the flight, checking in on customers and offering additional drinks and snacks.

Southwest is known for its friendly service. From the bag-drop guy to the desk agents to the boarding agent to the flight attendants, everyone was friendly. The flight attendants on this flight weren't just friendly, though. They also ensured all baggage was properly stowed, which although required is often overlooked on other airlines. And they individually approached each family with children and reminded the parents to put on their oxygen mask first before helping their children.

Unlike many flights where the flight attendants disappear or sit in the galley and read on a flight of this length, the Southwest flight attendants walked through the cabin frequently to check on passengers and provide additional drinks and snacks. When a family a few rows ahead of me rang the call button, a flight attendant reached their row within five seconds.

Although Southwest is excellent for flexible travelers like me due to its friendly change and cancellation policies, I've admittedly not flown Southwest much recently. After this flight, I'll consider flying Southwest more frequently. The 32-inch seat pitch and limited recline allowed me to work comfortably during the flight, and the flight attendants were the friendliest I've encountered recently — including on some business-class flights.

The main downsides on this flight were no power, no seatback entertainment and no buy-on-board meals — but all of these downsides can be managed if you plan ahead. And, yes, $437 is expensive for a one-way flight from the San Francisco Bay area to the New York area. But this was the going price for one-way tickets on the day I needed to fly, so Southwest wasn't any more expensive than my other options — and at least I didn't have to pay any checked bag fees on Southwest.

Related stories
Bask Bank raises the mileage earning rate on its AAdvantage savings account — what you need to know
Targeted Premier 1K members eligible for bonus miles when checking in and checking a bag on the United app
Current airline elite status match and challenge options you should know about
Business-class deals are back: This month’s Flying Blue promo awards
Featured image by JT Genter