A plane of my own: A review of Singapore Airlines' Boeing 777-200 in business class from Singapore to Hong Kong 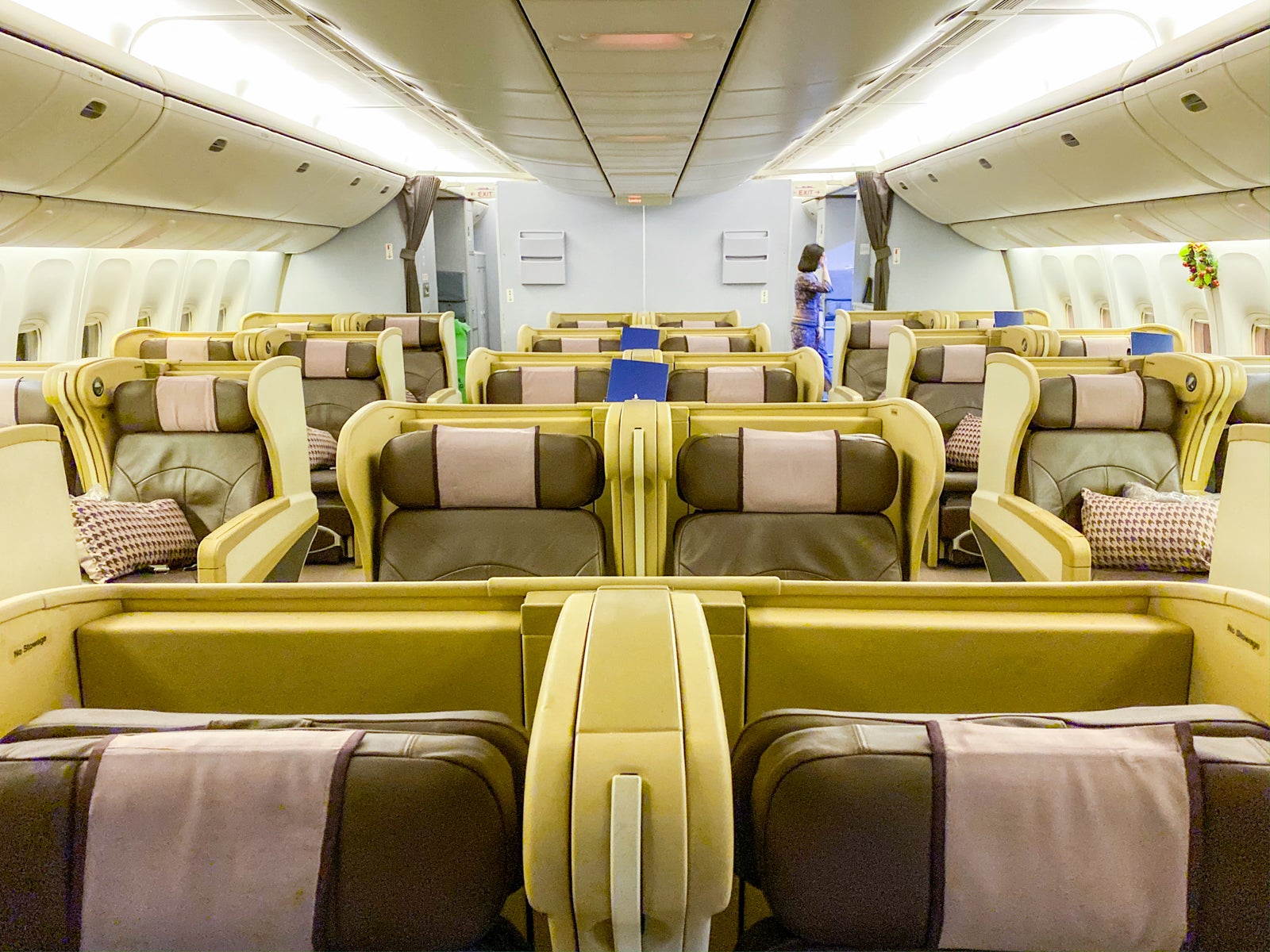 A plane of my own: A review of Singapore Airlines' Boeing 777-200 in business class from Singapore to Hong Kong
This post contains references to products from one or more of our advertisers. We may receive compensation when you click on links to those products. Terms apply to the offers listed on this page. For an explanation of our Advertising Policy, visit this page.

Intra-Asia flying is some of the best in the world. You’re often treated to really comfortable wide-body planes on routes less than four hours. For instance, Cathay Pacific and Singapore Airlines only operate wide-body fleets, so you’re guaranteed a jumbo jet for any flying you do with those carriers.

In my case, I needed to get home from Singapore and found a really good paid business-class fare from Hong Kong (HKG) to the U.S. To get from Singapore (SIN) to Hong Kong, I booked a flight with Singapore Airlines aboard one of the carrier’s aging Boeing 777-200s in a regional configuration. After my flight, it’s safe to say that Singapore definitely doesn’t win any of its awards based on flights aboard the 777-200.

In this case, my flight was only available through either Singapore KrisFlyer or Alaska Mileage Plan. KrisFlyer wanted 30,500 miles, whereas Alaska only wanted 25,000 miles and $50.

Every journey that begins at Singapore Changi Airport is a good one. The airport is consistently rated one of the best airports in the world, thanks to its passenger-friendly facilities and overall efficiency.

I spent some time at the Jewel before heading to Terminal 2 to check in for my flight. Business-class passengers had a dedicated check-in row, which was totally empty when I got there a few hours before my flight.

I already had my boarding pass, but I nonetheless asked an agent to check me in for the full experience. The agent was friendly, reconfirmed my seat assignment and sent me on my way through immigration.

Unlike other airports, security at Changi is at individual gates. To get airside, all you need to do is clear immigration. It didn’t take me long to clear immigration, and I then headed to the Terminal 3 SilverKris lounge, near the A gates in Terminal 3.

I ended up sitting down at a long co-working table.

The lounge’s drinks were all self-serve, and there was a respectable collection of liquors.

The buffet was near the center of the lounge and featured regionally inspired dishes. There were multiple Indian dishes like fish curry, onion pakora, aloo bonda and paneer lazeez.

There were a few other dishes like roasted pumpkin, stir-fried mushrooms, beef in black pepper sauce and roasted Cajun chicken.

There was also a salad bar, but nothing looked particularly appetizing. The best part of the lounge was the frozen yogurt and pancake machine. (And, yes, they had maple syrup).

The lounge’s bathrooms had a few showers, but they were all occupied. Since the lounge was so crowded, I walked around the terminal instead.

Before long, it was time to head to the gate. Security was quick, and I then had my boarding pass scanned to enter the secure seating area.

Boarding was efficient and began with biz passengers invited to preboard.

While the Changi Airport itself was impressive, the SilverKris lounge was definitely disappointing. It was way overcrowded, and none of the food was particularly appetizing. I can't wait for Singapore's lounge renovations to be completed, as I'm sure the new lounges will have more space for all the business passengers passing through Changi.

Singapore’s old regional business class was in a 2-2-2 configuration. The seats were angle-flat and reclined to 172 degrees.

I didn’t have a seatmate during my flight, but if you’re on a crowded flight, I’d definitely recommend a bulkhead seat, as you’ll have almost limitless legroom and easy egress in the middle of the flight.

There was a small privacy partition that could be extended to provide some sense of personal space.

Singapore was definitely feeling the holiday spirit, as there were a bunch of wreaths hanging around the cabin.

The seat controls were in the armrest and easy to use.

Unlike with some other angle-flat seats, I had trouble getting comfortable once I put the seat in bed mode. The seats had both a footrest and a legrest, but I still couldn’t find a comfortable sleeping position.

Another issue with these angle-flat seats was the lack of storage space. Aside from the small cubbies underneath the TV and exposed shelves under the armrest, there wasn’t much room for personal belongings.

The overhead bins were large enough to fit all my carry-on bags, since nothing could be stored under the seat in front of me.

I found the 19-inch-long and 12-inch-wide tray table to be large enough to eat and work comfortably. The tray table didn’t swivel, but it did move back and forth to make it easier to get out of the seat during meals.

The business-class cabin had three standard-size restrooms, and each had linen towels and Penhaligon's hand cream, eau du toilette and facial mist.

Singapore excelled at the inflight-entertainment content, but fell short just about everywhere else.

The personal TV monitor measured 15 inches, but the resolution was quite poor. Not only was the resolution bad, but the navigation experience needed work. The screen wasn’t touchscreen, so you needed to use the remote to navigate the confusing menus.

Singapore is actively upgrading the KrisWorld entertainment system to bring it up to today’s standard, though.

KrisWorld had over 300 movies and 700 TV shows. Of the 300 movies, about 20% of them were new releases like "The Lion King," "Once Upon a Time in Hollywood" and "Toy Story 4." If you’re a frequent traveler, you’ll be thrilled to learn that Singapore rotates many of its movies every month. In November, Singapore offered 79 new movies on board.

Aside from random TV episodes, there were 49 full seasons of TV shows, including HBO classics like "Big Little Lies" and "Game of Thrones," as well as dramas like "Billions" and "This Is Us."

With all the content preloaded on KrisWorld, I didn’t miss the live TV or tailcam that were absent. (Well, I’m an AvGeek and will always miss a tailcam). The moving map was also pretty basic and wasn’t customizable.

The provided active-noise-canceling headphones were just fine, though I’d definitely recommend bringing your own.

Aside from the pillow and blanket waiting at my seat during boarding, there was nothing else by way of amenities. Singapore doesn’t distribute amenity kits to business-class passengers. If you wanted amenities like a toothbrush or face mask, you needed to ask the cabin crew.

Singapore doesn’t offer Wi-Fi on the Boeing 777-200s, but the flight wasn’t long enough that it made much of a difference. At least there was an AC outlet for charging my devices.

While some U.S. airlines barely manage to serve a meal on a flight under four hours, Singapore Airlines does the exact opposite. They went all out with the dinner service on my flight.

Once we were about 15 minutes into the flight, the crew asked for my drink choice (naturally a Singapore sling) and meal preference.

Singapore lets premium cabin passenger select their entree up to 24 hours before the flight. You can choose from the inflight menu or choose the Book the Cook program, which features over 45 off-menu entrees. On this flight, I booked the cook for pan-fried sea bass with vegetable stew.

All passengers were served the same gravlax starter with lettuce and salmon roe. The dish was quite refreshing and got me excited for my seafood entree.

The entree was served about an hour after takeoff, and it was scrumptious. The fish fell right off the skin and was incredibly tasty for an airplane meal.

I was stuffed after finishing the main (and a few too many pieces of Singapore’s famous garlic bread), so I skipped cheese and the coconut dessert.

Although I kept ... slinging ... back Singapore slings, there were plenty of other available drinks, including white and red wines and a full list of cocktails, mocktails, teas and coffees.

Overall, I was so impressed with the food and beverage on this flight. Every dish I tried was delicious and certainly put U.S. carriers to shame.

I’ve only ever had an empty cabin once in my life. That was flying Singapore Suites from Frankfurt (FRA) to New York-JFK. That was incredible, and this flight from Singapore to Hong Kong felt like déjà vu.

I was seated in the rear minicabin, and there was only one other passenger in it (there were a few others in the main business-class cabin). Although Singapore Airlines service is already quite attentive, I’ve never been so cared for as a business-class passenger as I was on this flight.

Every time one flight attendant left my seat, another came by asking if there were anything they could do for me. And I wasn’t just escorted to my seat when I boarded the plane. The flight attendant opened the overhead bin and stored my bag for me. Throughout the flight, I was addressed by last name.

If I had to nitpick, the one very minor complaint was that meal service was all done via trays, as opposed to placing the dishes directly on the tray table. Otherwise, this flight perfectly exemplified why Singapore Airlines wins so many awards for inflight service.

Singapore Airlines is known for its award-winning passenger experience. On my flight from Singapore to Hong Kong, I witnessed firsthand some of the best service I’ve ever seen in business class. I was also impressed with the excellent meal and drink service.

However, Singapore dropped the ball when it came to the seat. Angled-flat seats are simply uncompetitive, and the IFE system was outdated. (Both are getting updated soon).

So while this particular flight wasn’t necessarily indicative of the hard product you’d receive on a long-haul flight with Singapore Airlines, they nailed all the soft elements. Had I flown on another Singapore plane with a cutting-edge hard product, it’d be easy to imagine Singapore Airlines as the best overall airline in the world.

Related stories
20 must-have cruise items — including a roll of duct tape
Chase Sapphire Preferred vs. Chase Sapphire Reserve insurance benefits – Which is better?
The complete guide to the Expedia Rewards loyalty program
Not as simple as it seems: How to use JetBlue Travel Bank
Featured image by (Photo by Zach Griff/The Points Guy)