What Waffle House can teach airlines about service 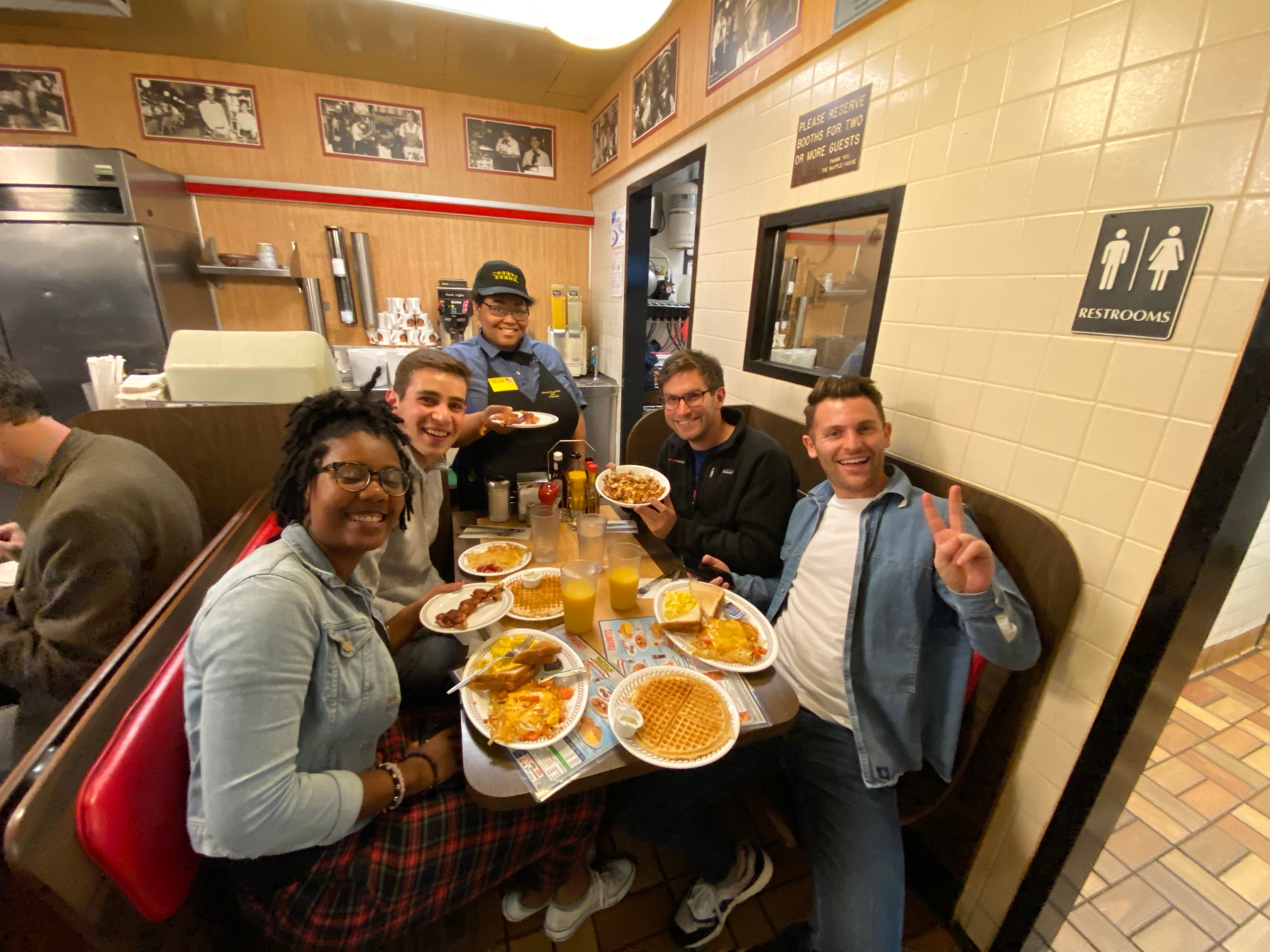 What Waffle House can teach airlines about service
This post contains references to products from one or more of our advertisers. We may receive compensation when you click on links to those products. Terms apply to the offers listed on this page. For an explanation of our Advertising Policy, visit this page.

I wasn’t expecting to write an article about a team dinner I had last week at the Waffle House in Pineville, North Carolina. But what I experienced in Waffle House #1157 may just go down as the best service interaction I’ve ever had. This was only my second-ever visit to an outpost of the suburban Atlanta-based chain, and you can tell from our faces that we were happy customers.

I was quite hungry last Wednesday night, so I was really excited to dig into my All-Star Special. I grabbed my fork and knife and began cutting into my waffle, but then it hit me— there was no maple syrup on the table. To me, waffles (and pancakes) taste best when swimming in a pool of maple syrup, so I was somewhat disappointed.

I quickly put down my utensils and asked my colleagues if they’d seen any maple syrup at the restaurant. Sadly, they hadn’t. Instead of giving up, I asked a nearby employee if they had any maple syrup. His response was nothing short of amazing.

The employee, Ron, profusely apologized that Waffle House doesn’t carry maple syrup. He paused, and then politely explained that his passion is making sure customers leave happy. So, he asked, would I mind waiting a few minutes while he went to a nearby Walmart to buy a bottle of maple syrup?

I was so dumbstruck by the question that I didn’t know how to respond. The cynic in me thought that perhaps he was being just a tad sarcastic, but either way, I replied yes. Nine minutes later, Ron was grinning cheerfully when he delivered a bottle of Maple Grove Farms maple syrup to my table. We thanked him and his team profusely, both verbally and later in the form of tipping, and finished our delicious dinner.

On the way back to the hotel, I couldn’t help but compare my interaction with Ron to what I’m used to experiencing when flying across the country and around the world. When flying, I often feel like I’m inconveniencing the flight attendants by asking for a full can of soda or extra bag of pretzels.

There are certainly plenty of airline employees going above and beyond for passengers every day. Sadly, there aren't enough of them. That's why airlines routinely end up at the bottom of customer satisfaction surveys along with cable companies, cell phone provides and car rental shops.

At the Waffle House, my request wasn’t met with a curt “no” or apathetic apology. Instead, Ron displayed the sincerest Southern hospitality I’ve ever seen. He took matters into his own hands to make sure I left the diner completely satisfied with my meal.

Airlines should learn from my dinner at the Waffle House. (And I don’t just mean by preparing tasty food). Like Ron, front-line personnel should adopt a customer-centric perspective to service. It starts with adopting a friendly and courteous tone when interacting with passengers. When passengers have special requests, it means going the extra mile to make them feel heard and understood.

Delivering hospitality all the time isn’t the only thing airlines can learn from the Waffle House. The diner did a great job at bundling the things we wanted. The menu was easy to read and included discounts for adding on waffles or hash browns. Wouldn’t it be great if airlines got better at bundling? Why can’t U.S. airlines offer an “early riser” breakfast box special with a $3 up-charge for a Bloody Mary?

On the way out of Waffle House, we saw a sign with the house rules. With tight booths and limited space, posting the rules gets diners to self-police. Maybe it’s time for airlines to do the same.

At TPG, we recently partnered with Passenger Shaming to expose some of the worst behaviors we’ve seen from passengers. Why can’t airlines post some rules around not putting bare feet up on others' seats, armrest etiquette and what to do when you see spmeone struggle with storing their carry-on bag?

Just like many airlines, Waffle House isn’t fancy. Diners and passengers are packed into tiny booths with little legroom. There are no TVs or free newspapers at the Waffle House or on most planes. The difference, however, is that at the Waffle House, service is about the customer. On the other hand, service in airports and in airplanes is often just about going through the motions, regardless of the passenger's feelings or wishes.

Although you're probably not going to find any maple syrup on a metal tube flying through the sky — nor, of course, employees willing to step outside to fetch some — it doesn't cost anything extra for airlines to offer service like the Waffle House. They should learn from the example that Ron set last week and work to adopt a culture built around hospitality. Until then, I'll keep going back to Waffle House to admire their great service.