We Heart WeHo: A Review of the Kimpton La Peer in Los Angeles 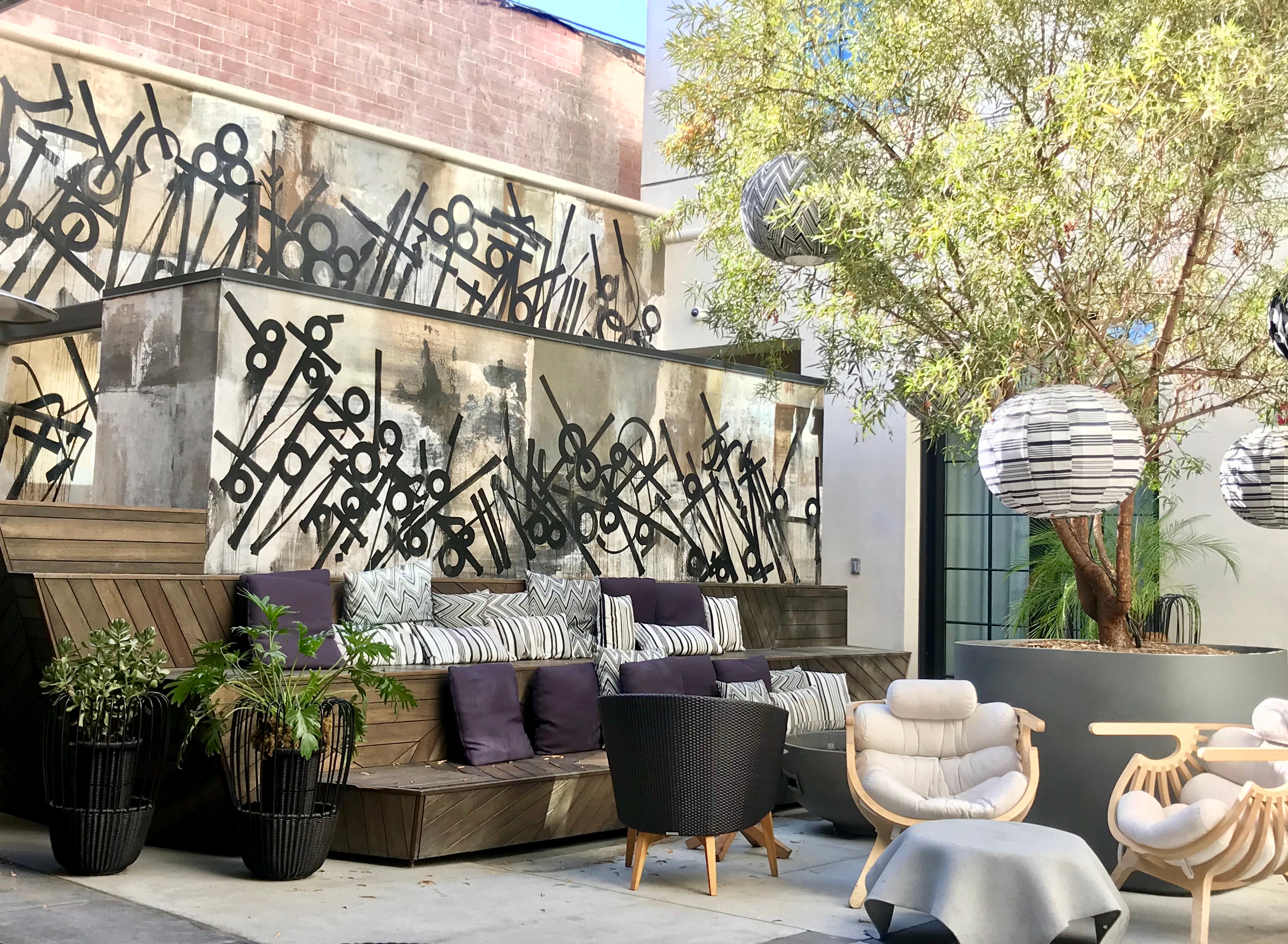 Less than a year old, Kimpton La Peer is a welcome addition to the Los Angeles hotel scene. Its slick, modern décor, fantastic food and beverage options and plush rooms make it a little oasis in the hustle and bustle of West Hollywood.

A friend and I needed a last-minute hotel room in LA for a few nights (as in booked the same morning as I arrived in LA) and turned to my new go-to app, Hotel Tonight. I love its easy-to-use interface, search features, reviews and, of course, the discounts. The winner this time was Kimpton. The hotel was labeled "luxe" and had a 98% approval rating after 59 ratings from Hotel Tonight users, which was more than solid.

For my stay, the rate on Hotel Tonight was $341 per night for two nights, down from the La Peer's rate of $405, a roughly 15% discount. After just a few clicks, I was all set. I paid for the $682 stay with the Chase Sapphire Reserve card, which allowed me to earn 3x points on my purchase — in this case a total of 2,046 Ultimate Rewards points, which are worth about $41 according to TPG's latest valuations.

The hotel was about an hour from LAX by car in heavy traffic. It's located smack in the heart of West Hollywood and within walking distance of the cornucopia of gay bars, restaurants and shops that line Santa Monica Boulevard and Melrose Avenue. The Abbey, Zinqué, Fiesta Cantina, Mickey's, Gracias Madre, Tortilla Republic — they were all within a five-minute walk of the Kimpton La Peer, which was special because LA really isn't a walking city. When you think LA, you think Uber. And yet, when you're sitting by the pool sipping rosé, it feels like you're in your own little oasis. Location-wise, if you're looking to stay in WeHo, this is the place to be.

We checked in around 1:00pm, two hours before the official check-in time. Although there was a problem finding my reservation, once I told the agent that I had booked it on Hotel Tonight that same morning, he found it. Hans kindly explained that there were rooms available and ready, but that he needed 10 minutes or so to get my reservation properly uploaded in the system. He added that we were welcome to sit down and enjoy one of their welcome cocktails. Um, yes, please!

The only other question we had to answer was, "Red or white?" We were promptly brought two white-wine spritzer-like cocktails that were the perfect answer to the searing 90-degree heat outside. Not even five minutes later, a staff member came up, addressed us both by name and informed us that our room was ready and the bags had already been sent up. Stunning!

I LOVED my room at the Kimpton, though the first thing that caught my attention was actually the bathroom.

The bathroom was stocked with Atelier Bloem amenities, which left us smelling delightfully herbal and feeling fabulous after every shower. And for those who want to splish-splash in style and make good use of the tub, there was a Bath Rituals by Ole Henriksen Spa menu — basically bubble baths on demand! Yes, I made good use of it and ordered the divine Signature La Peer bath. And no, I won't be posting any pictures of said bath.

Across from the bathroom was the well-stocked closet, which had all the mod cons and then some: a full-sized umbrella, plush bathrobes, slippers, plenty of hangers (not always the case in hotels!), iron and ironing board and even a yoga mat! And there was definitely enough space in the room to do yoga, if that's what you felt like doing.

The room itself was as beautifully designed as the rest of the hotel, although with less color than the lobby, which lent a sense of calm and understated elegance to the room. The design had a distinctly Scandinavian feel to it, with dashes of Hollywood exuberance, like the Jeff Koons-inspired golden balloon rabbit next to the bed. Signature contemporary lighting allowed guests to adjust the lights to fit any mood.

The long, low furniture stretching out from the walls coupled with the restful monochromatic palette gave the room a warm, welcoming feeling. There was a wall-mounted flat-screen TV and a king bed I could have easily stayed in all day, and the rabbit lent whimsy and humor to an otherwise tranquil space. What was particularly striking was the lack of clutter one often finds in hotel rooms. The open design felt refreshing and welcoming.

As one would expect in a recently opened hotel, there were outlets and USB chargers everywhere, not only on the desk but on both sides of the bed. The custom workstation was a welcome touch, and while I'm sure people use it to do work-esque tasks such as pop off an email or two, we found it worked just as well as a perch for a well-chilled bottle of Sauv Blanc and a staging area for picking out the evening's outfit.

The restaurant at the Kimpton La Peer, Viale dei Romani, was billed as a "modern West Hollywood trattoria." It served breakfast, lunch and dinner and provided the catering for the Courtyard Bar by the pool. Putting aside the traditional definition of a trattoria (somewhere where the service is casual, the food and wine are cheap and the wine is della casa and served in carafes — all of which were not the case here), the chef came up with a rather tasty concept. The menus were a mix of traditional Italian and Southern California flair, with something for everyone. I'll be honest: We never made it down in time for breakfast, but they did provide freshly brewed coffee when we did finally stroll down around 11:00am each morning.

We did, however, put the Courtyard Bar to the test. The bar menu included delicious pizzas, ranging from classics like the margherita (for a whopping $25) to the Ipswich clam pizza. While the pizza was delicious, it didn't teach me Italian and take me for a Vespa ride a la "Roman Holiday," which at $25 for a small, a pizza frankly should do.

Happy Hour at the pool was much more reasonable (beer for $4, wine and cocktails for $10). The rosé sangria was delicious, the truffle fries were everything you'd expect from truffle fries and then some, and the calamari were done to perfection, not the typical breaded gummy bears one usually is served.

The shining star in this category was definitely the hotel's pool. We spent two afternoons poolside, enjoying the peace and quiet of the pool and the fabulous service. We loved the direct sunlight that the pool area enjoyed most of the day, but if shade is your game, there were fully covered cabanas at your disposal too. The full Courtyard Bar menu was available poolside, which was a huge bonus, and our bartender gladly provided us with ice buckets to keep our sparkling wine nice and cool while we soaked up the sun.

The Courtyard Bar just next to the pool was another favorite spot. In contrast to the quiet calm of the rooms, the walls here were decorated with enthusiastic graffiti-like designs that gave the space energy. There were pillows and lounge chairs of all shapes and sizes, inviting guests to come in and take a seat. In the afternoon, it was the perfect spot to cozy up with a book, but from happy hour into the late evening, it became a happening gathering spot for the in-crowd in West Hollywood.

The gym was just behind the pool and was small but well-equipped. The La Peer would even arrange for a personal trainer to join you at the gym, if that's your idea of a restful vacation.

In addition to the pool lounge, there was an impressive rooftop space that had commanding views of the Hollywood Hills and Downtown. Both times we went up there, however, the space was completely empty. A shame, really. In the searing heat of the day, I could see how it might not be so inviting, but I was surprised it wasn't being put to better use at night.

Overall, we loved our stay at the Kimpton La Peer. The room was nothing short of spectacular, as was the service. The gentleman who handled our check-in, Hans, addressed us by name throughout our stay, as did our bartender in the courtyard, Marley. Everyone at the Kimpton seemed to remember who we were and genuinely care about how we were doing. It was refreshing and something that is really only achievable in a property of this scale.

Honestly, there were only two downsides. The prices of some amenities were a little steep, particularly parking (at $49 per day) and the food. The parking prices were posted on a tiny little sign by the valet booth that we didn't even see until our last day. I know, my bad for not asking about the rate or if parking was included in the room rate, but nonetheless it seemed excessive.

Two, our room overlooked the pool, which was lovely, but the Courtyard Bar definitely got loud in the evenings. It wasn't horrendous nor did it go on into the wee hours of the morning, but if you're the early-to-bed type, you might want a room on the front side of the property.

The Kimpton La Peer is absolutely a welcome addition to the West Hollywood hotel scene. The phenomenally decorated and designed rooms, coupled with the kind of service that one associates with Singapore Airlines make this a hotel that I absolutely plan to return to next time I'm in LA.