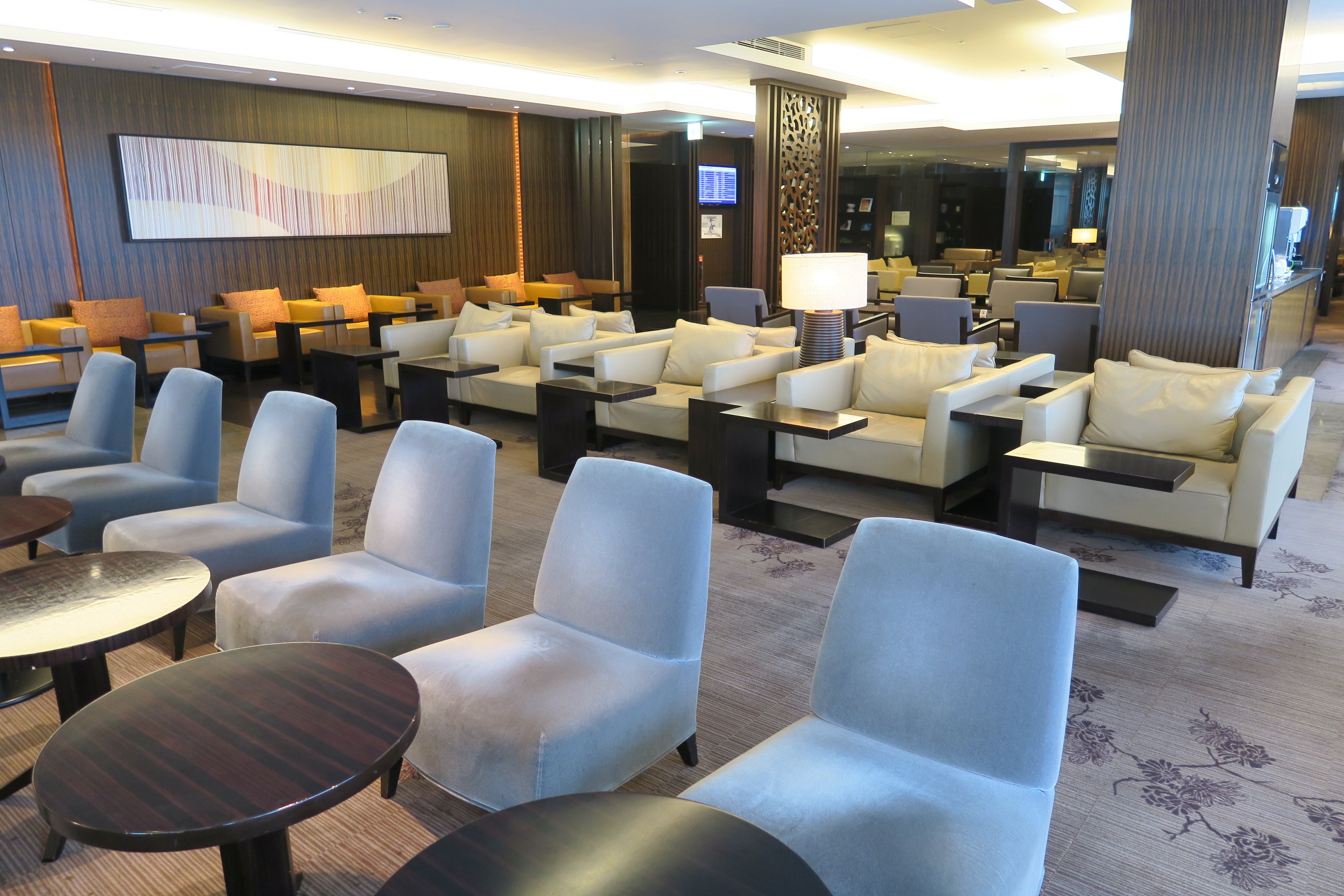 There are only a few airport lounges that I'll purposefully build-in a long layover so I can spend extra time in the lounge. One of these lounges is the JAL First Class Lounge. I've visited this lounge many times before and although it lacks some features you might expect in a First Class lounge, it's still one of my favorite lounges in the world. Here's my take on the JAL First Class Lounge in Terminal 2's Main Building during a nine hour layover before flying to New York JFK in JAL Premium Economy.

The JAL First Class Lounge is in Tokyo Narita's (NRT) Terminal 2 Main Building. If you're originating at NRT, go right after exiting immigration and you'll see the lounge on your left shortly before the departure gates begin.

If you're connecting from JAL or most Oneworld partners, you'll likely arrive in Terminal 2. So, clear transfer security and take the escalator up one level. Then determine if you arrived into the Main Building or Satellite Building. If you arrived into the Satellite Building, you'll need to walk to the Main Building. The lounge is open daily from 7:30am to 10pm.

The JAL Sakura Lounge for Business Class passengers and the JAL First Class Lounge share one entrance door and desk in the Main Building. I simply presented my boarding pass, which showed my Oneworld Emerald status, and was shown to a secondary First Class Lounge entrance desk on the left-hand side of the main desk.

Once past the entrance desks, you'll walk down a hallway into the lounge. As you walk down the hallway you'll see a desk for booking private shower rooms and massage chair rooms as well as a self-service luggage room. Keep walking and you'll reach the main lounge room.

If you turn to the left, you'll see a hallway to the left. This hallway leads to phone rooms and restrooms.

Walking onward in the lounge you'll see a working nook on the left. This nook has desks, a computer and a printer. I sat at one of the individual desks for much of my stay and found the chair and desk to be comfortable for working. Each desk has at least one outlet that accepts grounded three-prong US plugs.

After the first working nook there's a second working nook with more desks and computers as well as two electronic massage chairs.

After leaving the second working nook, you're at the far end of the lounge. There's an enclosed smoking room here, so if you sit in this area you might occasionally catch a whiff of smoke.

To the right of the smoking lounge is a staffed shoe polishing desk that's operated in collaboration with British shoemaker John Lobb.

Walking back through the lounge you'll see the dining area and windows that overlook the apron. Oftentimes, the landing patterns allow you to watch planes right before they land.

In the dining area, there's a sushi bar, sake bar, food buffet, snack area and drinks area. There's also a modest number of two-seat tables for dining, although these tables can become difficult to snag during peak times.

Quiet, peaceful music plays overhead. The lounge can get quite loud when it's near capacity though.

On the counter is a hair dryer, brush, cotton swab and shower cap. A tooth brush and tooth paste, razor and drinking cup are available from the shower attendant. There are two hangers, two hooks and plenty of places to put your luggage off the floor.

There's shampoo, conditioner and soap in the shower. The floor of the shower is made of an anti-slip material, so there's no fear of falling.

This lounge used to offer massages by massage therapists before this benefit was removed in October 2017. Now, the old massage rooms have electronic massaging chairs that passengers can use.

In the working nooks, there are a few computers available. There's also an industrial office printer and scanner that passengers can use.

Various English and Japanese magazines are available on shelves near where the windows begin in the lounge.

Newspapers, mostly in Japanese, are available on a second set of shelves near the dining room.

The lounge's Wi-Fi is easy to access and reasonably fast. A speed test in the morning showed 16.93 Mbps download and 9.55 Mbps upload.

My favorite part of the JAL First Class Lounge is the staffed sushi bar that's open from 7:30am to 12:30pm and 3pm to 8pm daily. The sushi is served as a three-piece set and the menu -- which is available online (PDF file) -- rotates weekly. During my visit, the menu consisted of Maguro (Tenmi) Tuna, Octopus and Rolled Egg. I'd recommend trying the three-piece set as it is served initially. But, know that you can get three pieces of your favorite sushi if you ask.

I enjoy the fresh sushi so much that I usually don't eat much, if anything, from the food buffet. But, if you want more variety, there is an entire buffet of hot and cold options, and there are different options for breakfast than for the rest of the day.

There are ingredients for making your own salad.

There are three types of soup available from Tokyo Soup Stock.

There are also two hot dishes. For breakfast, these dishes contained scrambled eggs, sausage and potatoes.

Finally, there are little dessert bites.

Near the sushi bar is a self-serve sake bar. The bar has three different types of sake, so you can host your own sake tasting if you wish.

Next to the food buffet is a area with wines, liquors and snacks. Sodas, fruit juices and cold beer glasses are available in a refrigerator.

There are a few different types of wine. A handwritten sign notes the current selection.

The liquor selection isn't extensive, but adequate and nicely presented.

There are multiple beer pouring machines.

There's also a smaller drink bar, including coffee, beer machines and a refrigerator with juices and sodas, in the sitting area of the lounge.

Empty plates, cups and glasses are generally removed within 10-15 minutes. Plus, the lounge attendants work to wipe down tables as needed and reset pillows and chairs when passengers leave.

The atmosphere and dark polished wood in the JAL First Class Lounge make the lounge feel like a sophisticated country club. It was interesting how drastically the lounge occupancy differed throughout the day, with the lounge almost completely emptying out mid-day.

Granted, the lounge doesn't offer some of the aspects you'd expect from a First Class Lounge, like seated dining from a menu, spa services, nap rooms and personalized attention -- and it does get very crowded at points. Although it's not the most posh lounge around, I always enjoy a visit to the JAL First Class Lounge due to its comfortable working space, fresh handmade sushi, great tasting miso soup and well-equipped shower rooms.