About as Good as Economy Gets: A Review of Japan Airlines Economy on the Boeing 777 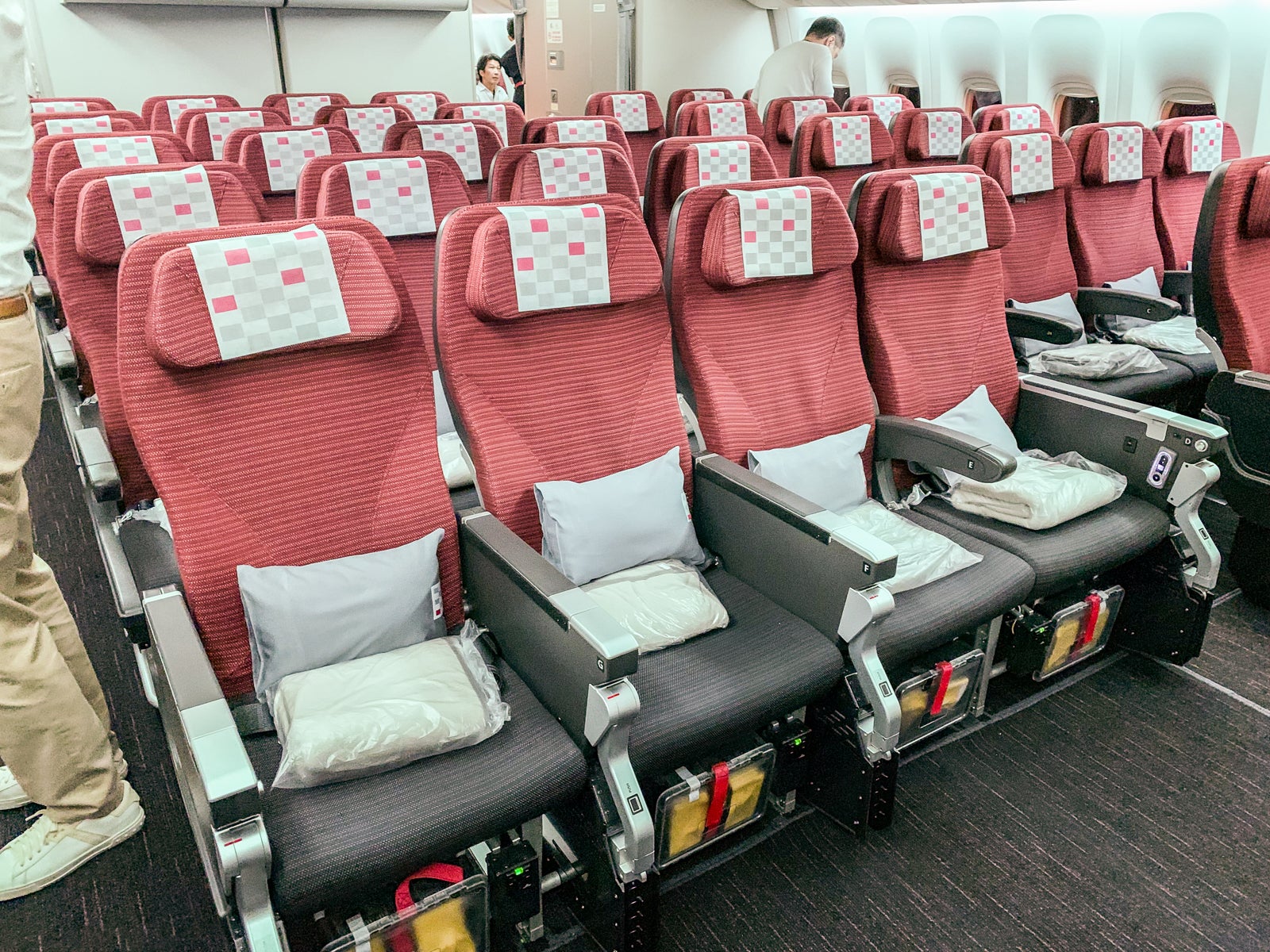 About as Good as Economy Gets: A Review of Japan Airlines Economy on the Boeing 777
This post contains references to products from one or more of our advertisers. We may receive compensation when you click on links to those products. Terms apply to the offers listed on this page. For an explanation of our Advertising Policy, visit this page.

On my recent hop around the world, I found myself in Bangkok without a flight booked back to New York. Before I departed for my trip, I couldn’t find a great mileage option to review, so I waited until two days before my planned return date hoping that an exciting award option presented itself. It did — I booked Japan Airlines (JAL) in business class from Tokyo Haneda (HND) to New York-JFK on the carrier’s flagship 777-300ER (review coming soon). But I still needed to get to Tokyo.

At this point, only economy seats were left on flights from Bangkok (BKK) to HND, and I began to question why I waited so long to book my flight home. I was committed to the JAL business-class flight, so I bit the bullet, booked economy and set ExpertFlyer alerts for business-class space. July 14 clearly wasn’t my lucky day, so read on for my experience on JAL’s Boeing 777-200 in economy.

This was a last-minute purchase without any great redemption options. I ended up paying $782.70 for my H-class ticket, and earned 3,194 American Airlines (AA) miles as a Platinum member.

Had I booked with more advance notice, I could’ve easily found award availability for this segment. Some of the best programs for booking JAL award tickets are Alaska, American Airlines and British Airways. If there were availability, I would’ve paid 15,000, 20,000 and 12,500 miles with each program, respectively.

We’ve also seen some incredible deals on economy-class tickets to Japan, so keep an eye out for those, as it may make sense to save your miles for more exciting awards down the line.

I had a 6pm late checkout from the St. Regis Bangkok, so I headed straight to the airport to allow plenty of time for lounge hopping before my flight. Or so I thought.

The chaos and commotion at the Bangkok Airport began before I stepped foot inside the check-in hall. The airport was packed with people going in all directions. The scene reminded me of Times Square.

I pushed my way to JAL’s check-in counters in the R row, only to find massive lines for check-in. Turns out that the counters didn’t open until 170 minutes before the flight. I had already checked in online, but wanted change my seat to a bulkhead window that was blocked for pre-assignment.

I waited 15 minutes for the counters to open. My patience paid off when I scored an “upgrade” to the bulkhead simply by asking. It really never hurts to ask.

With lines everywhere, security and passport control together took an hour. Once airside, I made a beeline to the JAL Sakura Lounge to decompress after that experience.

I entered the Sakura Lounge located in the D Pier of the terminal using my Oneworld Sapphire status from my American Airlines Platinum membership. Since lounge access isn't ordinarily included with an economy ticket, my experience isn't factored into this section's score.

The lounge wasn’t too crowded when I arrived, but quickly started filling up as it got closer to the evening departures to Japan.

Plenty of beige were scattered throughout the lounge.

The buffet selections featured mostly Japanese options, but with some notable exceptions like fried chicken and scrambled eggs.

There was plenty of self-serve liquor, coffee machines and soft drinks in the fridge.

The lounge was clean and the food presentation looked appealing, but I wanted to escape the crowds, so I made my way to the Cathay Pacific Lounge located just a few steps away on Level 3 in the G pier. Fortunately, the Cathay lounge was empty and was even more stylish than the JAL's Sakura lounge.

If you're looking for a place to work, stick to the Cathay lounge, which is equipped with plenty of iMacs, each outfitted with printers.

There was a limited buffet in Cathay's lounge but the highlight was Cathay's signature noodle bar. I’d definitely recommend parking yourself here when the JAL lounge gets crowded.

After a few too many Dan Dan Noodles, I made my way to Gate F5. Boarding passes were scanned as you entered the gate area, so I technically "boarded" the flight once I entered the gate.

The gate area was incredibly organized -- the first sign of the night that I was flying on a Japanese airline.

There’s not much an airline can do to significantly improve the economy experience, although JAL certainly tried and had a degree of success.

The seats were incredibly clean and looked fresh, especially considering the plane was 16 years old. The 3-4-2 cabin configuration was great for a solo traveler like me, as I could select a seat on the starboard side of the plane and only needed to bother one person when I needed to use the restroom.

I’m not sure why JAL went with such an unusual configuration for their 777s, but it worked for me. I definitely wouldn’t have been happy sitting in a middle seat in the middle section.

Regular economy seats had a 33-inch pitch, while the exit and bulkhead rows had a pitch of 45.5+ inches. The well-padded seats were quite wide at 19 inches, and the recline was generous at 4.5 inches.

Since I was seated in the bulkhead, the armrest was immovable, and my bi-fold tray table measured 15.5 inches wide and 9.25 inches deep.

I appreciated the personal AC power outlet located underneath the seat.

Each seat featured an adjustable headrest that made it easier to sleep on my side.

All six economy-class bathrooms were kept spotless throughout the flight. None were oversized, but I was impressed that they were stocked with dental kits.

There was enough to keep me occupied throughout the 5.5-hour flight. The 10.6-inch touchscreen was very responsive and featured 60 movies and 39 TV shows. JAL could've loaded more TV shows, especially since they only had two episodes of each show.

Bring your own headphones because the ones waiting at my seat were flimsy and of poor quality.

If you get bored, tune in to the in-flight behavior video demonstration. It will help you stay off the Passenger Shaming list.

As an AvGeek, I loved how the in-flight map was fully customizable.

Wi-Fi was available on this flight and only cost $18.80 for 24 hours, which meant that I’d be able to use it on my connecting flight. I found the speeds to be alright for staying in touch with work back home.

When it came time for a power nap, the small pillow and plush blanket were above average. I managed to sleep for about two hours, definitely more than I was expecting on this short flight.

To start, we were offered hot towels and a choice of drinks.

There was an extensive drink menu, and I found the JAL-exclusive Double “O” white wine to be refreshing.

The meal was presented on one tray and featured a main, three side dishes and an optional soup.

I picked at the chicken and rice (there was no choice on the main entrée), but really liked the soba (noodles) drenched in soy sauce, bok choy with peanut sauce and miso soup.

The quantity and quality of the food was above average for economy. Furthermore, as a non-Japanese passenger, I liked how JAL incorporated Japanese and Western menu items into one meal.

This is where JAL really excelled. It felt like the flight attendants were genuinely proud of the product and were happy to serve the passengers throughout the flight.

As a pescatarian, I couldn’t eat the chicken in the main dish (my seatmate enjoyed his). Instead of just clearing my tray, the flight attendant asked why I ate around the chicken, and when I explained that I was pescatarian, she immediately offered to bring me more of the vegetarian side dishes.

The one minor service issue was that the crew prepared the cabin for landing a full 75 minutes before touchdown. Everyone would’ve appreciated some extra shut-eye had the crew waited until descent to prepare for landing.

The ground experience ex-Bangkok left much to be desired, and while I can't fault Japan Airlines for the crowds in the BKK airport, it was certainly the low-point in my journey.

On the flight itself, I had a very comfortable seat with above-average width, pitch and recline. The food was good, the built-in IFE and reasonably priced Wi-Fi kept me entertained and the legendary Japanese service was much appreciated.

There’s only so much an airline can do to improve the economy experience. And JAL did about as much as it could to make me want to fly economy again.