Not Quite as Advertised: A Review of the Hotel Indigo Los Angeles Downtown 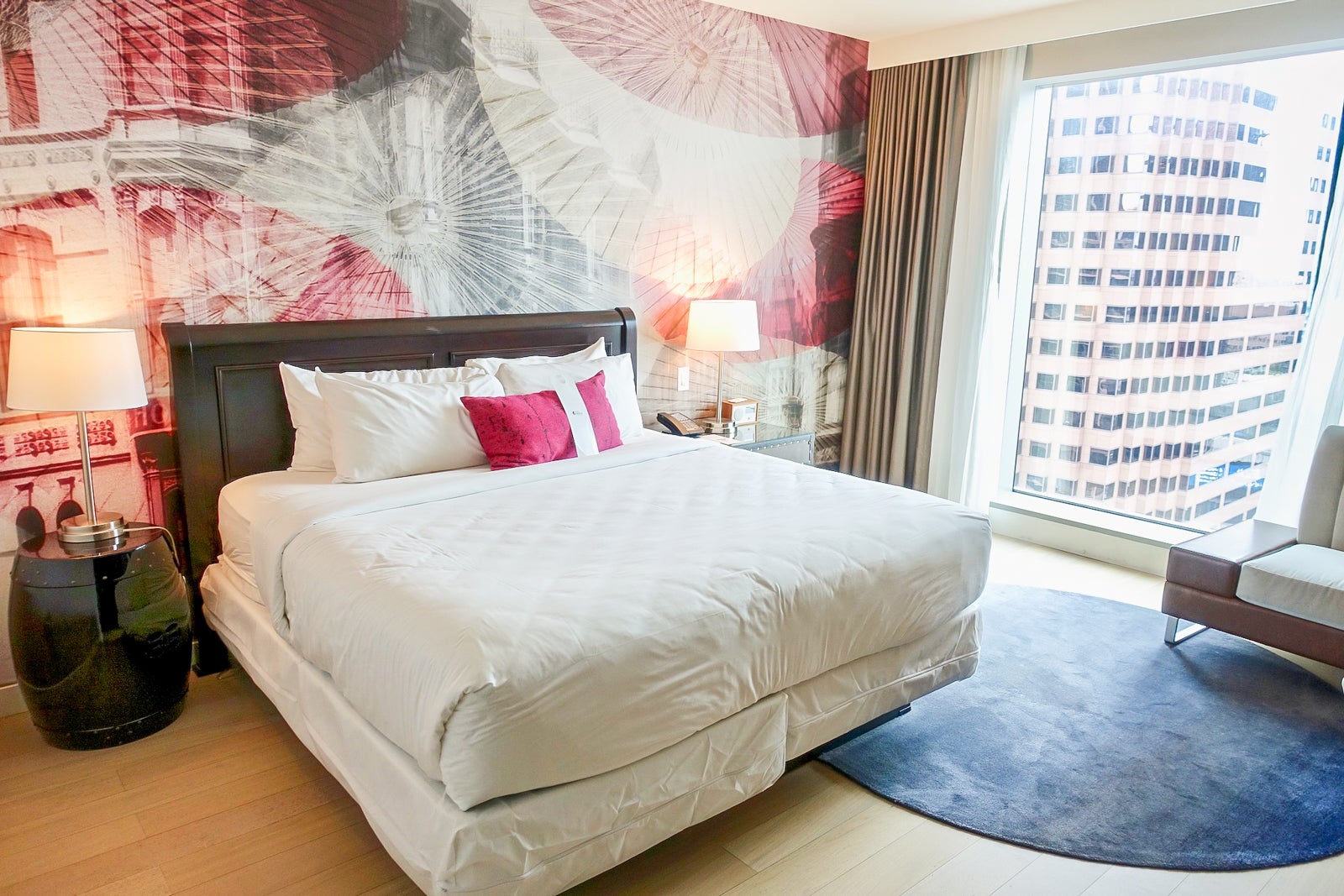 Downtown Los Angeles has come a long way. The formerly rundown area has seen an influx of new developments in recent years, and each major hotel brand is now racing to grow its presence there.

The InterContinental Los Angeles Downtown stole the show in 2017, when it opened in the tallest tower west of the Mississippi. However, that wasn't the only hotel IHG opened in the area that year — it also opened the Hotel Indigo Los Angeles Downtown. Hotel Indigos generally aren't as upscale as InterContinentals, so I was curious how well it would stack up.

Since I’m not an IHG Rewards elite and don’t stay at IHG properties often enough to get status there, the best option was to go through Hotels.com Venture and pay with the Capital One Venture Rewards Credit Card through Jan. 31, 2020 to earn 10x miles on Hotels.com stays.

The Hotel Indigo is in the heart of Downtown LA, normally a 30-minute drive from Los Angeles International Airport (LAX) or one to two hours during rush hour.

LA Live, which is where the convention center, Staples Center, and many restaurants are, was about a five-minute walk from the hotel. Other attractions like the Broad Museum and Walt Disney Concert Hall were a short drive away, but my preferred method of transportation was via the dockless electric scooters that basically littered the sidewalks. Although I had no qualms about my safety while walking around the hotel during the day, things got a bit gritty at night.

Hotel Indigos pride themselves in taking design inspiration from their locales, and I noticed that right when I walked into the hotel. At this location, the design incorporated nods to the Fiesta de las Flores parade, early days of the movie industry, vaudeville glamour and Prohibition-era speakeasies and tunnels. Everything from the floral murals to the theater-like curtains to the towering display of fedora hats had a story behind it.

I arrived at the hotel about two hours before the official check-in time of 4pm but was able to get a room right away. Without asking, the friendly front-desk agent informed me that he'd moved me from a room on the 13th floor to one on the 15th floor in case I was superstitious. The hotel usually charges extra for standard rooms on floors 10 to 15, so in a way, I got a free upgrade ... or so I thought.

The agent also explained how I could text the front desk for any requests. I got a glimmer of hope that I might earn IHG points for my stay when I was asked for my IHG number, but that didn't end up happening, because I booked through a third party.

The hallways on the 15th floor were dark, so the floor-to-ceiling windows made entering to my room more welcoming.

The room's backdrop lent the space a vibrant and fun vibe. However, overall, the room looked far less chic than I expected. A lot of the furniture — the bed, bedside lamps, dresser and wardrobe, just to name a few — were completely different from what was shown in photos on the hotel's website and TripAdvisor. A bed runner was also noticeably missing.

Here's what the room was supposed to look like:

The mattress wasn't very comfortable, and the four pillows were just OK. Although it seems like the beds that were supposed to be in the rooms would have had built-in power plugs and USB ports, that wasn't the case here. Bedside power outlets are a must in today’s world, so not having them in a relatively new hotel was disappointing. After moving some furniture around, I found the power strip that the bedside accessories were plugged into and unplugged the Bluetooth speaker to make room for my phone charger.

Speaking of lack of modern amenities, I was surprised when I saw an air-conditioning unit mounted on the wall. Not only did that cheapen the room, but it was loud. Although there was what looked to be a central air-conditioning vent, it was useless.

Instead of a traditional desk, there was a small, round table with a chair on one side and a chaise lounge on the other.

Fortunately, there were easily accessible power outlets and USB ports by the table.

There wasn’t a minibar, but there was a minifridge and Keurig with vitamin-infused coffee and tea pods. There were no bottles of water in the room, not even for purchase.

The Keurig machine resting on top of the minifridge reminded me more of a dorm room than an upscale hotel.

The bathroom was behind sliding doors (which did not lock) just to the left of the entrance. The vanity only had one sink, but there was plenty of counter space and a large mirror. Jonathan Adler-branded toiletries were provided, and the front desk was happy to send up a dental kit when I requested one via text message.

The shower was a walk-in with a single handheld shower head. The water warmed up quickly, but the pressure wasn't very good.

Opposite the bathroom was a wardrobe that came stocked with a robe, pair of slippers, safe, plenty of hangers and an iron and ironing board.

The room's large windows provided all of the natural light I needed during the daytime. Being on one of the top floors, I was hoping for a good view, but it didn't end up being that special, since the hotel was surrounded by much taller buildings. Thankfully, street noise was never a problem.

The hotel’s restaurant, Metropole Kitchen, was adjacent to the lobby and open for breakfast, lunch and dinner. Its circular passageways evoked the Prohibition-era smuggling tunnels.

The adjacent lobby bar was a popular spot throughout the day. It got especially crowded during happy hour, which was from 4:30pm to 6:30pm and included $4 beers, $5 wine, $7 mixed drinks and a variety of "5 Buck Bites."

I missed out by staying on a Monday or Tuesday night, but there was also a penthouse cocktail lounge open nightly from Wednesday to Sunday. Aside from being on the 18th floor, its name, 18 Social, was inspired by the 18th Amendment, which banned liquor in the early 1900s. It promised sweeping city views and offered a similar happy hour menu as the lobby bar, so I was bummed that I didn't get to check it out.

Back to the ground floor, directly across from the check-in desks was a 24-hour pantry with drinks and snacks available for purchase.

The hotel had room service available from 6am to 11pm. The menu was reasonably priced and included a whopping eight items for dogs. Poolside dining could also be ordered via a phone by the entrance of the pool.

On the fourth floor was the hotel's 24-hour gym and pool. The gym had all of the essentials, along with some nonessentials, like a foosball table.

The views from the pool deck weren't as good as those from the gym, but there were plenty of loungers to soak up some sun.

The pool deck was complete with table tennis, pool table, cornhole and fire pit. Neither the gym or pool got crowded the two times I visited.

The Wi-Fi was free for all guests and fast enough for me to work and stream videos without issue. A speed test showed 5 ms ping, 15.7 Mbps download and 43.9 Mbps upload.

The Hotel Indigo Los Angeles Downtown as a whole was stylish, and I ultimately did enjoy my stay there. However, my room itself looked quite different than what was advertised and lacked modern amenities for a relatively new hotel. I understand that there are hotels where every room is intentionally uniquely furnished, but this wasn't one of them. And while I'm sure the friendly staff would have moved me to another room, I didn't want to go through the hassle of moving, since I was only staying for one night. There are a number of terrific alternatives in the area, so I'll look elsewhere before giving this hotel another try.

Featured image by (Photo by Benji Stawski / The Points Guy)
Editorial disclaimer: Opinions expressed here are the author’s alone, not those of any bank, credit card issuer, airline or hotel chain, and have not been reviewed, approved or otherwise endorsed by any of these entities.