Greek Chic: A Review of the Grand Hyatt Athens 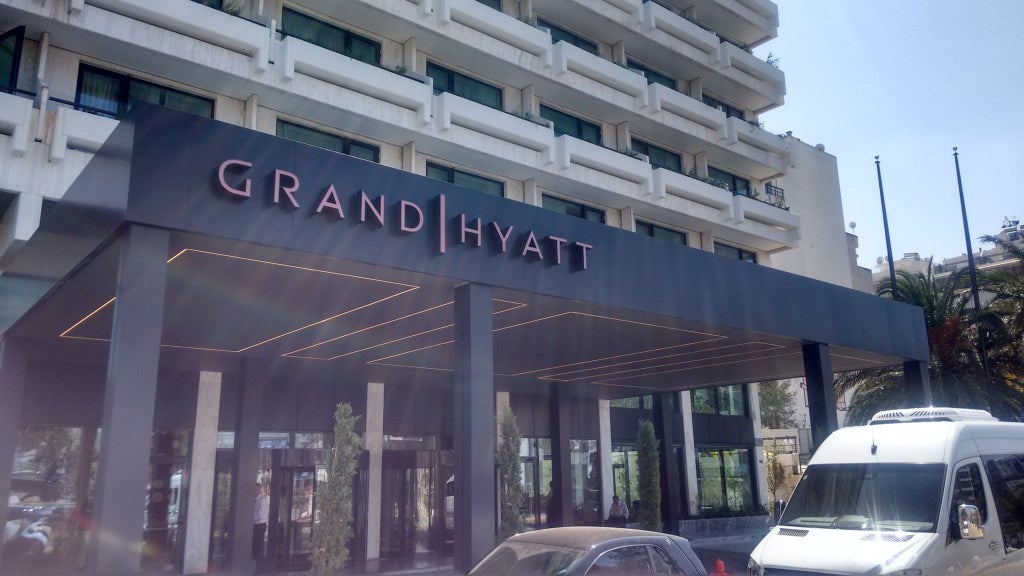 It isn't every day that a prestigious global brand like Hyatt opens a hotel in Greece, so when a property like the Grand Hyatt Athens debuts, it generates a buzz you can hear.

That's especially so in this case because it occupies the building of the fortress-like former Athens Ledra Hotel, which originally opened in 1983, went through brand reiterations and is now a new animal altogether. The Grand Hyatt brand confers an imprimatur of world-class sophistication, and here, in a location that's neither classic nor completely uncool, it pretty much holds up.

When I learned there would be a new rooftop swimming pool with a view of the Acropolis, I knew that I had to dip my toes into this new Hyatt property.

When I began deciding on how to book this property, I noticed that I could take advantage of discounted rates that the hotel was offering for its soft opening in mid-August. My one-night stay cost me a reasonable 124 euros ($145) — and that rate included breakfast.

The Grand Hyatt Athens wasn't yet accepting award bookings (and still doesn't appear to be doing so at the time of this writing), but when it does, this property will be a Category 3 property, meaning it will cost 12,000 World of Hyatt points per night. Since Chase Ultimate Rewards points transfer to World of Hyatt at a 1:1 ratio, it's very easy to get the points required for nights at this property. Just signing up for a card like the Chase Sapphire Preferred Card or Chase Sapphire Reserve (both cards are offering a sign-up bonus of 50,000 points after you spend $4,000 within the first three months of account opening) could get you four free nights at this hotel.

The location of the Grand Hyatt Athens was curious. It was on Syngrou Avenue, which was a bit of a misnomer, as this "avenue" was so wide and cars hurtled up and down it at such death-defying velocity that it was really more like a highway — but one that happened to connect the historic center of Athens with the port of Piraeus. So forget about charm. When I walked outside the front entrance, instead of interesting side streets like in the (touristy) Plaka next to the Acropolis, there was a mix of upscale strip clubs and insurance companies and the roar of Syngrou.

But for anyone whose trip to Greece also had an island component, these coordinates were pretty dope: You could be in a taxi and on your way to that ferry to Mykonos without having to sit through Athenian traffic. And an even shorter taxi ride (under 10 minutes) put you within spitting distance of the Parthenon.

The first thing that struck me about the lobby was the cathedral-like size: high ceilings, thick columns from the original '80s hotel, lots of bright light streaming in from the glass windows, and a glam oversized chandelier. Design was decidedly contemporary, with a nice mix of plush velvet armchairs and sculptural sofas positioned opposite the front desk and near a modern, wall-mounted take on ancient Greek coins.

It was a big hotel — 309 rooms — so the atmosphere was dependent on occupancy. When I arrived at 2:00pm, there was only one other person at the reception desk, and I was handed my key in less than five minutes. But at about the sixth minute, the lobby filled with a busload of tourists, and the hush I experienced upon entering vanished. The staff remained calm under pressure, continuing to work efficiently and smile even as the check-in line got longer.

Acoustically speaking, my only quibble was the same one I have at Athens International Airport: With a musical tradition as rich as Greece's, it's a shame to hear a mix of generic music in a common space that has the potential to rock a more authentic vibe.

I had booked a deluxe king room but at reception was handed a keycard to a grand executive suite instead. I was told that several guests had received upgrades to larger-category rooms because of inventory control issues associated with the hotel's fresh opening — teething problems can be fun!

My room on the sixth floor was opposite the elevator bank, and I had concerns about noise. But those fears were unfounded, as the heavy door blocked out pretty much all noise.

The hallway area did not exactly smell new-car fresh, but I was impressed by the way the carpet was tricked out with a Greek key pattern, and the postmodern torch-style lights were a thoughtful touch.

The room was airy and bright. Blond wood was a predominant feature and a fitting backdrop for the luxurious furnishings.

A heavy glass door opened onto a small private balcony.

From the balcony, over busy and noisy Syngrou Avenue, there was a clear view of Filopappou Hill and the Acropolis. Thankfully, the thick glass shut out virtually all the noise of the cars whizzing by below.

There were two flat-screen televisions, in the sitting area and bedroom, and before setting both to Fashion TV, I noticed there was an electronic welcome note. It might've seemed impersonal, but, hey, if it saves paper, I'm all for it.

I was more impressed by the classy pullout minibar in the front vestibule. At first glance, it seemed to be stocked just with the usual mass-market mini liquor bottles and cans of soda.

But on closer inspection there was a variety of locally sourced Greek products like an ION brand chocolate bar, Greek beer and Yamas peach iced tea with a cool label.

There was also an Illy coffeemaker, but as I have a habit of breaking in-room espresso machines and pods were $3 a pop, I decided to have my coffee elsewhere.

The bedroom had more wide-beamed hardwood floors burnished to a pleasing blond, a motif continuing with the contemporary wood paneling that formed a backdrop to the navy blue headboard.

The headboard was elegantly covered with a fabric that resembled a hybrid of velvet and suede, but whatever it was, it looked and felt both understated and sumptuous and was a good complement to the thick, firm mattress.

The bedroom had a separate door to the balcony and also another one of those cushy armchairs.

As for the bathroom, there was a small one to the left of the entrance area.

But the main bathroom was next to the bedroom.

Marble surfaces were a nice reminder that, despite all the mod cons like an easy-to-use AC and lightning-fast Wi-Fi, you were in the heartland of ancient Greece here. The amenities too were distinctly Greek, a fragrant range called Olive Era.

There were more Olive Era bottles of body wash and lovely hair wash in the marble shower.

The water pressure from the rainfall shower was excellent, and the bath towels white and fluffy.

The only problem was the glass panel, because its open-faced nature meant some water inevitably spilled onto the bathroom floor.

On my way to the gym, I poked my head into a deluxe room. It was smaller, of course, but boasted better artwork. I snapped a quick picture of a digital rendition of an ancient Greek drinking cup by Greek graphic designer Maria-Olga Vlachou.

Breakfast was included, which is pretty typical of hotels in Greece. It was served on the rooftop restaurant on the eighth floor, buffet style (also the norm for larger hotels in Athens). By 10:00am, there was only a half hour to go before the service stopped.

Some of the hot selections looked picked over by then. I can't say that I really minded, because for me a traditional breakfast in Athens is Greek coffee followed by another Greek coffee. With one notable exception (the Greek coffee), my breakfast experience felt more like duty than indulgence.

There was full-fat Greek yogurt, with garnishes like honey and jams on a separate counter.

The marble counter for cold selections was long.

The one for hot selections was shorter.

I was underwhelmed by the selection of breakfast breads.

The coffee was the only exceptional thing for breakfast, at least the morning I was there. It was the same solid quality that I'd enjoyed at the rooftop bar the afternoon prior.

As for other food offerings, they were rote and wildly overpriced (29 euros for a hamburger? And Greece is supposed to be affordable?). It was a missed opportunity. For example, the lobby bar would be a great place for a nibble before hitting sights nearby, but the menu was not especially appealing. Every time I passed by that bar, it looked more or less empty.

The gym was one level below the lobby and about as busy as you would expect for a hotel gym in one of the world's preeminent walking cities.

Well-trained in the subtle art of urban indolence in Paris, I frown on all unnecessary physical exertion in hotels, but I did note that there was equipment from TechnoGym, a quality Italian brand well-liked by muscle masochists of all nations.

In any case, Athenian urban indolence involves an area beach or a rooftop pool, and the one here didn't disappoint. I was impressed to find a shower area in one corner.

I was less happy about small children running around and the presence of more than a few smokers, which zapped the relaxation element up there.

So instead of taking a dip, I chose to hang out at the rooftop bar instead.

Of the rooftop pool areas I've seen in Athens, the one at Grand Hyatt Athens was not just the newest but really the best, both for size and the panoramic city views. But, like the lobby, it was all about when you hit it: You could either have the place pretty much to yourself or feel like you were in a nice-looking but crowded airport lounge.

Not everyone is going to love the location of the Grand Hyatt Athens, because Syngrou Avenue essentially slices the city in two, and to get to classic Athenian neighborhoods like Plaka and Kolonaki you'll need a taxi. But on the plus side, it's an easy place to get a taxi, and excellent if you have an overnight in Athens before or after catching an island ferry from Piraeus.

The hotel itself lives up to its grand name, with tasteful, spacious rooms and large common areas that are nicely furnished and bright but can feel a feel a bit crowded at times. Dining options are more anodyne than amazing, and it would be nice to see some of that local flavor I found in the minibar, but this is a big, chic Athenian perch with friendly service and a killer roof, and it adds up to a solid city experience overall.