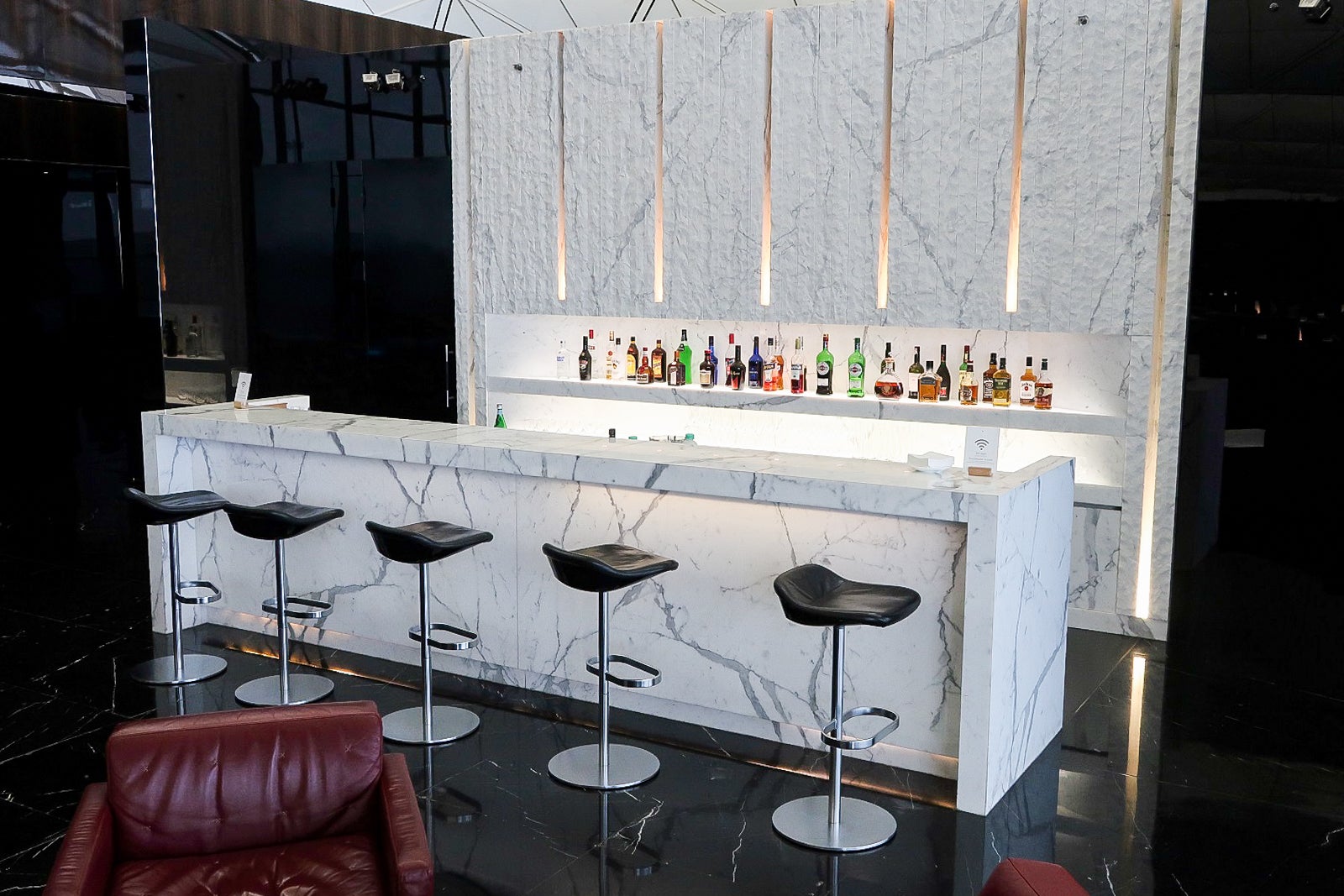 The entrance to The Wing First Class is just outside immigration above gates 1 and 2. Immediately after clearing immigration, take a hard left and walk down a short corridor to the lounge entrance. The lounge is open from 5:30am to 12:30am daily.

If you are transferring in Hong Kong, the main transfer security area near the water-jet connections to mainland China and Macau will drop you near The Wing. But you'll need to backtrack some and make your way up one level after clearing security and being deposited in the departures area.

The Wing First Class is accessible by all Oneworld Emerald elites and first-class passengers traveling on a Oneworld member airline.

There is a separate lounge nearby, The Wing Business Class, that's accessible by Oneworld Sapphire elites and business-class passengers traveling on a Oneworld member airline.

The Wing First Class Lounge was a long, thin, open-air lounge. Although this open-air design allowed you to overlook the terminal and the tarmac, it also meant the lounge was loud with announcements and could become hot in the afternoon as sun streamed in.

I entered an area with seating and a few different types of self-serve sparkling wine. Much of the seating in this section consisted of narrow red chairs, so my recommendation is to grab some Champagne and keep moving.

Walking deeper into the lounge along the railing overlooking the terminal, I passed a work area with a few desks and two computers with printers.

At the far end of this room was a bar with a bartender.

Along the rail overlooking the terminal, I walked past another work area with desks and computers before reaching a dining area. This area had buffet food and seating for dining. During my last visit to the lounge, I found that the bar area overlooking the terminal had power outlets under the counter, and the counter was the perfect height to stand and work on a laptop.

From the dining area, you could transfer to The Wing Business Class Lounge or turn around and walk back though the lounge on the side away from the terminal. Leaving the dining area, I could see The Haven, a sit-down dining room, on the right.

Next were restrooms. On the women's side, there were four stalls with sinks and toilets as well as ample sinks outside the stalls. The entire bathroom was surprisingly dark, though.

Farther down was a large selection of magazines and newspapers on the left. Directly across from the reading materials was a hallway leading to private shower rooms and cabanas.

There are four dual-boot (Windows and Mac) computers with printers in the lounge. I needed to use a printer during one visit and was able to print what I needed within a minute.

Although the lounge remained crowded during most of my visits, the Wi-Fi was surprisingly fast. On one visit, I measured 11 ms ping, 25.09 Mbps download and 9.4 Mbps upload.

I added myself to the wait list for one of the five cabanas during two of my visits to The Wing First Class Lounge. On my first visit, I was informed about 15 minutes later that a cabana was available. But on my second visit, I waited 90 minutes and was never called. When I checked my status before leaving the lounge, the attendant said I was second on the list.

Each cabana had a desk, day bed, shower and bathtub in the main cabana room.

The day bed was great for a quick nap, but the bathtub was a luxury that can rarely be experienced in an airport lounge. The cabanas were large enough for a couple, but there wasn't much privacy, and the day bed was a little narrow for two adults.

The shower had waterfall and handheld shower heads. Amenities like shampoo, conditioner, face wash and body wash were provided.

There was a bathroom stall near the cabana entrance, as well as a two-sided compartment for placing items you wanted pressed while showering. A sign in the cabana asked you to limit your time in the cabana to 90 minutes or less.

The Wing First Class also had shower rooms, if you simply wanted to take a shower or couldn't get into a cabana. Each shower room had a shower, sink area and toilet. The shower rooms had the same two-sided compartment as the cabanas for placing items you wanted pressed.

The shower had two options: a handheld wand and an overhead rainfall shower.

There were various amenities on the counter in each shower room, including a hair dryer, soap, face wash, lotion, a dental kit and makeup remover pads, cotton buds, sanitary bags and disposable cups.

You can order whatever drinks you liked at the bar, but some of the bartenders didn't know how to make basic drinks.

For a quick meal or snack, there was a buffet of light snacks and desserts.

A selection of drinks was available on the buffet.

Adjacent to the buffet, there was a tea and coffee bar. There were 10 teas, and you could obtain a full teapot of any of these teas from an attendant staffing this area.

Entrees could be ordered from a menu, but appetizers and desserts had to be obtained from a buffet at the far end of the dining room.

I tried the ravioli entree during one visit. This entree was disappointing, though, as the pasta was overcooked and tasted more like burnt dumplings than ravioli.

On my next visit, I tried the butter chicken masala. This dish, delivered with mango chutney and rice, was delightful. My only gripe was that the chicken had a few chewy pieces.

I tried a few of the desserts during my lounge visits: an egg tart, bread pudding with vanilla sauce and a panna cotta pudding. The egg tart was my favorite, but the pudding was certainly the most interesting, tastewise. I didn't eat at The Wing during my most recent visits, instead having a sit-down meal at The Pier First Class.

The lounge attendants in both the dining room and lounge seemed overwhelmed during each of my visits. In the main lounge area, used service items usually sat for 30 to 60 minutes before they were removed. Service was even more chaotic in the dining room, where we sat for about 15 minutes before our order was taken on one visit, and other passengers seemed to experience similar waits.

But much of the seating in the lounge feels worn, the lounge is loud with frequent overhead announcements, and the service in the dining room -- ironically named The Haven -- feels chaotic and more fitting of a busy cafe than sit-down dining in a first class lounge.

It feels snooty to compare Cathay Pacific lounges, but based on my many recent visits, I'd hands down rather spend my time in The Pier First Class than in The Wing First Class. The Wing is great for short visits on the way to your gate or if you can snag a cabana and sleep. But for longer visits, head to The Pier for a calmer atmosphere, better sit-down dining experience and quieter spaces to relax and work.