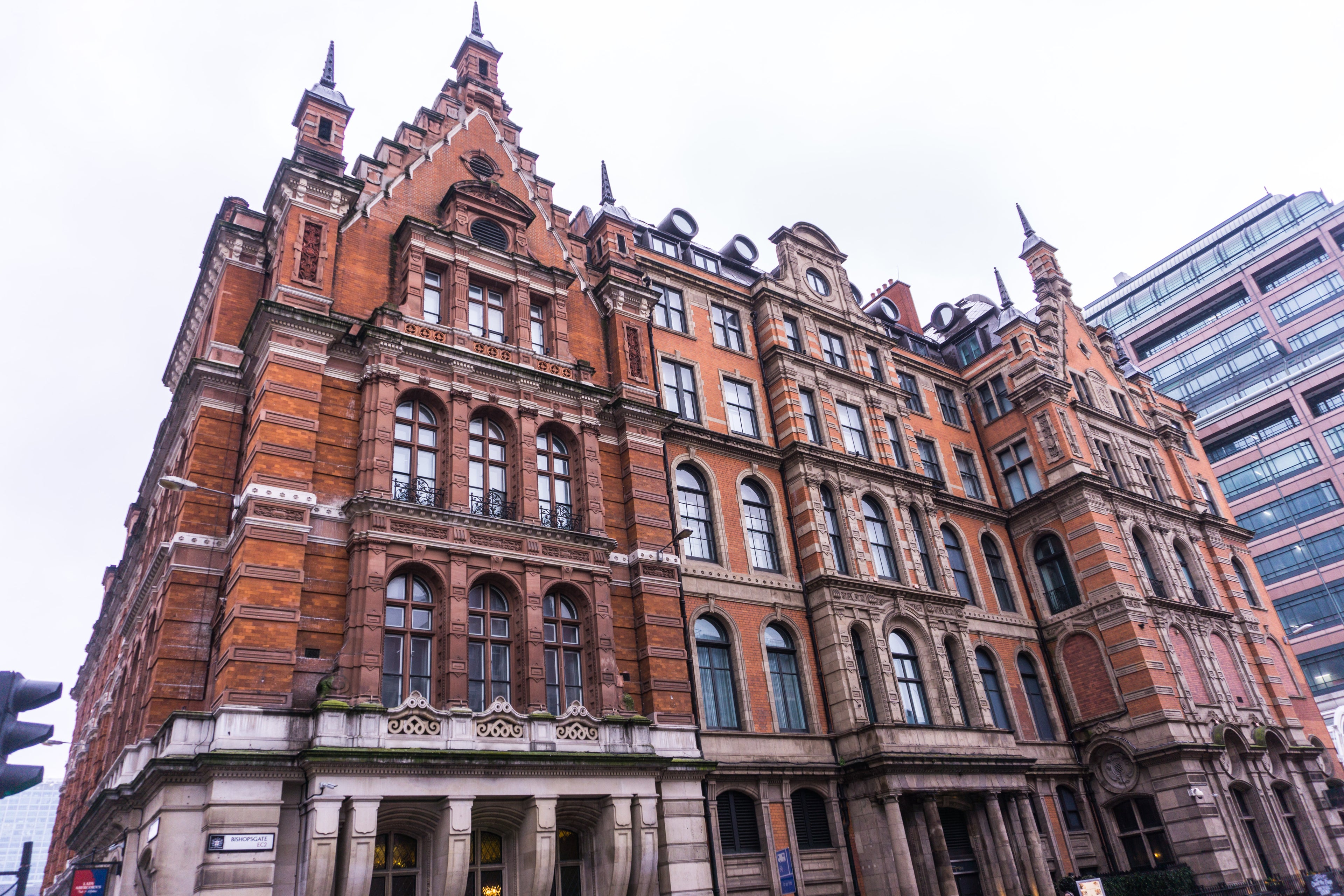 I used to live in London, so Airbnbs are usually my go-to choice for accommodations because they let you get a better feel for a neighborhood and allow you to stay closer to friends.

On this trip, though, I decided to check out the Andaz London Liverpool Street for a night, since I've long wanted to stay at an Andaz property and this particular hotel was close to the hipster hotspots of Shoreditch and Brick Lane. Because of its popularity with business travelers, weekday rates can be over $350 a night, though it is possible to book much more affordable rates for weekend stays.

The building dates back to 1884, when it was the Great Eastern Hotel, and it's steeped in London history, both real and fictional. In the novel "Dracula," vampire hunter Abraham Van Helsing stays at the Great Eastern; today the hotel still houses a hidden Masonic temple and is listed on the National Heritage List. Hyatt took it over in the mid-2000s and completed an extensive renovation on the interior.

When I was looking for a hotel in central London, I came across the Hyatt Prive program, which is a essentially a special rate only bookable by travel agents at Park Hyatt, Andaz, Grand Hyatt, Hyatt Regency and the Unbound Collection hotels. It includes: from $50 to $100 in food-and-beverage credits per room per stay; a one-category room upgrade confirmed within 24 hours of booking (room to room or suite to suite); daily full breakfast for two; early check-in and late check-out, subject to availability; a welcome letter and amenity.

Since I was only looking to book one night, this deal helped me settle on the Andaz, which I found especially valuable considering I didn't have any Hyatt status. The Prive rate for one night was £179 (about $250) with tax included, which I charged to my Citi Prestige card, which has no foreign-transaction fees. Considering I was also getting a $100 credit, a full breakfast and earned 1,045 World of Hyatt points in addition to 750 ThankYou points, I found this stay a pretty great deal.

If you wanted to redeem World of Hyatt points for a stay, each night will run you 25,000 points. Note, too, that Hyatt's a Chase Ultimate Reward transfer partner, so it's easy to fill your account with the points necessary for a free stay at Hyatt properties around the world.

Location is everything in London. Luckily, the Andaz was right outside Liverpool Street station, one of the busiest Tube stops in the city. The hotel was within walking distance of cool pubs, chic cafes, clothing boutiques, amazing street art and the mouthwatering curry houses of Brick Lane. From London Heathrow Airport (LHR), an Uber would have cost about £40 ($55) and might take over an hour in London traffic, while the Tube took about the same amount of time for £5.10 ($7).

The excitement of staying at the Andaz quickly faded at check-in. Consistent with all its other locations, the Andaz used an open-concept check-in with no lines, and customers were served by check-in agents around a bank of computers and on iPads.

What this really meant, though, is that there were about 10 guests scattered around in no particular order while two agents were frantically working to get everyone sorted. As we began the check-in process, I mentioned the $100 credit, which the agent didn't see any information about, though she promised to call our room. She also failed to mention exactly where breakfast would be served or anything about the free snacks and drinks on offer in the lobby. (She did invite us to a wine tasting at 6:00pm that evening in the lobby.) We found out we had been upgraded from a queen to a king room, and after about 20 minutes we made our way up to the third floor.

The room featured street-style art and vintage light switches, which were a nod to the hotel's storied history.

While the shower (no bathtub) looked cool, it wasn't functional at all, as it didn't drain properly, constantly threatening to flood the bathroom. The REN toiletries however, were a highlight, as this boutique brand makes organic skincare products in East London. The bathroom also had dental kits and shower caps. The room opened up to a comfy king bed.

There were a few nice touches, specifically an awesome photo book called "I've Lived in London for 86.5 Years," soft robes and a massive TV, but overall the room felt pretty basic for a supposed five-star luxury lifestyle hotel.

One of the coolest things about the Andaz brand is the free minibar. While it didn't include booze, the fridge was stocked with apple juice, orange juice, sparkling water, still water, Coke and Diet Coke. In addition to tea and coffee, there was a bag of posh potato chips and orange-chocolate-chip cookies in a drawer, above which was a small espresso machine.

The windows of room were slim and didn't get much sunlight, nor did they offer a great view.

After we were in our room for about an hour without receiving a call about the hotel credit, I decided to call the front desk. The agent confirmed that £60 ($85) was added to my account to spend at the hotel's restaurants, which was quite a disappointing exchange rate.

Before our stay, we had received an email from the concierge about any requests and options. When we arrived, the staff brought up personalized cupcakes with my favorite sports team and musical artist, along with a scratch-off map as an early birthday present!

We meant to grab drinks in the pub after dinner with some friends to use our credit, but it closed at 7:00pm on Sundays. I caught a peek of Lady Abecorn's earlier in the day, and it looked cozy.

Our only option in the hotel at around 9:00pm was Eastway Brasserie, which was perfectly serviceable, though nothing really made the place unique. A cocktail ran about £12 ($17), though the servers seemed confused by requests for anything outside of the standard menu.

Before our morning flight out of Heathrow, we made our way to the 1901 Restaurant, which was a stunning venue for breakfast. It was included in our Hyatt Prive rate, but normally cost £28 ($40) per person.

The restaurant itself was the ballroom of the Great Eastern Hotel, and had one of only a few stained-glass domes that survived both world wars in London.

The spread itself was one of the best hotel breakfasts I've had in Europe. The hot section of the buffet included the classics like bacon and eggs, but also had delicious renditions of shakshuka and kedgeree.

There was also a wide assortment of fresh bread and pastries, made-to-order eggs, tea and coffee.

The gym was in the basement below the pub. It was well-equipped, with a true bench press, unassisted squat rack and even knockoff Peloton bikes. There were only two other guests in the gym during my two visits.

Outside of the gym was a locker room with showers and a steam room. While there was no spa, the hotel did offer in-room massages.

In the lobby, there was a small area behind the check-in desks where snacks, coffee and drinks were provided throughout the day. But when we went to make use of the facilities, a staff member told us she would be using it for the next 20 minutes and we would need to wait. This kind of attitude from staff seemed to be consistent at the Andaz — we noticed a similar attitude at check-in, where the people next to us received less attention than they deserved.

In the mornings, there were croissants, fruit and coffee left out for all hotel guests.

On the first floor above the lobby, there was an open area that seemed like it could host events along with a pool table that was free to use.

The facilities and location of the Andaz in London are top-notch. Being right next to the Liverpool Street Tube station makes getting around the city very easy. While the rooms are somewhat basic for a five-star hotel, they are comfortable enough as a base for a business or pleasure trip. The hotel is an interesting mix of a modern brand in a historic structure, and I specifically liked how they did not nickel-and-dime for small bites and beverages.

The service at check-in was mediocre, though, and this was perhaps the best description of our stay. Still, overall, I enjoyed my time here and would be excited to return — for the right price.